No trip to Italy is complete without trying some salumi – the catch-all term for Italian cured meats. You’ll see this word (along with the actual product) everywhere in Italy, but the sheer abundance of different types and styles can be overwhelming. Never fear, our guide to Italian Cures Meats is here to help.

So what exactly are “salumi”? Think of them as Italian deli meats or Italian cold cuts. The word salume (the plural is salumi) literally means “salted meat”.

Though most Italian salumi are made from pork, you can find salumi made from wild boar, deer and even horse. (We’ve told you before, Italians love pork – in all its forms!) Actually, there are hundreds of different kinds of salumi in Italy. Italian cured meats vary based on region, fat content, casing, seasoning and methods of curing.

The umbrella term “salumi” includes all Italian cured meat and can be broken into 3 sub-categories – salumi, salami, and salsicca. True salumi (as opposed to the more general use of the term) are cured meats made from a whole cut of an animal, usually a shoulder or thigh. The most famous of these Italian cold cuts is prosciutto. Salami (singular: salame) are a specific type of salumi that are air dried, smoked or salted and left to age. These are usually what we think of when we see the word “salami” in the states, but can also include soppressata and American “pepperoni” (more on that below). Finally, there is salsiccia, or sausage, which is ground and encased. It is either raw or cooked slightly before serving. This can almost always be considered a subgroup of salami.

Confused yet? It’s okay, there are a ton of choices. And while nothing beats taste testing to learn more about all the different salumi, our guide to Italian cured meats will help you know what it is you’re eating – whether it’s salumi, salami or salsiccia!

We’d be happy to teach you the differences in our Italian Food Tours in Florence and in Rome. But int he meantime, let’s take a deeper look into each category: 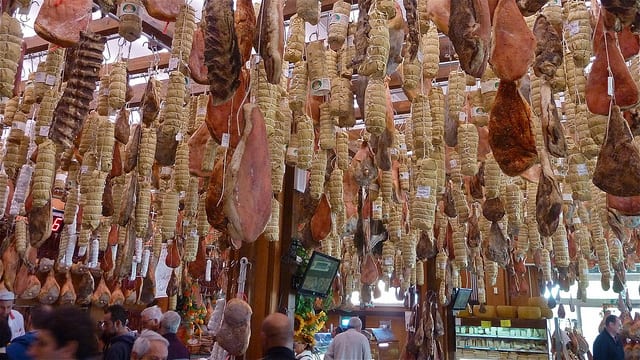 If you love your ham as much as we do, check out our blog on everything you need to know about prosciutto.

Speck is a type of prosciutto, but the flavor is very different. It’s smoked, robust and usually sliced very thin. While prosciutto on a pizza is normal, go for the speck with scamorza cheese to really impress your waiter! Made in Trentino-Altro Adige, the pig thighs are smoked, dry salted and aged 5-6 months to give it its distinct smoky flavor. 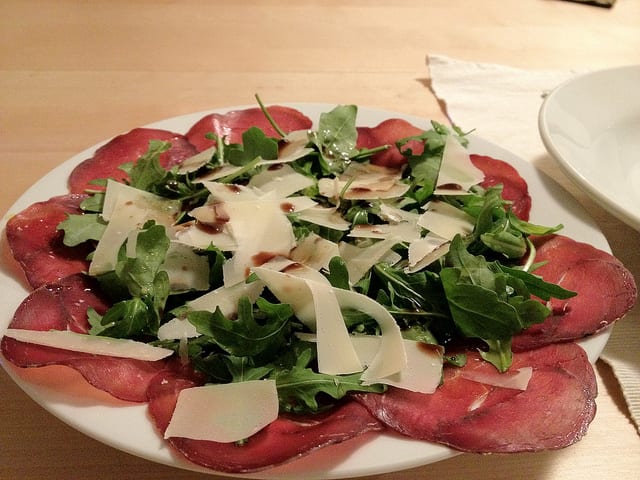 Bresaola is usually served simply. Just a bit of olive oil, grated cheese lemon, and maybe arugula, and you’ll be able to enjoy the full flavors of the deli meat. Photo by Glen MacLarty

Bresaola is a super local cured meat made in Valtellina in Lombardy. One of the few cured meats made of beef, the cut is super lean, with almost no fat at all. Salted, spiced and air dried, bresaola is known for its rich red color. Try eating it simply with a spritz of lemon and a bit of oil to really taste its flavor.

We have “baloney”, but those living in the real town of Bologna have mortadella, a cured bologna-style meat that is worlds apart from supermarket slices of bologna. While baloney can be rubbery, mortadella is smooth and has an authentic taste of pork. It also has huge cubes of lard throughout for flavor. Sometimes, pistachios and garlic are added as well. Mortadella is often eaten as a pre-dinner appetizer.

Pancetta is Italian bacon made from pork belly, cured and spiced with some black pepper. It’s the closest thing to the bacon we know and love, and possibly even more delicious! It’s not usually eaten plain for breakfast. Instead, it’s used to add flavor to favorite dishes. Similar cuts of meat are lardo, which is just pure fat, and guanciale, which is made from pig cheek (guancia, in Italian) and also has a high fat content. High fat, yes, but the Italians won’t ever hold back on flavor!

If any of these meats sound delicious to you, the regions of Bologna and Emilia-Romagna are a must-visit. Read about some of their meaty, mouth-watering specialties in our blog.

Genoa Salami is perhaps the most popular type of salami in the United States. It is very finely ground with tiny flecks of fat visible. Milano Salami is similar, but ground even finer. Actually, there are nearly as many types of salame as regions in Italy. Tuscan salami tends to have larger chunks of fat in it, while spices and herbs liven up other types of salami like fennel salami. 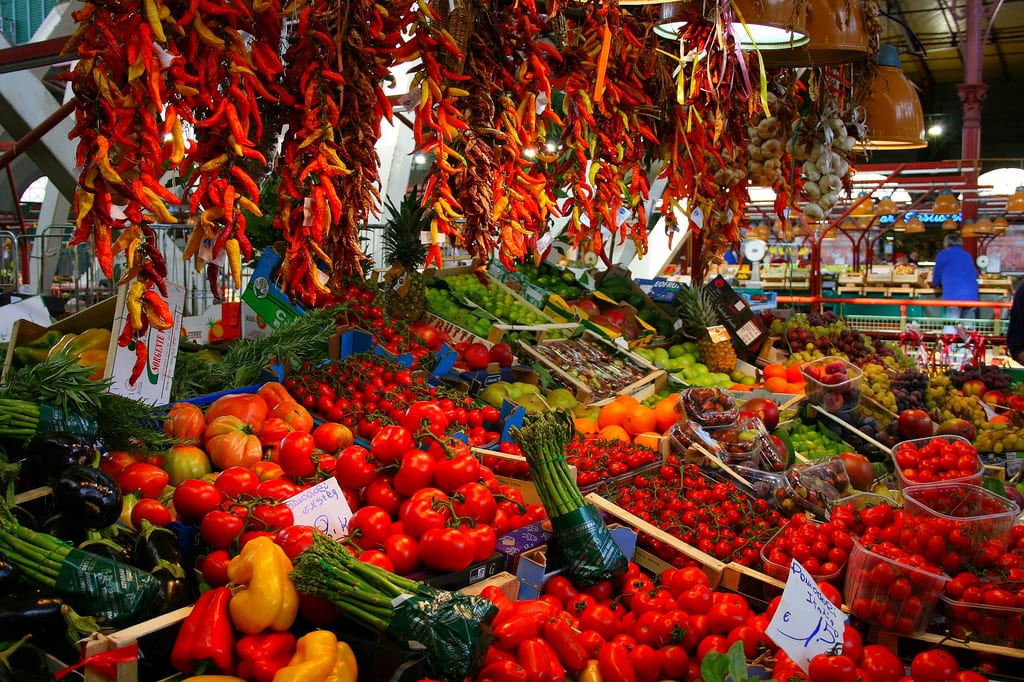 These peperoncini are the reason behind the pepperoni – salame piccante language mix up! They are a key ingredient in some of Italy’s tastiest cured meats.

Salami piccanti (salame piccante, in the singular) are what Americans call pepperoni. Pepperoni in Italian are actually sweet bell peppers, so be careful what you order for your pizza! Most notably made in Calabria, salame piccante is salame spiced with red peperoncino peppers (hence the name mix up).

Nope – that’s not a typo. ‘Nduja is from Calabria in the south of Italy. Pronounced “en-du-ya”, the salame gets its name from the calabrese dialect. ‘Nduja is a spreadable spicy salami made of various parts of a pig, including the shoulder, belly and liver. The most important ingredients, however, are the spicy red peppers that are generously added before aging the meat up to one year. (Can you see a trend with the Calabrese and pepperoncini?) Be careful because ‘Nduja is hot! You can find it in an antipasto spread, in pasta sauces or, of course, on top of a pizza. Check out more of Calabria’s delicious foods in our blog. 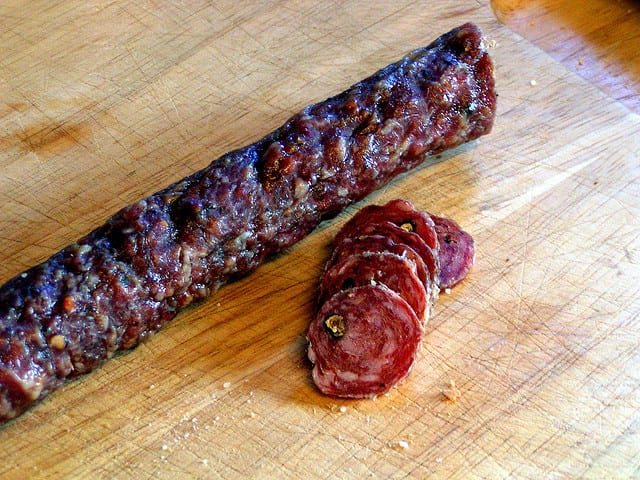 Soppressata comes in different shapes and sizes, but the red color and spicy pepper are staples. Photo by Craig Hatfield

Soppressata is made from a variety of pig parts as well, which vary region to region. Actually, soppressata can be a type of salame, like the types from Tuscany and Liguria, or a type of cured dried sausage, like the variations from Basilicata, Calabria and Puglia. Though spices and seasoning vary, it is most commonly made with red peppers and can be a bit spicy, though not as spicy as ‘Nduja. Usually it’s a bit more coarsely ground than salami, making it the perfect rustic salame to slice down and eat plain with just a piece of bread and cheese.

In order to be considered a Cured Italian sausage, meat has to be ground before it’s encased. It differs from prosciutto and speck, which are made from an entire cut of the animal. In general salami falls into this category, but there are some that can only be defined as sausage. Here are two of our favorites:

Luganega is sausage flavored with fennel seeds and black pepper. You can often find it in risotto recipes, such as risotto alla monzese, made with saffron and savory luganega sausage.

Cotechino is especially popular in Emilia-Romagna and Lombardia. A large cut of raw sausage, it’s usually boiled for hours then mixed in with lentils. This rich meal is traditionally eaten on New Year’s Eve for good luck. If you like the sound of cotechino you can read more about Italy’s regional food in our all-inclusive post, There’s No Such Thing As Italian Food (And What to Eat Instead).

7 responses to “Salumi – A guide to Italian cured meats”

5 of the best sweets, pastries and desserts in Italy, from Sicilian cannoli to...

Eating Fish in Italy: What You Need to Know

When eating fish in Europe, it's important to consider whether the seafood is...

The Definitive Guide to Seasonal Eating in Italy

Eating in Italy is all about following the seasons. Take a look at Walks of Italy's definitive...