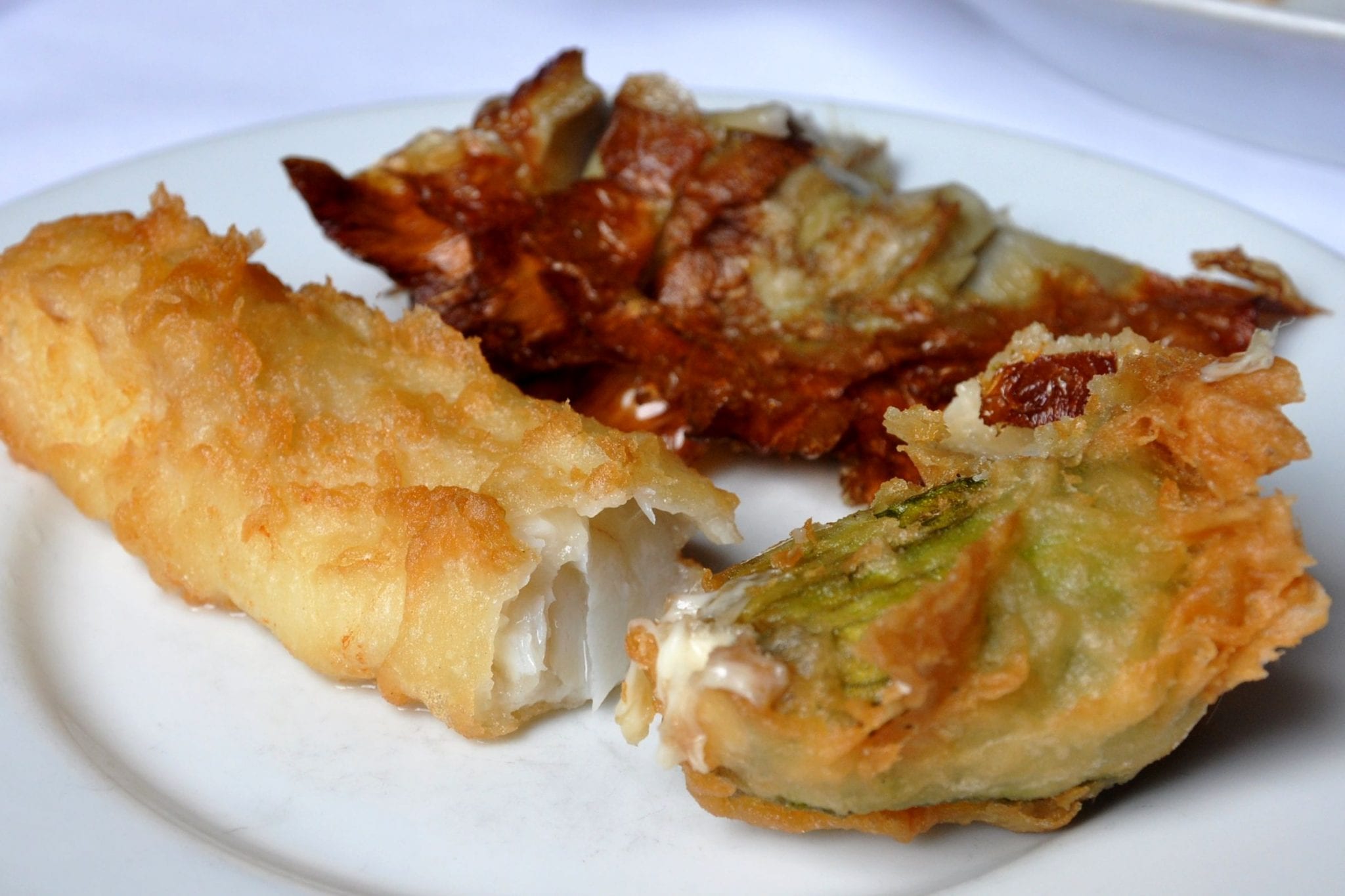 From food to language tips to the best attractions in the country, our Italian travel blog has all the info you need to visit Italy. If you want to delve even deeper, join us on one of our expert-guided walking tours.

If you’re traveling to Rome… then you’ll be eating in Rome! The capital of Italy, you won’t want for delicious food during your trip.

While you’re here, though, you’ll notice that Rome has so many visitors that not all of its restaurants are truly “Roman.” Unfortunately, many eateries cater to tourists, serving up “Italian” food that aren’t fresh, seasonal or even Roman!

So what is Roman food? Here are some of the foods of Rome and the Lazio region that you just have to order.

And to really experience the best food Rome has to offer, don’t miss our Rome food tour! 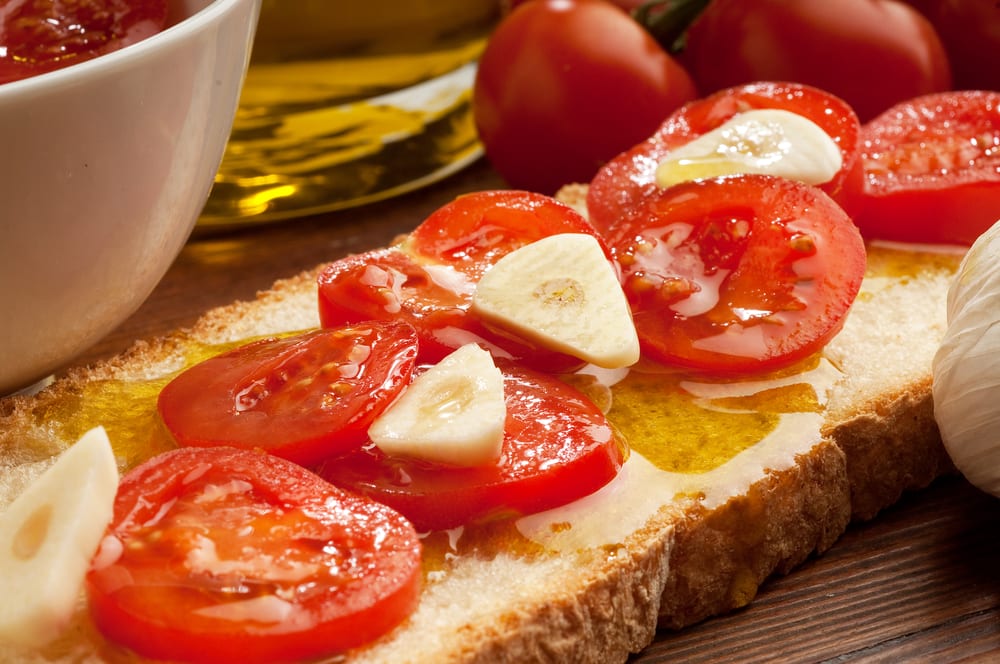 Perhaps it was first invented in Tuscany, perhaps in Rome. Either way, bruschetta today is a staple on the menu of most Roman restaurants. A very simple dish, it’s said that it came about when 15th-century olive oil makers would toast their bread over a fire that they used to keep warm in the winter, then would taste-test their own olive oil on it. Today, the recipe is pretty much the same: A good bread, rubbed with only a bit of garlic (this is not garlic bread… which doesn’t exist in Italy!), and topped with olive oil. One of the most popular varieties, of course, is bruschetta al pomodoro (with tomatoes). Just make sure you pronounce it correctly: it’s “broo-SKETT-ah,” NOT “broo-shet-ah!”

Lazio’s answer to parmigiano-reggiano, pecorino is a cheese made from sheep’s milk (the name comes from pecora, meaning “sheep”). Hard, salty, and delicious, D.O.P.-protected pecorino is the staple of many Roman pasta dishes, and what you’ll often be offered instead of parmigiano. 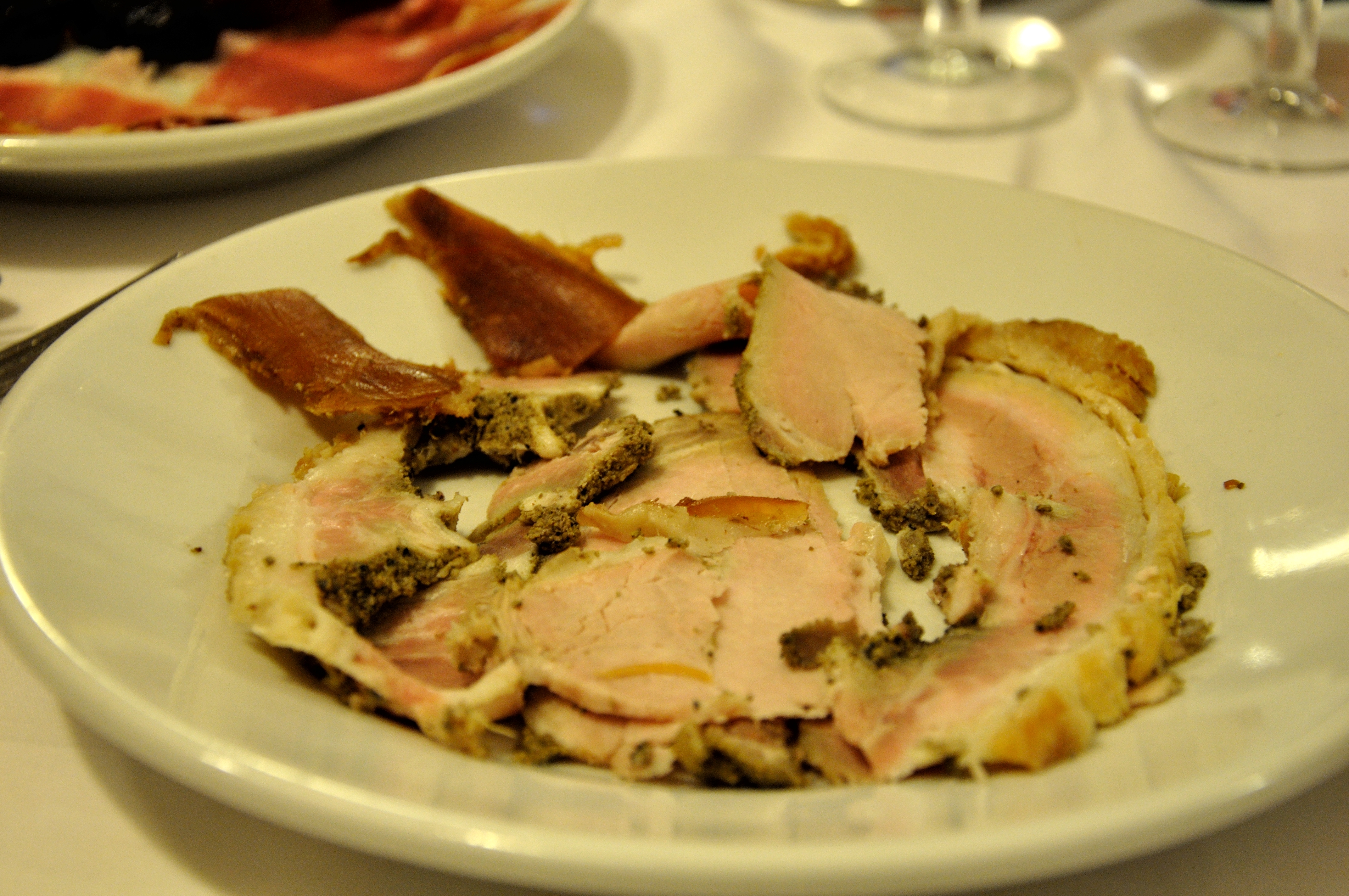 Porchetta, here served as an antipasto in Rome

Not just a food of Umbria and Tuscany, porchetta is also served in Rome; it’s the pork carved from a stuffed, herbed young pig. It’s served either in a panino at lunchtime or as an antipasto option at dinner. 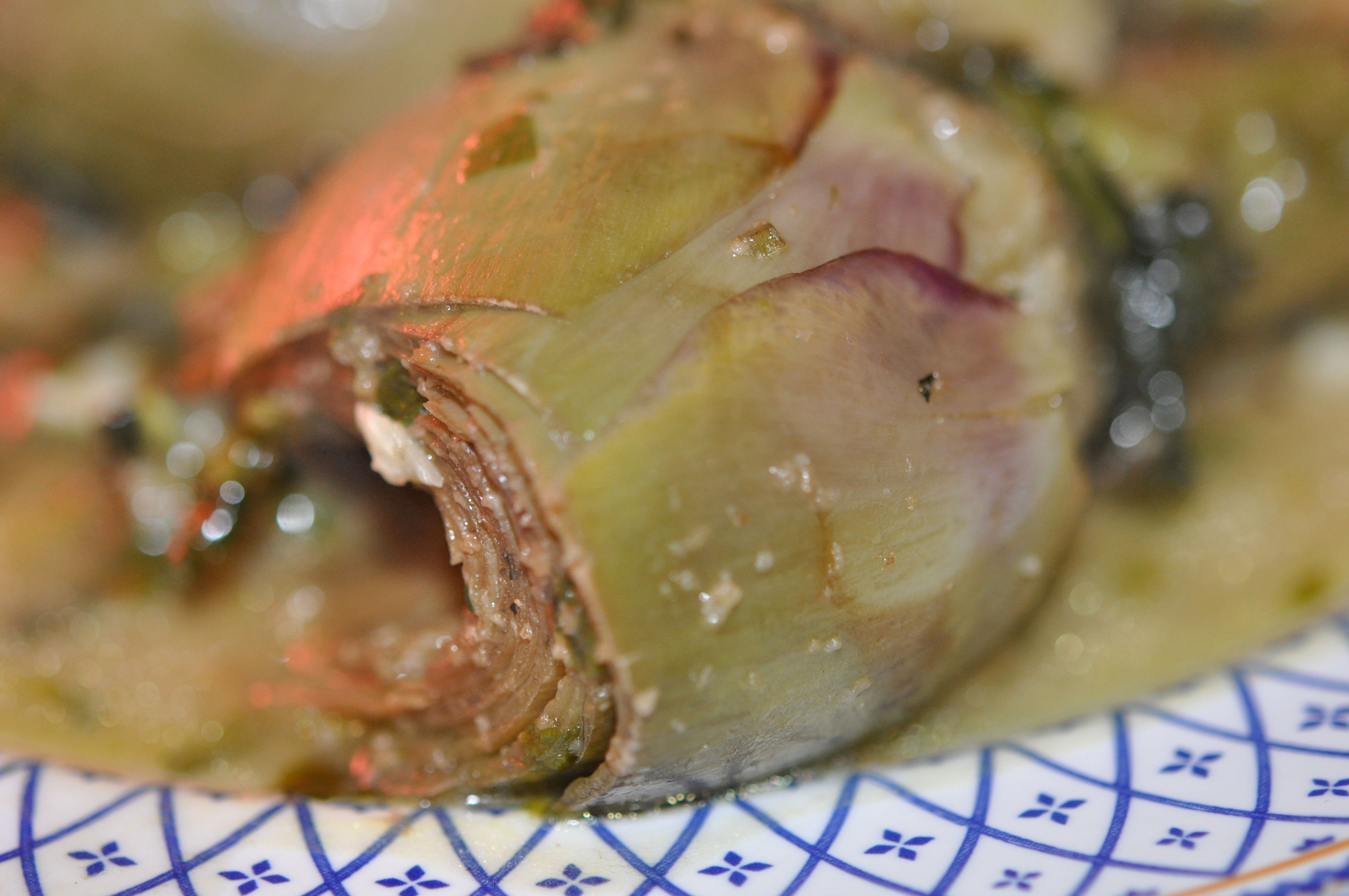 When in Rome, you have to try carciofi alla romana

Artichokes are popular in Italy. In Rome, there are two classic ways to cook them. This way, meaning “Jewish artichokes,” is a recipe from Rome’s ancient Jewish community; it involves frying artichokes to a delicious crisp. For more on the Jewish cuisine of Rome, check out our blog on how Jews invented Roman food. and if you love artichokes then there’s also…

Here, artichokes are slow-cooked so they’re buttery and tender. Even if you don’t like artichokes, try one of these two types. We promise they’re not like the artichokes back home. 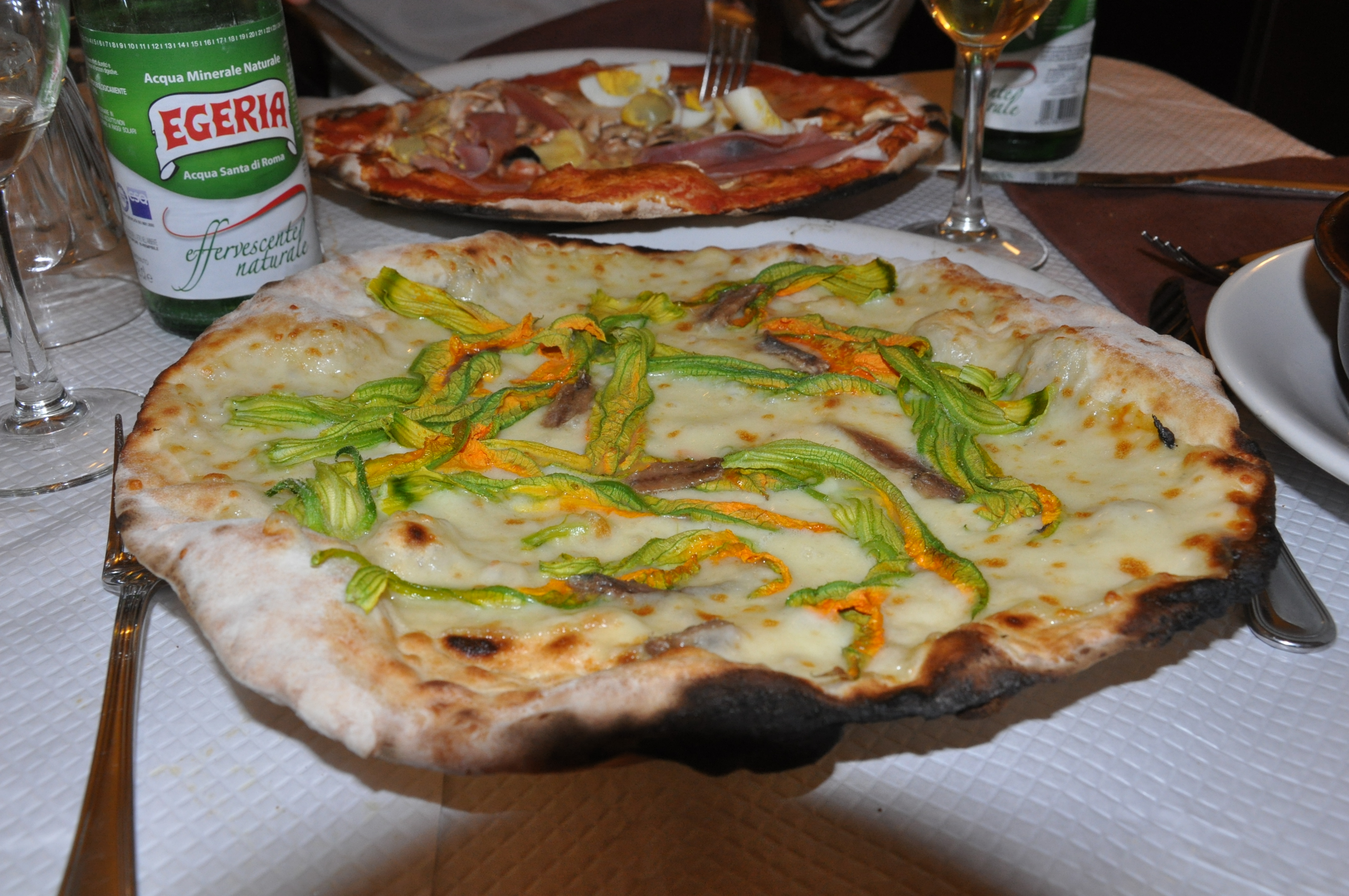 One way to try fiori di zucca? On a pizza!

These are “zucchini flowers,” and they show up in Roman cuisine in all different ways; some pastas will even incorporate them. The most popular (and traditional) way, though, is on the fritti menu as a fried antipasto or a side. That’s when they’ll be stuffed with mozzarella cheese, usually an anchovy or two, and deep-fried.

You’ll see fave, or fava (broad) beans, often on Roman menus. Only order them when they’re in season—the spring. In this popular contorno (side dish), they’re served with guanciale, or pork jowl.

Another typical Roman contorno or antipasto that should be served (and eaten!) only when it’s in season: from November through February. These crunchy green chicory shoots are served as a salad, dressed with olive oil, vinegar, anchovies and garlic. 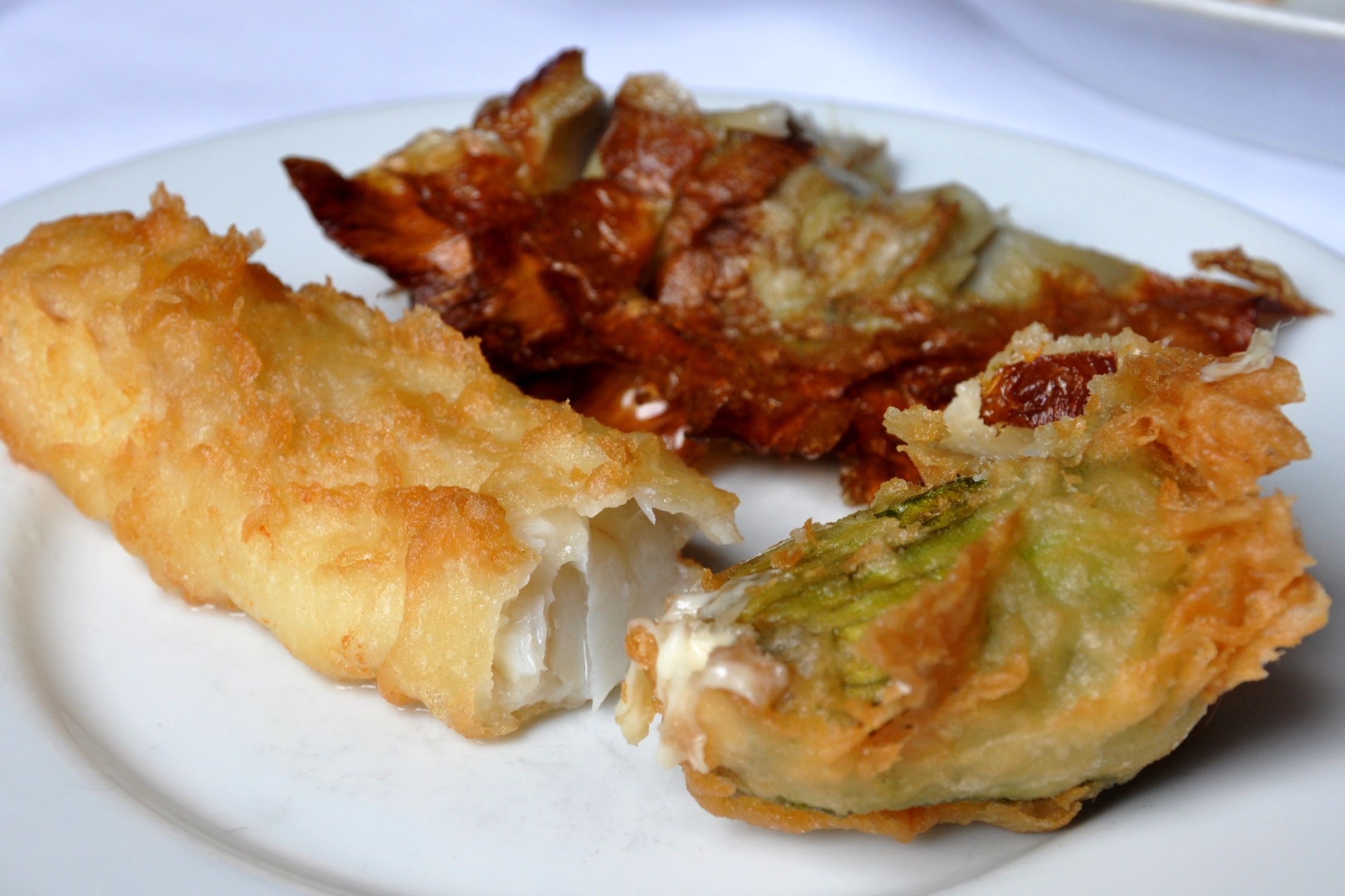 Some of Rome’s best fritti, including baccalà (left) and fiori di zucca (right)

A codfish, you see this prepared many ways in Rome. If you see it on the fritti menu, then the fish is served up fried—as a popular antipasto or a contorno with some pizza.

Of course, you can get pizza Italy-wide—but Roman pizza is among the best. Don’t expect thick, fluffy pizza here; instead, Roman pizza is paper thin, crisp, and always baked in a wood oven.

Usually served on Thursdays, these soft, tasty dumplings are made of semolina and served in sauce.

Meaning “little holes,” this is a long pasta, slightly thicker than spaghetti. And yes, it’s got a (tiny) hole in the center. You can find dozens of varieties of pasta around Italy, but bucatini is most closely associated with Rome. Most trattorie worth their salt will make this themselves, in-house (“fatto a casa”), but always ask to be sure. There’s nothing like fresh pasta! You often see this served with amatriciana or alla gricia (see below).

A thicker version of spaghetti, and another popular Roman pasta.

Pasta with chickpeas. A very old, simple, and delicious recipe. Not only that, but it’s also nutritious! Legumes are often known as the meat of the poor, and this pasta was no different. Served by nonne, or grandmothers, throughout Italy to give a healthy dose of both carbohydrates and protein in one simple, inexpensive dish! 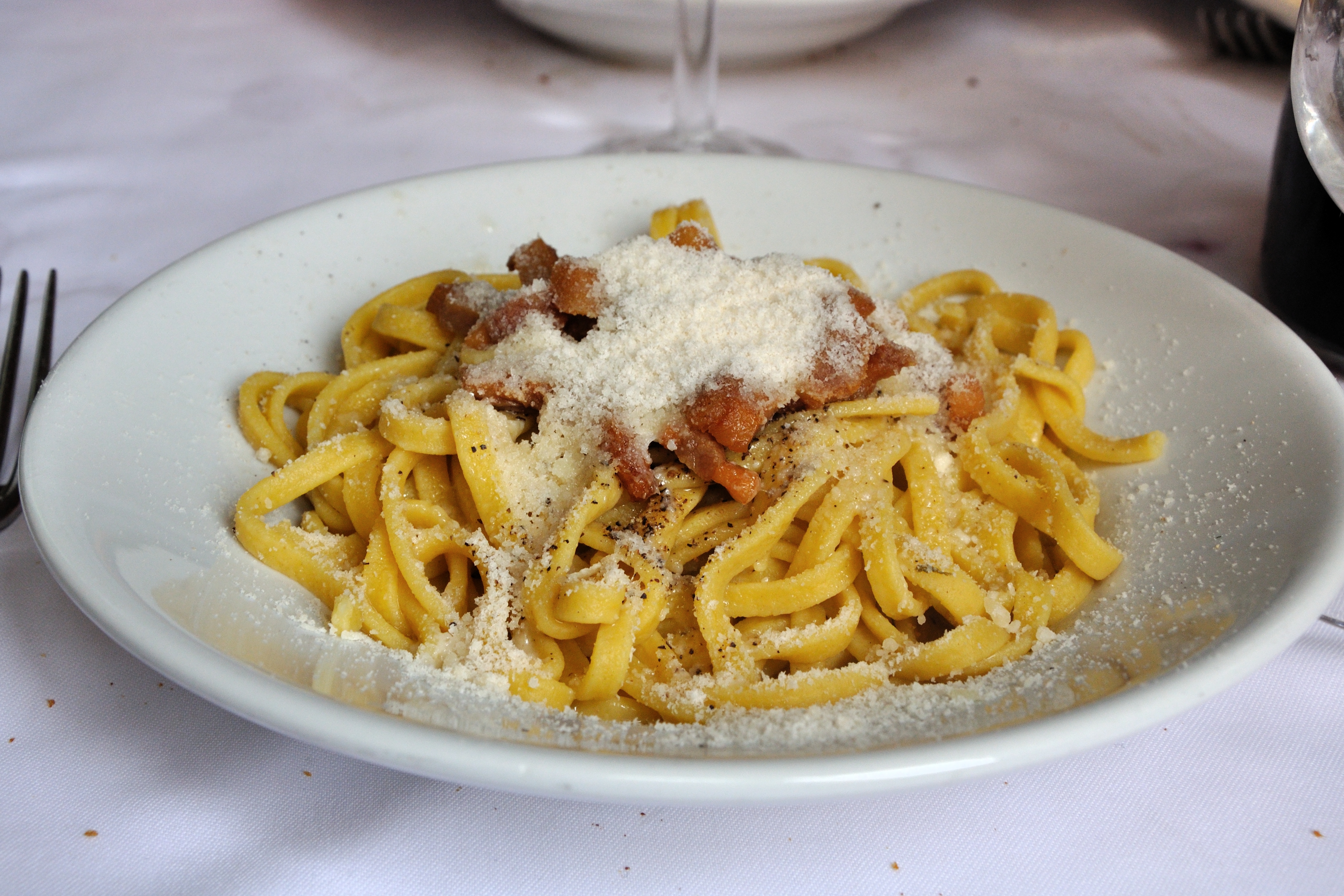 Literally “angry” pasta, this is one for the spice-lovers. It’s a pasta with a sauce of tomatoes, chopped garlic and a lot of peperoncino (red chili peppers)… hence the “angry”!

One of the “holy” Roman pastas, this is a pasta served with grated pecorino cheese, black pepper, and is mixed with some of it’s own boiling water. It’s simple, but surprisingly delicious. Think of it as a spicy macaroni and cheese!

The third classic Roman pasta (of three), this is pasta in a sauce of guanciale, tomato, a little red pepper, a bit of wine, and pecorino. It’s named after Amatrice, the Lazio town that’s said to have come up with the dish. And while the sauce might have a bit of garlic, most frown on there being any onions.

The second of Rome’s most popular pastas, this is not as it’s made back home: Although the sauce is creamy, there’s no cream in it at all! Instead, the proper Roman carbonara is made of diced guanciale, eggs, and either parmesan or pecorino… and that’s it.

(Check out our fun video below to find out more about how the Romans make carbonara!).

A pasta with pajata. What’s pajata, you say? Well, it’s the intestine of an unweaned (read: milk-fed) lamb or calf. Those intestines are cleaned and skinned, of course, but that partially-digested milk, called “chyme,” is left inside. When it’s cooked, it becomes thick and creamy. It’s usually served in small tubes with a red sauce in pasta. And while all of that might sound disgusting, believe us: It’s delicious. This, by the way, is one of Rome’s many cucina povera dishes, food created from offal by people who couldn’t afford anything else. 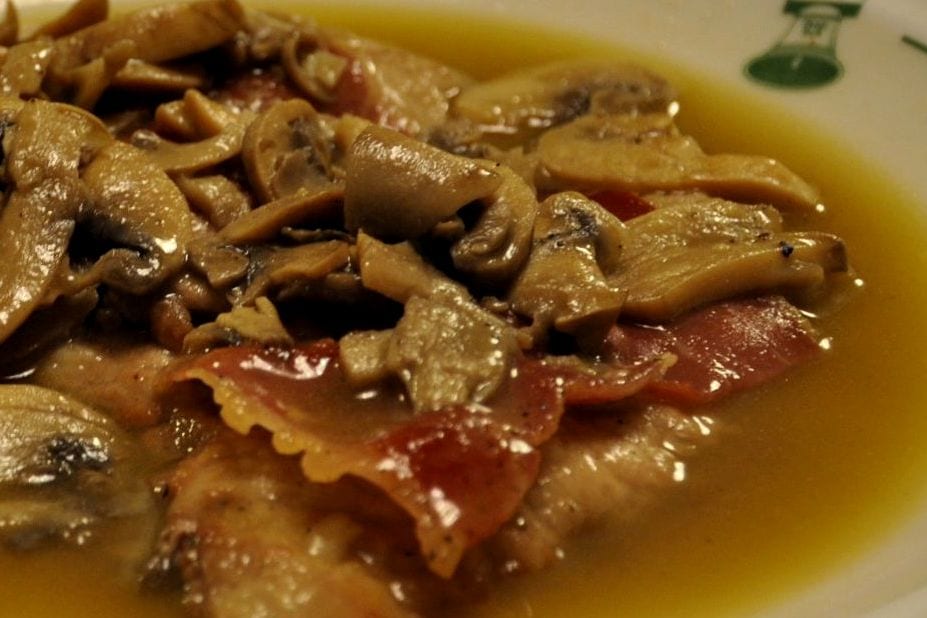 Saltimbocca… doesn’t it look like it wants to “jump in your mouth”?

Veal wrapped in prosciutto crudo and sage, then rapidly fried. So tender and flavorful, the name literally means “jump-in-mouth” in the Roman dialect.

Oxtail, another member of the cucina povera clan, slow-cooked until it falls off the bone and usually served in a hearty tomato stew.

Rolls of beef stuffed with carrots and celery and served in a tomato sauce.

Tripe: Yes, that’s stomach lining, often served simmered and finished with a tomato sauce. The texture is a bit like pasta, and if nobody tells you what you’re eating, you might not even know! A classic Roman dessert, this is a cheesecake made with ricotta. It’s just sweet enough, and often finished with chocolate or a fruit of the season (we love it when cherries are available!).

Want to learn to cook like a real Roman? Check out this video of our fun pasta-making class with a chef in Rome!

Where to Find the Best Gelato in Italy

Six Tips to Know Before You Go to Venice

12 responses to “The Best Food to Eat in Rome”