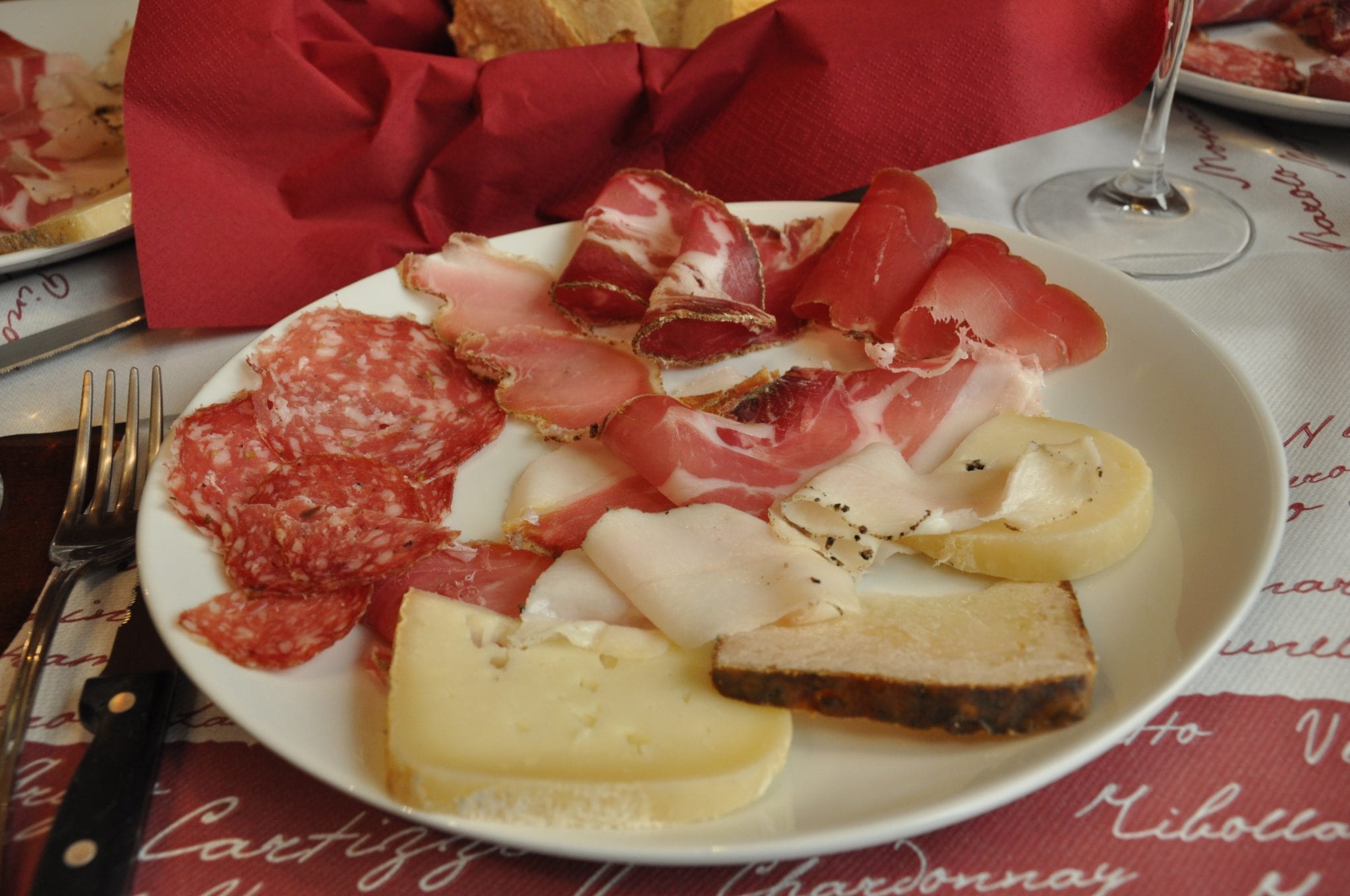 Smack in central Italy, the regions of Umbria and Tuscany—home to Florence, Siena, Perugia, and Assisi—aren’t just beautiful, but boast delicious food, too! Their cuisine is known for being simple, seasonal, and hearty, featuring locally-raised game meats, delicious wines and olive oils, and wild produce like truffles and wild asparagus. There’s also the tradition of cucina povera, where Tuscans made sure not to let anything—including any part of an animal—go to waste.

Some of our top picks for food in Tuscany and Umbria: 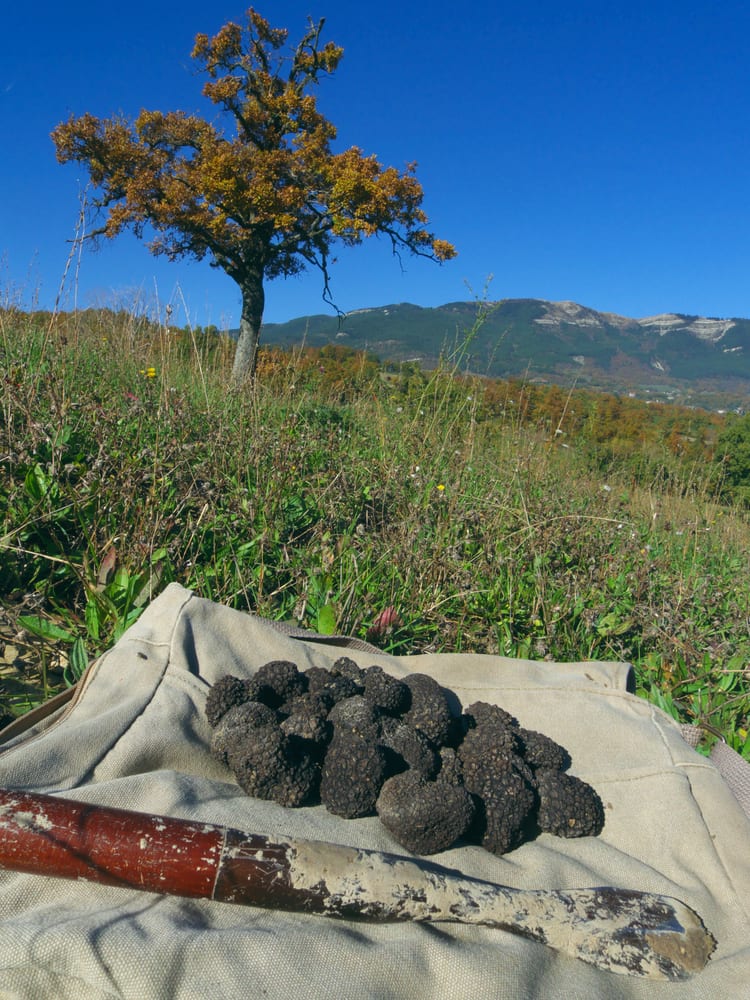 Tartufo. We know “tartufi” as truffles: Found in the wild, these fragrant, earthy mushrooms Umbria’s great (and expensive!) delicacy. Look for them on everything from tagliolini (a thin pasta) to crostini to stuffing, but remember, like every other kind of produce, tartufi go by seasons. Black truffles grow in the wild from October to March; white truffles, October to December. That means that’s the only time of the year you can find them fresh!

Ribollita. A thick, hearty vegetable stew, with its origins in Tuscany’s cucina povera.

Pappa al pomodoro. A Florentine soup with its origins in “cucina povera” (“poor cuisine”), this is a stew of tomatos and (preferably day-old) bread. 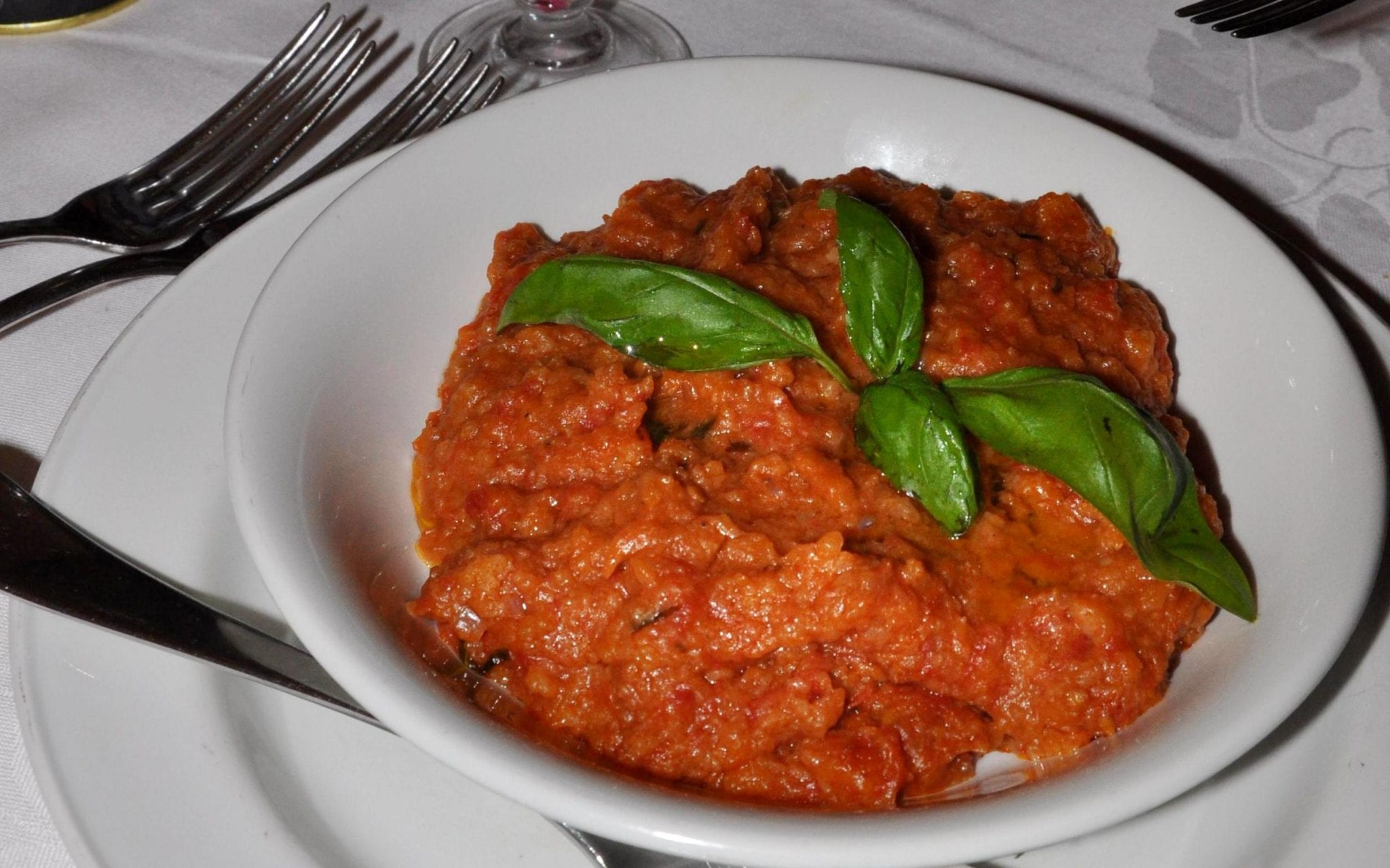 Panzanella. A salad of tomatoes… and soaked day-old bread. (It must be hearty, unsalted country bread!). Originally, this salad was onion-based, not tomato-based. Popular in the summer in Florence. 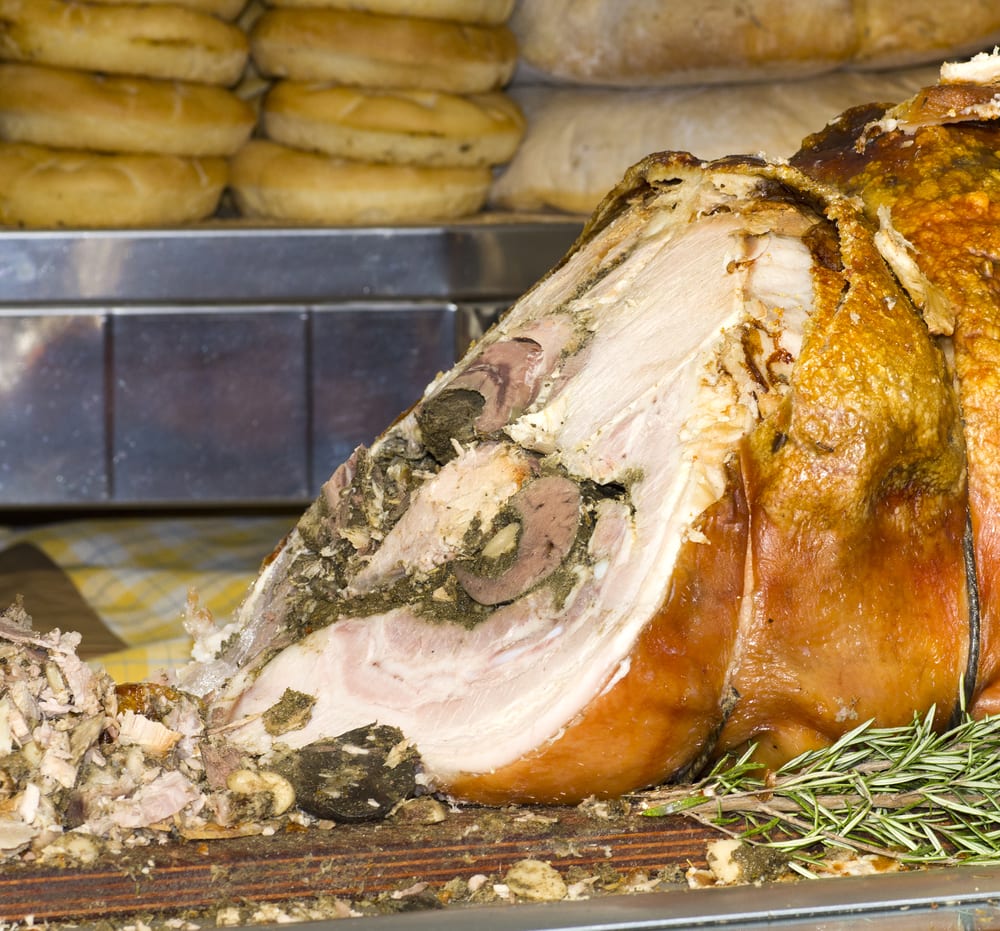 Porchetta, a special pork found in Umbria and Tuscany

Porchetta. An Umbrian delicacy: Pork carved right off a stuffed, herbed young pig. You’ll see this around lunchtime, served on thick rolls as a sandwich, or at dinner, as an option for an antipasto.

Norcino. This word has come to apply to a variety of cured meats, including boar sausages and prosciutto, with one condition: They’re cured in the special, time-tested way that originates in Norcia (hence “norcino”), an Umbrian town famous for its wild boar and other local game.

Lentil soup. In Umbria, this hearty, classic fare has bits of local sausage; it’s also served in Tuscany. Often flavored with rosemary, garlic and basil, and with carrots and potatoes included, too.

Pappardelle con la lepre. Broad ribbons of pasta, served with a meaty sauce of hare, bacon and cloves. A specialty of both Umbria and Tuscany.

Tagliatelle or fettuccine with ragu. You can’t leave central Italy without trying at least one of its ragu variations. It’s nothing like what you find in the States; with little to no tomato, it’s made from simmering down minced veal or pork (or both) along with carrots, onions, celery, and lots of spices, maybe even some tartufi! 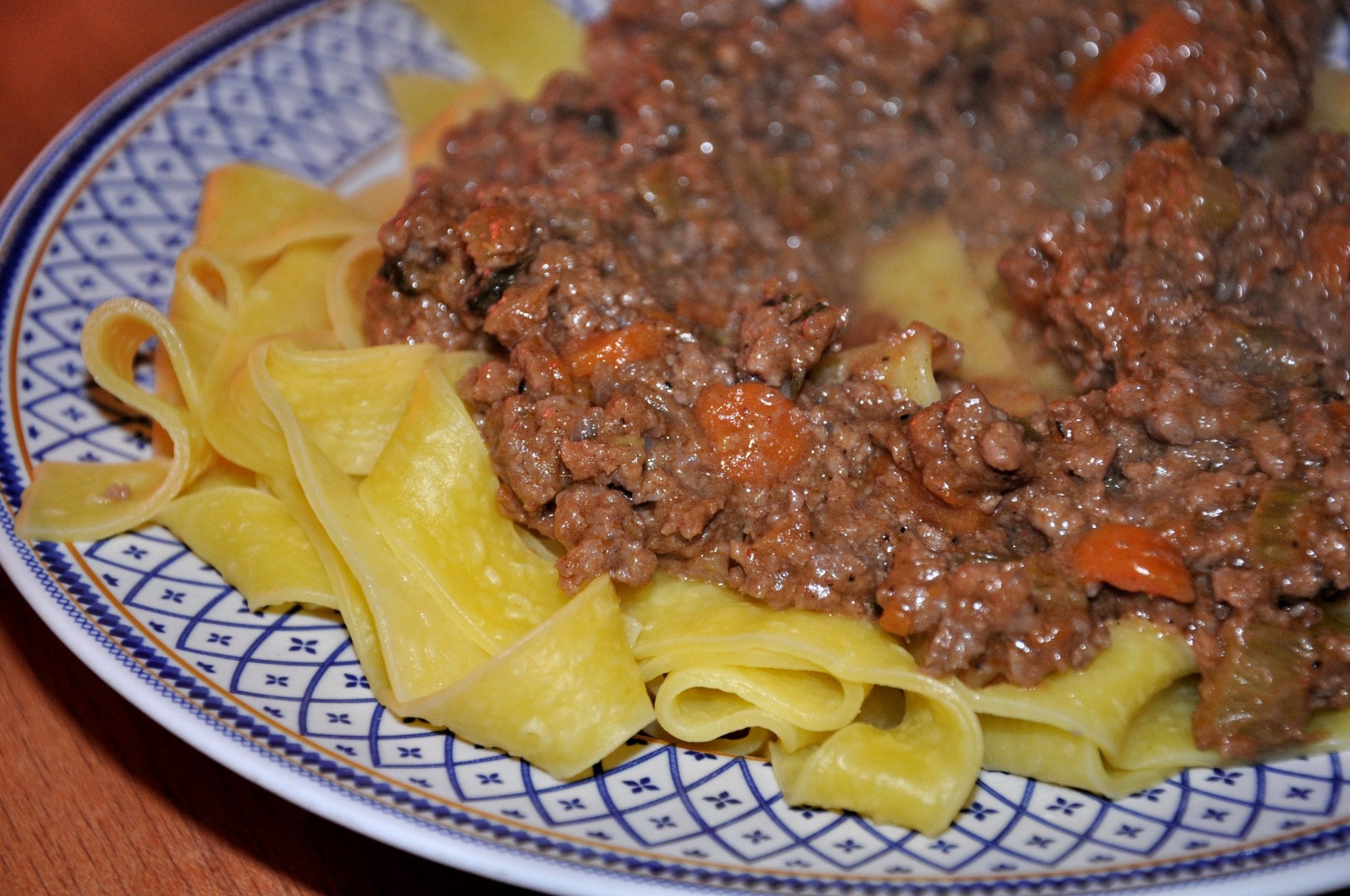 Gnocchi ignudi. A Florentine gnocchi made of spinach, eggs and ricotta in a flour dumpling.

Cieche alla pisana. Feeling adventurous? Then go for these baby eels, quickly sauteed with eggs and served with parmesan. Originally from Pisa.

Cinghiale. Wild boar, hunted in both Umbria and Tuscany, is often eaten over pasta as a sauce or as its own secondo. Gamey and delicious.

Bistecca alla fiorentina. A T-bone steak grilled on a wood fire, done nowhere else quite like it is in Florence! 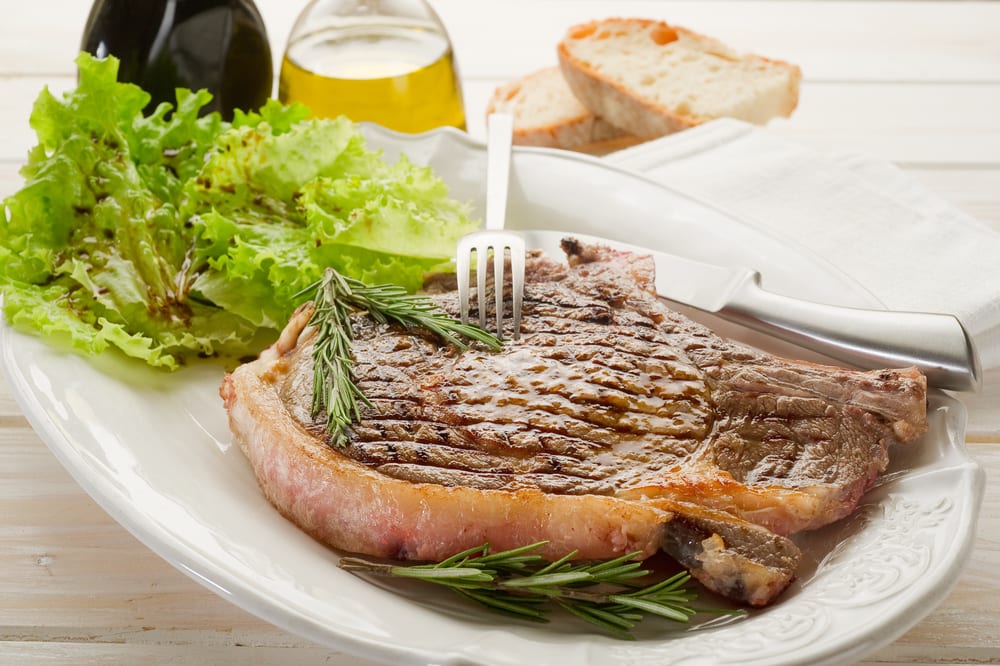 Cacciucco del Casentino. Also called cacciucco di terra or di carne, this dish — from Casentino — dates back to the Middle Ages, if not earlier. Mixed meats, including everything from veal to rabbit to pigeon, are cooked in a broth of red wine, onions, celery, carrots, garlic, basil, parsley, and lemon… and served, of course, with thick Tuscan bread.

Gallina ubriaca. This literally means “drunken hen” — and that’s what it is! Popular in the area around Orvieto, the secret of this dish is soaking a chicken in lots of good Orvieto wine.

Arista. Roast pork loin with rosemary and garlic, a specialty of Florence. Castagnaccio. A dense cake made out of chestnut flour, found in Tuscany and Umbria.

Fichi Girotti. The Umbrian town of Amelia has been famous for its figs since ancient times. In the 19th century, a nationalist commander named Antonio Girotti started filling the figs with toasted almonds, candied fruits and cocoa, and pressing them into wheel shapes. These sweet candies are still popular today.

Panforte. Another popular Christmas cake with candied fruit and peels, this one flat and dense. A particular specialty of Siena.

Finally, the backbone of so much of Tuscan cuisine… is olive oil! Don’t miss our fun video on making olive oil in Tuscany, below.

Want to know where to go in Tuscany? Here’s our list of the top ten Tuscan towns!

9 responses to “Foods to Eat in Umbria and Tuscany”