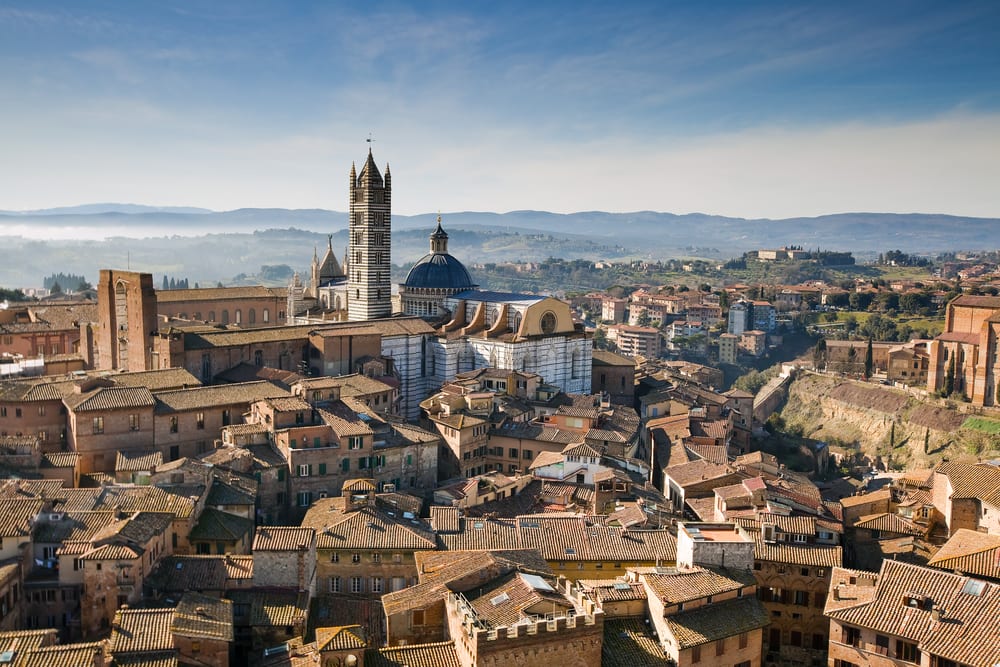 What To Do in Siena… in Pictures

Siena, Italy is stunning… and couldn’t be a better destination for your trip to Italy. Located right in the heart of Tuscany and surrounded by the renowned Chianti wine region, the medieval city of Siena makes the perfect day trip from Florence… or a great place to make your home base while exploring Tuscany.

And it’s not only beautiful: from its splendid Duomo to the spectacular shell-shaped Piazza del Campo, Siena also boasts a lot to see and do! Here are seven of our favorite things to do in Siena—in pictures! Looking down at Siena’s Piazza del Campo, home of the world-famous Palio!

Don’t miss this unique, shell-shaped piazza, Siena’s main square and the heart of the medieval city. It’s divided into nine sections (like pie slices), and symbolizes the ruling Council of the Nine, which commissioned it during their rule of Siena from 1292 to 1355. 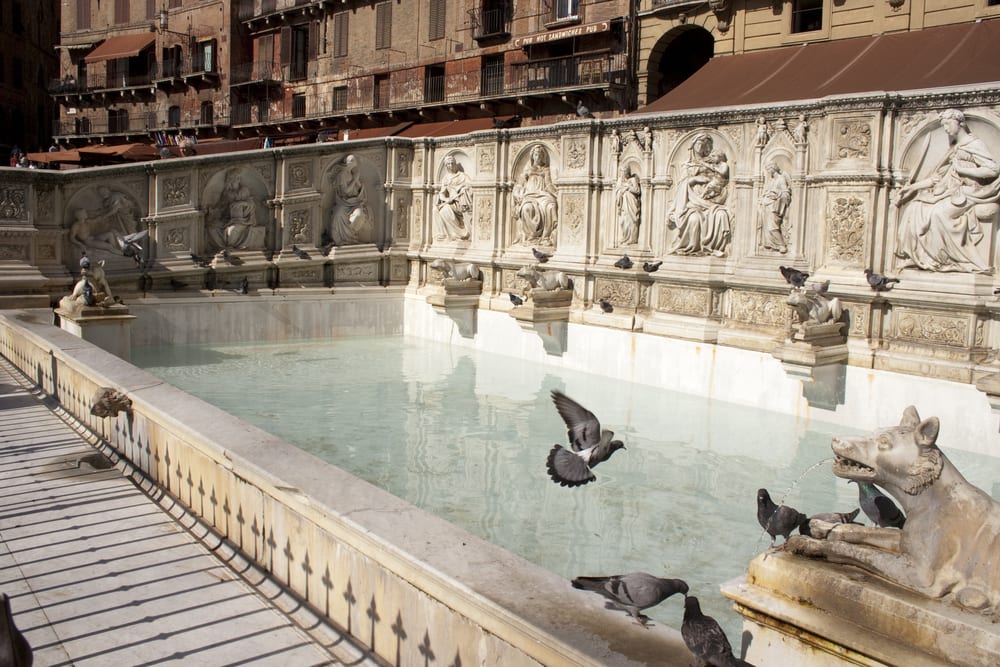 The Fonte Gaia, one of the loveliest fountains in Siena

While the Palazzo Pubblico and the soaring bell tower, Torre del Mangia, are bound to awe you, don’t forget to make your way to the northeast section of the piazza for the Fonte Gaia (Fountain of Joy). This is a replica of the beautiful marble fountain created by Jacopo della Quercia in 1419. (The original fountain—now severely weathered—is housed in the museum complex of Santa Maria della Scala). Enter the palazzo to explore the Museo Civico’s opulent rooms and artwork. And don’t miss the building’s world-famous frescoes, Ambrogio Lorenzetti’s “Allegory of Good and Bad Government,” in the Sala della Pace. Commissioned by the Council in the 14th century, the frescoes depict a city at peace on one wall, and a city in ruins on the other—making them a symbol of the early Renaissance approach to government. The fresco of “Good and Bad Government” in the Palazzo Pubblico The Torre del Mangia dominates Piazza del Campo… and is worth a visit in its own right!

A climb of over 400 steps may sound daunting… but you’ll be well-rewarded. From the top of the tower at Piazza del Campo, you’ll be treated to a splendid view of the piazza, Duomo, Siena, and the countryside.

Funnily enough, the tower was named after its first guardian, Giovanni di Duccio. He was better known by his nickname “mangia-guadagni,” which refers to a person who wastes money; in fact, he was known to have spent all his earnings eating in Siena’s taverns!

For information on the opening hours and ticket prices for the Museo Civico and Torre del Mangia, visit Siena’s official website. 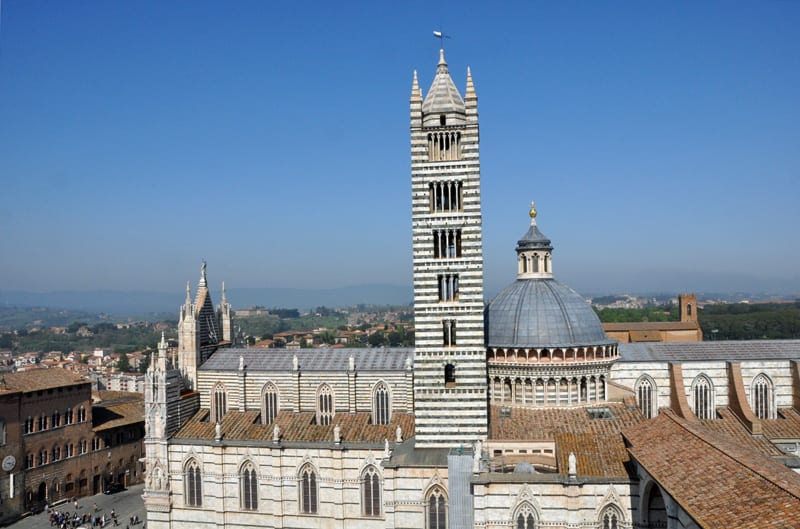 The Duomo of Siena, one of the city’s must-see sights 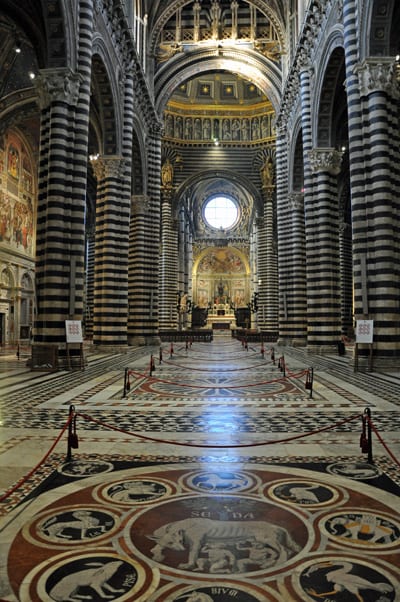 If you think Siena’s Duomo is beautiful from the outside… wait till you see it from the inside!

Siena’s striking Duomo, with its unmistakable white and black marble façade, is one of the finest examples of Italian Gothic style. But what lies within is even more magnificent, including works of art by Bernini, Michelangelo, and other stars of Italy’s Renaissance.

Our favorite part of the Duomo, though, might just be its sweeping mosaic floor panels. Laid from 1369 to 1547, they depict biblical and historical scenes in stunning, elaborate detail. Usually kept covered to protect them from foot traffic, they’re revealed only a few months a year; in 2013, the mosaics will be on display from August 18 to October 27th. Among one of the oldest is a she-wolf suckling Remus and Romulus, the symbol of not only Rome, but Siena (pictured at right): Legend has it that the town was founded by Senius, son of Remus.

Another must-see sight in the Duomo is the Piccolomini Library, with its vivid frescoes representing various important stages of the life of Pope Pius II. And don’t miss the Museo dell’Opera, the Baptistery, and for more splendid views of Siena, the unfinished “Duomo Nuovo,” all of which you can access on the combined Duomo ticket.

Here is more information about the opening hours and ticket prices for the Duomo and its related sights. The 13th-century Basilica of San Domenico, a must-see in Siena

This huge, imposing basilica, built in the Gothic style by the Dominicans in the 13th century, rises above the Valley of Fontebranda, the neighborhood associated with St. Catherine, one of Italy’s two patron saints. Don’t miss the Chapel of the Vaults with its fresco of St. Catherine by Andrea Vanni, the only portrait of the Saint painted when she was alive.

What most visitors come here for, though, is the Chapel of St. Catherine… where the remains of both the head and thumb of St. Catherine are displayed on the magnificent marble altar.

One of the oldest, most impressive fountains in Siena, Fonte di Fontebranda, situated right under the Basilica of San Domenico, resembles nothing so much as a small fortress! The façade, with three arches, is adorned with four stone lions. In the past, each basin served a purpose: one was for drinking water, another for animals to drink from and the third, a washtub. The fountain was so fundamental in Siena’s water supply, it even was mentioned by Dante in the 30th canto of his Inferno. Gems of art and architecture might draw most visitors to Siena. But the food does, too!

The most well-known pasta of Siena is pici, made from water and flour, and usually served with a simple tomato and garlic sauce (a dish called pici all’aglione). Those with a sweet tooth will be in for some treats such as panforte, a dense spiced cake with honey, mix nuts, dried fruits and spices, and ricciarelli, oval-shaped, light, fluffy cookies with a base of ground almonds, egg white, and honey. To get a taste of these sweet treats, make your way to Pasticceria Nannini (Via Banchi di Sopra, 2) which has been around since 1906. (Here’s more on what to eat in Tuscany!).

4 responses to “What To Do in Siena… in Pictures”