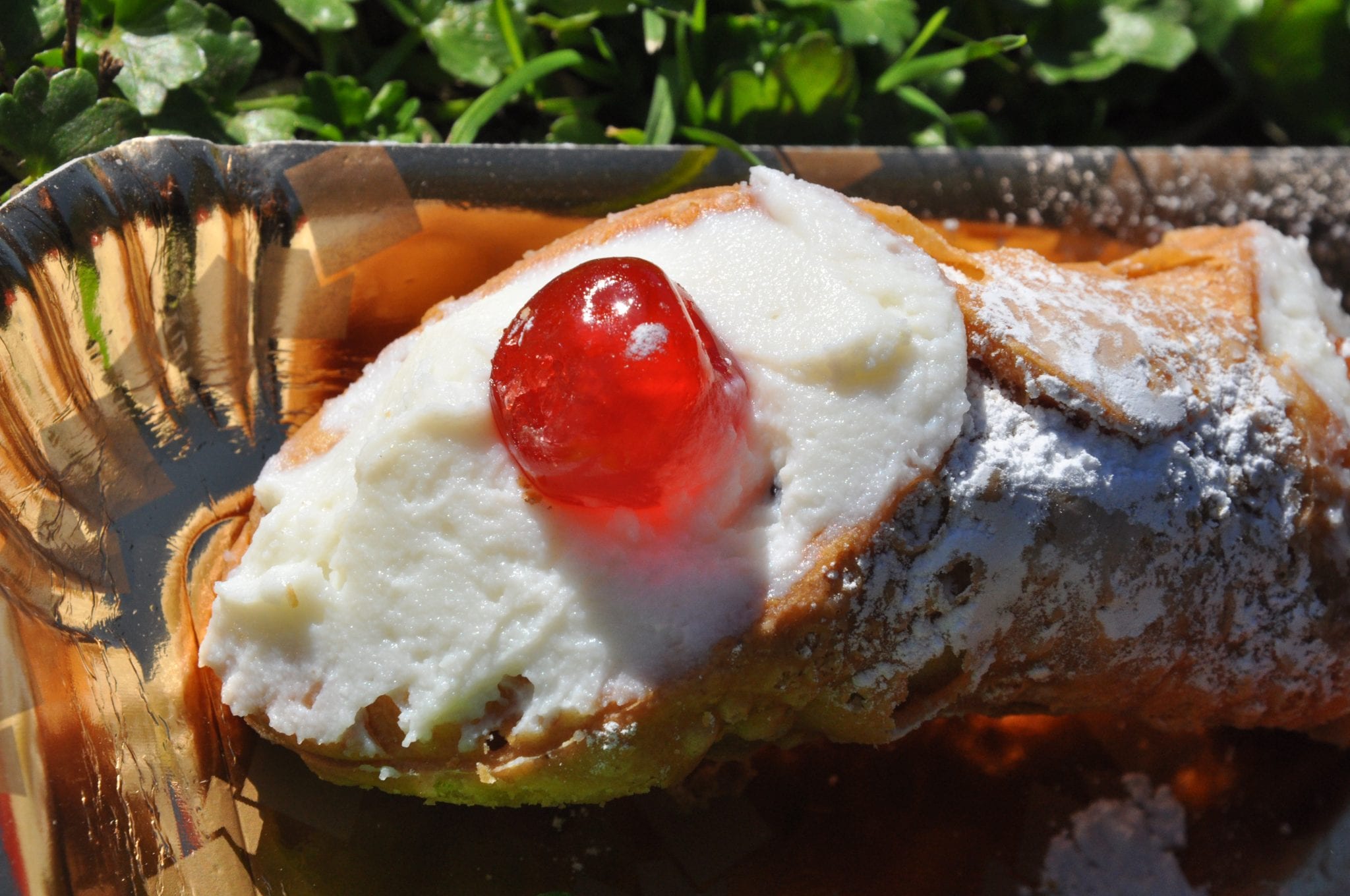 From cannoli to arancini, Sicilian food is world-famous—but if you’re headed to the island yourself, first check out our guide to the best towns in southern Italy and Sicily, and then prepare to be overwhelmed by just how varied and diverse Sicily’s cuisine really is!

Thanks to its hot-potato history (everyone from Arabs to Normans governed the island), Sicily’s cuisine represents a complex mish-mash of cultures. Plus, the island itself is incredibly fertile; produce grown on Sicily includes olives, oranges, lemons, eggplants, tomatoes, pistachios, almonds, grapes, and more—not to mention all of the seafood fished right off the coast. The result? A cuisine that’s fresh, varied, and absolutely delicious!

Here are just some of our favorite foods from Sicily! 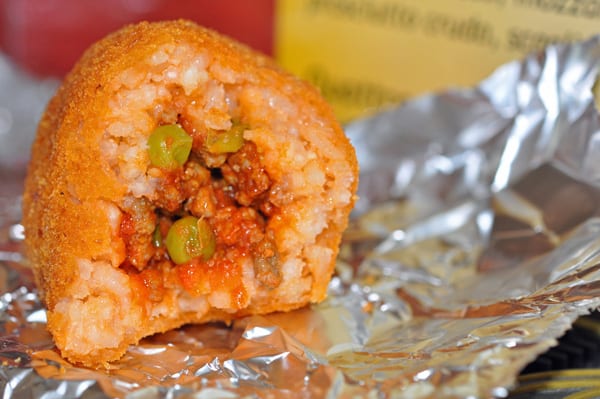 An arancina, one of Sicily’s most popular street foods

Arancini: Bite into one of these fried rice balls, and you might find anything from meat ragu to mozzarella to peas hidden within. A popular Sicilian street food, they’re the southern cousin of Rome’s cheese-filled suppli.

Pani ca meusa: The name of this street food means, literally, “bread with spleen”! But don’t let that scare you. Yes, it’s (sesame-flavored) bread, stuffed with chopped spleens and lungs of veal. But it’s also delicious… really! This is a particular specialty of Palermo. Nota Bene: DON’T miss this incredible city. Check out our Palermo city guide to learn what makes it so incredible.

Sfincione: Like a pizza… but even better. The dough is spongy and delicious, and the topping includes onions, caciocavallo cheese, bread crumbs, and (of course) olive oil!

Caponata: Like many Sicilian dishes, this one is based on eggplant. Eggplants are chopped and fried, and then seasoned with sweet balsamic vinegar, capers, and sometimes pine nuts and raisins. The result is a sweet-and-sour “salad” that’s a delicious accompaniment to the meal as a contorno—or even the main dish itself.

Parmigiana di melanzane: Yep, more eggplant! Known to English speakers as “eggplant parmesan” (although there’s no parmesan in the dish), eggplant is sliced, fried, and layered with cheese and tomato. And no, you don’t see chicken or veal parmesan in Sicily (or anywhere else in Italy); that’s the version that Italian immigrants made up when they moved abroad.

Spaghetti ai ricci: Seafood is a major specialty in Sicily—even sea urchins! This spaghetti is very simple, but takes a long time to make. The cook has to cut the sea urchins in half (avoiding the spines!) and scoop out just the “good” part of the meat, leaving behind the rest. The meat flavors the spaghetti with a delicate, slightly salty taste. If you’re wondering why this dish can be expensive, it’s because it takes about 15 sea urchins for one portion of pasta! Pasta alla Norma in Catania, where it was invented 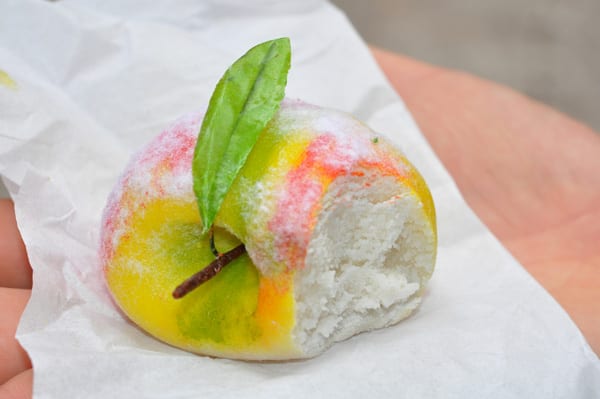 Pasta al pesto di pistacchi: Although most of us think of the basil variety from Liguria when we think “pesto,” it actually could apply to any similar sauce—including even ground-up pistachios.

Pasta con le sarde: Sardines are popular in Sicily, so it’s common to see them as a topping for pasta. One common variety is bucatini with sardines, fennel, saffron, pine nuts, and raisins.

Involtini siciliani: These “Sicilian rolls” are made up of veal, with onions, tomatoes, raisins and pine nuts.

Polpo bollito: Fish in Sicily is so fresh, it’s rarely served with sauces or even much seasoning. This is a classic example: It’s simply boiled octopus.

Frutta martorana: Other places call this “marzipan,” but here in Sicily, the almond paste is molded into little (incredibly realistic!) fruits—hence fruits of Martora, or frutta martorana. 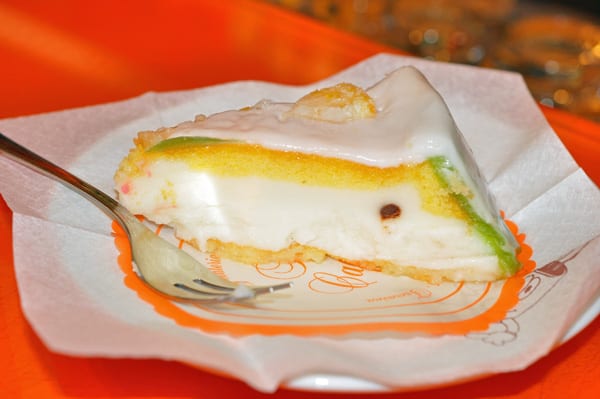 Cassata siciliana, one of the sweetest Sicilian desserts there is!

Cassata siciliana: A sponge cake is soaked in liqueur, its slices layered with sweetened ricotta, and the whole thing covered in almond paste, then icing. Oh, and studded with candied fruits and other goodies. This one’s for serious sweet tooths only!

Cannoli: What’s not to love about this Sicilian treat? A tube of fried dough gets filled with sweetened ricotta—and often topped off with candied fruit, pistachios, or chocolate chips.

Granita: The perfect summer refreshment, granita, originally from Sicily, can now be found all over Italy (including in Rome—check out the video below!). It’s just ground ice with sugar and fresh fruit… but it’s every bit as refreshing as it is simple.

9 responses to “The Best Food in Sicily: What to Eat While You’re There”