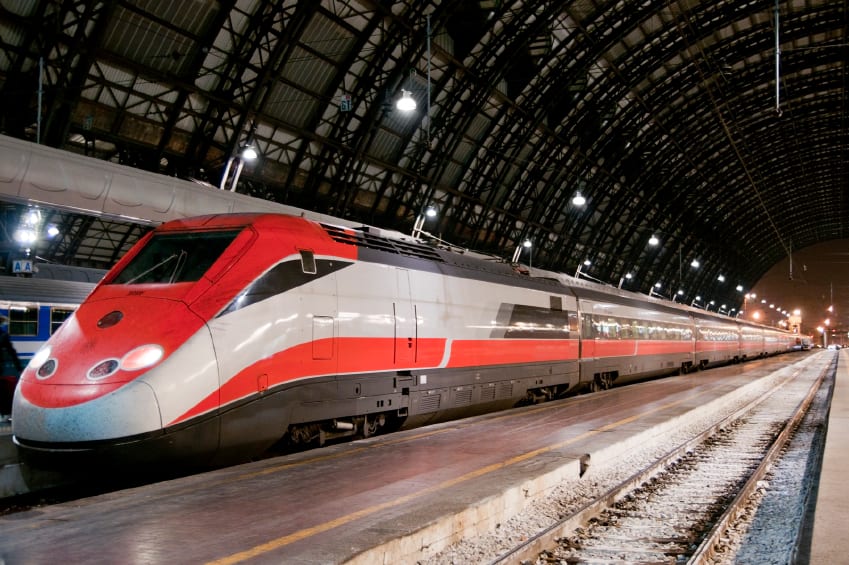 Pst! We’ve got a secret: The best way to get around Italy is by train. The Italian rail network connects just about every major city in Italy, runs like clockwork, and often includes spectacular views of the countryside. If you know a few simple tips about how to use it it’s an absolute breeze.

First, a quick look at the other options. Driving in Italy, particularly in Italian cities, can be confusing, chaotic, stressful and, for the uninitiated, even dangerous. (But if you do want to drive, you should definitely read our top 6 tips for driving in Italy.) Between the cost of car rental and gas it’s often cheaper to go by rail. Meanwhile, with all of the hassles of flying and the time required to get out to the airport, a flight often winds up taking as long, or longer, than the train — and, again, is often more expensive.

Of course, we know it’s easy for us to say that taking a train is easy. If you don’t speak Italian, even figuring out the train schedule can be tricky. That’s why we’ll walk you through how to book, and take, a train – right now.

How to find an Italian train schedule

If it’s your first time to Italy, you may find navigating the national ticket site a little tricky, so try easy-to-use ItaliaRail which provides 24/7 English-speaking customer service, facilitates multiple currency options and allows you to purchase tickets for up to 20 passengers in one booking. Oh, and it has a VIP Lounge in Rome Termini Station!

Seasoned travelers can choose between Trenitalia, or for high speed routes they can check out Italy’s new private high speed trains at Italo Treno. Take a look at both to compare dates, times and prices. Trenitalia is the national rail service, so it includes all of the national routes. (Small, local trains, like the Circumvesuviana that goes from Naples to Sorrento and Pompeii, aren’t included, but you don’t need them for most major destinations).

At the website, click the button that says “English” at the top. Then, on the left, you’ll see your options for searching routes. You can opt for one-way or for return, and you have to put in your starting point, destination, and date.

For example, let’s say you want to visit St. Peter’s Basilica in Rome then pop over to Naples for a jaunt through Pompeii. When you enter your options and click “Send,” the next page will show you a list of options around the time, and on the date, you selected. You might notice that under “Departure,” though, it doesn’t say Rome. It might say “Roma Te.” That’s because Italians call Rome “Roma,” and the “Te” is short for Rome’s main train station – Termini. Similarly, instead of “Naples,” it’ll often say “Na C.le,” short for “Napoli Centrale.” 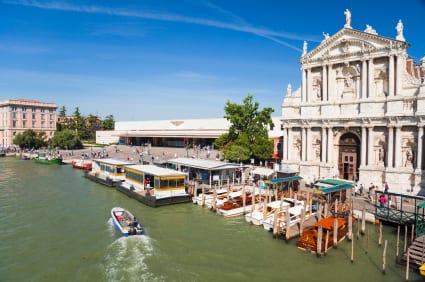 We know this can be confusing, so here’s a list of Italy’s major train stations and how they’re abbreviated on the Trenitalia site:

Sometimes, you might notice that one train station name at the top will be black, followed by a number of others in red. That means that there’s more than one station in the city you’ve picked, and the train stops at all of the stations on the list.

Figuring out the differences between Italian trains

Once you’ve got your destination and date down, you’ll often still have a number of options for exactly which train to take. You’ll notice clear differences under “length of journey,” with some (more expensive) trains being much faster than the other trains. You can also look at “train category.” The “Frecciarossa,” “Frecciargento” and “Frecciabianca” trains are the fastest, with speeds of up to 200-250km/hr. The “Eurostar” trains are also very fast. These are also the most expensive trains, and they connect only Italy’s most major cities. The most economical option tends to be the “Intercity” trains, which connect everywhere else, make more stops, and are slower, or the “Regional” (local) trains.

What train you pick, of course, is up to you. But because the Eurostar and Frecciabianca/argento/rossa trains tend to be not only faster, but more comfortable and cleaner, if we’ve got a little cash to spare, they’re our transport of choice. That’s especially true when there are discounts on those trains – as there often are.

When you’re looking at tickets online, don’t forget to check out Trenitalia’s deals (yes, that’s the link to their current promotional fares). You can see that right now, for example, children under 15 travel free with their Bimbi Gratis Offer. 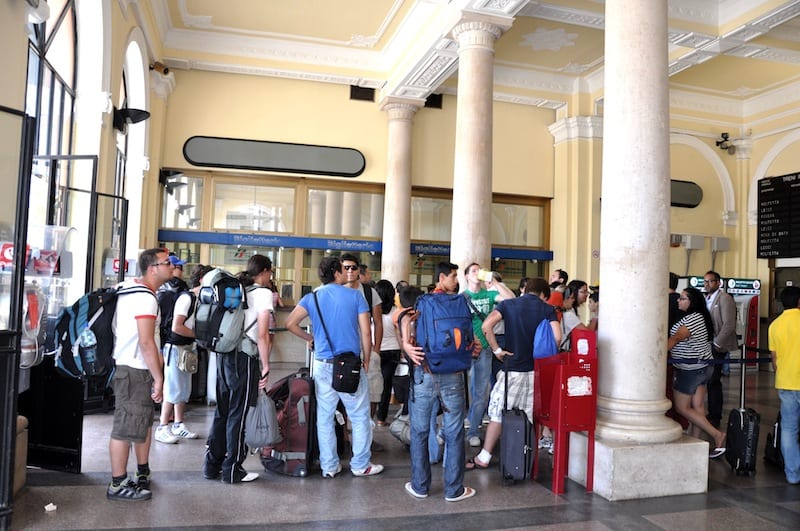 Another benefit to booking your ticket online: train stations can be crowded… and there can be lines, even for the automatic ticket machines!

How can you actually book one of these promotional fares? When you get to the page with all the train options and times, select the one you’d like to take, then click “Continue.” Your various options, like a “base” or “flexible” ticket, will show up – along with any promotional fares, like the Bimbi Gratis offer, if they’re available.

Booking your train ticket: online or at the station?

You can either book, and pay for, your ticket online, or, if you’re feeling a little more spontaneous, wait until you get to the train station.

Waiting has a major benefit: If you buy a ticket online, you then have to be on that exact same train – if you’re late or miss it, you have to change your reservation online. That can be a hassle, so if you can’t be quite sure when you’ll make the train, sometimes it’s best to wait. 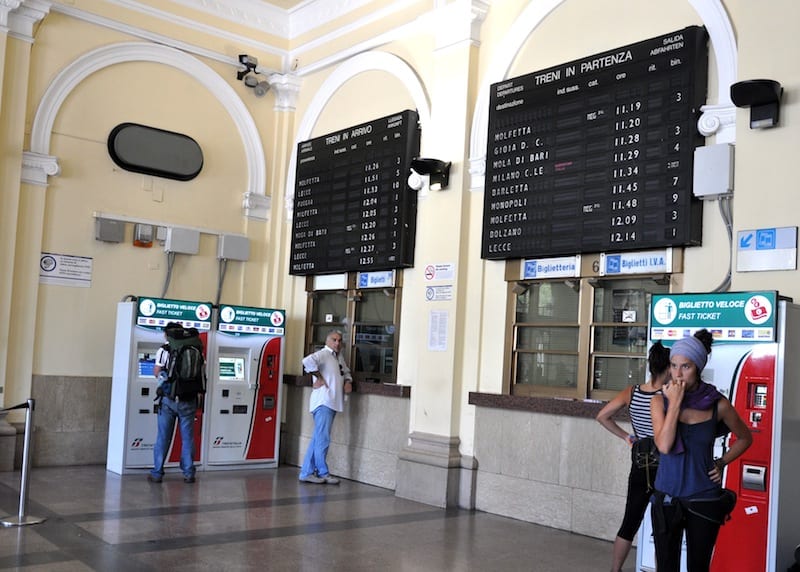 Look for your train on a board like this one!

That said, if you book in advance, you can change your ticket if you miss the train. For the “base” tickets, which are cheapest, you can change your reservation only one time, and it has to be done within the hour after the booked train has departed; you can do it either online, at an agency or at the station, and you have to pay the extra amount if the new train is pricier (you can also get money back if it’s cheaper, but, as to be expected, that procedure is a little trickier). The “flexible” tickets let you change your reservation an unlimited number of times, but that costs you 25% more.

Of course, the downside to buying your ticket at the station right before departure is that, often, it’s too late to take advantage of any promotional fares. And, very occasionally, particularly popular trains might even be sold out completely. So if you really want to take advantage of a discounted fare, or if you’re on a tight schedule, it might be worth booking online – or buying your ticket at the train station a couple of days in advance.

Finally, be aware that, if you book your ticket online, you don’t need a printer to print it out. Instead, Trenitalia has electronic tickets, either via email or sms text message on your phone. Once you board, simply show the email with the PNR number to the conductor or the sms from your phone and you’re good to go!

Now you’ve got your ticket… but how do you actually get the train?

Once you’ve gotten your ticket and you’re at the station, look for a big, hanging board with all of the newest trains listed. (One dead giveaway for where this is tends to be the crowd of people standing underneath it!). Don’t panic if, at first glance, your train isn’t there. You might be too early, since only the soonest departures will be listed. Or you might be looking at “Arrivi” (arrivals) rather than “Partenze” (departures). It’s also often easiest to go by the train’s number and departure time, rather than your particular destination. (You can find this either when you book it, or on your ticket itself; it’ll say “TRENO” followed by the number).

Remember: trains are listed by their final destination. Often your destination isn’t the last one so if you look up at the board and don’t see your destination, don’t panic, just look for your train’s number.

Once you’ve found your train, look where it says “BIN,” for “binario” (platform). That’s your platform number. Don’t worry if this takes a while to come up – you won’t be the only one hurrying to the train, and it’s rare for a conductor to leave a crowd behind on the platform!

Don’t forget to validate your ticket. You often don’t have to do this for fast trains that required a reservation – but if you’re uncertain, it’s always best to be on the safe side. The validation machines tend to be all over the station, as well as on the platform; they’re usually yellow. To stamp, put your ticket in the slot, arrows facing in, and push until you hear the stamp. If you don’t do this and you were supposed to, you can get a heavy fine when (or if) your ticket is checked. 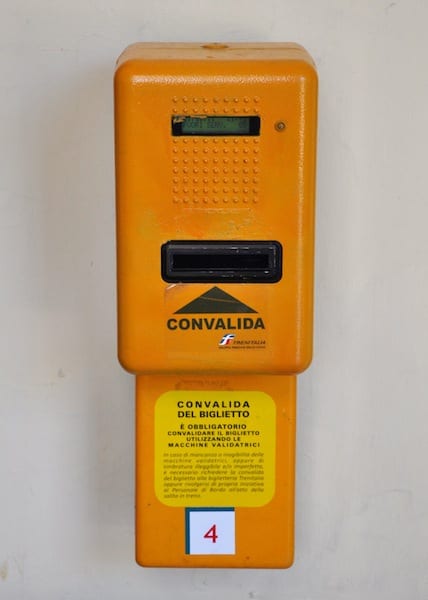 To validate your train ticket, use this guy

Depending on what kind of train you booked, also check your ticket. After the train number, it might say “Carrozza” followed by a number. That’s your carriage number. Then it’ll say “posti,” which is your seat number. Many Italian trains have reserved seats, so make sure you sit in the right one. Even if there are a ton of empty seats elsewhere, you never know how many people might be getting on, and trying to sit in their reserved seats, at a later stop. (If someone’s in your seat, showing them your ticket will usually suffice for them to move).

Typical train ticket – this one’s for an Intercity train, base fare, from Salerno to Rome’s Tiburtina station

So you made your train. Now what?
Relax! Just don’t forget where you put your ticket, as it may be checked by the conductor (you can get a stiff fine if you’re found riding without a ticket!). Also be aware of those around you: Both train stations and trains themselves are a favorite haunt for pickpockets, particularly on the major lines, like from Rome to Naples. Know where your things are at all times, be careful of putting your bag or purse on the ground where you can’t see it, and never fall asleep with your purse next to you if you’re traveling alone.

487 responses to “How to Travel Italy by Train: It’s Easy, We Promise”