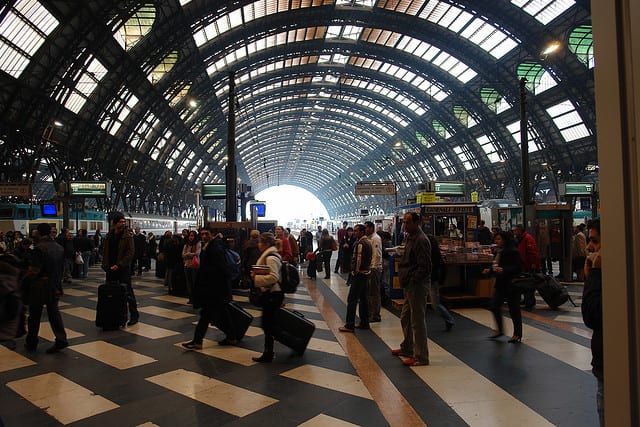 Between the Milan subway, bus, and tram, public transport in Milan can seem daunting! But it is possible to get around the city with ease… even when you don’t want to shell out for a cab, and when you can’t possibly take one more step.Milan’s public transportation system connects across the city center, making it easy to get around the city’s most popular attractions. Opting for public transportation is a great “green” way to travel. It’ll also save you lots of time and money (if you don’t take cabs, you can avoid traffic and dropping lots of cash)… which means more to spend on shopping! (Don’t miss our post on where to shop in Milan!).

Here’s how to get around Milan, how to get to Milan from the airport, and how to take day trips… all using public transport! Getting to Milan from the airport

Many tourists wind up taking a taxi from the airport to Milan’s city center – at a cost of about €100!

Instead, take advantage of the much cheaper, and faster, public transport options.

One great option is the Malpensa Express train, which runs from Milan’s main airport to the Cadorna FN, Stazione Centrale and Porta Garibaldi subway stops (€11 for a one-way ticket; takes about 40 minutes). There also are shuttle buses, like the Malpensa Shuttle to the Malpensa and Linate airports (€16 round trip), Air Bus Linate from the Linate airport to the Stazione Centrale (€9 round trip) and the Orio Shuttle (€5 one way) from the Orio al Serio airport.

Milan’s public transport options include the subway, bus and tram. Prices for tickets and passes valid for the subway, bus and tram include €1.50 one way, €4.50 for an unlimited day pass, €11.30 for a weekly pass and €35 for a monthly pass, with further discounts for children, students and senior citizens. Each ticket is valid for 90 minutes (and remember to always validate your ticket in the machine as soon as you step onto the bus or tram!).

Tickets can be purchased at the self-service machines, at newsstands, and at the ATM Point service centers, located in the Duomo, Centrale, Cadorna, Loreto, Romolo and Garibaldi stations.

Ticket collectors are usually dressed in civilian clothing and are constantly checking – be sure to always keep your ticket after validating it on the subway, bus or tram!

Want to get exact directions for how to get from point A to point B? Check out the GiroMilano feature on the ATM website.

When you want to jump on the subway, just look for the illuminated red and white “M” lampposts, which signify where there’s a metro stop.

Milan has four subway lines. Each has a different color and number; transfers between lines can be made at the Cadorna, Centrale, Duomo, Loreto, Porta Garibaldi and Zara stops.

The M5 is Milan’s ultra-modern new line – it’s up and running, but parts are still under construction for expansion. When traveling past the dotted red line into the suburban areas, be sure to purchase a ticket with an extension.

Subway trains usually run from 6am to 1am, but times may vary depending on the line. Milan’s public transit system offers more than 80 eco-friendly bus routes. And, believe it or not, most of the buses do run on time!

We recommend traveling with the 94, which circles the city center and popular tourist highlights. Also useful: A night route has recently been implemented that follows the stops along the metro when it is closed.

When you want to get off the bus, be sure to press the button to alert the conductor… before you arrive at the stop!

The tram, meanwhile, is a fun (and classic) way to travel. These orange-and-yellow or green trams offer service at night, as well, but be prepared to wait for a long time.

With either the bus or tram, don’t forget to validate your ticket as soon as you step on. Milan is a great base for discovering northern Italian gems by train! The Lago Maggiore and Lago di Como lake regions are easily reachable by the Trenord commuter rail from Cadorna FN and Stazione Centrale stations. You can also reach the nearby mountains, smaller towns like Pavia, Bergamo and Cremona, and larger cities like Bologna, Genova, Turin and Venice. One more alternative to taking a cab (or walking): BikeMi! Milan’s popular bike-sharing initiative is a great way to get around and see the city.

You’ll find many bike stations to pick up and drop off bikes in the city center, making it easy to stop and enjoy the sights. Register on the BikeMi website or at the nearest ATM point for a daily (€2.50), weekly (€6) or annual (€36) subscription.

Bikers are provided a username and password upon registration and enjoy the first 30 minutes of biking free, with an additional €.50 charged per half hour. Be sure to check in every two hours to avoid penalty fees! More information available on the ATM website. 46 responses to “How to Take Public Transport in Milan”

Where to Shop in Milan

Where to find the best shops in Milan, including designer stores at the Quadrilatero...

More than a city park, Parco Sempione in Milan has lots of attractions to...

Milan Fashion Week: What You Have to Know

Learn about Italian Fashion Week in Milan, including how to attend fashion shows and...

Six tips to know about Milan's Last Supper, including how to get Last Supper...

The 5 Best Things to do in Milan in the Fall

There are so many things to do in Milan during the fall it boggles the mind....

Where to Stay in Milan: How to Choose the Right Neighborhood For Your Visit

So, you want to visit Milan? Impeccable choice. Though it has traditionally been considered...