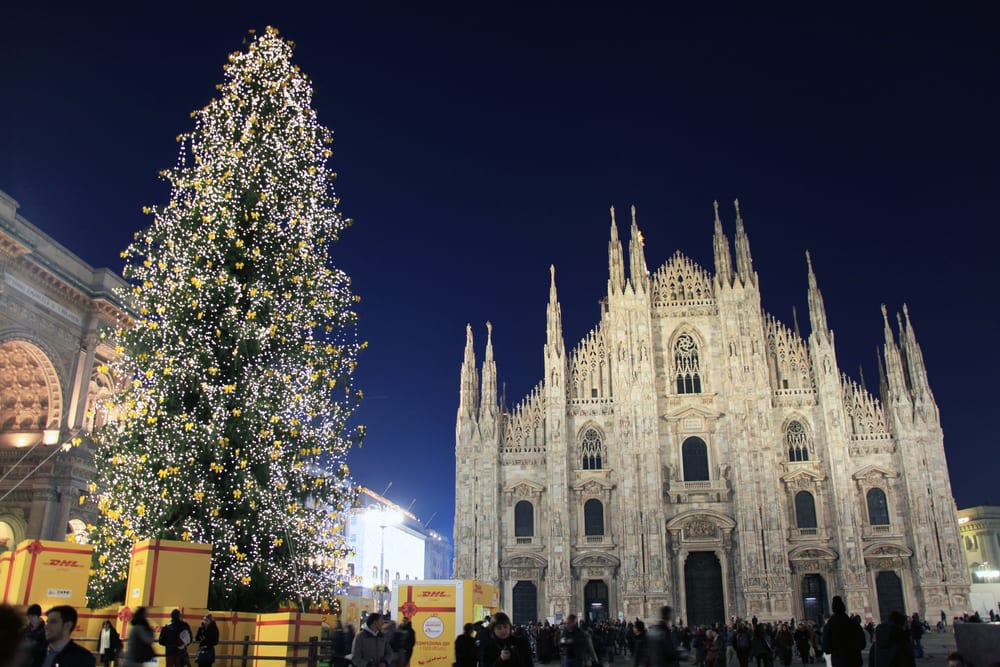 Christmas in Milan isn’t just beautiful—it’s the perfect place and season to get some shopping done! One of the world’s most renowned shopping destinations, Milan lights up during the holidays with miles of designer stores, unique boutiques and outdoor markets, making it the perfect destination for getting through your Christmas list.

But even if you’re not the biggest shopping fan, there’s plenty to do and see, from midnight Mass at the Duomo to ringing in the New Year like a true Milanese.

Coming to Milan for Christmas or New Year’s? From Christmas markets to holiday museum hours, here’s our guide to enjoying Christmas in Milan!

Christmas officially kicks off on December 7, better known as the local holiday that celebrates St. Ambrogio, Milan’s patron saint. The season always opens with the “O Bej, O Bej” Christmas market (which means “oh how nice!” in Milanese dialect). As they have for centuries, every year, hundreds of stands set up in front of Castello Sforzesco, selling everything from local delicacies like panettone (a sweet Christmas bread) to handmade goods.

Not enough holiday shopping for you? Get lost in the thousands of stands at the Artigiano in Fiera, which takes place at the Rho Fiera Exhibition Center during the first 10 days of December.

(For more, check out our post on 10 of the best Christmas markets in Italy!). At Christmas, Milan’s window displays are even more stunning! Photo by Paolo Bona

If you’ve missed the markets, no worries: Milan has plenty of other shopping opportunities. Take a stroll down one of Milan’s most stylish streets, like Via Monte Napoleone or Corso Buenos Aires, to admire the decked-out windows and browse the latest fashions. (For more, check out our guide on where to shop in Milan!). But don’t expect to find many deals: While some chains offer holiday sales, most major discounts start the second week of January. 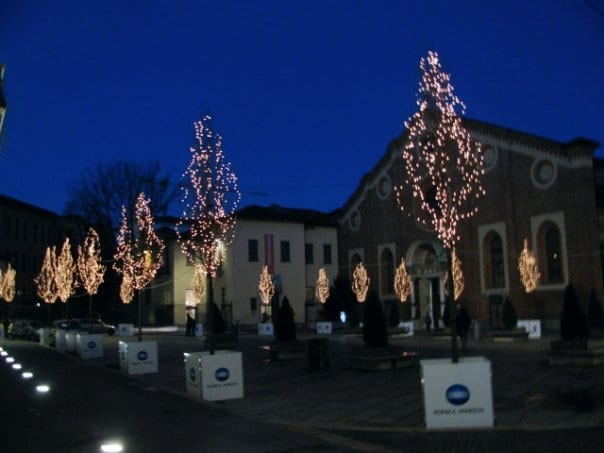 The prettiest Christmas decorations in Milan

As the sun goes down, the lights go up. Come Christmas, colorful lights dazzle the city’s architecture and piazzas—even the trams!

Our favorite spots to experience the festive decorations include the Christmas tree in Piazza Duomo, the dazzling dome in the Galleria Vittorio Emanuele II and the majestic Castello Sforzesco. Or head up the Torre Branca in Parco Sempione for a panoramic view of all of Milan’s Christmas lights at once. (More on the Torre Branca in our post on Milan’s Parco Sempione!).

Milan is home to some of the most acclaimed art in the world, from its Gothic Duomo to elegant opera house, Renaissance masterpieces to avant-garde design. If you’re coming over Christmas, be aware that some of these sites close over the holidays, particularly on December 25 and January 1.

Here’s a cheat sheet to what’s open, when:

Most stores and restaurants close down on Christmas, even the huge Rinascente department store. A handful are open, but when it comes to dining on Christmas Eve and Day, make your reservations in advance; some of our favorite spots open for holiday meals are Il Luogo di Aimo e Nadia, Al Garghet and Antica Hostaria della Lanterna.

Want to get out of the city for the holidays? Milan’s central location makes it easy to reach both the lakes (Lago Maggiore and Lake Como) and the Alps (like Valtellina and Courmayeur) in less than two hours! Trains and public transportation do run on Christmas Day, but service may be limited. Check out our guide to public transport in Milan before planning your trip.

Celebrating Christmas like the Milanese do (including midnight Mass)

The vigil Mass at the Duomo with the Archbishop begins at 11:30pm, but arrive at least two hours earlier to snag a spot in the church. Other popular midnight Mass and Christmas Day services are celebrated at the churches of Sant’Ambrogio and Santa Maria delle Grazie.

Christmas Mass in English is sometimes available at Chiesa Santa Maria del Carmine, but is not scheduled every year. 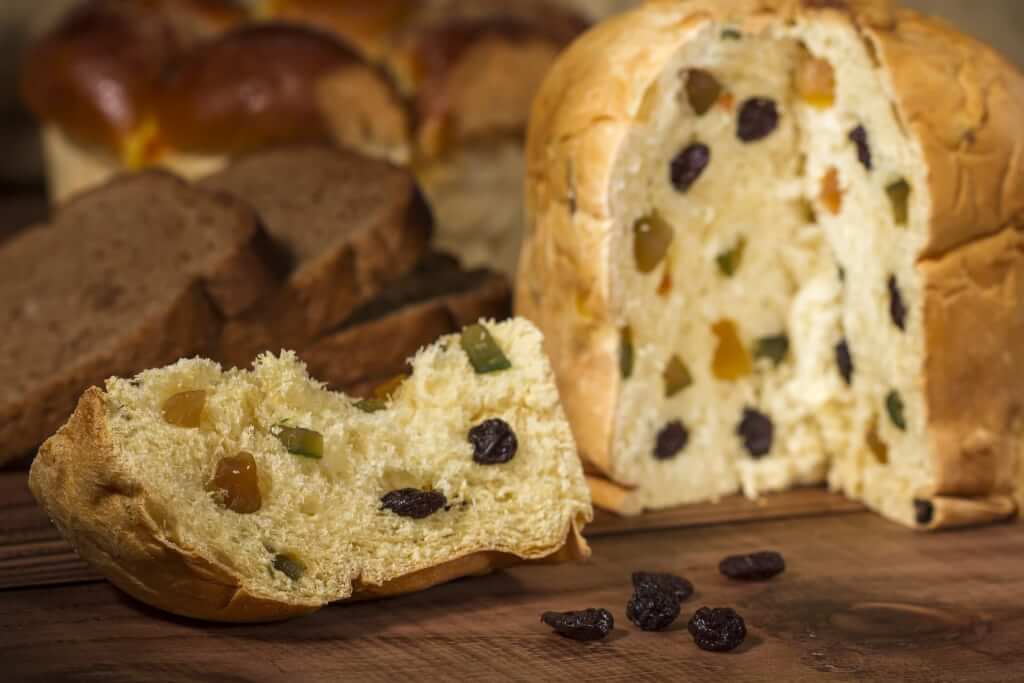 Panettone—a sweet Christmas bread with candied fruit—originated in Milan and is a staple across Italy at Christmas. It’s often given as a gift and served at dessert. We love the panettone from Marchesi and Peck, but be prepared to wait in line! (Don’t miss our post on panettone and Italy’s other Christmas cakes!).

How to celebrate the New Year in Milan

New Year’s Eve is a fabulous celebration in Milan, with many of the city’s uber-trendy clubs offering packages that include aperitivo, dinner and dancing. Some of the most popular locales are Byblos, Gattopardo, and Milan’s designer-owned clubs, like Armani Privé and Just Cavalli.

The city also offers more budget-friendly celebrations like fireworks at Castello Sforzesco, parties outside at Piazza Duomo, and bars on the Navigli canals and around the nearby Colonne di San Lorenzo piazza.

As on Christmas Day, most restaurants and shops close on New Year’s Day, letting workers celebrate the new year and spend time with family.

Although the Epiphany on Jan. 6 isn’t as commonly celebrated as in other central and southern Italian cities, Milan celebrates the holy day with a procession from Piazza Duomo to the church of Sant’Eustorgio (near the Navigli area), with a reenactment of the march of the Three Kings.

If you’re coming to Italy over Christmas, don’t miss our post on celebrating Christmas and New Year’s in Florence, too!

17 responses to “Christmas in Milan (And New Year’s, Too): What You Have to Know”