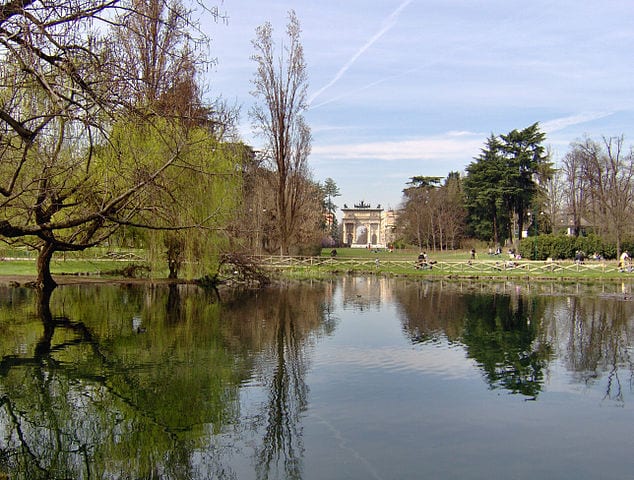 If you’re looking for some green space—and off-the-beaten-path sightseeing in Milan—head to Parco Sempione. Located in northwest Milan, this large park (116 acres) is the perfect place to enjoy a walk or run among flowers and greenery, far from the hustle and bustle of the urban jungle. But the park, constructed back in 1888, is also full of attractions—including an aquarium, sports stadium, Napoleonic arch, and even a medieval castle.

Here are 6 of our must-see sights in Milan’s Parco Sempione! 1. Castello Sforzesco: This castle was first built in the 1300s, but devastated after multiple attacks on the city. The current (and final… at least for now!) version was commissioned by Francesco Sforza, Duke of Milan, in the 15th century.

The enormous landmark no longer has any residents, but is open for tours. Masterpieces within the castle include Michelangelo’s unfinished last work and frescoes by Da Vinci and Bramante, as well as international art exhibits and events, like Milan Fashion Week fashion shows, in the courtyard. (Here’s everything you have to know about Milan Fashion Week!). 2. Arco della Pace: The recently renovated “Arch of Peace” is one of Milan’s most beautiful, yet off-the-beaten-path, pieces of history. Made of marble and topped with horse-drawn chariots, the arch was built as a tribute to Napolean’s victories and was to be included in the city’s “Foro Bonaparte”—a modern version of the Roman Forum, designed by architect Luigi Canonica.

3. Arena Civica: One of Milan’s most famous sporting arenas, also designed by Canonica, dates back to 1807! The neoclassical stadium holds 10,000 people and hosts major soccer and rugby games and international concerts. Head inside the huge doors for a visit or even a run around its historic track, which opens daily to the public.

4. Acquario Civico: This stunning building, with its large statue of Neptune, god of the sea, is home to more than 100 varieties of fish. The aquarium is open to the public every day except Monday, and entrance is free of charge. Don’t miss the large tanks of rare and Mediterranean fish, complete with video presentations! 5. Torre Branca: The Torre Branca may just look like an ordinary  steel tower from the ground… but don’t let that fool you! One of the city’s highest buildings, the tower boasts fantastic views of Milan.

Take the elevator all the way up for incredible views of Parco Sempione, the Duomo (Milan’s cathedral) and the city’s modern skyscrapers—on a clear day, you can even see the mountains beyond Milan. The entrance fee is €4, and the tower is open until midnight, if you want those perfect nighttime cityscapes. (Check out the opening hours before you go!).