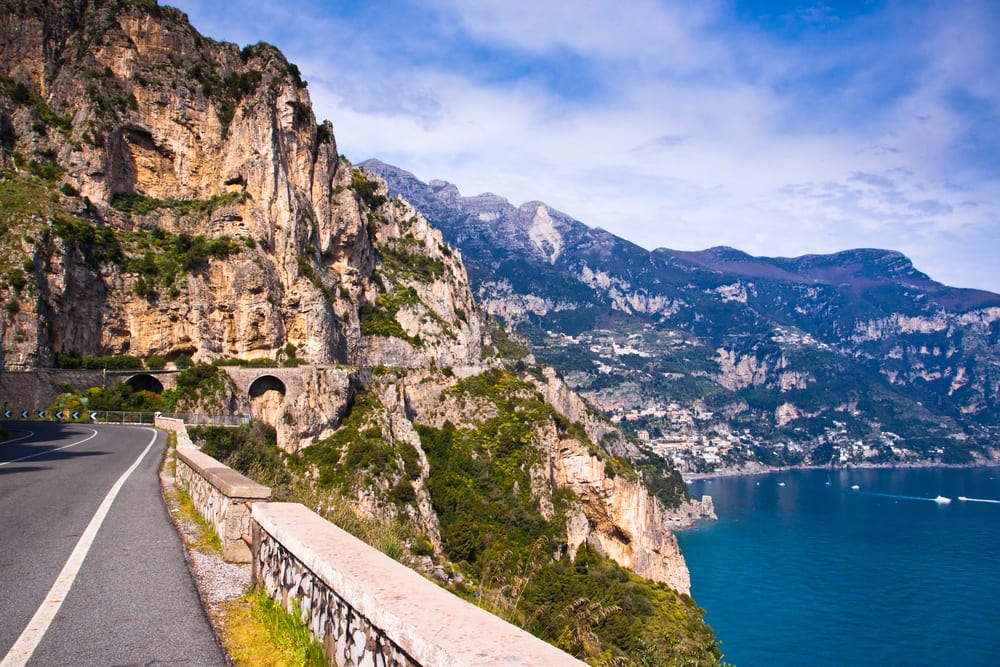 How To Get to the Amalfi Coast

The more knowledge you have about Italy the better your travels will be. If you want to learn everything you need to know about the country, check out the rest of our blog on how to travel in Italy.

Trying to figure out how to get to Amalfi coast? Getting to this stunning stretch of coast in Italy can seem daunting without a car – but there are plenty of public transport options for getting to Sorrento, Amalfi, Positano, and the other gorgeous towns on the Amalfi coast, whether from Rome or Naples!

Read on for our easy guide for getting to the Amalfi coast. We’re giving you a few options. The first two are how to get to the Amalfi from Naples or Rome. The closest international airport to the Amalfi coast is in Naples (the Capodichino airport), but many people prefer to fly into Rome, as it’s cheaper. And, of course, even if you’re coming to the Amalfi from another city in Italy, like Florence or Venice, you’ll want to get to Rome or Naples (usually by train or plane) first. Which transport you take all depends on your time, comfort level and, of course, your ultimate destination.

Getting to the Amalfi coast from Rome

Rome to Positano and Praiano by bus

In summer (the beginning of June to the end of September), a bus runs to both Positano and Praiano from the bus depot at Rome’s Tiburtina train station. The bus leaves at 7am from the depot, located a short walk from the Rome Tiburtina station. Just don’t get it confused with the local ATAC bus stops just right outside the Tiburtina train station. It gets into Positano at 11.30am and Praiano at 11.45am. (Don’t miss our insider’s guide to Positano!). Now it seems that with Marozzi Bus Journeys you can take the bus to Positano, but it also has other stops such as Pompeii and Sorrento.

Rome to Naples by train

Another option is to take a train from Rome to Naples. Trains run frequently, operated by both Trenitalia and Italotreno, and the journey for the fastest train takes a bit over an hour. (For comprehensive train info, read our guide to how to take the train in Italy for step-by-step instructions for using the website, booking, and more!).

From Naples, you’ll want to take a mode of transport on to the Amalfi, so check out the section below for exactly how to do that!

Rome to Salerno by train

Alternatively, you can get directly to the Amalfi coast from Rome by train if you head to Salerno. If you’re unsure about where to stay, read our post on Salerno, the perfect off-the-beaten-path city on the Amalfi coast.

Salerno is also a good destination if you are traveling to towns further south on the Amalfi coast, like Vietri sul Mare, Maiori, Minori or Amalfi.

Both Trenitalia and Italotreno run numerous trains directly to Salerno.

Read on to see how to get from Naples and Salerno to the Amalfi coast!

Getting to the Amalfi coast from Naples

Once you’re in Naples, there are several means of transportation to get to the Amalfi coast.

Naples to Salerno by train

If your final destination are towns south of Amalfi or Salerno itself, you might consider taking a direct train from Naples to Salerno. The train ride takes less than 40 minutes. From Salerno, you have the option of taking the SITA bus to other towns on the Amalfi coast, including Vietri sul Mare, Maiori, Minori and Amalfi.

Naples to Sorrento by train

Alternatively, if your final destination is Sorrento or towns north of Amalfi, you’ll want to take the Circumvesuviana from the main Naples station (Napoli Centrale). When you’re there, look for the signs for the “Circumvesuviana” trains and buy the tickets from the desk—the main ticket machines you see are not for the Circumvesuviana trains.

The Circumvesuviana train ticket from Naples to Sorrento costs €4.10, and takes slightly more than an hour. There will be stops along the way. This website provides the details and schedule.

As with Salerno, once in Sorrento, you can take the SITA bus to towns along the coast (read on to our section on “Getting from Sorrento to the Amalfi coast by bus”). This route is the cheapest option for getting to the Amalfi coast.

Note: From the Capodichino airport, you can take the Alibus to the main train station. It leaves every 20 minutes from the airport, and takes about 20 to 30 minutes. The cost of the ticket is €3. If you decide to take a taxi instead, the fixed rate is €16 (read the official list of tariffs here).

The Naples airport to Sorrento by bus

From the Capodichino airport in Naples, a bus runs directly to the Circumvesuviana train station in Sorrento. The journey takes about 1 hour and 15 minutes (depending on traffic conditions). Buses leave almost hourly, starting at 9am and with the last one at 7:30pm. The ticket costs €10 and can be purchased on board.

The Naples airport to Vietri sul Mare and Salerno by bus

You also can take the bus from the Capodichino airport to Salerno. Note that though the cost of the one-way ticket is affordable (€7), it only has four departure times. This bus also stops at Vietri sul Mare.

Naples to Sorrento, Positano or Amalfi, by ferry

From the port in Naples (Moro Beverello), you can catch a ferry with Alilauro to Positano or Amalfi by first stopping in Sorrento

Note: From Capodichino airport, you can take the Alibus to Piazza Municipio. 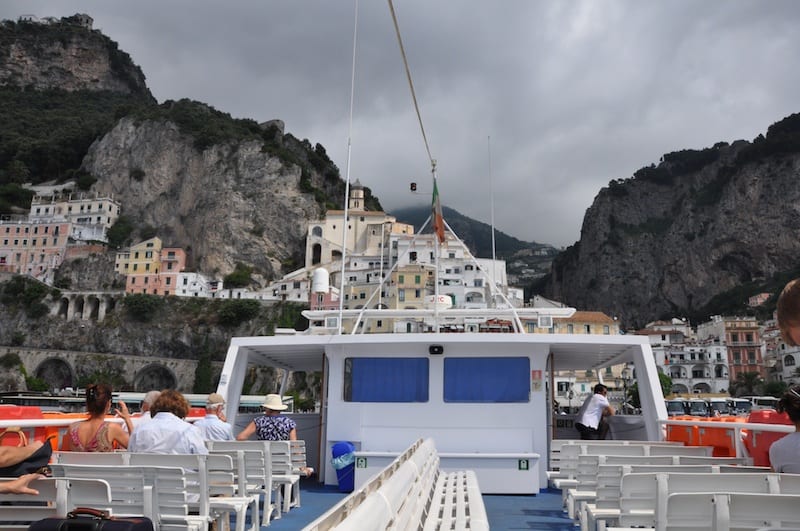 The ferry from Amalfi | Photo by Amanda Ruggeri

Naples to the Amalfi coast, by taxi or private transfer

The most expensive, but fastest, option is a taxi or private transfer to Amalfi or Positano from Naples. This will set you back about €120 to €150, one-way. From Naples, taxis are meant charge a fixed rate, as per the tariff set by the City of Naples.

Getting to the Amalfi coast from Sorrento

While many people consider Sorrento to be on the Amalfi coast, technically it’s not! And whether you’re using Sorrento as your base or just passing through on your way to other Amalfi coast towns, you’ll find these transport options helpful.

SITA buses operate daily and almost hourly from Sorrento to the Amalfi coast, with stops in Positano, Praiano and Amalfi, among other destinations. This would be the best way of getting to Amalfi coast as it operates year-round.

The final stop for the bus from Sorrento is in Amalfi; if you are going to Ravello or towns south of Amalfi, you will need to switch to another SITA bus there.

Alilauro has ferries operating from Sorrento to Amalfi. To find the timetables and book, click on the site’s “booking online” option.

Getting to other spots on the Amalfi coast from Salerno

Atrani, a serene and charming town on the Amalfi Coast | Photo by Donar Reiskoffer

Salerno to other Amalfi coast towns, by bus

SITA buses run frequently from Salerno to Amalfi, with stops in Vietri sul Mare, Maiori, Minori, and Atrani. If you plan on visiting the other towns on the Amalfi coast, you may want to look into the UNICOCostiera integrated ticket.

Salerno to other Amalfi coast towns, by ferry

NLG operates a daily ferry from Salerno to Amalfi, which departs only in the morning at 8.20am. The trip takes 20 minutes and costs €8. Please check the website for any changes in the schedule.

If you don’t have time to explore the Amalfi coast on your own, check out our day-long excursion to Pompeii and the Amalfi Coast, including a private transfer from Rome! 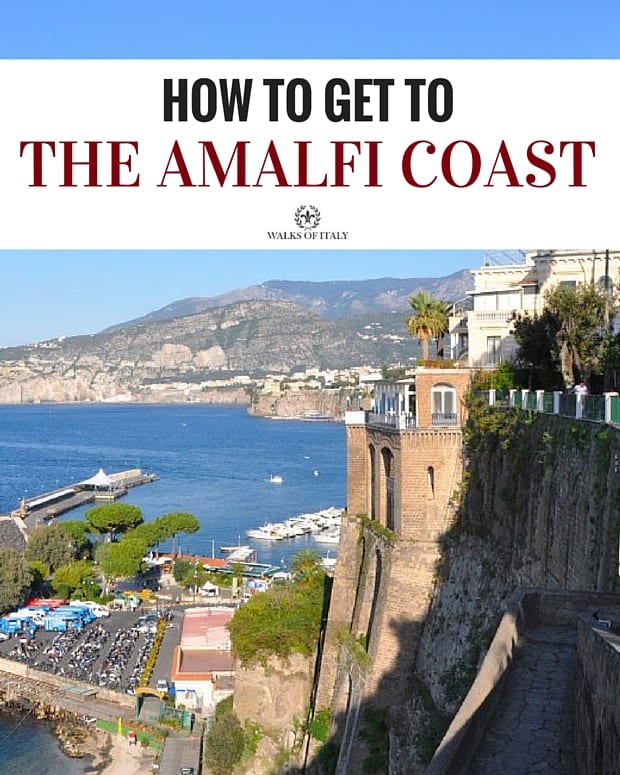 87 responses to “How To Get to the Amalfi Coast”

When it comes to spectacular views and cute seaside towns, both the Amalfi coast and the...