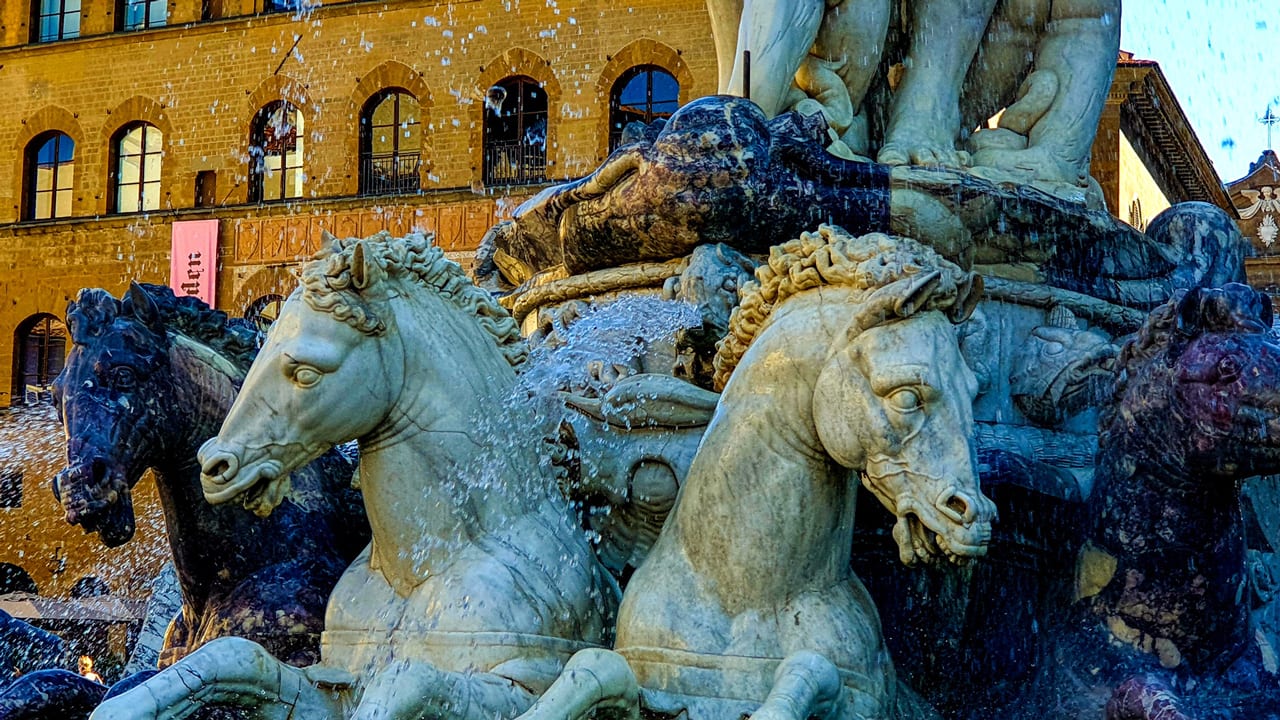 Home to the Palazzo Vecchio (Florence’s town hall) and gateway to the Uffizi Gallery, ushered by tall arches of the Loggia dei Lanzi, Piazza della Signoria has been the center of political life since the 14th Century. The most famous square in Florence has borne witness to hundreds of notorious events throughout history such as the return of the Medici in 1530, as well as executions such as that of Dominican brother Girolamo Savonarola, hanged in 1498. Piazza della Signoria has been the symbol of Florentine civic life throughout history – as the bell rang in the tower of the Pallazo Vecchio during the 14th and 15th Centuries, the Florentine citizens gathered to listen to announcements, approve new laws, or prepare to defend against opposing institutions. What we are left with today is a fascinating open-air museum, depicting Florence’s turbulent political past. 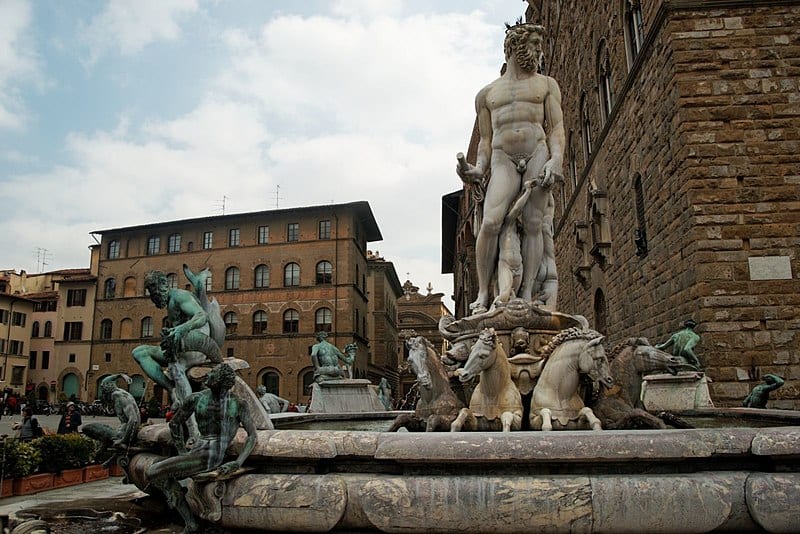 As the hub of democratic endevours, the piazza has been embellished over the years with many statues, alive with political connotations including; the replica of Michelangelo’s Statue of David, erected as a symbol of the Republic’s resistance to the Medici and Benvenuto Cellini’s Perseus with the Head of Medusa, believed to represent Cosimo I de’Medici (Grand Duke of Tuscany), who “cut the heads off” the republic.

Standing triumphantly in front of the Palazzo Vecchio is the iconic marble Fountain of Neptune by Bartolomeo Ammannati, which was designed in celebration of the opening of the first aqueduct in Florence to bring running water to the city. The face of Neptune was carved to look like Cosimo I de’ Medici, symbolising his position as absolute ruler and Florence as leader of the Mediterranean. Due to its political connection, the fountain was subject to many political vandalism attacks throughout the years, which led to the creation of a replica in the 1800’s so that the original statue could be given a safe haven in the National Museum. The statue in the square, albeit a copy of the original continued to fall victim of attacks right up until 2005, after which it was restored in 2007. A larger restoration project then began ten years later in 2017, which amounted to a significant 1.5 million euros.

On this short virtual tour, picture yourself standing in this beautiful piazza, and feel the history emanating from its very core.

To get a full 360 immersive experience, click the video and drag the mouse around the screen for a full view of Florence’s most iconic square.

“And here we are in the Piazza della Signoria, this is now the political heart of Florence.

Take a glance at this imposing palace which has been the city hall since the olden times and is still today. It was built out of these rustic, rough stones in 1299, at a time when the Florentine’s didn’t really fear enemies coming from outside, but the enemies within the city. At that time there were a lot of different wealthy families fighting against each other for control over the city of Florence—one of which was the Medicci family, who came to control the city for over 300 years.

Here we are now in front of the Loggia dei Lanzi, originally speaking, built as a meeting place where the Florentine people would meet, and the government would debate and make speeches in front of the common people.

Over hundreds of years, this hall was eventually transformed into an open air museum, which today houses many masterpieces. I’d like to point out one of these, which is right here in front of us and it’s Benvenuto Cellini’s masterpiece, Perseus, who is standing proudly on the dead body of Medusa, holding up her face—this piece of art was made in competition to Michelangelo’s David.”