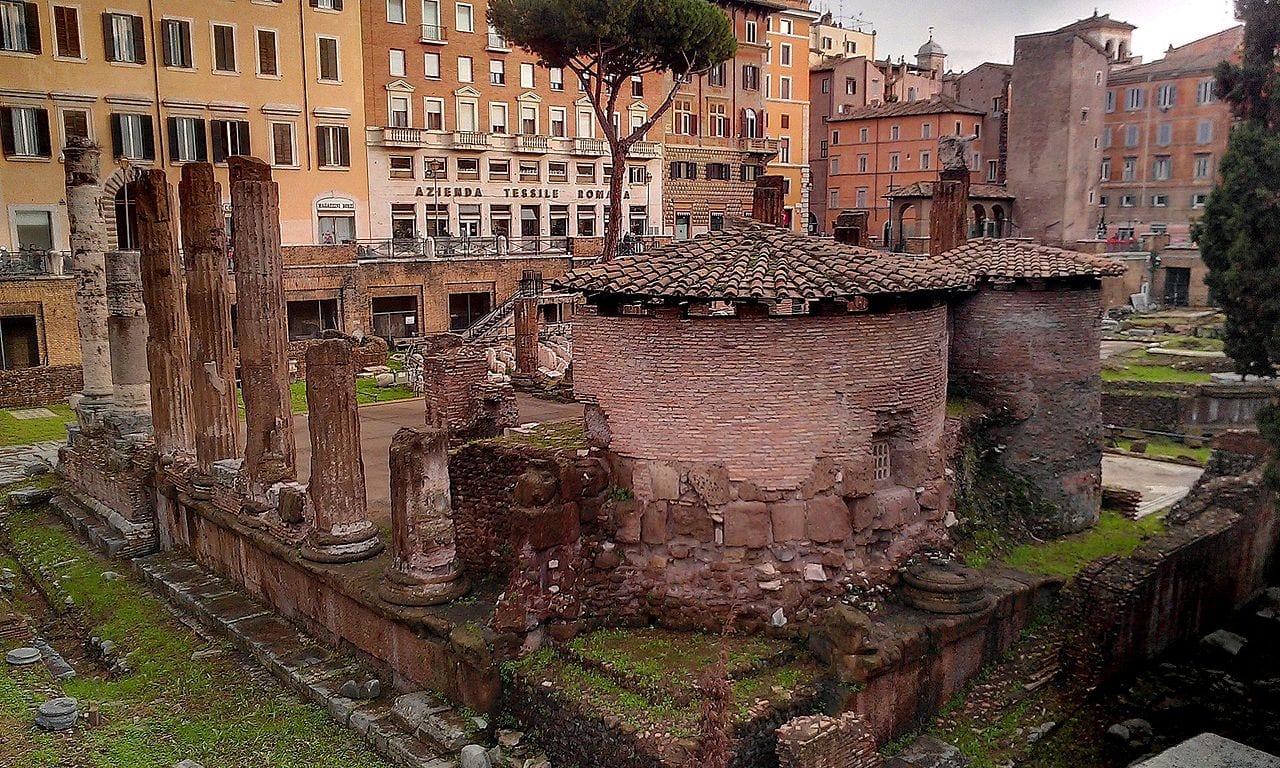 The name of this ancient square may lead you to think it is linked to the South American country – however it was in fact named after the Argentina Tower, built by Johannes Burkhart, a Papal Master of Ceremonies during the Italian Renaissance. The tower was built alongside Burkhart’s palace, before the tower and palace were destroyed during restoration work in the 19th Century. The name of the late tower (not to be confused with the current tower near the square) was chosen according to Burkhart’s birth city of Starsbourg – the ancient name of which was Argentorum.

The square of Largo di Torre Argentina went unnoticed as an archaeological site until the start of the 19th Century, when upon demolishing the site in preparation for reconstruction, they discovered a large marble statue. From deep in the ruins, eventually emerged the remnants of four ancient temples, and the remainder of the Theatre of Pomey, where several monumental historical events took place.

The ancient ruins found in this square date back to the Republic era, the era of classic Roman Civilization – meaning they are some of the oldest ruins in all of Rome. This era precedes the Imperial era, the period of the Roman Empire ruled by Augustus Cesar – and to which we owe famous ancient architecture such as the Colosseum and most Roman triumphal arches.

In this virtual 360 tour, we’ll give you an idea of what took place here, and why this exquisite piece of ancient history shouldn’t be missed on your next trip to Rome!

Don’t forget to drag your mouse around the video screen for a full 360 view.

“We’re standing in the sacred area of Largo Argentina, this is one of the best places in the city where you find out how Rome is full of different layers. Rome is like a lasagna, with all the ancient layers and everything mixing in between.

If you look around you’ll see some of the modern buildings, to your left you’ll see a medieval tower, and just in front and down you can see ancient ruins. These were discovered almost by accident, a little over one hundred years ago and these are ruins that came from the Republic era of Rome, so they’re much older than the Imperial age—the ruins down here date between the 5th Century and the 1st Century BC. But most fascinating is a very important historical event that took place just where you see the theatre across the street, just to the left and underneath that theatre is where the Porticos of the Theatre of Pompey the Great used to stand —this is where the Senate was meeting in March of 44 BC, the Ides of March, where Julius Cesar was assassinated.

Julis Cesar was invited to the Senate to come and receive a crown as the King of the Orient. He walked up onto the steps of the Theatre of Pompey, the conspirators came from behind the statues, pulled out daggers from their togas and stabbed him 23 times. They keep stabbing him, and eventually he turns around and sees Brutus, a man who he had raised almost like a son—he famously says something like ‘e tu Brute’ or ‘and you Brutus/my son’, throws his toga over his head and falls to his death. Perhaps the most famous Roman of all time, lost his life just over there.”