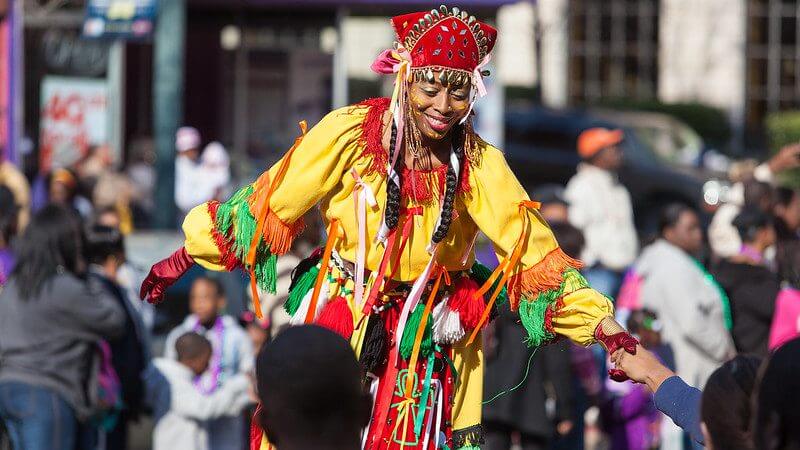 Carnival Celebrations Around The World: Vibrant Festivals You Shouldn’t Miss

As February rolls around again, Carnival jubilation is in full swing. From Venice to Rio to New Orleans, we take a closer look at one of the world’s most flamboyant and colorful festivals where (almost!) anything goes!

The Origins of Carnival

Carnival is an annual festival marked by celebratory street processions, music, dancing, and raucous reveling. The name “Carnival” (or Carnevale in Latin) translates to “farewell to meat”. It refers to the Roman Catholic practice of foregoing the consumption of meat (and milk, butter, lard, eggs, sugar and cheese) during the abstinence period known as Lent.

Typically, Carnival season begins on the Epiphany (January 6) and ends on Fat/Shrove Tuesday— one day before Ash Wednesday — the official start of the Lenten period.  Although customs and traditions vary from country to country (and in some cases, from town to town), one thing is certain: Carnival is a fun, anything-goes good time! 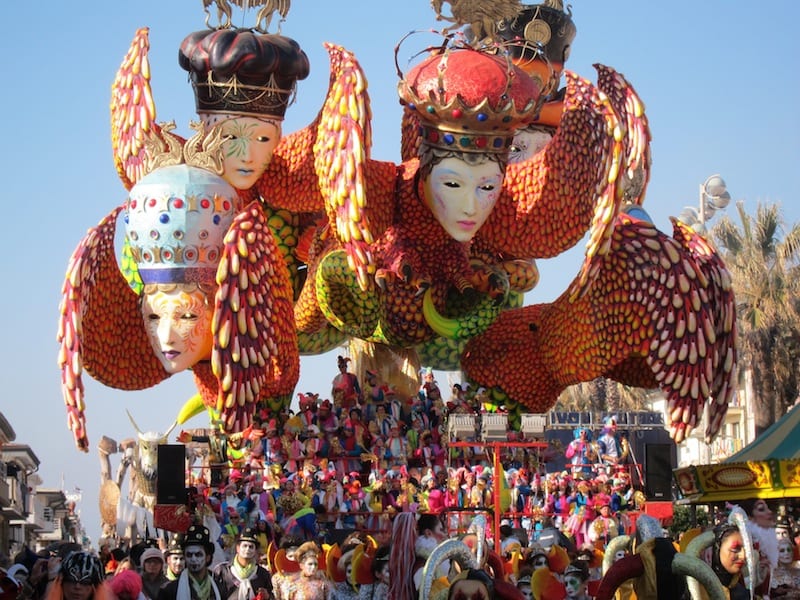 Carnevale is a feast or festa enthusiastically observed up and down the Italian peninsula. In nearly every town and village, you’ll find delighted children dressed up as fairytale characters and superheroes — flinging multicolored confetti (coriandoli) at anyone in their wake. But it’s the 17-day-long extravaganza in Venice (Venezia) that’s considered one of the most renowned and opulent in Italy. Read more about Venetian Carnevale traditions right here.

Thousands also flock to Viareggio each winter to experience the irreverent yet cheerful paper mâché effigies in the likeness of celebrities, politicians and famous sports figures. Some stand as tall as 30 meters (98 feet) high

See our article about Italian Carnival celebrations here or book a walking tour in Venice during Carnevale to experience the city in full swing! 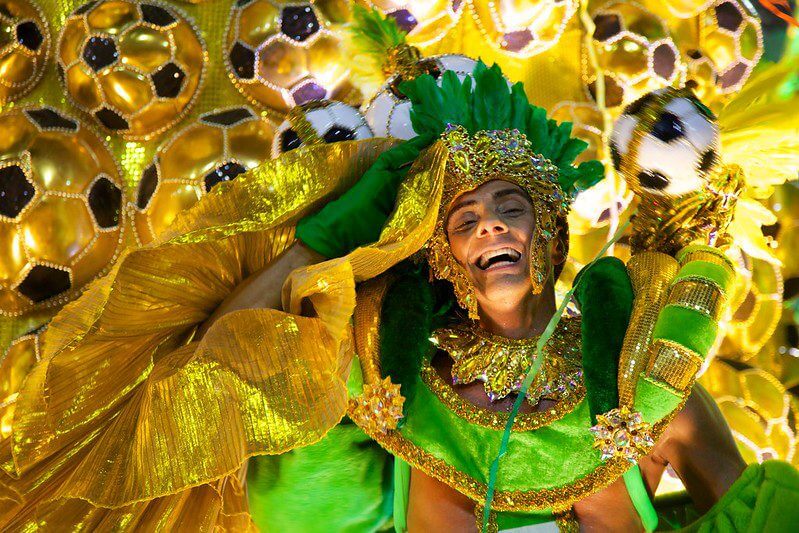 As colorful as Brazil itself, the city of Rio de Janeiro has long been synonymous with its acclaimed Carnival festival. Drawing millions of people each year, Rio’s Carnival is arguably the largest (and rowdiest) fiesta on the planet.

The streets are awash with the enticing vibrancy of costumed Samba dancers adorned in feathers and wings (and not much else!). During the impressive Sambodromo parade, countless Samba Schools battle for the distinction to be crowned the Rio Carnival Samba Parade Champions.

The undisputed gold standard for Carnivals in the US, Mark Twain once declared, “An American has not seen the United States until he has seen Mardi Gras in New Orleans.”

Commencing on the “Twelfth Night” (January 6 or the Epiphany), the city of New Orleans, Louisiana’s Carnival is a veritable blast. The much-anticipated jamboree climaxes on Mardi Gras with a cavalcade of themed floats and jazzy marching bands parading through the historic French Quarter.

All along the parade route, “Krewes” (members of secret societies who make the floats) toss trinkets into a crowd of spectators. The most popular “throws” include strings of shiny plastic beads (originally made from glass), faux coins (doubloons), toys, cups, and stuffed animals.

To experience the buzz of New Orleans with a local guide, check out our tours!

In Spain’s capital of Madrid, celebrations fill the streets on the Friday before Shrove Tuesday. A unique blend of Spanish and Latin American influences, Carnival de Madrid has all the usual pomp and grandeur, such as a parade along the Manzanares river and a masquerade ball.

One ceremony you might not expect is Entierro de la Sardina, the ‘Burial of the Sardine’. It’s the most popular and serves to wrap up the festival on its final day (Ash Wednesday). Setting out from Plaza de San Antonio de La Florida, the fishy funeral procession winds its way through the center, arriving at the point of the synthetic Sardine’s final resting place. In front of the Pajaritos Fountain at Plaza de las Moreras in Casa de Campo Park, a bonfire is lit to drive away evil spirits and promote happiness amongst the city’s denizens. 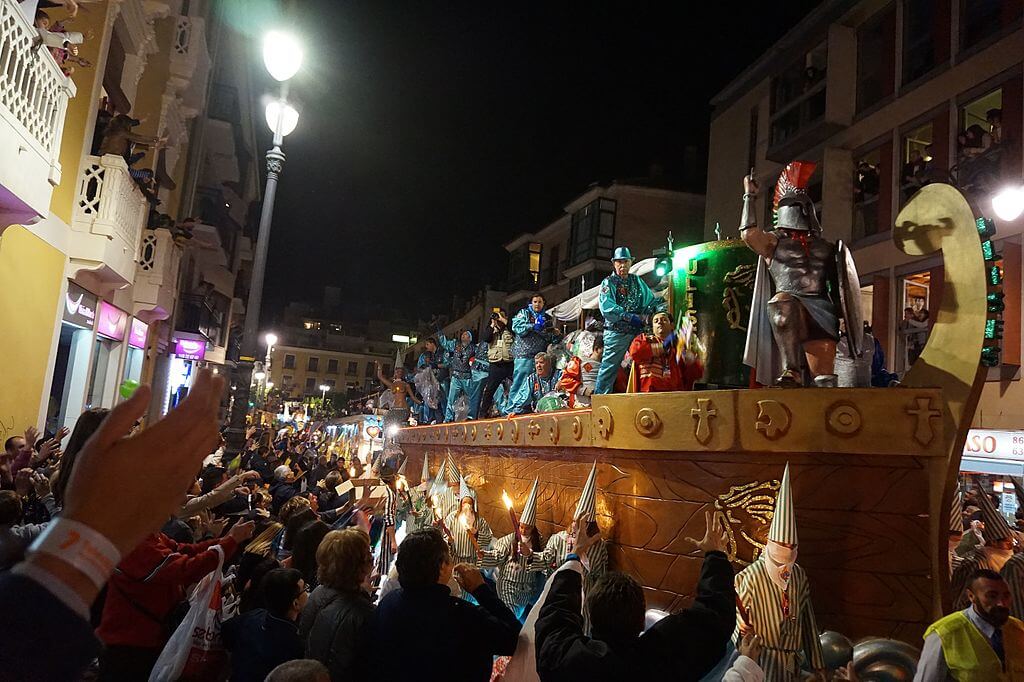 The ‘burial of the sardine’ precession in Madrid. Image Source: Bertobarc90, CC0, via Wikimedia Commons

While Barcelona throws a respectable Carnival (Carnestoltes in Catalan), it’s thought to be more low-key than others in Spain. Many attribute the restrained carousing to the fact that during the Spanish Civil War and Francesco Franco’s dictatorship, Carnestoltes was completely banned.

Madrid Carnival: February 17-22, 2023. For a program of events go to the city’s official website Turismo Madrid.

Uniquely Caribbean with African Calypso, Soca, and steelpan music filling the air, Trinidad and Tobago’s Carnival party or fete is held annually in the dual-island nation’s capital of Port of Spain.

Although technically touted to stretch through the traditional Carnival period, in truth, the official gathering that draws the most attention is the two-day street party beginning with the pre-dawn J’ouvert (French for “day opens). Slated for the Monday before Ash Wednesday, the off-beat parade’s participants turn out smeared in all kinds of body paint, motor oil, and mud — the messier the better! — to usher in the sunrise.

On Tuesday, the gaiety continues with a collective string of costumed marching bands (if you participate in one, it’s called “playing mas”). Dimanche Gras is the day’s final event in which eight men and eight women from various costumed bands are chosen to compete to be named the undisputed King and Queen of Carnival. 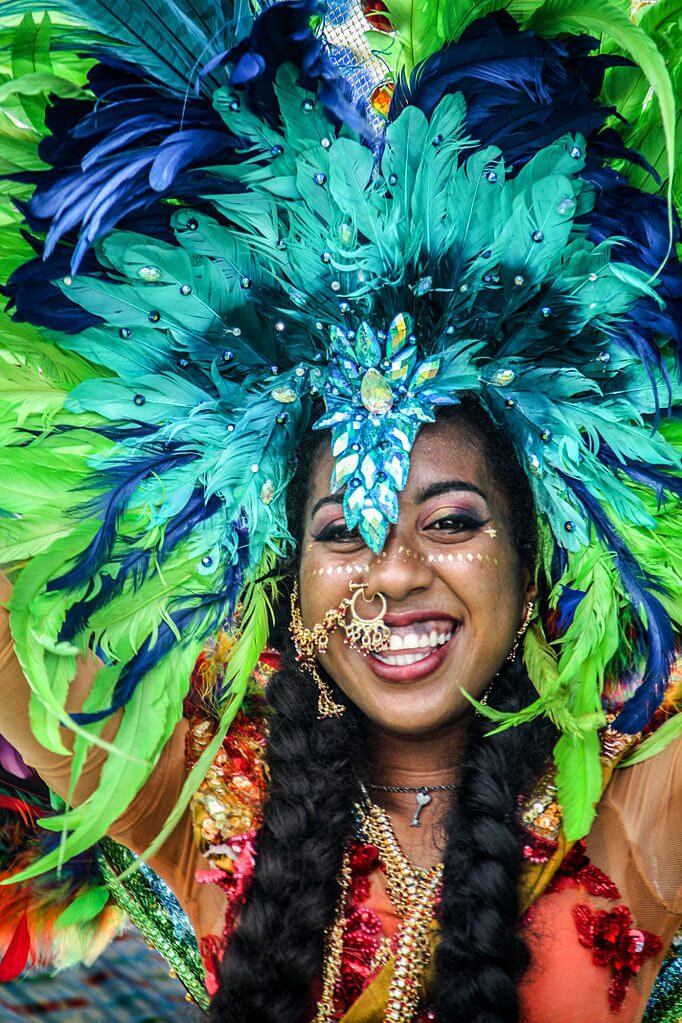 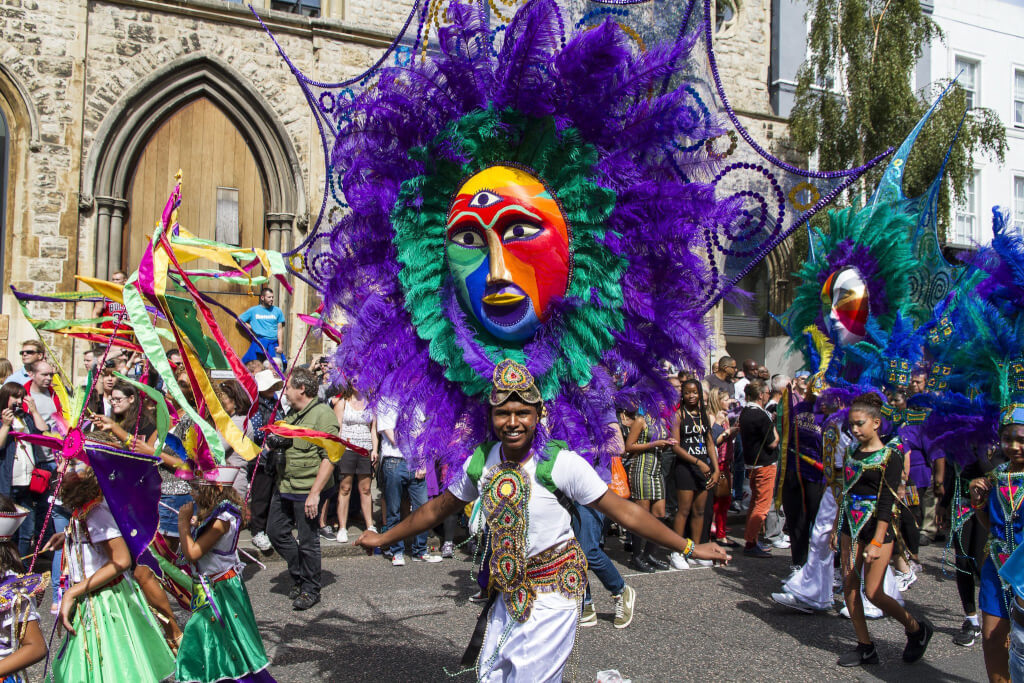 You might not normally connect Londoners with Carnival, however, in 1966 the Notting Hill Carnival was introduced and has been going strong ever since. Fashioned after the Trinidad and Tobago festival (see above), it pays homage to the community of Caribbean and West Indies people who migrated to the area after WWII.

The event is huge, drawing nearly two million visitors a year. Produced in late August rather than in February or March, perhaps the timing was chosen to ensure warmer temperatures for adorning traditional bikini-like costumes?

2023 dates have yet to be announced, but the event typically takes place in August. Check out their official website for information.

The Canary Islands are a Spanish archipelago off the coast of Africa just west of Morocco. Two of the splashiest Carnivals take place in the islands of La Palma and Tenerife.

The Los Indianos parade is a highlight for residents of Santa Cruz de La Palma. All dressed in white with Havana-style straw hats atop folks’ heads, the Caribbean-inspired street bash recreates a time when wealthy Cubans immigrated to the island. After a night of merriment, a light-hearted talcum powder fight ensues. 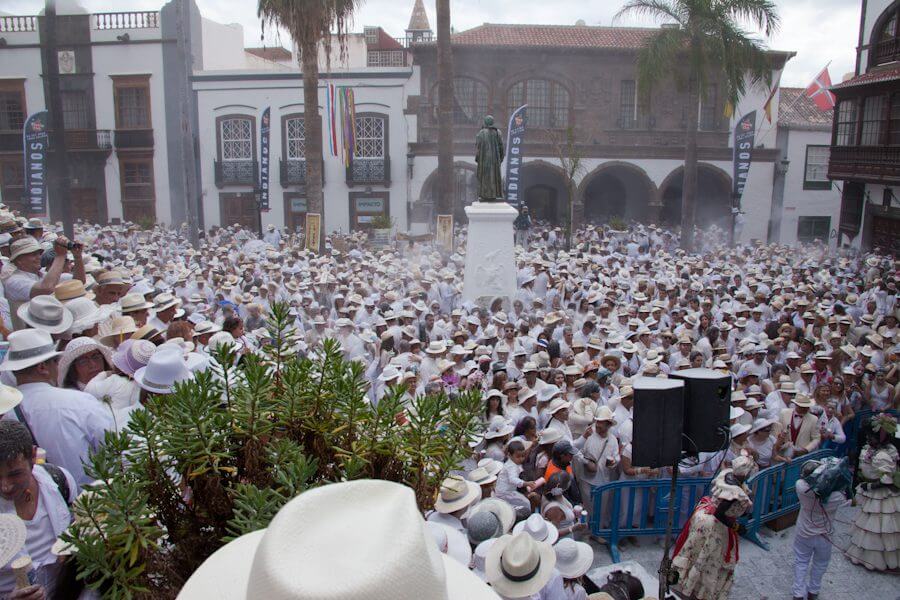 Spanning three weeks, the Carnival of Santa Cruz de Tenerife is the closest in style and substance to its Rio de Janeiro counterpart. Think feather headdresses, scantily clad bodies dancing to the thump of Samba and Salsa music. Massively popular, it’s important to book ahead.

Most historians agree that pre-Lenten celebrations of Carnival predate Christianity. In Croatia, the Rijeka Carnival (Riječki Karneval) is believed to be based in spring equinox festivals of Serbian tribes that once inhabited the northern region of the country.

The port city of Rijeka, the third-largest in Croatia, hosts what is considered the largest and brightest Carnivals not only here but in the whole of Europe.

The Shrovetide season normally kicks off on the Feast of St. Anthony the Great (January 17) with a group of men dressed in animal skins ringing bells called Zvončari (in 2009, the practice was added to UNESCO’s list of Intangible Cultural Heritage of Humanity). The display is followed by the Queen Pageant, buoyant floats, masks and confetti-throwing and even an adorable children’s parade in which nearly 5,000 little ones participate. 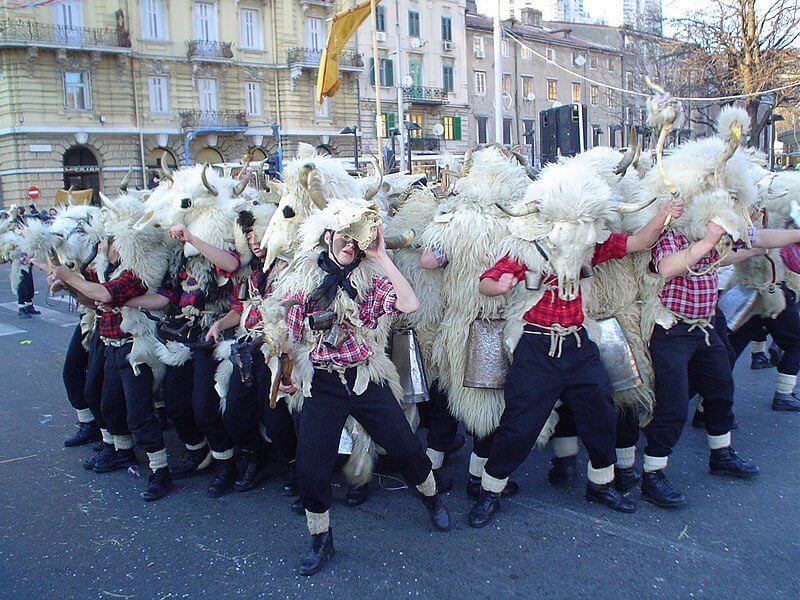 The festival finishes nearly a month after it starts with a grand parade along the famed Korzo promenade the Sunday before Ash Wednesday. At the end is the burning of the “Pust”: a scapegoated puppet symbolizing the ridding of all the bad things from the previous year.

All About The Food: The Tastes of Carnival

Here are a few pre-Lenten treats not to be missed!

Venice (and all over Italy)

Read More: The best places to celebrate Carnival in Italy