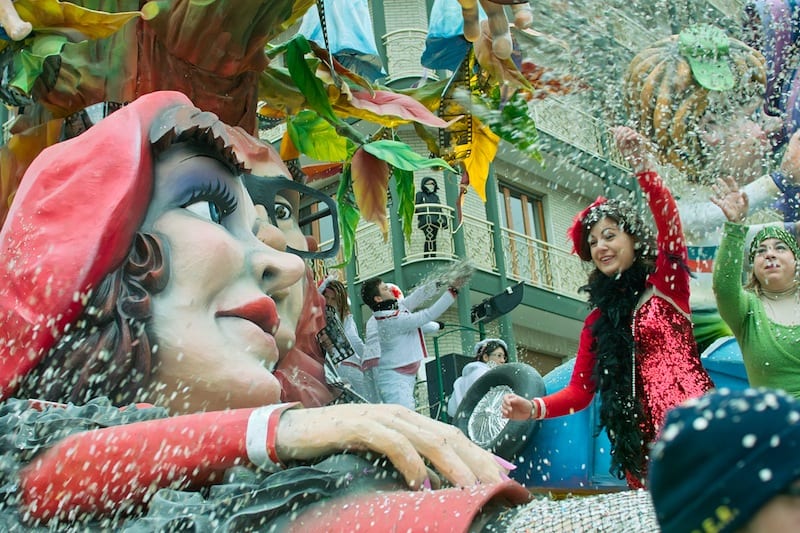 The Best Places to Celebrate Carnival in Italy (Beyond Venice!)

Carnival in Italy (or “Carnevale”) is a huge winter festival, usually complete with masks, parades, music and parties. Starting as a final celebration before Lent begins, Carnevale is as popular in Italy now as it was in the 1200s, with thousands of Italians and visitors from all over the world coming to see Italy dressed in full costume.

(Carnevale launches on different dates every year, usually in February/March. But the party starts much sooner!).

The most famous Carnevale celebration takes place in Venice (don’t miss our post to find out all about celebrating Carnival in Venice!). But Venice certainly isn’t your only option. Carnevale is celebrated throughout all of Italy, with each city being sure to add its own personal touch to the traditional party.

Visiting Italy during Carnevale? Take a look at our list and choose from the biggest, most elaborate celebrations in Italy:

Viareggio, located on the Tuscan coast, has one of the largest Carnevale celebrations in all of Italy. It lasts for multiple weekends, so it’s easy to find a date to visit. Head to Viareggio to see the long, lively parades, known for their huge paper mâché caricatures of politicians, animals and other figures and floats that get more and more elaborate each year.

Admission is charged to view the parades, but other festivals, cultural events and concerts are offered nearly non-stop in the weekends leading up to Lent. The master puppeteer, towering over the crowds in Viareggio. Photo by Giulia (Flickr)

Bonus: Viareggio is just a quick and inexpensive train ride from Pisa, Lucca, Siena or even Florence!

Carnevale (and the Battle of the Oranges) in Ivrea, Piedmont The battle represents a local uprising in 1194 against the imperial power. Photo by Giò-S.p.o.t.s. (Flickr)

Ivrea, located in Piedmont, might just have one of the most particular Carnevale celebrations in all of Italy. Every year, the colorful parade ends in a huge orange-throwing battle in the center of town that fills the city with the smells and colors of the oranges. Put on a red hat to show that you won’t be throwing any oranges—which might not totally protect you from flying fruit, but should help!

Dates: The traveler to Italy is in luck, since Ivrea’s carnival has a huge range of dates to offer! Events take place throughout the month. Check out the website here to get read more about this historic tradition.

Bonus: If throwing oranges at strangers isn’t enough, after the festivals you can follow the Via Francigena to tour the beautiful Valle D’Aosta or head 40 minutes in the other direction to visit Turin. (Read more about both in our post on Italy’s best winter wonderlands!). Acireale’s Carnevale is considered one of the most beautiful carnivals in Sicily. Parades take place in the town’s Baroque historic center, with allegorical paper mâché floats and famous flower floats. The flower floats feature characters and images made exclusively with flowers, adding both beauty and a lovely scent to the festivities!

The celebrations also include music, chess tournaments and a fireworks finale to end the carnival season. Check here for dates and to see if the parades will have flower floats, allegorical floats or both.

Bonus: Acireale is on the beautiful island of Sicily, between the coast and Mount Etna. It’s also likely to be the warmest Carnival celebration you can find in Italy this time of year.

Carnevale in Putignano, Puglia: the longest-running Carnival celebration in Italy Everyone is a participant during Carnevale! Photo by Roberto (Flickr)

Puglia has more Carnival celebrations than any other region in Italy, but special mention goes to the Carnevale of Putignano for being Italy’s longest and possibly oldest celebration! For locals, the season starts early on December 26th and finishing on Fat Tuesday, the day before Lent begins. The 26th marks the Festa delle Propaggini, where poets speaking in local dialects take turns reciting satiric rhymes against politicians, powers and social news or habits for hours on end. The parades begin in February.

Bonus: Putignano is near the sea in the beautiful province of Bari. Visit the famous grottos nearby, such as the Castellana Caves, or take a short road trip to scenic and traditional Lecce! (Don’t miss our post on Puglia in pictures: why head to Italy’s heel now!).

Carnevale in Italy is all about fun! It’s the last hurrah before the more serious and less frivolous Lenten period, and it’s celebrated in exactly that way. The more vin brulee, sweets, costumes and parties, the better!

So join in the festivities but be careful, because “a carnevale ogni scherzo vale”—at Carnival, anything goes.

4 responses to “The Best Places to Celebrate Carnival in Italy (Beyond Venice!)”