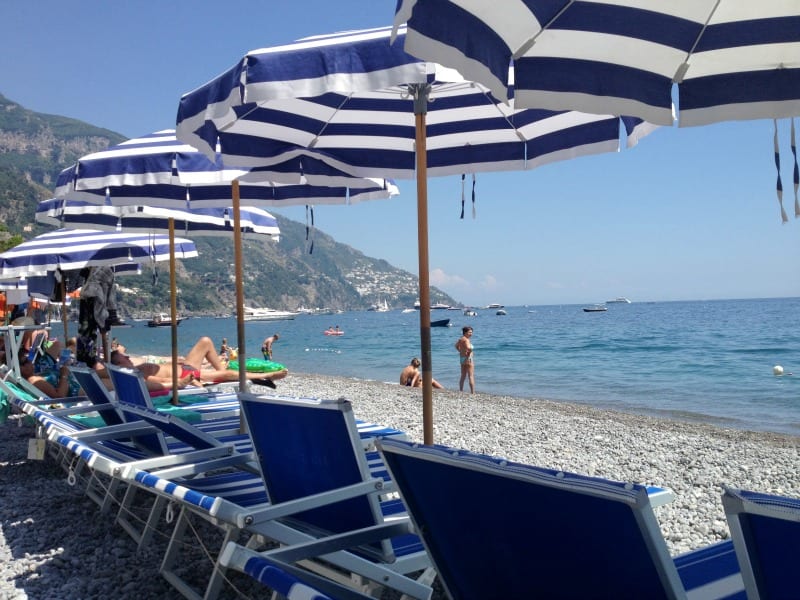 Coming to Italy in August? 5 Things to Expect

If you’re experiencing August in Italy, you’re not alone! Since it’s when kids are out of school and the idea of vacation is on everyone’s mind, lots of travelers visit Italy in August. But there are some things you have to be prepared for.

Here are five things to keep in mind before you head to Italy in August.

The weather in Italy in August

In short: dry, sunny, and hot. On average, August is a little cooler than July—but not by much. The monthly average temperature for Rome is a high of 87° F, a low of 62° F. Although Rome is in southern Italy, the temperatures are remarkably similar in those other two famous destinations, Florence and Venice: In August, Florence has the exact same range, while Venice has a high of 80° F and low of 63° F. For the past couple of summers, it’s been even hotter than that.

So pack your light layers, and be prepared to be on the warm side! (Here are 10 tips for surviving the heat in Italy).

In the cities, stores and restaurants close during ferragosto—and before ferragosto, and after ferragosto 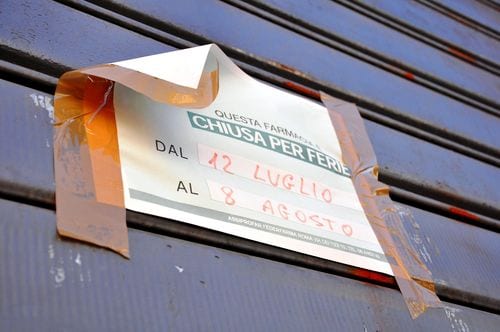 This pharmacy is closed from July 12-Aug. 8. Hey, that’s not ferragosto…

Ferragosto, the traditional holiday dating back to the time of Emperor Augustus, technically runs from Aug. 15 to Sep. 1. That’s when Italian families tend to take their holidays, and when stores and restaurants (particularly the smaller, family-run establishments) often are closed.

But while Aug. 15 is a national holiday, the rest of the vacation is up to interpretation. Result? Some establishments close as early as mid-July. Others stay open through the entire summer. Some close for a week; others for a month.

In other words? If you’re coming to Italy in late July, August, or early September, be prepared to be flexible, particularly if you’re headed to one of Italy’s big cities. And plan ahead. If there’s a restaurant you want to try, have your hotel call in advance to make sure it’s actually open. Likewise for small shops you’ve been wanting to try.

Even though many Italians leave the cities, you won’t have them to yourself 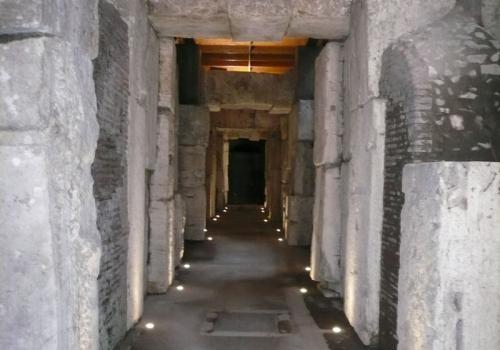 Here’s one good way to get away from the August crowds at the Colosseum: visit the underground!

Lots of international tourists come to Italy in August. So even though many local neighborhoods, particularly those out of the center, will be very tranquil, the trodden tourist path won’t be. In fact, it’s when sites like the Vatican museums and Uffizi gallery will be at their most crowded.

We’re proponents of seeking out off-the-beaten-path gems, or of trying to see famous sights in a “new” way, year-round (check out our new Vatican City Tour with Gardens, Museum & Castel Gandolfo by Train experience as just one example!). But that’s even more worth considering in August’s crowds.

Tourist sites (and tourist traps) will be open in August

Although having many of the small shops and restaurants closed in Italy’s cities might throw a cramp in your plans, you don’t have to worry about major museums and tourist sites closing. While some (like the Vatican museums) might close on Aug. 15 and possibly Aug. 16, many others don’t. And they certainly don’t close for all of August. Rome’s Colosseum and forum, for example, are open every day in August.

Touristy establishments also tend to be open in August. You know what we mean: the restaurants right on Piazza Navona, the cafes on St. Mark’s Square, the souvenir shops outside of Florence’s Duomo. Of course, that doesn’t mean you should eat at them. You definitely won’t be alone on an Italian beach in August!

If you’re heading to, say, Sardinia, Sicily, Capri, or the coast of Puglia, instead of mainland, land-locked Italy, then you’ll be in luck: Italians come here on their August vacations, so stores and restaurants will be open. But that also means that some of those islands and towns will be packed. And their beaches will be, too!

85 responses to “Coming to Italy in August? 5 Things to Expect”