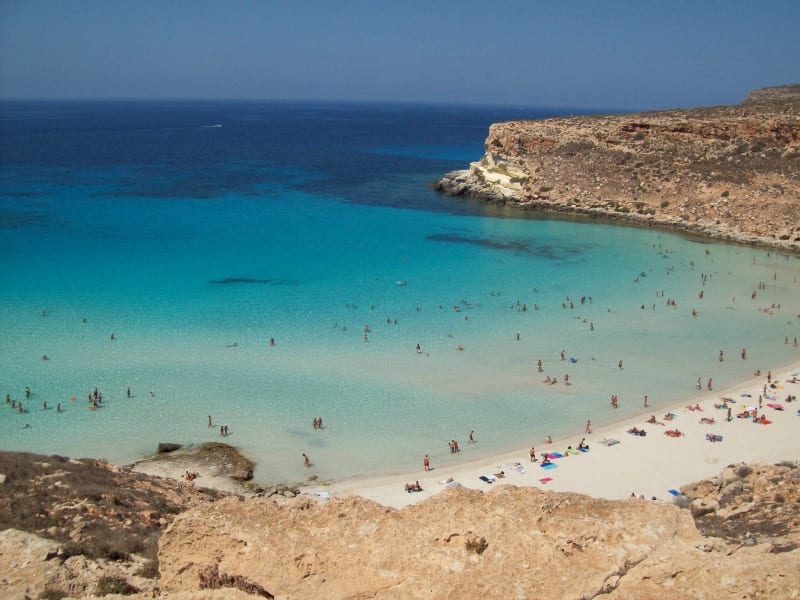 The Best Beaches in Italy

Want to head to the beach in Italy? Great idea! With more than 5,000 miles of coastline, Italy boasts hundreds of beautiful beaches.

Here are 12 of our favorite beaches in Italy. Have another beach you like? Share it with us in the comments below! You’d be forgiven if you thought this was in the Caribbean! This Mediterranean gem, with its crystal-clear sea and splendid stretch of white sand, recently won the “Best Beach in the World” award from Tripadvisor users.

Located on the island of Lampedusa, off the southern coast of Sicily, Rabbit Beach requires a short walk through rocky and uneven paths. It’s an effort, of course, that’s worth the reward! Just remember, with all the raves the beach has been getting, it’ll be very crowded in the summer. The beach at La Feniglia in Tuscany’s Maremma

Tuscany might be known for its rolling hills—but there are stunning beaches here, too. In the southern part of Tuscany, known as the Maremma, you’ll find La Feniglia, a 4-mile stretch of golden sand beach that connects Argentario to the Tuscan mainland.

On one end, near the beach entrance, La Feniglia offers services like umbrella and chair rentals. But if you want to enjoy the beach for free, just head to the other side, which is a protected nature reserve.

Another “cool” feature of La Feniglia: the Mediterranean pine trees, offering the option of some much-welcome shade. Go off the beaten path in Positano… and head to Fornillo, one of our favorite beaches in Italy

While most visitors to the Amalfi coast’s Positano head to the swanky Spiaggia Grande, in-the-know visitors—especially those in search of peace and quiet—beeline to Fornillo Beach, just a 10-minute walk away. (Bring your camera, since the walk alone affords breathtaking views!).

And who says spectacular beaches have to be sandy? Fornillo’s pebbled stones give the beach its charm. And the view of the Amalfi coast’s iconic cliffs, not to mention a Norman tower, make it even more picturesque. Better yet, Fornillo is generally quiet and peaceful… although it can get crowded in summer months. After all, this is Positano! (If you’re headed there, don’t miss our post on how to get the most out of the Amalfi coast!). One of the best beaches in Italy, at Sicily’s San Vito Lo Capo

In Sicily’s northwest, near the Nature Reserve of the Zingaro, the beach at San Vito Lo Capo has consistently been rated as one of the best beaches in Italy. Its picturesque setting—including a view of Mt. Cofano, crystal-clear water, and fine sand—make it a favorite spot for many Italians. And the water often is so calm, taking a dip feels like swimming in a pool!

And that’s not to forget the charming town itself: Quaint and resort-like, it buzzes with visitors during the summer months.

When it comes to great beaches, you’re spoiled for choice in Sardinia, the large island off Italy’s western coast. But with its sparkling water, powder-white sand and lush Mediterranean vegetation, the beach at Su Turiarzu has to be one of Sardinia’s best. And don’t just take our word for it: The beach recently received the “Five Sails Award” from Italy’s environmental association Legambiente and the Touring Club’s “Guida Blu.” It’s also rated as the best beach in Italy for its water quality and environmentally-friendly initiatives.

Situated in the medieval town of Posada on the east coast of Sardinia, it is easily accessible and thanks to its shallow waters, an ideal spot for families with children. While here, don’t forget to soak in the rich history and culture of one of the oldest towns on the island. Puglia, the region in the heel of the “boot” of Italy, boasts hundreds of stunning beaches. One of our favorites is Baia dei Turchi, just north of Otranto. A short walk through a pine forest, all part of a protected nature reserve, rewards you with a sandy stretch of  beach that also happens to be one of the cleanest in the country (hence its Blue Flag status).

And there’s history here, too: The name the “Bay of the Turks” goes back to the 15th century, when the Turks landed here to siege the city of Otranto.

(Don’t miss our post on Puglia in pictures: why head to the heel now!).

You won’t find any rented lounge chairs at Punta della Penna, a wild, remote beach north of Vasto. But what you see here is even better: a free, silken sand beach inside the Natural Reserve of Punta Aderci, in the central region of Abruzzo.  (Trying to wrap your mind around Italy’s 20 different regions? Don’t miss our quick and easy guide to Italy’s regions!).

If you’re seeking a real escape, and looking for a pristine beach, it’s one of a few hidden gems on this coast. Stick around until sunset for a seriously stunning sight.

Tropea, home to one of the finest beaches in Italy. Photo by Belsito (Wikicommons)

Billed as the “Pearl of the Tyrrhenian,” Tropea Beach, in the region of Calabria, is nothing short of spectacular. Famous for its white sandy beaches, warm crystal water, and the old town on Tropea perched on the dramatic white cliffs, its setting is postcard-perfect. While unknown to most visitors, the natural beauty of  Tropea Beach makes it a top beach destination for most Italians.

On the very tip of the Salento Peninsula, Marina di Pescoluse, though relatively unknown to foreigners, is a favorite haunt for Italians. Boasting a 5-mile stretch of fine golden sand and shallow, crystal-clear waters, it’s so much like the Maldives, locals even call it “Le Maldive.” Its calm waters make it ideal for children and families.

Make sure you catch the beach at sunset: Like magic, the sand banks suddenly look like islands.

(Don’t miss our post on what to eat in the Salento peninsula!). This crescent-shape beach in Variggoti, on the Italian Riviera, features sparkling sand and calm, crystal water—perfect for sunbathing or swimming. Surrounded by vegetation and overlooked by the medieval church of San Lorenzo, Baia dei Saraceni is one of the most picturesque beaches in Liguria. Even better: Unlike most beaches along the coast, the beach at Baia dei Saraceni is completely free. Looking for a secluded spot? Few beaches compare with Due Sorelle (Two Sisters), situated on the Adriatic coast in Le Marche’s Conero Natural Reserve. Distinguised by two twin rocks just off the shore (i.e., the “two sisters”), the beach’s wild, untouched setting makes it the perfect place to get away from it all.

Which means that getting here takes some effort. You have to come by boat. Or you can put on your walking shoes: You also can get here via a challenging path descending from a mountain known as “Wolf’s Pass.”

Just remember, Due Sorelle is a free beach, so there are no facilities here. But we’ll trade that for some transparent water lapping the white-pebbled beach any day.

(By the way, the Le Marche region boasts more than beaches. Here are 6 things to love about Le Marche!). The Cinque Terre is better known for its hiking paths than beaches. But Fegina Beach makes our list, thanks to its gentle cobalt water and golden sand. In the new town of Monterosso al Mare, La Fegina is the largest stretch of sandy beach in the Cinque Terre, and offers a stunning, unimpeded view of the coastline. Plus, it’s the perfect place to catch the sunset.

The establishments here offer sun loungers and facilities, but the free beach is clean and well-cared for, too. It’s also super-convenient, located just a stone’s throw away from the train station. Expect a lively atmosphere, as its promenade is lined with numerous seaside hotels, restaurants and cafes.

Looking for a beach a little more convenient to where you’re staying? Don’t miss our post on the best beaches near Venice, Florence, and Rome!

10 responses to “The Best Beaches in Italy”