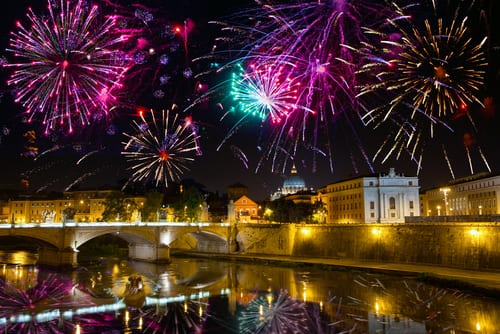 If you’re planning to travel to Italy, knowing the calendar of holidays is important. Not only can you take advantage of special events that way, but sometimes, museums, stores and restaurants will close (especially on January 1, May 1 and December 25).

Here’s the calendar of the most important Italian national holidays… and how to celebrate them!

January 1: After a long night of ringing in the new year, many Italians take January 1 off to relax, get out of town… and sleep in! Some sights will be open, but always double-check, since most state-run attractions (as well as stores and restaurants) will be closed. Christmas markets, like the one in Rome, often remain open up until the Day of the Epiphany

January 6: The Epiphany, celebrated as a national holiday, marks the 12th and final day of Christmas. Especially in Rome, one particularly popular tradition is that of la befana, a witch on a broomstick who brings candy and coal to children in their stockings the night before. (Don’t miss our fun video about la befana for more!).

February 14: Valentine’s Day, better known as the “Festival of Lovers” in Italy, is not just known for love; its roots date back to the Roman empire! But if you do have love on your mind, there are lots of romantic experiences to choose from in Italy, like a hot air balloon ride in Tuscany or a spending the night in a castle. (Check out our guide to the most romantic experiences in Italy for more exciting options!). Carnevale: Italians prepare for Lent (the 40 days of abstinence before Easter) by indulging in lots of sweet treats and throwing a lively party. The most popular Italian destination for Carnival is undoubtably Venice for the lavish costumes and masks worn even a week before the celebration. Dates vary each year, depending on what date Easter falls on. (Here’s where to learn all about Venice during Carnevale!).

March 8: If you’re in Italy in early March, you may notice yellow mimosa flowers, well, everywhere! These flowers are given to women in honor of la Festa delle Donne (International Women’s Day), which also comes with other perks for women—like, often, free entrance into some national museums and attractions. The Pope’s Good Friday vigil in Rome, a popular event for those in Italy at Easter

Easter: The date of this widely-celebrated religious holiday varies sometime between March and April, based on the Gregorian calendar. Regardless of exactly when it falls, the week leading up to Easter Sunday attracts tourists from around the globe, especially to the Vatican, making it one of the most crowded (and potentially expensive) periods of the year for travel to Italy.

Want to celebrate Easter like the Italians? A traditional Easter meal comes complete with lamb and colomba sweet bread. On Easter Monday (called Pasquetta), the festivities continue with friends getting together and heading to a park or the countryside, usually for a picnic. (Here are five things you have to know about Easter in Italy!).

April 25: Italians remember the end of World War II with the Festa della Liberazione. Many extend the holiday to Labor Day on May 1, taking a vacation to enjoy the start of spring weather.

May 1: The first of May marks Labor Day, and one of the few holidays in Italy where almost all museums and shops in Italy are closed.

June 2:  The Festa della Repubblica marks the birth and unification of the Italian Republic. If you can, head to Rome for this national holiday—that’s where you can enjoy the holiday’s huge, patriotic military parade. The beaches of Sardegna, a popular destination for Italians over ferragosto

August 15: This marks the official beginning of ferragosto, when Italians close up shop and, traditionally, head to the beach or mountains. While traditionally the official start of summer, now many Italians also take vacation before or after the holiday. (Here are five things to know before traveling to Italy in August!).

November 1: Halloween is not widely celebrated in Italy, but November 1st is a national holiday known as Ognissanti (All Saint’s Day) that celebrates the lives of saints.

December 8: This holy day and bank holiday commemorates the Immaculate Conception of Mary. (That’s not something that has anything to do with the birth of Christ, by the way; it’s just the day when the Church decided that, in fact, Mary was born without the stain of original sin). The Day of the Immaculate Conception is often considered the start of the Christmas season, when lights and nativity scenes go up and world-famous Christmas markets commence. December in cities like Florence comes with perks, including Christmas markets!

December 25: Christmas is a wonderful time to visit Italy, thanks in large part to the gorgeous decorations and festive atmosphere. Prepare for Christmas like a real Italian with a fish dinner on la Vigilia (Christmas Eve), followed by midnight mass! Christmas Day is celebrated with a large lunch with family and almost all museums, stores and restaurant are closed.

December 26: The day of Santo Stefano (Saint Stephen), the day after Christmas, is also a national holiday. (Discover more Christmas traditions with our guide!).

December 31: New Year’s Eve is one of the most important celebrations in Italy; you’ll find piazzas full of strangers celebrating together at midnight with fireworks lighting up the sky! Across the country, the coming of the new year brings some strange traditions, too, like throwing pots and pans out the window and eating cotechino (pork sausage) with lentils on New Year’s Day for good luck.

Local holidays in traditions in Italy’s biggest cities: Although there are a lot of national holidays on the Italian calendar, they’re not the only times that Italians celebrate (and, sometimes, take off work). From large cities to small towns, Italians honor the patron saint of their home town each year by taking the day off and celebrating with events like parades and markets. Some of the most popular local festivities include April 25th in Venice (Saint Mark), June 24th in Florence, Genoa and Turin (St. John the Baptist), June 29th in Rome (Saints Peter and Paul), September 19th in Naples (Saint Gennaro) and December 7th in Milan (Saint Ambrogio).

Be honest; how frequently do you happen upon an item in your home that you'd love to discard, but...

Christmas is a major holiday in Italy… which means Italians celebrate lots of great,...