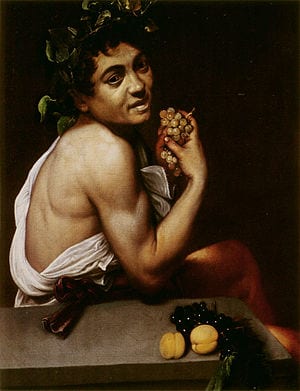 Caravaggio’s Crazy Life: The Art of an Infamous Italian Scofflaw Caravaggio’s “Boy with a Basket of Fruit,” one of his first paintings

As well as a scofflaw and murderer, 17th-century Italian painter Caravaggio was one of the most thrilling, and ground-breaking, artists in Italy. And his paintings—which changed Italian art history forever—tell the fascinating stories, and hint at the personal torment, behind the artist.

So here are a few of our favorite Caravaggio paintings in Italy. Because this Baroque bad-boy has such a fascinating life story, we’ve organized our list according to when he did them… and what his motivations might have been.

Born in 1571, Caravaggio grew up in Caravaggio, Italy, just outside of Milan. That’s not a coincidence: His real name actually was Michelangelo Merisi, but partly to distinguish him from that other famed Michelangelo, the artist went by the name of his hometown. (That’s not unusual, by the way: Cortona-born artist Pietro da Cortona, for example, was really named Pietro Berrettini).

From a young age, Caravaggio was a trouble-maker. So much so, in fact, that at 21 years old, he fled Milan—already having gotten into numerous brawls and even having wounded a police officer. He came to Rome, where he got a job painting in the workshop of Giuseppe Cesari (known as the Cavalier d’Arpino), mostly focusing on adding flowers and fruit to the paintings done by the pope’s favorite artist. But Caravaggio did his own paintings, as well. And even though he was still young—only in his early 20s!—the ways in which Caravaggio would change art history already were clear.

Just take his self-portrait as the “Sick Bacchus,” located in Rome’s Borghese Gallery, left. Painted a couple of years after Caravaggio came to Rome, it shows the skills he’d picked up in d’Arpino’s workshop, particularly with the attention to detail and near-photographic realism of the fruit and leaves. (Around the same time, he painted “Boy with a Basket of Fruit,” at top—also in Rome’s Borghese Gallery—which is even more stunning in its depiction of vegetation and fruit).

But the “Sick Bacchus” shows something else, too: that life was already rough for Caravaggio. We know that, early in his Rome stay, Caravaggio fell extremely ill—some believe of malaria—and spent six months in the hospital. It’s thought that he completed this painting around that time period, which explains the figure’s greenish skin and sickly expression. More interestingly still, Bacchus is, of course, the god of wine and partying. But Bacchus is usually shown rosy-cheeked and reveling. Not here. In a way, this painting could be said to be a depiction of what all that revelry feels like the “morning after.”

And that’s something Caravaggio knew a lot about—although his biggest problems with drinking and brawling were yet to come. In 1594, Caravaggio left d’Arpino’s studio and struck out on his own. He met other artists in Rome that would prove incredibly influential to his career—and, less fortunately, to his personal life: One, the architect Onorio Longhi, helped Caravaggio get sucked into Rome’s underbelly of street brawls and fights.

This is when Caravaggio painted “The Fortune Teller,” today in Rome’s Capitoline Museums, which, in typical Baroque style, has much more to it than meets the eye.

At first glance, it simply looks like a girl telling a wealthy boy’s fortune. Look closer and you see that, while she’s “reading his palm,” she’s also… removing his ring. This theme of foppish youths falling victim to street-wise opportunists is one that Caravaggio would return to in other paintings, too. And it’s not surprising that the street-smart artist would find it a theme that he liked. At this point, in fact, Caravaggio was so poor he sold the painting for only eight scudi, a complete pittance. The good news? The painting wound up in the home of a wealthy banker who not only wound up being a patron for Caravaggio, but who introduced him to his friend, Cardinal Francesco Maria del Monte. In 1595, del Monte took Caravaggio into his household.

Del Monte wound up commissioning more than 40 paintings from the young artist—including the “Bacchus,” left, today in Florence’s Uffizi Gallery. This was a real chance for Caravaggio to show off his skills: There’s that gorgeously-depicted, realistic fruit and foliage and the extreme contrast of light and dark.

And, of course, there’s the attractive young man (who is, by the way, Caravaggio’s close friend and companion, the teenager Mario Minniti—who happens to be the same model in “The Fortune Teller” and the “Boy with the Basket of Fruit,” both above). This isn’t unusual: Many of the paintings that Cardinal del Monte commissioned from Caravaggio depicted somewhat effeminate, sensual-looking men. The Cardinal was known for throwing dinner parties complete with young men dressed as women, so… it’s not all that surprising.

Although this “Bacchus” seems healthier than the earlier one, it’s still humorous: The youth has flushed cheeks and a sleepy expression. And even though he’s meant to represent a Greek god, he’s wearing contemporary clothing… not to mention has dirty fingernails and lies on a dingy bedsheet. A romanticization of Greek myth this is not!

Despite his increasing success, Caravaggio’s personal life remained tormented. He According to one of his biographers: ”after a fortnight’s work he will swagger about for a month or two with his sword at his side and with a servant following him, from one ball-court to the next, ever ready to engage in a fight or argument, with the result that it is most awkward to get along with him”. (The sword was illegal – as with guns today, one had to have licence to carry arms.) Caravaggio was arrested repeatedly for, among other things, slashing the cloak of an adversary, throwing a plate of artichokes at a waiter, scarring a guard, and abusing the police.

Caravaggio’s technique was as spontaneous as his temper. He was constantly getting into trouble for his drinking and his temper, and arrested in Rome numerous times. His offenses included—among others—carrying a sword without a license, throwing a plate of artichokes in a waiter’s face, abusing the police, and scarring a guard. His worst offense, though, was yet to come.

But it was in this turbulent time period that Caravaggio painted one of his most arresting works: “Judith Beheading Holofernes,” today in the Barberini Gallery in Rome. The high emotions and violence in the painting are quintessential Caravaggio. And this was a guy who knew violence. His own brawls aside, he’d also recently been to see the execution of Beatrice Cenci, a 22-year-old Roman noblewoman accused of murdering her own father, who was beheaded publicly by sword. Another telling part of the painting: Judith is probably modeled on a Roman courtesan who posed for some of Caravaggio’s other paintings, as well. It was hardly typical—or proper—for artists at the time to use real-life models, especially prostitutes, for their depictions of saints and Biblical figures. But, true to form, Caravaggio hardly cared. But Caravaggio’s biggest career break was yet to come. In 1599, the Cardinal helped him procure a commission at the Church of San Luigi dei Francesi in Rome: Caravaggio was to decorate the Contarelli Chapel with three images of Saint Matthew.

In typical Caravaggio style, these paintings weren’t just stunning—they were ground-breaking… and scandalous! One, in fact, actually was rejected by the church and had to be redone. That’s the “Inspiration of Saint Matthew,” at right (this is the redone version!). The original was too controversial largely because the sensuous, adolescent angel looked like it was snuggling Saint Matthew—in a near-erotic fashion—and because the saint’s bare feet and crossed legs made him look common, pretty scandalous in a time when saints were depicted as noble and perfect. Although Caravaggio puts more-proper space between saint and angel here, he hardly steers away from controversy altogether: The saint’s feet are not only still bare, but dirty.

Controversies aside, these canvases launched Caravaggio into the limelight. Back then, nobody was painting with anywhere near his sense of realism and drama. Caravaggio’s “Madonna and Child with Saint Anne,” in the Borghese Gallery

Other commissions flooded in. One of our favorites from this time period is the “Madonna and Child with Saint Anne,” currently in the Borghese Gallery in Rome. Again, Caravaggio shows his scandalous side with this painting—which was rejected by its commissioners, who wanted it for a chapel in Saint Peter’s Basilica. Saint Anne, for example, looks like a beggar woman, and anything but saintly. The Madonna is leaning over Christ, her breasts pushed up, and was speculated to have been modeled on a Rome prostitute.  Both are barefoot. And Christ himself is fully nude—fine when he’s a babe in arms, less so as an upright, standing child!

Even though everyone in Rome knew Caravaggio’s name by now, he still couldn’t manage his personal demons. On May 29, 1606, he got into a brawl over a tennis match and killed a young man. He’d been protected by his well-placed patrons before—but this was more than even a cardinal could handle. Outlawed, Caravaggio was forced to flee Rome.

The most desperate part of his life, and possibly the most fascinating in terms of his artistic output, was only just beginning.

Check back for our follow-up post on Caravaggio’s life and works! And if you find the stories behind the art as fascinating as we do, check out our fascinating Borghese Gallery experience, which includes a look at many of Caravaggio’s most important paintings.