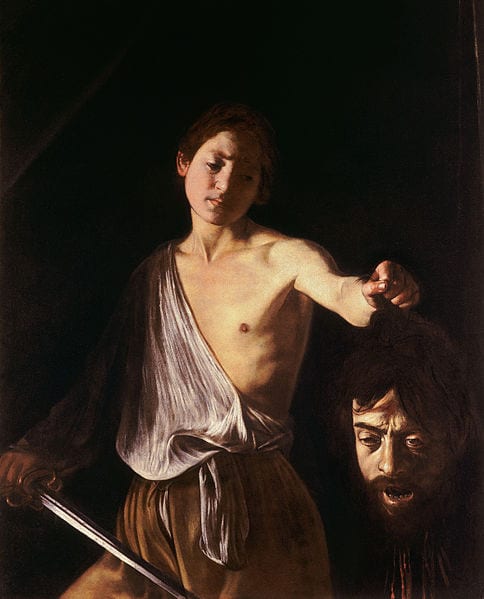 Caravaggio’s Crazy Life: The Paintings of a Killer

In our previous post on scofflaw and artist Caravaggio (born Michelangelo Merisi), we told the story of his turbulent life up to the point when he’d committed an unforgivable crime: murder.

Caravaggio wasn’t new to legal trouble, and his powerful patrons had protected him before. But this time, it was a little trickier. Unwilling to be tried in court, the 35-year-old, instead, fled Rome.

But he desperately wanted a pardon. That might be the reason behind his painting “Saint Jerome,” currently in the Borghese Gallery in Rome, which some scholars believe was executed shortly after his crime in 1606. We know, after all, that Caravaggio sent the painting to his latest and most powerful patron, Cardinal Scipione Borghese. And we know that, more than just a depiction of a saint, it’s a depiction of a saint known for some carousing in his early days—who eventually, of course, saw the light.

Perhaps Caravaggio was trying to make a parallel here to show that he, too, could turn things around. Another hint: Although Jerome was often shown with a bit of red, here he’s swamped in (and seemingly protected by) it. And red? That’s a cardinal’s color.

If the painting was a request for a pardon, though, the pardon wasn’t forthcoming. At least not yet. And so Caravaggio headed south to Naples. During his 7-month stay, the artist worked on several commissions, including the “Seven Works of Mercy,” a painting commissioned by—and still housed in—the Church of Pio Monte della Misericordia in Naples. The subject, of the works of mercy toward others that believers were expected to enact, might have had some personal meaning for Caravaggio. Even though his patrons hadn’t been able to protect him immediately after the murder, after all, he still hoped for a pardon… but in the meantime, he knew, he had to wait it out. 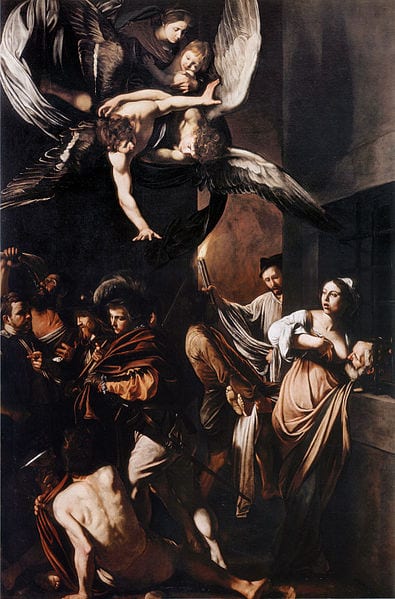 But for unclear reasons, Caravaggio quickly left for Malta. It seemed as though he hoped that the Knights of Malta would be able to help him where his other patrons hadn’t—with that pesky pardon he so needed to return to Rome and his many commissions.

Things seemed to work out in his favor, at least at first: The Grand Master of the Knights of Malta, a huge fan of Caravaggio’s work, immediately made him a knight in the Order. Again, Caravaggio became the most famous artist in town, winning one commission after another. His painting at left, “Portrait of a Maltese Knight,” currently in the Palazzo Pitti in Florence, was just one of several portraits he did of leading Knights of Malta. Things were looking up. 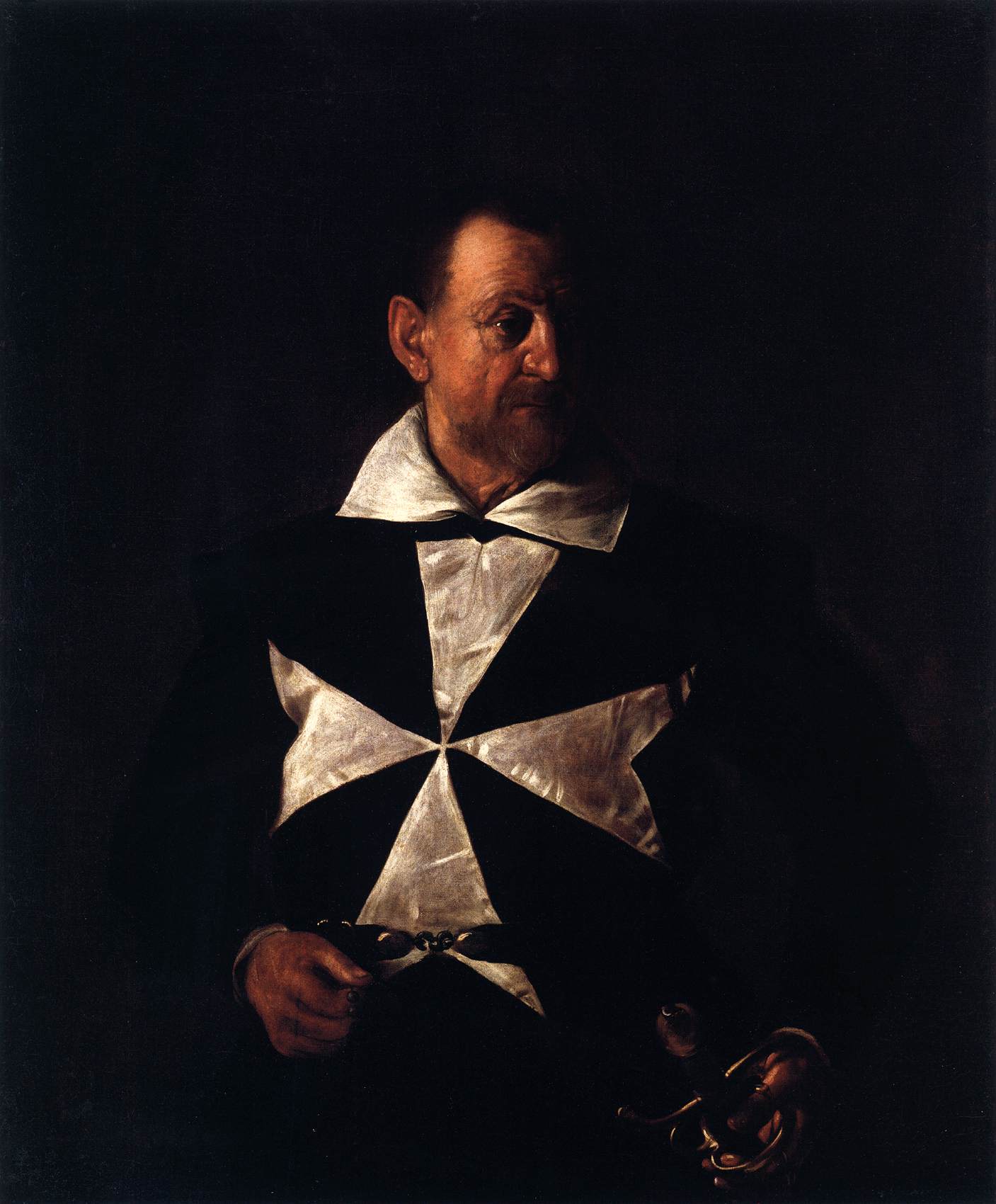 Caravaggio’s “Portrait of a Maltese Knight,” in Florence’s Palazzo Pitti

And then, after less than two years, Caravaggio was arrested and imprisoned in Malta… likely, once again, because of a serious brawl—one that seriously wounded a knight.

Caravaggio narrowly escaped imprisonment. Cast out from the Order of the Knights of Malta, he found himself on the road once again.

He headed to Sicily, where he looked up his old friend, Mario Minniti—the boy model from so many of Caravaggio’s somewhat-erotic paintings. He won commissions across the peninsula; his style seemed increasingly anxious and depressed, showing pathetic-looking figures surrounded by shadow and darkness—as in his painting “The Burial of Saint Lucy,” which hangs in the Church of Santa Lucia alla Badi in Syracuse, Sicily. 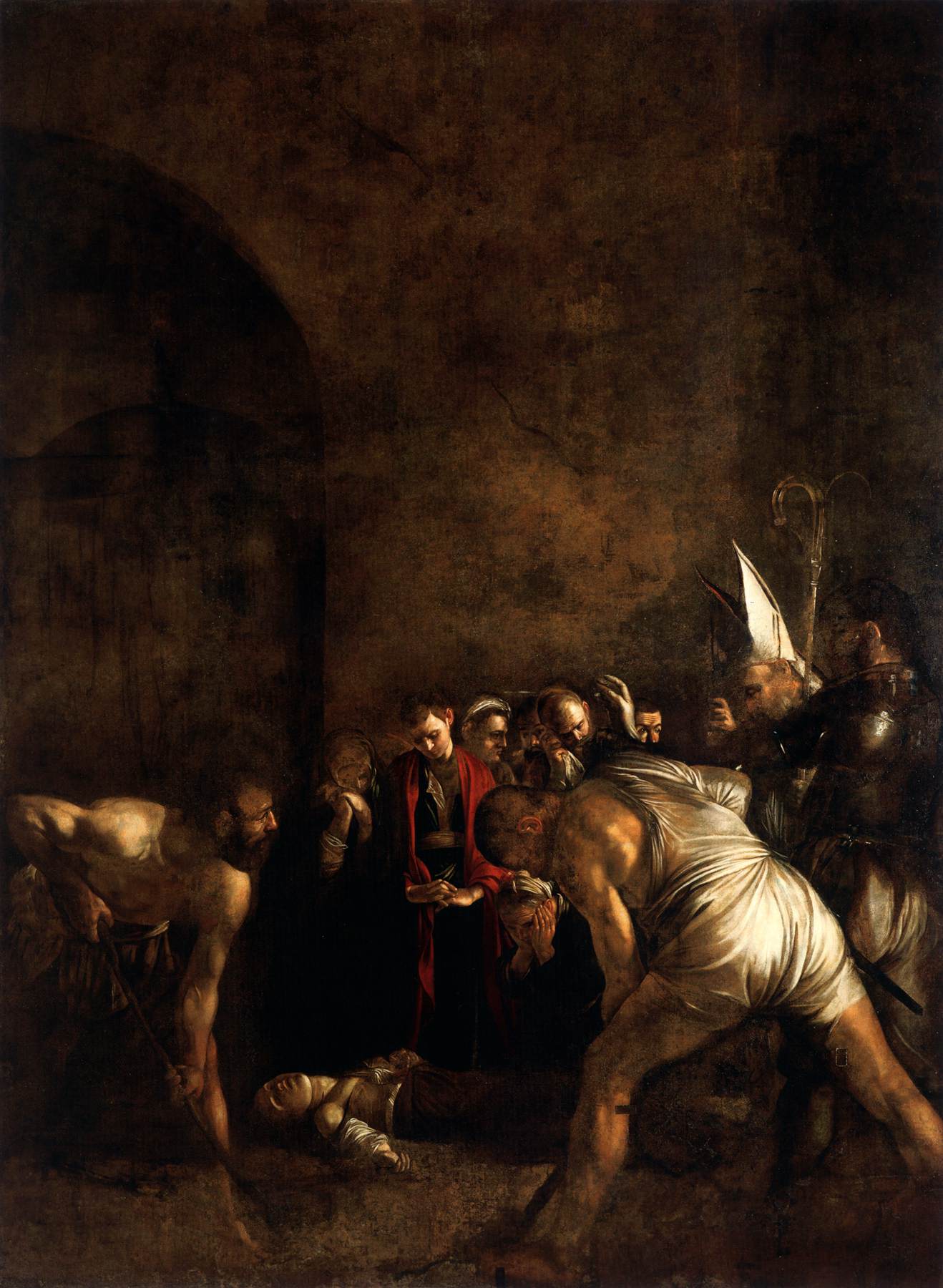 That style was hardly surprising.  Still without a pardon from Rome, Caravaggio was becoming increasingly desperate. According to contemporary reports, he was acting erratically and with paranoia, even sleeping fully clothed and armed, ready to pounce on an attacker at a moment’s notice.

And he might have had reason. According to his first biographer, he had enemies on his heels. So Caravaggio headed back across the sea to Naples, turning himself over to the protection of his patrons the Colonnas, while he continued to hope for a pardon.

Caravaggio’s “David with the Head of Goliath,” in Rome

On his second stint in Naples, he continued to paint. This may have been when he produced one of his most striking works, “David with the Head of Goliath,” which is in the Borghese Gallery in Rome. The eerie painting provides a disturbing look into Caravaggio’s psyche: Instead of showing the young hero holding up Goliath’s head triumphantly, as per usual in depictions of the time, he looks unsure, even revolted, by the crime he has committed.

Not only that, but Caravaggio put his own self-portrait… on the face not of David, but of Goliath.

Even in Naples, though, Caravaggio wasn’t safe. Four armed men attacked him outside of a restaurant, seriously wounding him. But after recovering, he took on another commission: “The Martyrdom of Saint Ursula,” located in the Palazzo Zevallos Stigliano in Naples. Done with quick, visible brushstrokes, the painting is almost impressionistic—and the image, which depicts the precise moment when Ursula is wounded with an arrow, couldn’t be more dramatic. Caravaggio’s style was still clearly evolving.

But it wouldn’t evolve any more. In July, he left Naples for Rome, having heard that the Pope had, finally, pardoned him.

On his journey by boat to Rome, Caravaggio died. How is unclear. Rumors had it that he was murdered. More likely, he fell ill and died in Porto Ercole, a Tuscan seaside town. It’s still unknown where he was buried, or what, exactly, caused his death.

But his work—and the story of this fiery, deeply disturbed, and extraordinarily talented artist—would live on.

If you find the stories behind the art as fascinating as we do, check out our fascinating Borghese Gallery experience, which includes a look at many of Caravaggio’s most important paintings.

2 responses to “Caravaggio’s Crazy Life: The Paintings of a Killer”