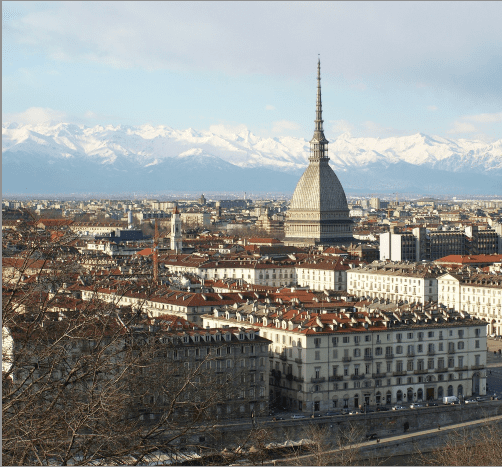 Beautiful Torino, Italy, with a view of Mole

Torino, Italy—known to English-speakers as “Turin—is one of the country’s largest cities. Between Torino’s size, and the number of attractions it offers, it’s surprising that it remains so off-the-beaten-path for tourists!

Boasting chic piazzas, Baroque architecture, palaces, and castles, the capital of the Piedmont region is so elegant, it’s been nicknamed Italy’s “little Paris.” In fact, the Savoia family, the last monarchy to rule Italy before it became a republic, resided in Torino for centuries. (And when the Republic was founded, Torino, not Rome, was its first capital). In later years, Torino distinguished itself as an important hub of Italian business; Fiat, the Italian car manufacturer, was founded in Torino in 1899 and is still a major industrial protagonist in the city.

Curious about what to see as a visitor in Torino? Here are some of our favorite attractions!

Museums and palaces in Torino, Italy Strange, but true: Torino is the home of the world’s tallest museum. That’s because of the Mole Antonelliana, the large tower that’s become the symbol of the city. Originally built as a synagogue, the landmark now houses the Museo Nazionale del Cinema (National Cinema Museum), which traces the history of international cinema. Take the elevator to the top floor for breathtaking panoramas… but beware of the local legend, which holds that students who head to the top to enjoy the view won’t graduate from their courses!

Want to get a taste of the luxurious life of royalty? Look no further than Piazza Castello, where you’ll find the opulent Palazzo Reale (Royal Palace) and the Palazzo Madama, a beautiful art museum and former home to both queens and to the first senate of the Italian kingdom. View of the Po River from Turin’s Parco del Valentino

One of the best ways to explore Torino is by bike, heading down the wide streets (many bike- or pedestrian-only) and to the city’s magnificent parks.

Parco del Valentino is one wonderful place to spend an afternoon; relax along the Po River, overlooking a castle and medieval village! We also recommend the Giardini Reali (Royal Gardens)—designed by the same architect who created the gardens at Versailles—and the hilltop gardens along the Superga Basilica, which have splendid views of the city.

Eating and drinking in Torino If castles, museums and parks weren’t enough, Torino’s also chock-full of gourmet experiences. Many of Turin’s shops and restaurants are influenced by the Slow Food movement (which started in the region), offering fresh produce and products by local vendors. The original Eataly (a gourmet market that’s now also in Rome, Bologna, and New York City) is also here.

Look for local Torino specialties like gianduja (chocolate made with hazelnut paste) and grissini (thin, crispy breadsticks). And don’t miss aperitivo, a big part of any evening in Turin; we suggest heading to the Quadrilatero Romano for a pre-dinner drink. (Here’s what to know about aperitivo in Italy!).

The famous Shroud of Turin The mysterious Shroud of Torino—the cloth Jesus was believed to be buried in, bearing the image of his face and body—attracts many visitors to the city. Check it out in the Duomo di San Giovanni, the main cathedral of Torino. (Note that the shroud on display in the church is a copy of the relic; the delicate original is rarely put on display!). For sports-lovers, Torino has a lot to offer! Torino hosted the 2006 Winter Olympics, and its renovated stadium and colorful Olympic Village, now used for apartments and offices, are historic landmarks. The city is also home to the world-renowned Juventus Football Club, with its ultramodern stadium located just outside the city center.

Have you ever been to Torino? What did you think? Let us know in the comments!