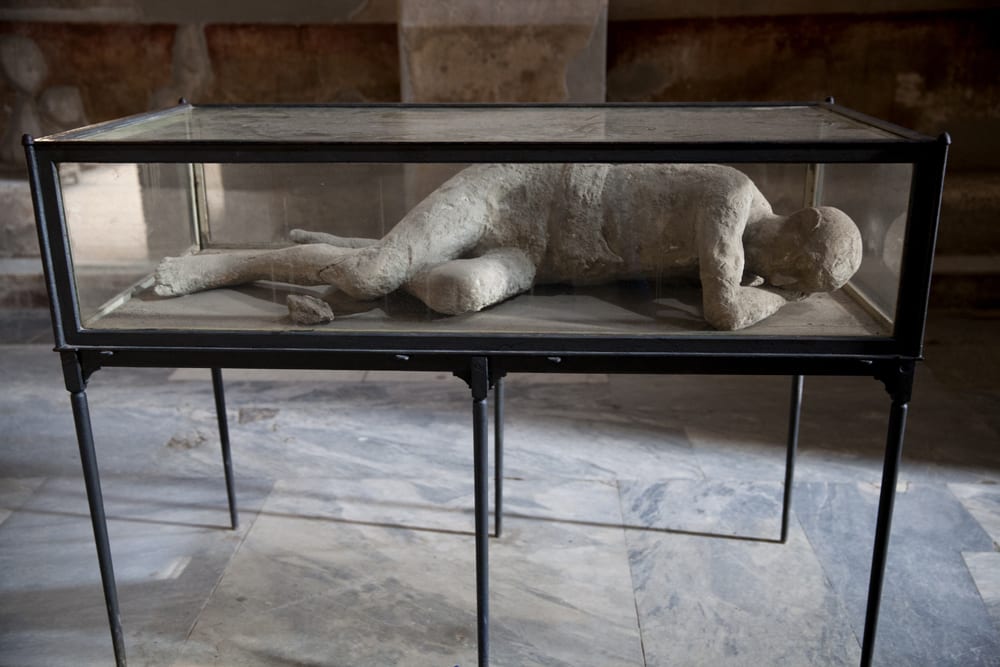 Once a bustling, blue collar port town, Pompeii’s fate was sealed with the eruption of Mount Vesuvius in 7.9 A.D. Today, Pompeii is a UNESCO World Heritage site, one of the most visited sites in Italy and one of the most visited archaeological sites in all the world. The best possible way to see what life in ancient Rome was like, plan ahead with our easy guide to get the most out of your visit to Pompeii.

How to Get There 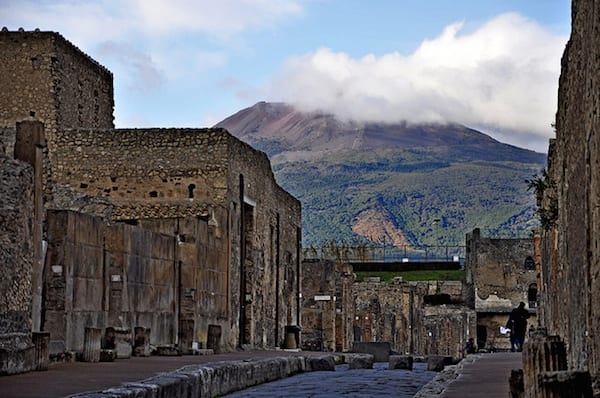 Pompeii is a major stop and easy to reach from the major surrounding cities by train, car or even bus. Travel time by road (without traffic – which is rare on these roads) is around 2.5 hours from Rome to Pompeii, 30 mins from Naples to Pompeii, 45 minutes from Sorrento to Pompeii and 4.5 hours from Florence to  Pompeii (which pretty much rules it out as a day trip from Florence).

If you’re planning on visiting Pompeii from Rome, perhaps the easiest option, is to book our Pompeii & Amalfi Day Trip from Rome, which includes a guided tour of Pompeii, a scenic drive along the Amalfi Coast and a stop in Positano. Independent travelers can book a transfer service, which is certainly the fastest option, although not the cheapest. The budget conscious will want to travel by train, which is largely easy to navigate and less expensive, although more time-consuming.

From Rome, take the train to Naples at the Napoli Centrale Station. The high-speed train, either Frecciarossa or Italo, takes about an hour and ten minutes each way. You can view train times and prices as well as book your tickets in advance on www.trenitalia.com. From Napoli Centrale, take the Circumvesuviana train, the old but reliable commuter train of Campania, on the Napoli-Sorrento Circumvesuviana line. The Circumvesuviana runs trains about every half hour and it takes about 30 minutes to arrive at your Pompeii stop, Pompeii Scavi – Villa dei Misteri.

If you’d like to get a better view of the Almafi Coast (albeit a rocky, potentially crowded, view) take the SITA bus from Piazza Esedra in Naples or from the Sorrento train station. One or two busses run per hour and stop at all the major towns along the coast, including Pompei (the modern day town, as opposed to Pompeii the archaeological site). A ticket costs 2.80 euro and the trip takes about 40 minutes. Check out the SITA website for more information and bus time tables (in Italian).

Read More: An Art Lover’s Guide to Pompeii – A City Frozen in Time

Unfortunately, the same attention is not lavished on visitor facilities. The site has only one restaurant-cum-cafeteria of dubious quality, and the maps – if you can get one from the information booth – are not up to date (you may have to backtrack where streets have been blocked off).

Remember, Pompeii was once an entire maritime city, and the current site is vast! Forty-four hectares that have been excavated, but not all are accessible. Unfortunately, the beautiful site isn’t managed so well. There are often areas cordoned off with little explanation and rather poor signage. Your itinerary will be well-planned if you visit Pompeii with a tour guide, so you won’t need to worry as much. If not, plan ahead and come prepared to ensure you have a successful trip.

You can go back in time by walking through the preserved streets of the city – by far the best way to view Pompeii. Though you could spend an entire day touring the site, the average time needed once inside is about two to three hours. Like most Roman-built cities, Pompeii is well organized with a clear street plan, but the modern-day signposts are often wrong. Though technically the information booth should have maps, you’ll have to specifically ask for one and hope that it’s been updated. Better to come ahead with a current map. Touring Pompeii is not difficult, but in order not to waste time or bake unnecessarily under the Neapolitan sun, those traveling solo might want to consider bringing a guidebook as well. A 1912 Map of Pompeii shows the sites enormous proportions. Photo by Dennis Jarvis

Bring hats and sunscreen no matter what season and you may even want umbrellas in the summer. There is very little shelter from the sun and two to three hours outside will leave you feeling more like the ashen city than your healthy self. You’ll also want snacks and plenty of water for all that walking. Inside there is only one small convenience stand with slim offerings and unreliable hours of operation, but there are water fountains throughout the site that you can use to refill your water bottles.

The fee to enter Pompeii is 11 euro, about 13 US dollars currently, but be sure you have cash: The ticket office doesn’t accept credit cards. You can get more information, view prices or book ahead here.

Before Vesuvius’ eruption in 79 AD, Pompeii was an important port town for the ancient Roman empire, which controlled the entire Mediterranean Sea. Middle class, Pompeii was a classic port town filled with sailor’s hotels, bars, public baths, taverns and brothels. The archeological site and ongoing excavations give visitors to the formerly bustling Pompeii the best look there is on ancient Roman life. Go to see the Roman Forum; the theatre, whose acoustics are so good you don’t need microphones to be heard from the stage; the public baths with looming columns. Built in 70 A.D., the Anfiteatro is the oldest-known Roman amphitheatre in existence. Now covered in grass, it originally held up to 20,000 spectators.

Archaeologists found indentations in the ground that they were able to fill with plaster molds to exactly match what was originally there. Photo by Carlo Mirante

The Forum, or Foro in Italian,  and served as ancient Pompeii’s main piazza and leads to many other notable sights, such as the Basilica built in the second century BC, the Temple of Jupiter (Tempio di Giove) which only has one triumphal arch remaining, the city’s Forum Granary and a the nearby macellum, the city’s primary meat and fish market.

You can also tour bakeries, small family restaurants, ancient roman homes and even a local brothel, where you can find “Umberto was here” style graffiti on the walls and lively life-sized frescos that served as a sort of ancient-day advertisements. On the other end of the social class spectrum is the House of the Vetti, the home of a wealthy merchant and one of the best preserved homes. Though recently closed for renovations, if it’s open you can view the typical villa of ancient Pompeii’s richest citizens, including extravagant rooms covered in frescoes and an inner courtyard with small fish ponds.

Many of the artifacts from Pompeii are housed in the National Museum of Archaeology since they were directly ordered to Naples in the 1700s by the Neapolitan king. History and archaeology buffs should absolutely visit the museum – it offers the best look into the art of Pompeii that still exists, which ranges from enormous statues and mosaics to intimate objects of every day life. Pompeii archaeological site has all of the ruins but the Naples Archaeological Museum houses all of the objects found during excavations.

Read More: Why You Shouldn’t Go to Pompeii without Visiting Mount Vesuvius What remains of the second century Basilica. Photo by Dennis Jarvis

Before you end your visit to Pompeii, take a last look at the impressive view of Mount Vesuvius in the distance. 2,000 years ago the still-active volcano erupted a cloud of gas, ash and rocks. For hours it spewed, causing most of the residents to flee. It took just one moment for the eruption to change and an avalanche of lava and rock to race down the mountainside toward Pompeii. Though Vesuvius destroyed the city, it also effectively preserved it, stopping life in Pompeii in its track and providing us with most everything we know about the ancient town.

17 responses to “A Guide to Visiting Pompeii”

Ready why a visit to Mount Vesuvius is the best way to top off any trip to...

One of the most famous Ancient Roman cities, Pompeii has become synonymous with history, as well as...

Here's why you shouldn't miss Naples, that crazy city south of...

Even if you only have 45 minutes between trains, you can still taste the best food in...