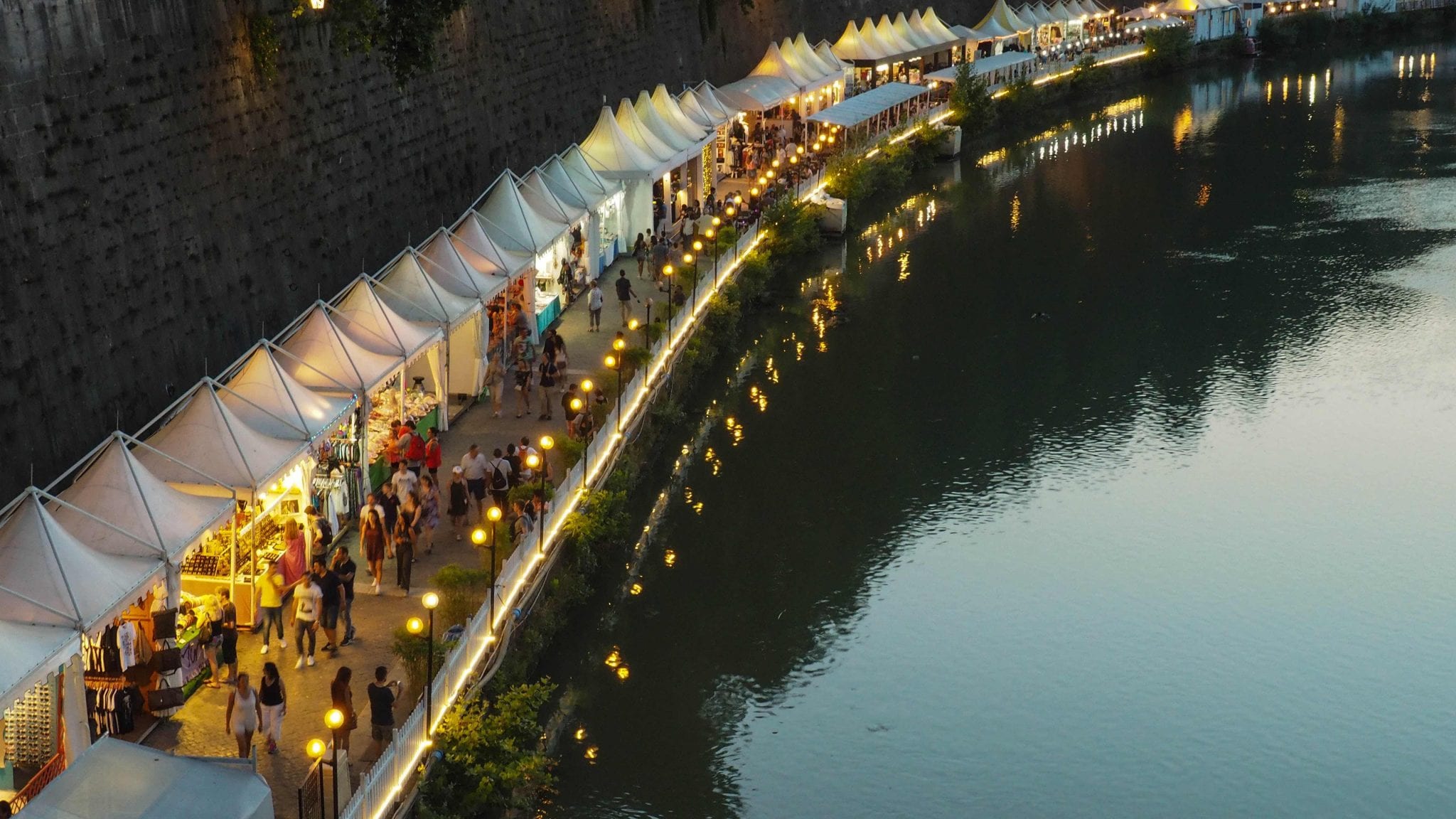 At Walks of Italy, we know the Italian capital inside out. And while we’re all about fully embracing being a tourist with our award-winning walking tours, we love to take a look at the city from a local’s perspective too!

When it comes to fully embracing a city by adapting its local customs and culture, the phrase ‘When in Rome!’ is usually declared. In fact, the phrase is so well known that it’s usually used even without its context-forming latter half: ‘…do as the Romans do!’

So, when in Rome… how does one do as the Romans do?

While it would be a shame to forgo a visit to the Vatican City on your first trip to the capital, or to avoid the Pantheon and the Colosseum and Palatine Hill, and while you should definitely be treating yourself to gelato in Giolitti every time to you find yourself in the city (!) – what do you do once you’ve taken in the main highlights?

Rome’s lesser-visited attractions – As the Romans do!

If you find yourself with extra time in the city, or just in need of a break from the sheer scale of the sometimes overwhelming history of the area, it may be time to look for some of the hidden gems, local experiences and lesser-visited landmarks on offer. From tourist-friendly yoga to a rooftop pasta-making class, and fried artichokes to Pixar exhibitions, there are some amazing, alternative things to do in Rome for those looking for the more subtle side of the city.

Here are some of our suggestions:

One of life’s great pleasures is discovering a foodstuff you never knew you loved, and this is exactly what happens to most foodies on a trip to Rome’s Jewish Ghetto. Part crispy, part creamy fried artichoke is on the menu at almost every restaurant, and for good reason; Carciofi alla giudìa (Italian for ‘Jewish style artichoke’) originated in the Jewish Ghetto in Rome, and it’s there that it has been perfected.

Try it out at the Nonna Betta, one of the charming kosher restaurants lining the cobbled stoned Via del Portico d’Ottavia, and a special stop on this fantastic Rome food tour.

Bonus tip! If time permits, take a trip to the Jewish Quarter in the day time and discover the history of the area, its culture and people in the Jewish Museum, located beneath the impressive synagogue.

2. Take a midday stroll through Trastevere

Trastevere is one of Rome’s most colorful neighborhoods. While it may be less touristy when compared to the ancient town or Vatican City, it has to be said that it does remain firmly on the tourist trail – but that’s not to say it’s not worth a visit!

Known for its laid back, bohemian vibes, shady side streets, great restaurants and artisan shops, Trastevere offers tourists a welcome breather from the hustle and bustle of the city center. Budget-friendly trattorias and backpacker hostels are standard here, with mostly a younger crowd gravitating to the area. Riverside movies take place over summer (see below!), while the delightful Sacher Cinema offers a permanent residence for arthouse movie enthusiasts. On Sundays fill your bags with bargain-basement clothes and trinkets from the Porta Portese market before visiting da Enza al 29 to fill up on fresh pasta and tiramisu.

Palazzo Colonna is one of the oldest and largest private palaces in Rome. Home to the Colonna family (whose impressive 31-generation history is well worth delving into itself), the 14th Century palace is a sprawling stately residence filled with grand marble staircases, colorful salons, impressive hallways and a beautiful open courtyard at its center.

While the palace remains a private home for the Colonnas, it opens its doors to the public on Saturday mornings. Tickets are 12 euro and include a guided tour at specific times. Special guided tours of other restricted areas of the palace are also available for an additional cost and weekday tours are by appointment only.

4. Run the trails at the Villa Doria Pamphili

While tourists and locals alike flock to the Borghese Park in search of open green space in the city, the lesser-visited Villa Pamphili on the east side of the River Tiber is the perfect alternative when the Borghese gets too busy. On weekends, take a break from pizza and pasta and grab a healthy brunch at Vivi Bistrot in the heart of the park, then take a stroll to the nearby Belvedere Lake. At lunchtime, Romans like to picnic just outside the private Villino Algardi, also known as Casino del Bel Respiro.

Pamphili is well known to local joggers for its natural trails, while its perimeter adds up to just about 10km – the perfect distance for a Saturday morning stretch. There are bathrooms and water fountains at the entrance too, while a run to and from the park takes in some of the city’s impressive landmarks, should you wish to do some sightseeing pre and post-run!

5. Bag a designer bargain at a local vintage market

While the Port a Portese Market in Trastevere bustles with bargain hunters digging through 1 euro souvenir trinket stands and haggling over a packet of plastic forks, the more subtle Mercato della Città Ecosolidale offers a relaxed take on Saturday browsing.

Located in the Piramide in Rome, via del Porto Fluviale, the eco-friendly market sells all sorts from furniture and toys to clothes and jewelry, often with some stunning vintage style dresses and accessories on offer for a bargain.

The market runs on Tuesday, Thursday, Saturday and Sundays and times vary. Be sure to visit their Facebook page for details.

6. Catch a movie on Tiber Island

From mid-June to September a charming outdoor cinema pops up on the Isola Taberina showing both international and Italian films. The L’Isola del Cinema attracts both locals and tourists alike, who make a movie showing the focal point of a night spent browsing the craft stands and food stalls of the nearby riverside summer market.

As evenings go, you could do worse than a stroll through Rome and an outdoor movie on the river! Visit the Isola del Cinema on Facebook for more.

7. Learn how to make pasta like a pro at an Italian cooking class

Full disclosure, we may be tooting our own horns with this one, but here at Walks of Italy everyone agrees that learning how to make pasta with a local chef – plus enjoying a full homemade meal on the chef’s rooftop after – is an amazing way to spend an evening (or lunchtime!) in Rome.

Cooking classes may not sound like they’re for everyone, but more times than not, couples, solo travelers, families and especially children find themselves sometimes unexpectedly calling it a highlight of their vacation!

8. Have dinner surrounded by art at Cafe Canova Tadolini

Caffe Canova Tadolini is an artist atelier, museum, cafe bar and restaurant located near the Spanish Steps on Via del Babuino. The multi-functional, historical setting has become an attraction in itself, with sculptures and casts from 19th Century artists spilling out onto the street from the studio within, and enticing more curious travelers inside. Once inside, visitors rave about the cafe-cum-museum not only for the unique photo ops the bizarre setting allows for, but for the delicious food, good coffee and casual, welcoming atmosphere.

9. Find your zen at an English-speaking yoga class

If you’re feeling toured out and in search of some serious breathing space, a drop-in yoga class may be just what you need. Happily there are plenty of English-language-friendly yoga classes dotted around Rome – some even offering special tourist packages too!

Zem Yoga near Piazza Navona on the Corso Vittorio Emanuele II, specialises in heated and non-heated vinyasa and hatha yoga. Drop in rates are from 13 euro (standard 19 euro) while they also offer a five-class tourist pass for 95 euro, which includes a yoga mat, towel and shower towel.

There are several other English speaking classes around the city, however if yoga, barre or pilates is your thing, you’ll have no problem following the excellent instructors at Yoga Rome (‘RYOGA’), which has studios in several neighborhoods in Rome.

10. Drop by an exhibition at Palazzo delle Esposizioni

If you find yourself craving a more modern exhibition in Rome, you’ll likely find what you’re looking for in the innovative Palazzo delle Esposizioni in Via Nazionale 194.

The Palazzo has hosted all sorts of cultural icons, from Rothko to Pixar, and offers interactive learning opportunities for all the family with many of its immersive events.

The Palazzo delle Esposizioni recently underwent a full refurbishment, and is now an ultra-modern ‘space for culture and ideas at an international level‘. The peaceful, quiet, open air space makes the Palazzo a perfect break from the hot Italian sun, busy tourist spots. The Palazzo also contains a 136 seat cinema, cafe, bookshop and restaurant. For more information and tickets visit pzzoesposizioni.it

11. Enjoy a mid-summer concert under the stars at the Caracalla Baths

The spectacular Caracalla Baths – ruins of a vast Roman bath complex – play host to a variety of special live concerts, gigs, operas and plays throughout summer, and if you manage to catch one while you’re in the area – you’re in for a real treat!

The atmospheric baths has been the backdrop for iconic events such as the first Three Tenors concert, a series of ‘farewell’ concerts by celebrated composer Ennio Morricone in 2019, plus numerous ballets and operas from the Rome Opera Company. When planning your trip to Rome, it’s well worth checking out a general Rome calendar of events to see if you can nab a ticket to any of the popular concerts and shows.

If you’re familiar with Italian culture, you’ll know how much the Romans enjoy their aperitivo or aperitif (and if you’re unfamiliar with the concept, this informative piece should clear it up nicely!)

One place that boasts some of the best views in the city for said evening drinks is the Eitch Borromini, located on Via di Santa Maria dell’Anima. The sixth floor rooftop, nicknamed La Grande Bellezza, plays host to some of Rome’s more affluent residents, who gravitate to the terrace to spend a relaxing evening of cocktails and chat as the sun sets over the Piazza Navona, Pantheon, St. Peter’s Basilica and the Palace of Justice beyond.

The views don’t come cheap (ask for the wine list!) so keep this one for a special treat night.

The rooftop bar is strictly reservations only. Call ahead to book.

Read more: Where to stay in Rome