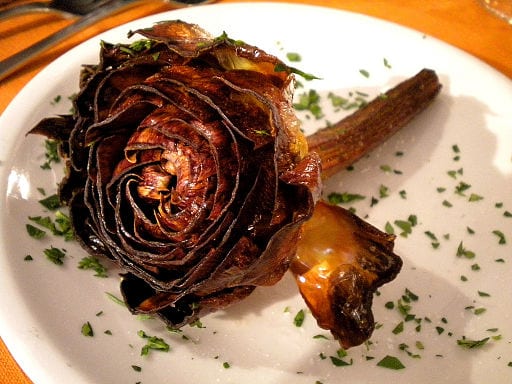 At Walks of Italy we love Italian cuisine in all its forms and we want to share it with you. If you’re interested in learning more about Jewish culture in Italy, take a look at our Rome as a Local Tour that takes you on a in-depth stroll of the Jewish Ghetto. For our other tours and experiences check out our tour page at walksofitaly.com.

The Jewish Ghetto, Rome is one of our favorite neighborhoods in Italy. Although it was created to keep the Jewish community confined, it ended up fostering a culture that has had an outsized effect on the entire city, especially with regards to food. Today food that originated in the old Ghetto sits atop every list of what to eat in Rome.

Jewish culture has had an outsized influence on Italian cuisine since at least the Renaissance when Jewish recipes for geese – a favorite protein of Jews in the Po Valley for centuries – infiltrated the papal  kitchens of the famous chef, Bartolomeo Scappi. Jewish cuisine is also venerated, slightly backhandedly, by in the 1939 edition of Italy’s most famous modern cookbook, Science in the Kitchen, by Pellegrino Artusi. Perhaps the most poignant incarnation of Jewish recipes is in another classic cookbook – Eating Italian, by the Jewish-Italian author Fernanda Momigliano – who penned her era-defining work in 1936, on the eve of large-scale antisemitic persecution in Italy and the rest of Europe. Although members of her family were murdered in the concentration camps and Momigliano only just escaped internment herself, her cookbook enshrined Jewish cooking indelibly in la cucina italiana.

Like New York and its bagels, Rome has adopted many jewish foods so whole-heartedly that they are no longer thought of as Jewish Italian Food, they are just Roman foods. Ground zero for these treats are the old Ghetto, which sits hiding in plain sight in the heart of the city. As one of the culinary gems of Rome, hip Romans and savvy tourists alike go there for lunch or dinner. Because of its long history and beautifully-preserved streets it’s also considered one of the most authentically Roman places in the entire city. If you want to go, be sure to check out our Visitors’ Guide to the Jewish Ghetto.

The most notable Jewish Roman dishes originate from the years of the Ghetto’s curfew, between the 1500s and 1800s, when the three gates of the district were locked after sunset by law. They utilize what were then thought of as humble ingredients like artichokes, codfish and zucchini. Dried beef replaces pancetta and offal is roasted before cooking to remove any trace of blood.

The name of the game was cucina povera, literally, “poor cuisine”. With little money and even fewer freedoms, Rome’s Jewish population made do with the scrap cuts of meat. They also began frying food to add more taste. Mozzarella, zucchini, little finger fish from the river – they fried it all. Another great culture of cucina povera originated in Tuscany – read our blog on the origins of Tuscan cuisine to find out about more delicious regional specialties.

The quality of the food, along with the Ghetto’s cultural isolation helped most of these dishes survive the test of time while being updated, adapted or improved for the modern palate. If you eat in Rome’s Jewish Ghetto today you’ll still find the classics, as well as a distinct Mediterranean influence with hummus, couscous and falafel. Whatever the option, the food is kosher, hearty and based on long culinary traditions. Oh yea, it’s also some of the best food in Rome. 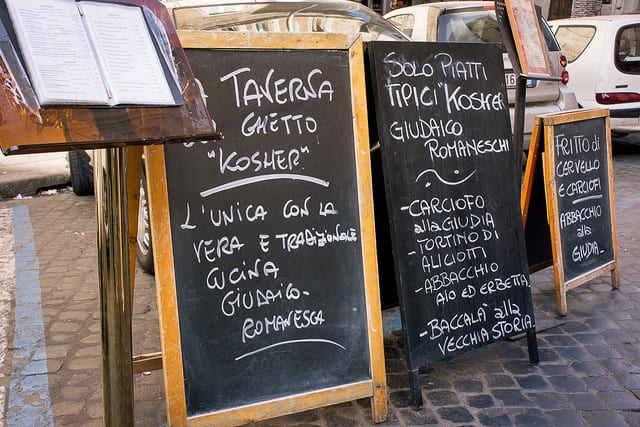 This place seems to have it all! Photo by April (flickr)

Not sure what to eat? Start with some of our favorites from Rome’s Jewish neighborhood:

“Guidia” is the word for “Jew” in the Roman dialect of Italian. “Jewish-style” artichokes  are a spring delicacy that are first tenderized until they open up and then deep-fried. Simple, yet delicious, they are perhaps the best known dish to come from the ghetto and one of the most characteristic things to eat in Rome. Don’t expect to eat them whenever you want, though; their season is vanishingly brief, gracing the menus of most of Rome’s best restaurants starting in February and lasting only through April. You can get them out of season but we don’t recommend it, as eating seasonally is one of the main joys of any Italian vacation. For more advice one what to eat when, check out on blog on eating seasonally in Italy.

Concia is a unique method of preserving produce longer by frying it and marinating it in vinegar. It arrived in Rome’s Ghetto with Sephardic Jews fleeing persecution in Spain in the 15th century.  When you see concia in Rome, it’s almost always referring to Roman zucchini that’s been fried in olive oil and then marinated for hours with white wine vinegar and fresh mint leaves. It’s a simple, seasonal classic that is exploding with flavor.

Baccalá is the Italian word for cod that has been salted for preservation. Though cod doesn’t live in the Mediterranean It would have been common to see it stacked in big white sheets in many Roman markets, imported from places like the Bay of Biscay. Italians love their baccalà and they eat it in tons of different ways. The Jewish version is, you guessed it, fried. After soaking the cod for at least 24 hours to remove some of the salt, the fillets are deep fried and served as both a main dish and a simple, crunchy, mid-afternoon snack. Frying an already meaty fish produces a flavor that is intensely savory and astoundingly delicious.

You can’t go to Rome without eating supplí. It’s not just an incredibly typical Roman food, it’s one of the city’s tastiest treats and absolutely great with a beer or wine. A cousin of the Sicilian arancini, this deep fried rice ball also has its origins in Rome’s Ghetto. These roughly egg-shaped snacks are made of rice, tomato sauce, a bit of mozzarella and raw egg (to hold everything together), all rolled in bread crumbs and fried. The name is an italianization of the french word for “surprise” which refers to the savory treat they hold in the middle. In the past offal was used as a surprise but today you are most likely to find stringy molten mozzarella. When you break a good supplí in two it should resemble an old school telephone with the two ends connected by a ‘handle’ of gooey cheese, hence their longer name supplí al telefono.

Bucatini al’ Amatriciana – doses it have guanciale or salt beef? Hard to tell without taking a bite!

Amatriciana is one of Rome’s most popular pasta sauces made with pig’s cheek (guanciale), tomatoes, and Roman pecorino cheese. The Jewish version takes pig out of the mix and simply replaces it with salted beef, keeping it delicious and Kosher. Don’t think it’s a lesser version, either; some actually prefer beef, swearing by it’s deeper, more savory flavor.

Don’t be fooled by the name, Jewish Pizza is actually a dessert! Known as either pizza Ebraica or pizza Romana, this dish is actually a sweet loaf of bread filled with candied fruits, pine nuts and almonds.

Jewish bakeries are either your first or last stop to truly get a taste of the ancient Jewish foods in Italy. Perhaps the most famous is Boccione, in the heart of the ghetto. This Roman institution serves hot slices of pizza ebraica, along with a plethora of classic Jewish dessert recipes that are like little slices of history. Try the ricotta and wild cherry tart, made to an recipe that reportedly hasn’t changed at all in 2,000 years.

Have you eaten any of Rome’s Jewish cuisine? Let us know what you thought in the comments!