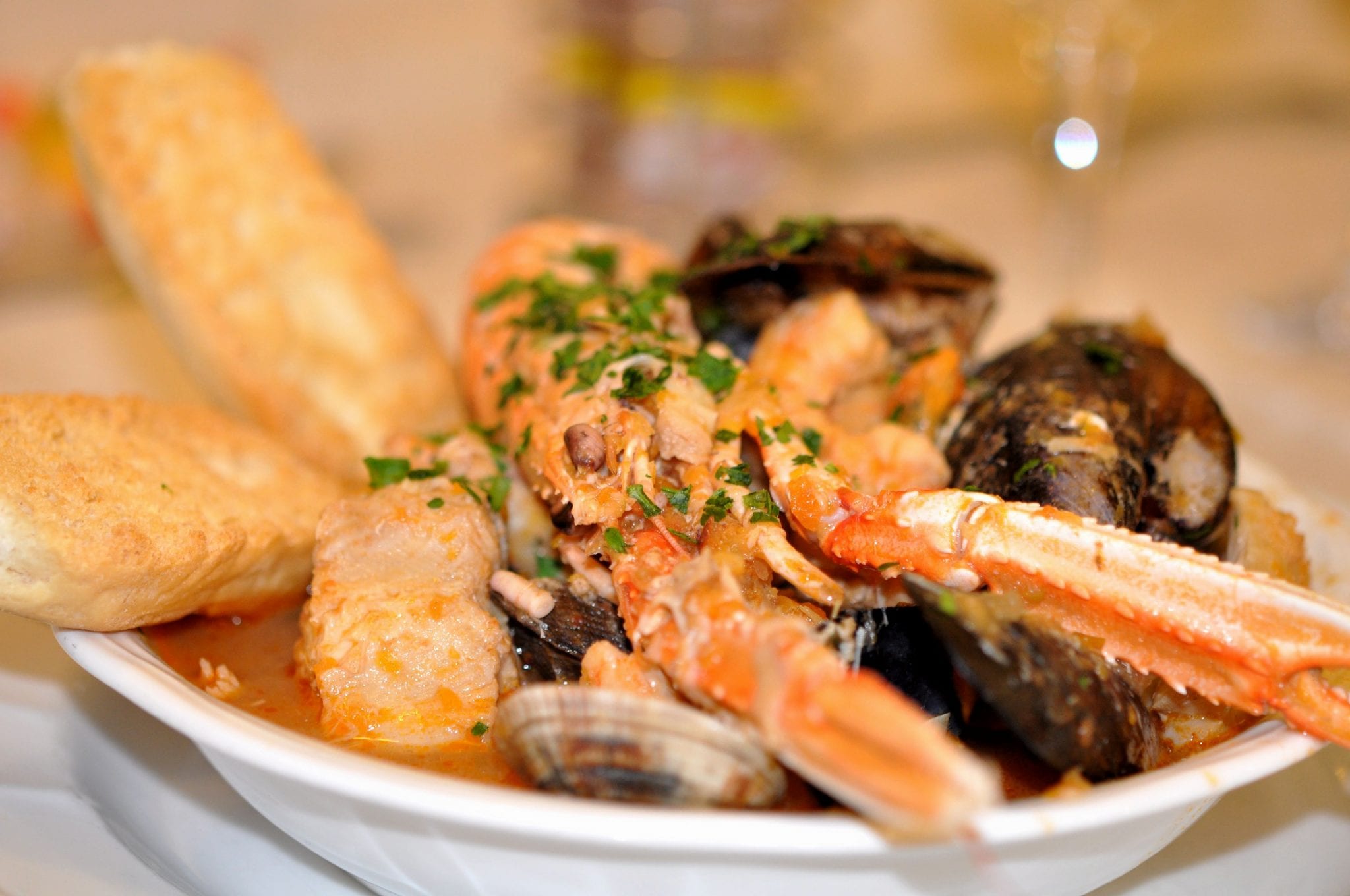 What to Eat in Venice

If you’re heading to Venice anytime soon there’s something very important you need to know: what to eat.

Veneto, the region in which Venice is located, has enormous variety in its cuisine, probably more than any other Italian region. Stretching from the sea all the way to the foothills of the Alps and the fertile plains of Emilia Romagna, this expansive and varied geography, along with the history of the Venetian Republic, have added many different layers and nuances to the food.  For instance, Verona is just a short train ride from Venice, but its hearty, meaty cuisine is worlds away from the light, local seafoods that appear on plates in la Serenissima. With good ports for importing food and large coastal plains for crops, Veneto was one of the first Italian regions to use and eat rice, corn and a vast array of spices. This eclecticism is still present today if you know where to look.

We don’t have space to take you to all the different micro-regions of Veneto, but below is a break down of the dishes you absolutely need to try to get a taste of the flavors of Venice. 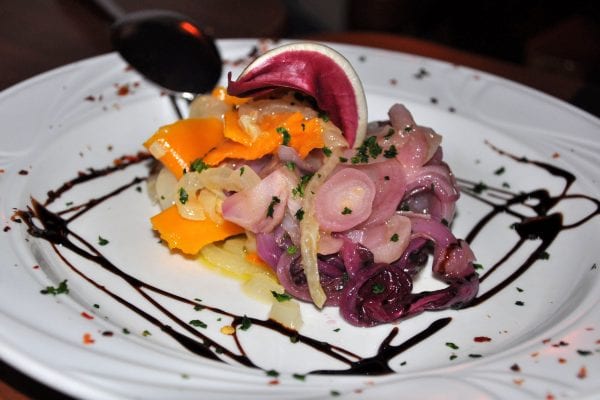 A spruced up sarde in saor

This is one of our favorite Venetian dishes, but it isn’t for everyone. It’s an antipasto that, at its most basic, features sweet-and-sour sardines with onions, pine nuts and raisins. It’s briny, salty, delicately sweet, and intensely savory – one of the more uniquely-flavored dishes in mainland Italy. The recipe apparently originated among fishermen who used vinegar (much like the Japanese when making sushi) to preserve fish that they took out onto the boats with them to eat. Although you’ll find more variation in the dish these days, it’s still bracingly simple and relies on very fresh fish and good onions. It can be too “fishy” for some, but even those who don’t love seafood should give this one a try because it is one of Venice’s most traditional and beloved dishes.

Very simple: Venetian shrimp are boiled and are served with a simple dressing of olive oil and lemon juice. The key to getting a good plate of scampi, as opposed to simply an okay plate of scampi is buying them in the right season. Fall and winter are not shrimp season in the Mediterranean and if you order a plate of them you might be getting frozen imports which won’t be anywhere near as tasty. The shrimp season starts properly in March and peaks in the late spring/early summer. After June, quality often begins to decline.

Although you might not know it from the name (which appears in the often dense Venetian dialect), this is a dish of Large, plump clams, cooked with lemon and pepper. They’re so good, people can’t resist reaching for them as soon as they’re on the table, even when they’re hot… hence “a scota deo” – hot fingers! Once again, this is a dish best ordered during clam season, which begins in May and ends in August. 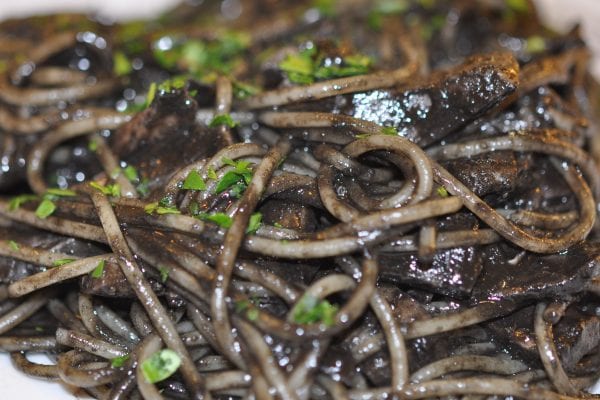 This specifically Venetian dish of rice and peas sits comfortably between a risotto and a soup. It’s so beloved that it used to be offered to the Doge – that is, the ruler of Venice – every St. Mark’s Feast Day. Veneto is one of the largest rice-producing areas of Europe and so risottos are a popular menu items. Other popular risotto dishes include risotto with shrimp (risotto con scampi), tripe with rice (riso e trippa) and rice with black calamari sauce (risotto al neri di seppi)

Here’s one that’s deceptively simple, but absolute heaven when made correctly. It’s a pasta of just three ingredients: bigoli (similar to spaghetti), onions, and anchovies. Unlike some of the other sea-food entries on this list, bigoli in salsa is not particularly fishy-tasting. When you cook anchovies they break down into a salty, savory sauce that packs an intense depth of flavor into each bite. Mix in onions that have been sauteed until they are unctuously soft and you have the holy trinity of seafood pasta. 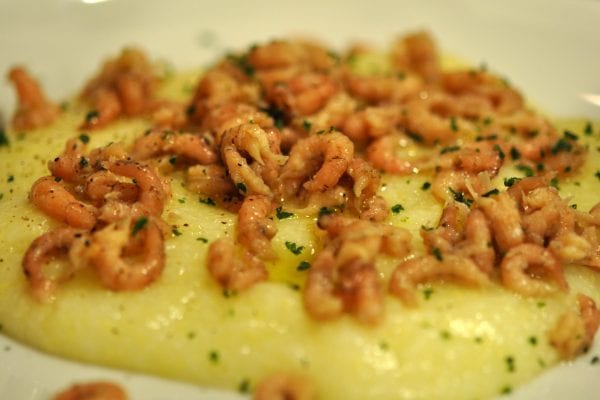 Scampetti with polenta in Venice

The farther north you go in Veneto, the more prevalent polenta becomes as a starchy staple appearing in place of pasta. However, it’s so popular that you will also find it in a lot of restaurants in Venice, as well as cicchetti bars. It’s either eaten as a mush – similar to American grits – or as fritters, which usually carry something on top. If you want it as a main course or starter, try scampetti con polenta, or little shrimps with polenta, or veal liver with onions and roasted polenta (fegato alla veneziana), both are beloved specialities of the entire region.

Remember how we said that polenta is often served in fritters? The most common topping on a polenta fritter in Venice is bacalá mantecato, which is a sort of creamed salt cod. Another seafarer’s dish, bacalá developed as a way for fishermen and sailors to preserve fish and take it with them during long voyages. However, it isn’t traditionally eaten in many parts of Italy because cod is not native to the mediterranean. So why is it a beloved staple of the Venetians? As the story goes, a Venetian trader who was stranded in Norway with some Norwegian cod fishermen first found out about the bacalá in 1432 and soon began to import it from other Atlantic seafarers, who had been eating salt cod for much longer. Since then it has become one of the most popular ingredients in Venetian cooking. Look for it served in a variety of preparations and sauces. It’s another un-fishy fish and is also delicious in deep-fried croquettes, aka polpette.

Although the term “carpaccio” is often used to refer to any thinly sliced raw meat or fish, the original dish is quite specific and refers to thinly sliced beef with a sauce made from mayo, mustard, cream and tomato. It was invented in Harry’s Bar in Venice (which also invented the cocktail, the Bellini) for the Italian contessa, Amalia Nani Mocenigo. She came to Venice in 1950 after having been advised to avoid eating cooked meats by her doctor – though it’s unclear why, or what sort of ailment she was suffering from. In any case, the legendary owner of Harry’s, Giuseppe Cipriani, invented the somewhat vampiric dish, then finding that raw beef was not the tastiest thing in the world, added the sauce. As with the Bellini, Cipriani took the name from a famous Venetian Painter, Vittore Carpaccio, who had an exhibit on in Venice at the time. 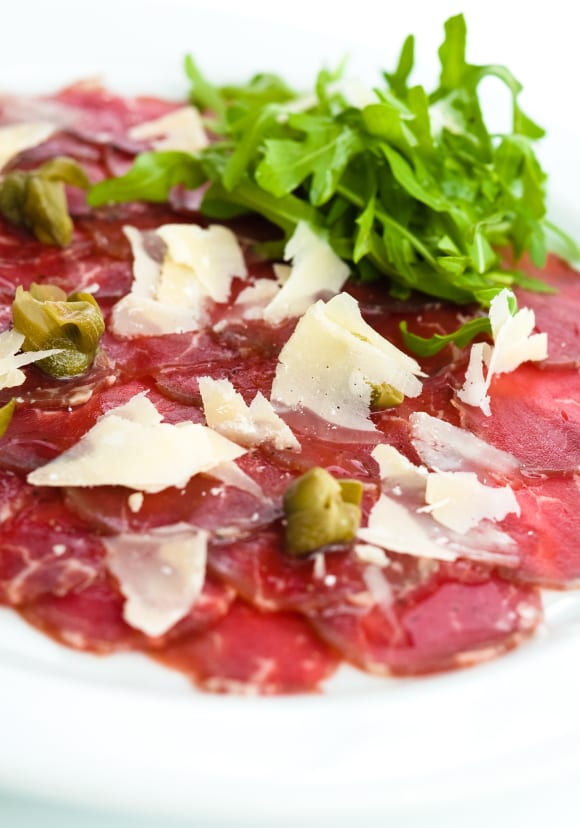 These traditional Carnevale treats are must-tries if you happen to be in Venice during the Easter season. They are fried balls of dough dusted with sugar and either studded with candied fruits or filled will all manner of creams and custards. Rich and yeasty with a browned, crackly outside and a soft pillowy inside, these little delights are a special treat that fill up bakery windows all around the lagoon when in season. They’re often tough to find throughout the rest of the year, but if you happen to be in Venice during Carnevale we highly recommend eating them at least once a day. For a special treat try one filled with zabaione, an alcoholic custard!

The Veneto region is famous for pandoro, a sweet, yeasty bread studded with candied fruits and usually eaten around Christmas, but the region boasts many more scrumptious deserts. Keep an eye out for scalete, pàndolo, and baicoli, all traditional sweets from Venice. But the queen of them all is pincia, a Venetian take on bread pudding. There are as many versions of this custardy treat as there are gondola on the canals of Venice but they all include dried fruits, eggs, milk, and some sort of starch – usually dried bread, but sometimes polenta. They also usually include a variety of spices that were originally imported into Venice from the Far East like cinnamon and nutmeg. Even if you don’t like dried fruits, this is another one that we highly recommend because it is just so traditional. Through foods like pincia you can taste not only the geographical uniqueness of Veneto, but also the rich commercial history of the Venetian maritime empire.

3 responses to “What to Eat in Venice”