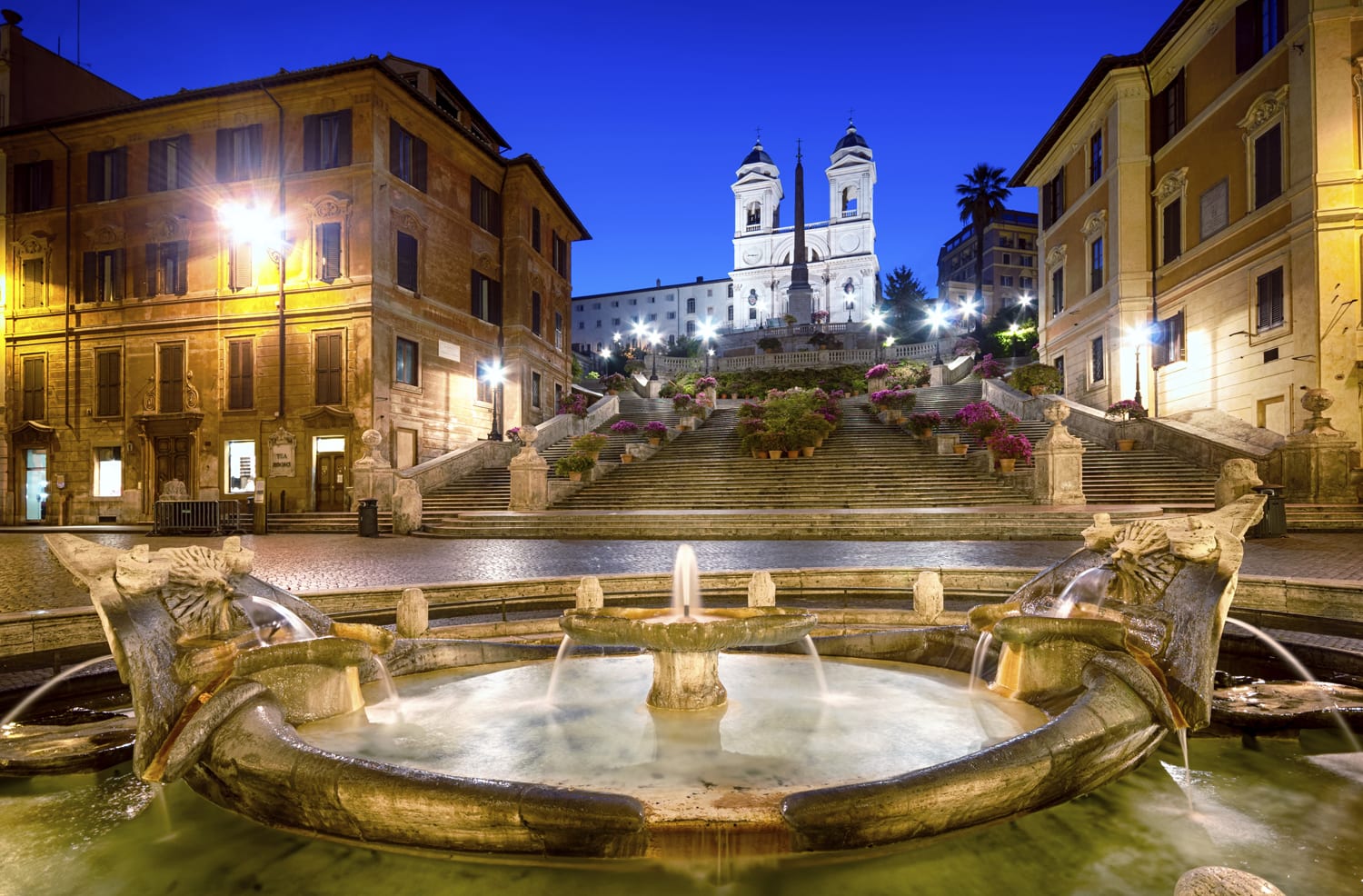 The Spanish Steps, or Scalinata di Trinità dei Monti, were designed and executed in an era when people still took a holistic view of city planning (and the Vatican still owned large swathes of Rome).

They sit on a high point that, if you follow Via dei Condotti and approach the Spanish Steps with the Tiber at your back,  the stairs seem to grow before you. Standing at their base, they dominate your field of vision with Trinità dei Monti church peering down on you, as if from heaven.

Although they are officially named for the church that sits atop them, generations of visitors have found it much easier to simply identify them by the Piazza at their feet – Piazza di Spagna. 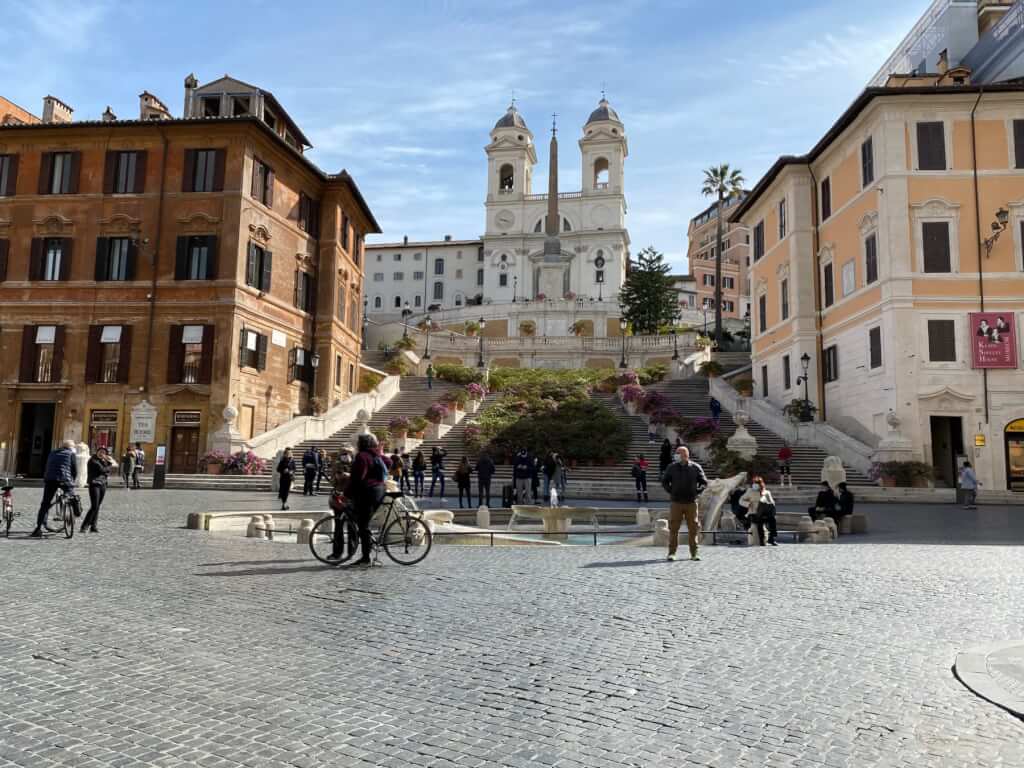 To delve into the major attractions of Rome’s historic center, including the Spanish Steps, try our Welcome to Rome tour for an inside scoop on the history of city.

Brief History of the Spanish Steps

In the 17th century the men who were in charge of building Rome had a problem in the shape of a wooded hill. It separated the newly-built Trinità dei Monti church, owned by the French, from the Piazza di Spagna, named for the Bourbon Spanish Embassy that stood alongside it.

With peace between France and Spain, the French wanted to create a symbolic connection between the two countries in Rome and this hill was really cramping their style. A competition was held for the best design and the winner, a little-known sculptor named Francesco de Sanctis, gave the world the Spanish Steps.

There is still some debate around how much the more famous Alessandro Specchi contributed to the design, but one thing we can say for sure is that the end result is one of the grandest public work in Europe. The 135-step staircase is also bookended by two of Rome’s most whimsical monuments, the Fontana della Barcaccia, and the Sallustian Obelisk.

The first foreigners to make the steps famous were the Romantic writers of the 19th century, like John Keats, who died in a house overlooking them. Since then everyone from Audrey Hepburn in A Roman Holiday to Ray Romano in Everybody Loves Raymond, has made the Spanish Steps part of their Roman sojourns.

Things to see near the Spanish Steps

In 1598, record floods along the Tiber river filled Piazza di Spagna with over three feet of water. According to the story, the wreckage of an old boat that had floated through the streets finally come to a rest there.

This unfortunate boat is said to be the inspiration for the fountain commissioned by Pope Urban VIII and sculpted by Pietro Bernini and his son, the great Gian Lorenzo Bernini. What sort of boat it might have been, we’ll probably never know, but the sculpture depicts something akin to a half-sunk galleon spilling water a little forlornly over its sides.

Lording over this sculpture is the Sallustian Obelisk, sitting at the top of the Spanish Step. A great stone plinth that looks like one of the many obelisks that Roman emperors transported all the way from Egypt, it is in fact a clever Roman copy. The sculptors even went so far as to copy the hieroglyphics from the “authentic” Flaminio Obelisk, one of Rome’s most famous.

Italy was one of the greatest visual and cultural inspirations for the Romantic writers and artists of the 18th and 19th centuries. You can follow Shelley and Byron’s footsteps in Lake Como, trod the path of Goethe in Sicily, and search for the ghost of D.H. Lawrence among the lemon groves of the Amalfi Coast.

If you want to see the Romantics in Rome, you have to go to John Keat’s House overlooking the Spanish Steps. We should perhaps point out that this is really more the house that he died (of tuberculosis) in than the house he lived in, but then, turning a symbol of life’s fleetingness into a museum to the Romantics is strangely fitting. 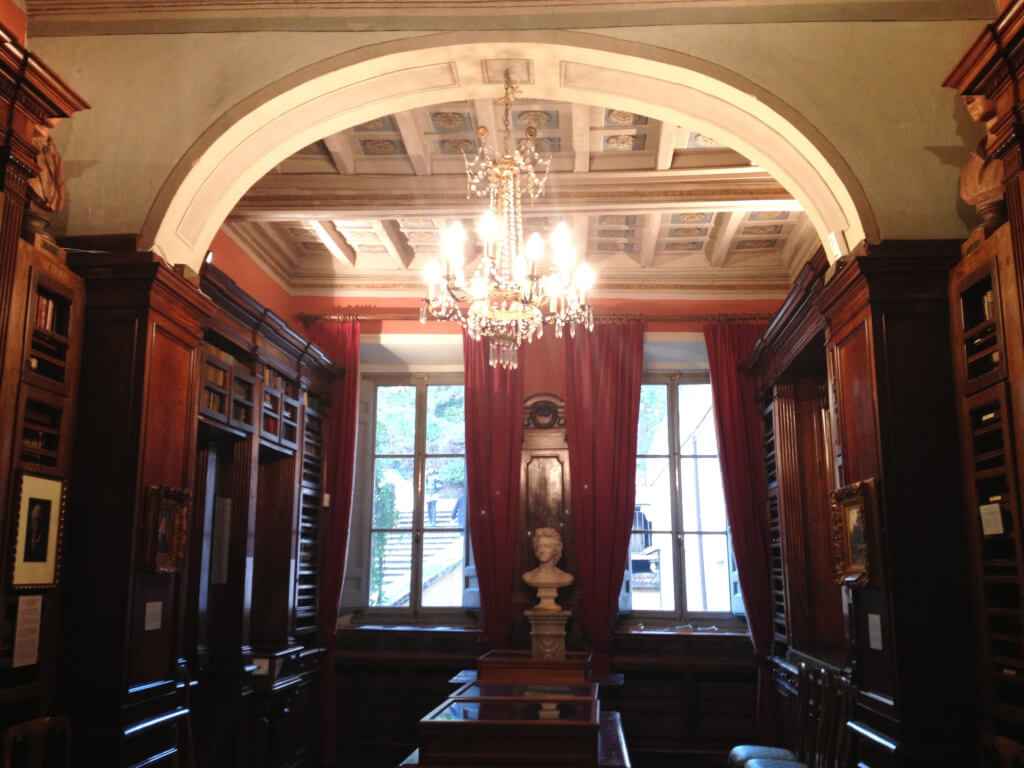 Here you will find what is perhaps the world’s most extensive collection of memorabilia from this incredible generation of mostly English artists, including works from Keats and Shelley, Wordsworth, Oscar Wilde, and more.

While inside, take a moment to try to hear the sound of the waters from the Fontana della Barcaccia. The story goes that the sound soothed Keats as he lay dying and was the inspiration for the line he requested on his epitaph: “Here lies one whose name was writ in water.”

The Church of the Santissima Trinità dei Monti

The Trinità dei Monti is, by one of the many quirks of Roman history, maintained by France, making it perhaps the most famous French church that’s not in France. Although the outside, and its crowning location at the top of the Spanish steps is more famous than its interior, it does feature a beautiful painting of the Deposition by Daniele Da Volterra.

Volterra is, somewhat unfairly, a running joke among art historians because he was given the thankless task of painting trousers and loin cloths onto the nude figures in Michelangelo’s Last Judgement in the Sistine Chapel. His nickname ever since? Il Braghettone or, “The Trouser Maker.”

Since August 2019, sitting on the Spanish Steps is no longer allowed. It’s also forbidden to eat or write on them and fines can be hefty for offenders. It seems harsh, but these measures are in place to protect important landmarks and historical monuments in the city.

The Spanish Steps are a public work and open year-round except for renovation.

The Best Time to Visit the Spanish Steps

As one of the most popular attractions in Rome, the Spanish Steps are often busy. If you ever want to have them to yourself you have to wake up pretty early or stay up late, but it’s not impossible. Just don’t expect much privacy if you go between 9:00am and 1:00am.

Read More: The 14 Italian Piazzas that Every Traveler Should See