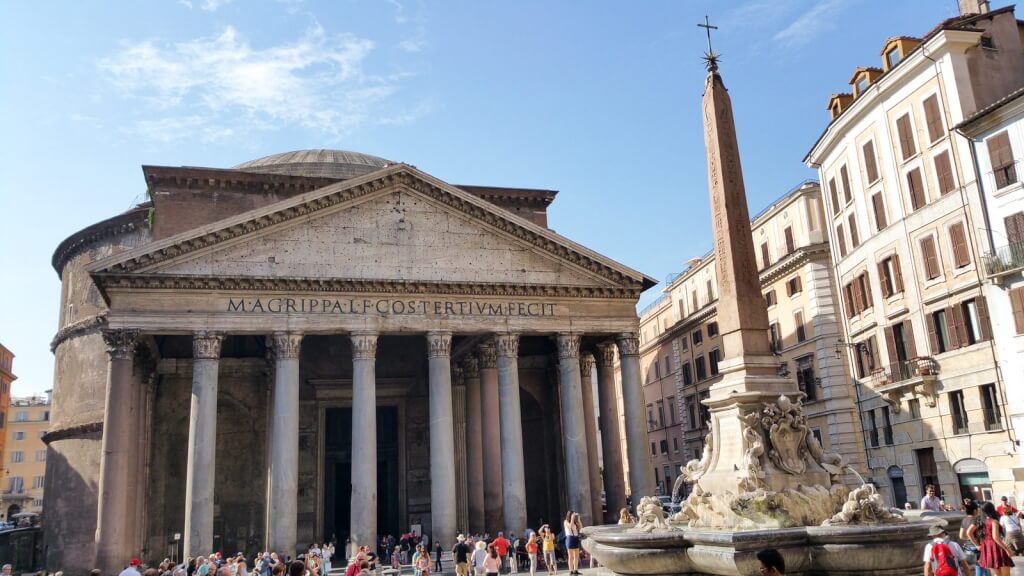 Roman Pantheon from the Inside Out: History & Fascinating Facts

The Roman Pantheon is, without a shadow of a doubt, the greatest surviving structure from the ancient Roman Empire. And not only does it survive, it radiates a vision and elegance that are nothing short of modern in their execution.  To stand on his porphyry-inlaid floor and look up into the giant occulus in its dome is to forget completely that you are standing in a super-structure built nearly 2,000 years ago.

On paper it is another temple among many dedicated to the pagan gods of Rome. In practice it is a colossal structure topped with the largest unreinforced concrete dome in the world – a feat of engineering that required such painstakingly precision no one has dared to attempt it since.

One of the main reasons it remains in such remarkable condition is that it has never fallen out of use. Since the 7th century it has been used as a Christian church, and you can still attend worship there on Sundays if you want to take in one of the most unique and breathtaking sanctuaries on earth.

What to See when visiting the Pantheon

The gigantic portico of the Pantheon is framed by 16 granite columns, each a single piece of stone measuring 39ft tall and 5ft in diameter and weighing 60 tons. As if their scale weren’t enough, each had to be imported from Egypt via a system of barges and boats with help from plenty of slave labor.

Modern engineers still haven’t figured out every detail of how people in the first century BC managed to transport the gigantic columns, along with Rome’s famous Egyptian obelisks, over such long distances, and they probably never will. In ancient times the portico probably featured ancient bronze relief statues along its roof. This is the same bronzework that some archaeologists believe was ordered stripped by Pope Urban VIII in order to it for Bernini’s baldachin in St. Peter’s, but the jury is still out. 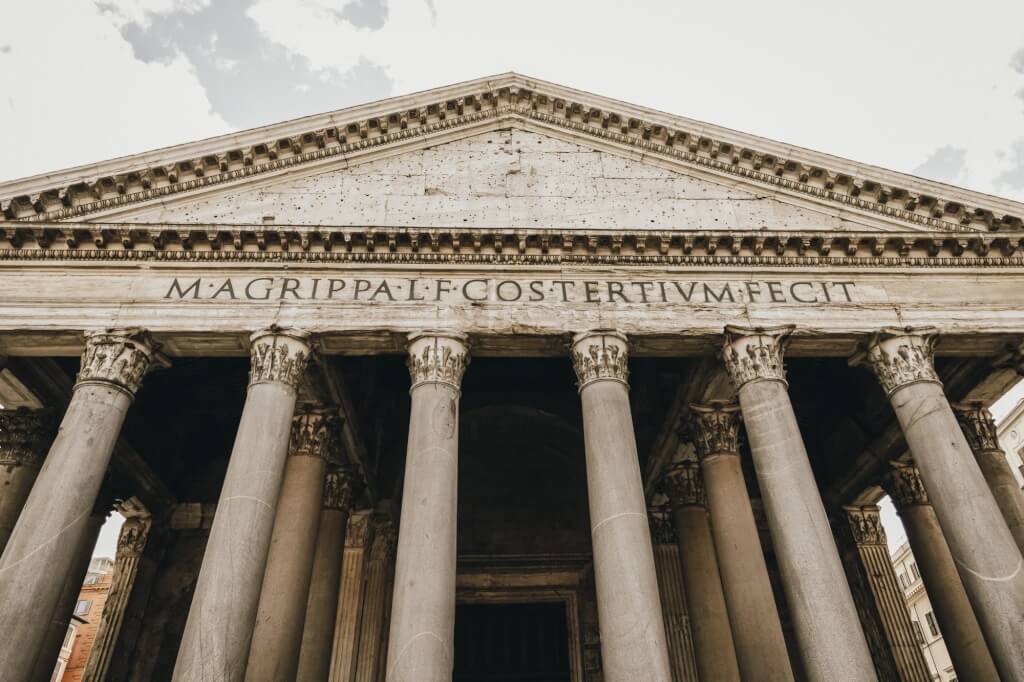 When we think of ancient Roman architecture the first thing that comes to mind is marble. So you might be surprised to learn that the big innovation of Roman architecture wasn’t with stone work, it was with that most “modern” of building materials – concrete.

At its simplest, concrete is a mixture of wet ingredients mixed with small pieces of stone (aggregate) for toughness that sets due to a chemical reaction. It has been in use since before the advent of recorded history but the Romans were to first to employ it for large scale, curved super structures, the shining example of which is the Pantheon.

Roman concrete (as opposed to modern “Portland” Cement) is a mix of water, lime, and volcanic ash called Pozzolana. In order to build a 5,000 ton dome out of it that wouldn’t collapse in on itself, workers had to create coffered concrete blocks that al conformed to precise dimensions so they could be stacked, on on top of another, to form the graceful curve of the enormous Dome.

Even the tiniest deviation in shape in a single block would have thrown off the entire Dome as they built toward its apex. Not only did the shapes have to be right, the density of the blocks had to decrease as they went up. If the top of the dome was as heavy or heavier than the base, it would be structurally unsound and eventually fall. 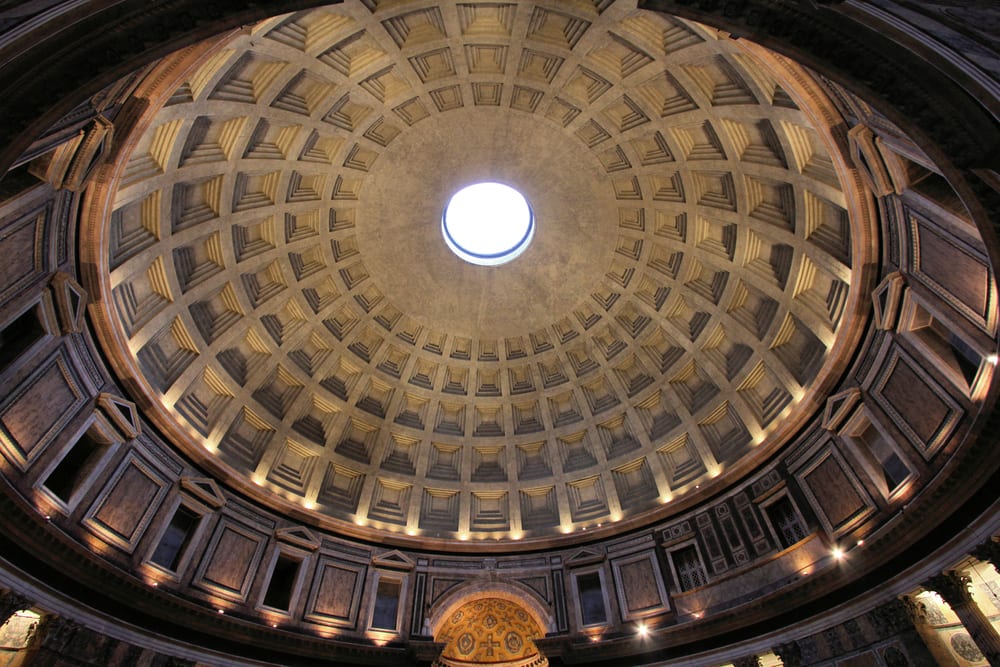 In order to work around this, the designers used lighter aggregates in their blocks as they got higher so that the blocks near the top of the dome contain pumice and tufa (comparatively light stones) while those near the base contain brick and travertine.

142 feet above the floor, the 30-foot oculus opens to the heaven and lets natural light spill in, moving in a reverse sundial effect through the interior during the course of the day. Given the the building has been open to the elements for nearly 2,000 years the floor has head up very well. If you take a close look you’ll see that drainage holes are cut into it allowing rainwater to drain away without puddling on the stone and doing lasting damage.

A Bit of Trivia

Whether or not the bronze that Pope Urban VIII removed from the Pantheon did or did not go into Bernini’s divine baldachin, it definitely went into the making of cannons for the Castel Sant’Angelo. And not all Romans were particularly happy about it. A contemporary poem quipped: “What the barbarians did not do, the Barberinis did”. (Barberini was the last name of Urban VIII before he became pope.)

You might know that the Renaissance master Raphael is buried in the Pantheon. But less well known is that his fiancé is buried beside him. The story goes that Raphael was engaged to be wed to Maria Bibbiena but put off the marriage for six years (carrying on at least one affair in the meantime) until she died. It appears that Rafael’s motivations for marriage were basically connections.

No one know why the Pantheon was originally built. That it was a religious building is clear, but who or what was worships there remains deliciously vague. It seems, from contemporary writings, that “Pantheon” may have only been a nickname for the building, but what it was actually called and what purpose it was meant to serve is still a matter of conjecture.

The Pantheon was one of the buildings studied by Filippo Brunelleschi when he was was trying to figure out how to construct the massive Dome on the Florence Cathedral. 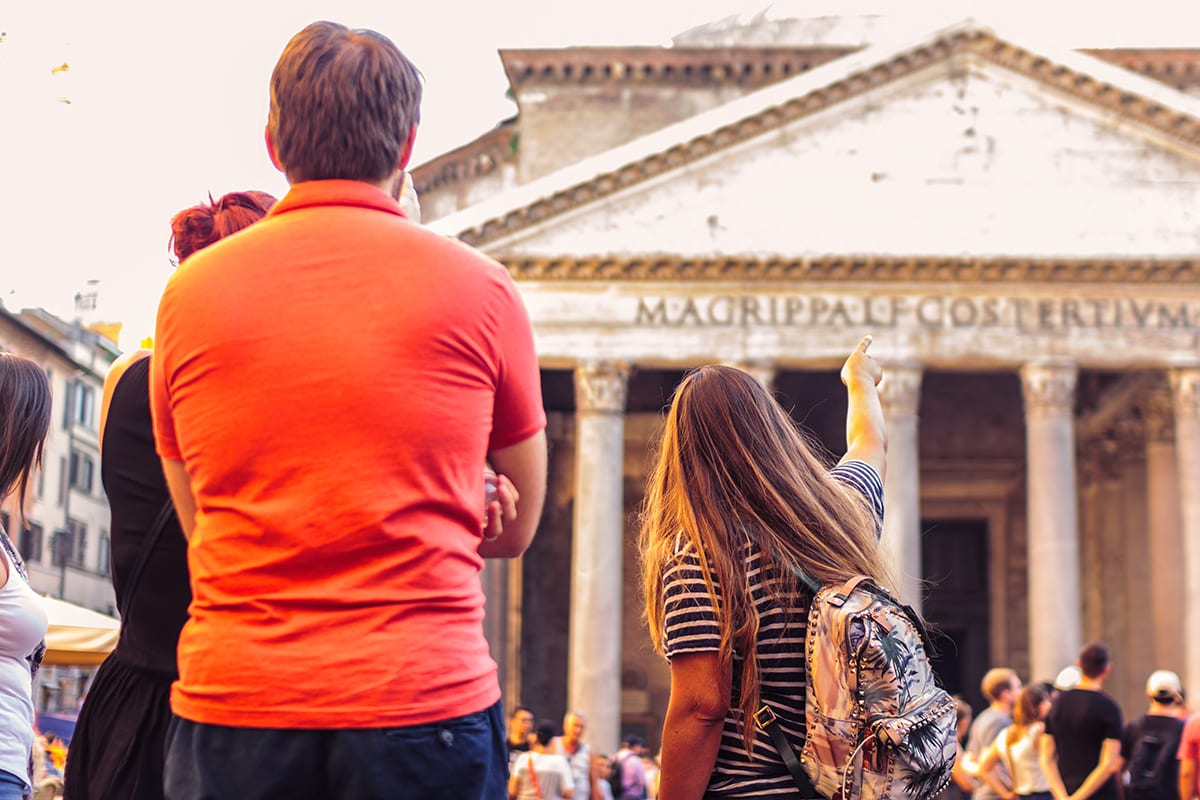 Tips for Visiting the Pantheon

The Pantheon opens every day at 9:00am and closes at 7:00pm (last entry at 6.30pm). To visit the Pantheon on weekends and public holidays, you are required to book the visit at least one day in advance. Admission is free from Monday to Friday. It closes on January 1st, August 15th and December 25th.

Please check their website for latest updates as times may vary depending on special religious events.

The Best Time to Visit the Pantheon

Despite the fact that you could fit a 143ft diameter sphere inside the central atrium, it can be packed with visitors during the high season. Avoid visiting midday and the afternoon if possible. As with most of the more famous public works in Rome, the best times to visit the Pantheon are early – right when the doors open at 9:00am, or just before it closes in the evenings. To get the full impact of seeing the dome from the inside try to go on a day with plenty of sun, the sight of light pouring down from the glowing oculus is indescribably affecting.