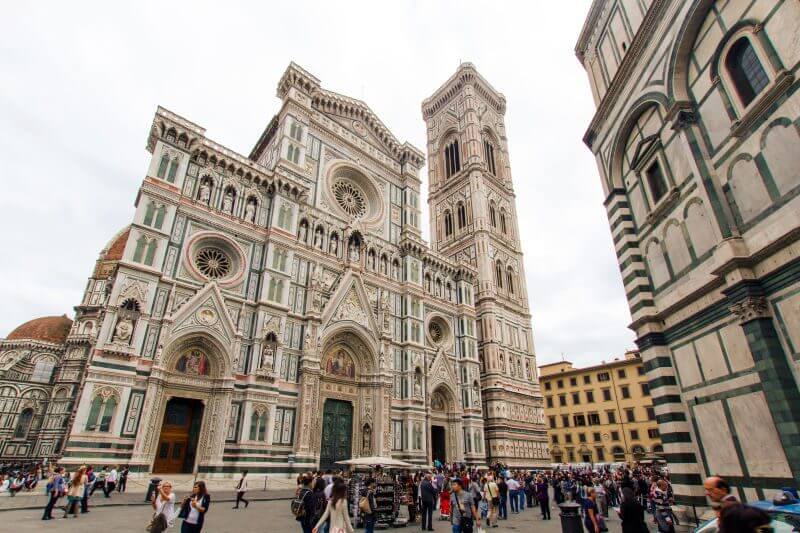 The Florence Cathedral: What to see, tips for visiting and more 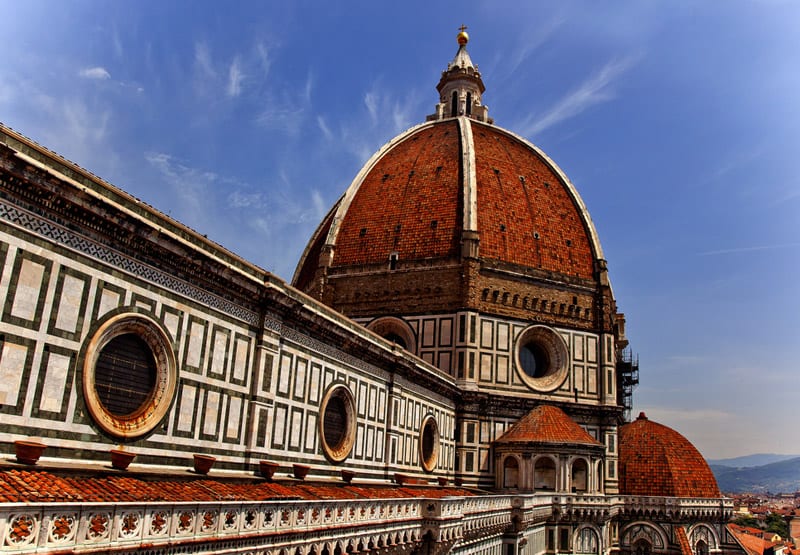 The Florence Cathedral is a masterwork of many men working over the course of many years to create something that would proclaim the wealth, ambition, and erudition of Florence. In order to do so they recovered lost knowledge, pioneered new types of painting, competed ferociously among themselves and eventually triumphed in one of the most improbable stories in the history of architecture.

The Florence Cathedral might not be the largest or the prettiest, but the accumulated knowledge that it represents make it one of a kind.

What to see when visiting the Florence Cathedral

For some 500 years (until the modern era) the Dome of the Florence Cathedral was the largest in the world. It’s still the largest brick dome in the world and the story of how it was built is one of the most fascinating in the history of architecture (to learn more, check out our post on the 7 Things You Didn’t Know About the Incredible Florence Duomo).

It was built by Filippo Brunelleschi by literally recovering architectural knowledge that had been lost since antiquity. Through detailed studies of Roman ruins and plenty of his own calculation, Brunelleschi gave the cathedral the most impressive roof in the world at the time. Today, it stands as a monument to human achievement as well as the intellectual and aesthetic currents that created the Renaissance.

The Florence Cathedral begun in 1296 and mostly completed in just over 100 years; the problem was the Dome. The project’s overseers knew what they wanted – the largest dome in the world – the problem was building it.

This was particularly vexing because the rest of the church was already built and they either had to make good on their ambition or endure a church that was open to the elements 365 days a year. They HAD to build the biggest than the world had ever known. And so they did what all Renaissance Italians did in times of doubt: they held a competition. 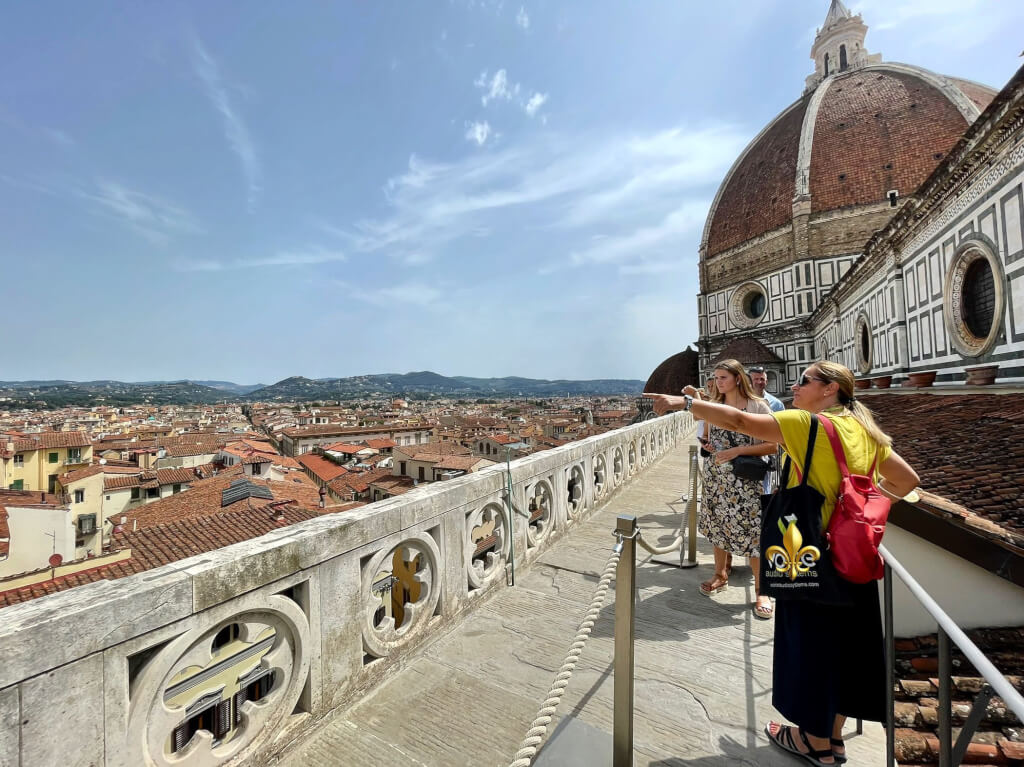 Thus enters the diminutive hero of our story, Filippo Brunelleschi, a man described by the Art Historian Giorgio Vasari as “small and insignificant in appearance,” but the type of person “with spirits to full of greatness and hearts of such boundless courage that they have no peace until they undertake difficult and almost impossible tasks and bring them to completion”.

Brunelleschi had already single-handedly “discovered” the rules of linear perspective, and along with his friend Donatello, spent a few years in Rome studying ancient ruins to learn design techniques long thought lost. He presented a design in the competition that seemed to be the answer to everyone’s problems. The only issue was that he wouldn’t tell anyone how it worked, for fear of having his idea stolen.

Simply put, he would create two domes, one inside the other like a Russian doll. The walls would be encased in tension rings, like the rings on a barrel, and the bricks would be arranged in herringbone patterns to ensure even greater structural strength.

He built special scaffolds to keep his workmen from falling, invented an entirely new lifting mechanism to pull building materials off the ground, and even created a special stew to feed his workers that still popular to this day in Florence, and he did it all while feuding bitterly with his co-superintendent, Lorenzo Ghiberti, who had beaten him in the previous contest to design the doors of the Florence Baptistery.

On March 25 1436, the project was finished and Pope Eugenius IV consecrated the cathedral, which now possessed the largest Dome ever known. Today, you can go all the way to its top to look out over the city but don’t forget that the real marvel is sitting right beneath your feet.

We run the VIP Florence Duomo: Exclusive Access to Cathedral, Terraces & Dome Climb that gives you access to otherwise closed off areas to the general public.

The funerary monument – actually a fresco, you might notice – is an interesting piece of art more for what it doesn’t do than for what it does. Namely, it doesn’t use perspective correctly. If you look at the horse and rider, they appear at one angle while the pedestal they stand atop appears at another.

Although mathematically-determined linear perspective would have been known to the artist, Paolo Uccello, he wasn’t able to employ it properly in the painting. Given that its subject was a somewhat unsavory mercenary who spent most of his professional life riding around Europe fighting, or not fighting in certain cases, for whoever would pay him enough money, the mistake doesn’t overly tragic.

The Original Façade, Penitent Magdalene and Michelangelo’s other Pieta

Many people don’t know that the façade of the Florence Cathedral is not the one that was originally designed by the Cathedral’s main architect, Arnolfo di Cambio. His was a stunning font piece featuring works by Donatello and Nanni di Branco among others.

Unfortunately, he died before it could be finished and it was eventually torn down. Luckily for present-day visitors, the curators and artisans behind the Duomo Museum have, after some impressive historical detective work, managed to reconstruct the façade, which they have put on display in the Museum. Across from it, in their original orientation, are Ghiberti’s actual baptistery doors (the ones outside that everyone crowds around and touches are replicas).

30 years of penitence in the desert is enough to ruin anyone’s skin. For proof, look no further Donatello’s Penitent Magdalene (Maddalena Penitente), but don’t say we didn’t warn you. This wood sculpture is one of the strangest and most hyper-realistic images produced by the entire Renaissance, in it the bible’s most famous prostitute appears drawn, emaciated, ravaged by the elements, slightly macabre, and nothing less than utterly compelling.

If it’s pathos you want, look no further than one of the greatest failures in art history, Michelangelo’s unfinished Pieta. It was intended to be a sculpture similar to his masterpiece in St. Peter’s Cathedral but instead of adorning a church, it would sit atop his tomb. A notorious perfectionist, Michelangelo eventually grew unhappy with the way it was going and took a hammer to it.

It’s rare to be able to peek inside the shortcomings of a great mind, but that’s exactly what this half-finished sculpture affords you. Both the Penitent Magdalene and Pietá sit inside the Grand Museo del Duomo.

With all the time he spent annoying Brunelleschi during the building of the Duomo, it’s often forgotten that Lorenzo Ghiberti was a master in his own right. In fact, he was one of the top artists of the entire Italian Renaissance and it was the commission for his two masterpieces – the Florence Baptistery Doors – that tipped off his entire feud with Brunelleschi in the first place. 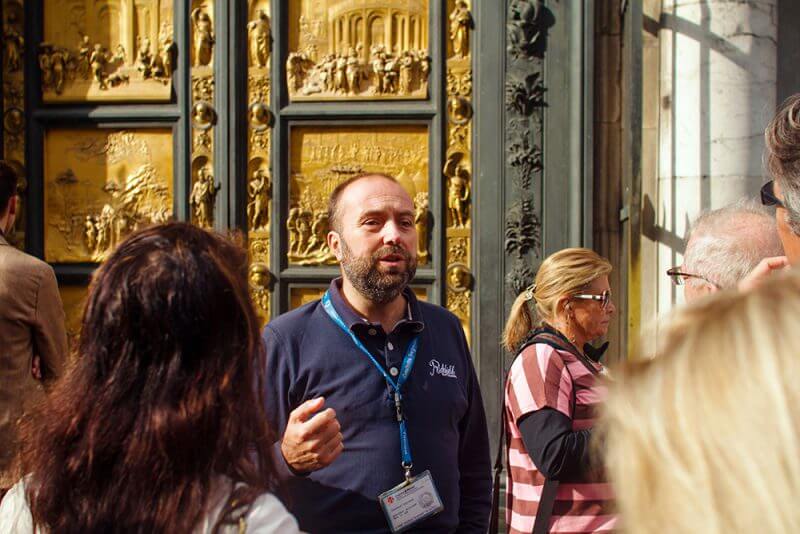 He actually created two sets of doors, the first depicting scenes from the new testament and the second, more famous set, depicting scenes from the Old Testament. It was this second set, which is more naturalistic and makes better use of perspective that Michelangelo nicknamed the “Gates of Paradise”. Interestingly, the Gates of Paradise that currently sit on the baptistery are replicas. If you want to see the real ones you have to go into the Duomo Museum.

Tips for Visiting the Florence Cathedral

Opening Times:
Visitors to The Florence Cathedral will find that it’s actually divided into 6 separate parts – the Cathedral, the Dome, the Baptistry, the Bell Tower, the Crypt, and the Museum. This being Italy, each of those parts has a different opening times depending on the day of the week.

Luckily, the Duomo museum website has an easy-to-use calendar that lets you see the opening hours of all 6 areas for whichever day you would like to go.

Tickets:
Entrance to the Cathedral itself is free (just queue in front of the facade), however, if you want to see the works of art in the Museum, climb to the top of the dome, enter the Baptistery, and/or climb to the top of the ticket costs varies from €5 to €20. Children from 7 to 14 years old only pay a reduced price and children under 7 are allowed free entrance. Please check the Duomo museum website for full details of ticket prices.

Please note that from August 6th, 2021, the digital Covid Health Certificate – or ‘Green Pass’ – is mandatory to visit the monuments.

Since the Cathedral complex is an active place of worship appropriate clothing must be worn at all times. This means that both men and women need to wear clothes that cover their shoulders and shorts or skirts that reach past their knees. Anyone not dressed appropriately will be refused admittance.

Open food and drinks are not permitted in the cathedral, no pets are allowed, and cellular phones must be turned off or set to silent.

Photos are allowed but only without flash. No tripods or selfie sticks. Like the rest of the museums in Florence you aren’t allowed to enter with a large suitcase. Unlike many of the museums, there is not coat check where you can leave it so plan accordingly.

The Best Time the See the Florence Cathedral

In the high season (roughly May through September) the Florence Cathedral stands side by side with the Vatican on the list of longest wait times in Italy – with waits of up to two hours to enter the cathedral and another two hours to climb to the top of the dome.

However, it’s worth mentioning that you can walk directly into the museum on any day of the week and the line for the bell tower is usually shorter than the one for the dome climb. Another thing to bear in mind is that the bell tower has 414 steps and the dome climb has 463. Neither have elevators. It takes a very hearty soul (with strong legs, to boot) to make climbs like these in the middle of an Italian summer.