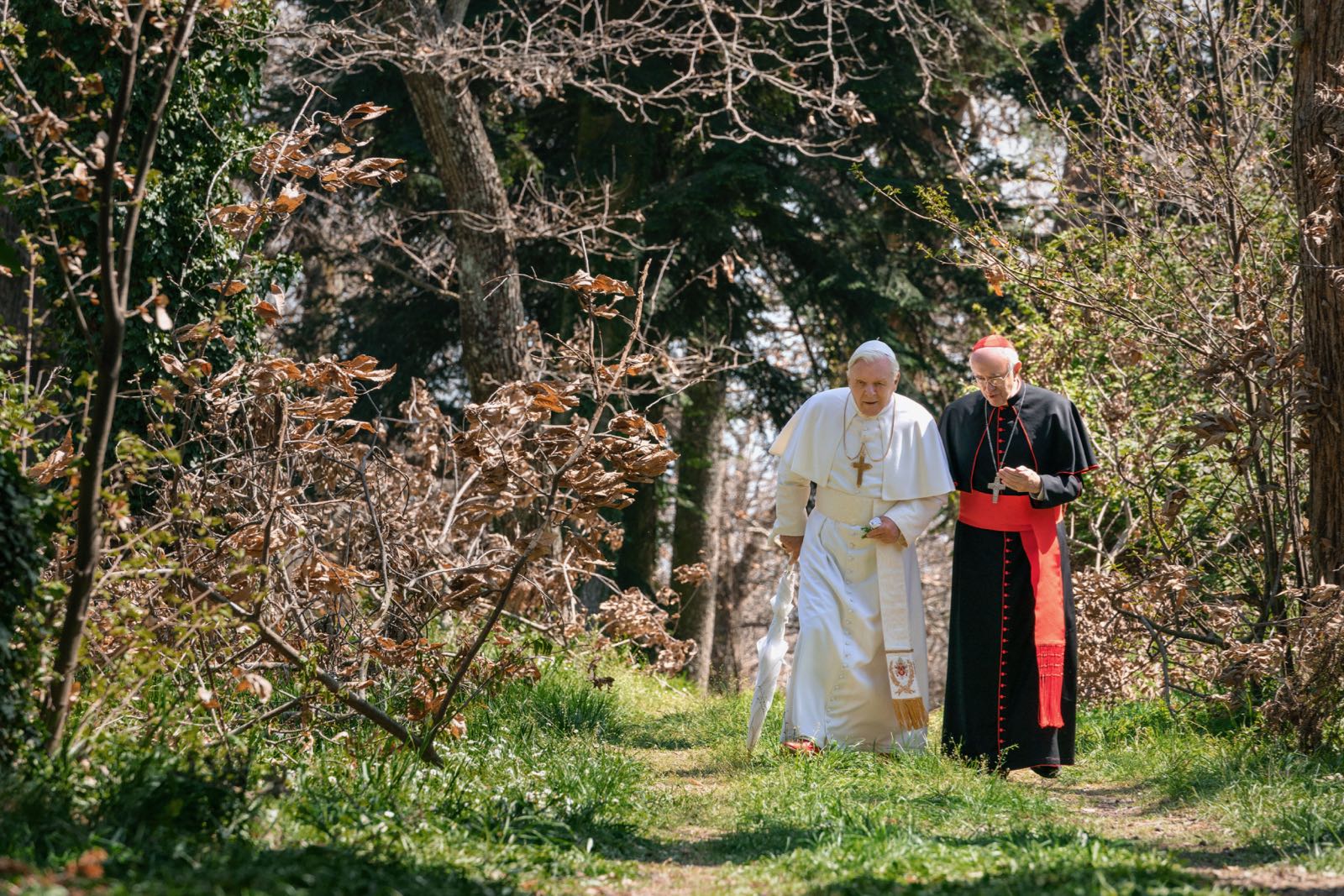 One of the most important aspects about a film is the scenery, and as filming locations go there are few places that could be more impressive than those featured in Netflix’s The Two Popes.

Set amidst the resignation of Pope Benedict XVI (Anthony Hopkins) from the papal office, the film centres on a number of conversations that took place between Pope Francis (Jonathan Pryce) and Benedict before and after the latter stepped down from his role.

Of course, a tête-à-tête with two popes could go a number of ways. But, while juxtaposing the traditionally conservative character of Benedict with his liberal counterpart in Pope Francis, screenwriter Antony McCarten chose instead to centre the film on the people behind the titles.

Even as their viewpoints clash, the film aims to shine a light on their similarities rather than their differences.

Nevertheless, centring on such an historic encounter, the script demanded to be realised on a grand scale. Cue large replicas, gardens and palaces. Here, we take you behind the scenes at the spectacular locations that feature in The Two Popes.

See the magnificence yourself with our guided tour of Castel Gandolfo, including access to the Papal Palace and the stunning Barberini Gardens.

The visually stunning Castel Gandolfo serves as one of the primary locations of The Two Popes.

Home to the pope’s historic summer residence, this picturesque town lies forty minutes train ride from Rome and has been used since the Roman times as a retreat from the heat and crowds of the Italian capital.

The palace itself was built during the 17th century as a retreat by Pope Urban VIII to get away from life in Rome. Since then it has been almost consistently in use and even served as a refuge for Jews during World War 2, housing several hundred under the protection of an ensemble of volunteers and guards.

After he resigned, Benedict marked the end of his papacy within the Palace at Castel Gandolfo, choosing to remain there until the new pope was voted in by the Papal Conclave. Duly, when Pope Francis was elected, the two popes historically met here on March 23rd, 2013. Instantly, photos of the pair embracing at the helipad of Castel Gandolfo proliferated in the media and headlines speculated about their 45 minute meeting. This made it one of the prime locations for The Two Popes.

Along with a number of changes he made when he came into office, Pope Francis opened the Papal Palace and gardens of Castel Gandolfo up to the general public to visit. However, speaking to Architectural Digest production designer Mark Tildesley explained that while the crew obtained permission to film exterior shots, they weren’t permitted to film inside the palace itself. Instead they used two other palaces on the outskirts of the city to film the interior and close-ups.

This goes to show what a rare opportunity it is to visit the grounds – one that might not be around for long depending on whether or not the next pope decides to continue this tradition and keep the grounds open to the public.

Read more: Discover why Castel Gandolfo is the Roman Day Trip You Didn’t Know You Needed

Setting a film in the Vatican comes with its challenges, especially when one considers the Vatican doesn’t permit the filming of fiction features inside the grounds. As it happens, the Vatican only allows documentaries to shoot inside, and even that is on a case by case basis.

Speaking to GoldDerby, Tildesley described how he got around this rule by using a mixture of substitute locations to recreate the Vatican on-screen. With minute research and location scouting, they tracked down a number of buildings constructed during the same period as the Vatican. Filming on location at Castera, Mondragone and Caprarola among others, they re-created the look and feel of the Vatican for the exterior shots.

Of course, replacements can only hoodwink viewers so much, especially those who have visited the Vatican themselves. To get a faithful representation of the Vatican’s detail, the production designers also worked with historians and expert artists to recreate a number of rooms including the Room of Tears, Vatican offices and the incredible Sistine Chapel.

Speaking to AD, Tildesley explained how the Sistine Chapel was created through an eight-week process during which a group of designers essentially ‘tattooed’ copies of the paintings onto walls at the Cinecittà Studios in Rome. This allowed the depth and vibrancy of the works to come to life without spending hours recreating the paintings (which they considered doing for a time!). The end result? So realistic it even convinced the Vatican experts they brought in to inspect the room before filming!

Planning a trip to the Vatican? Read our guide to Visiting the Vatican Museums