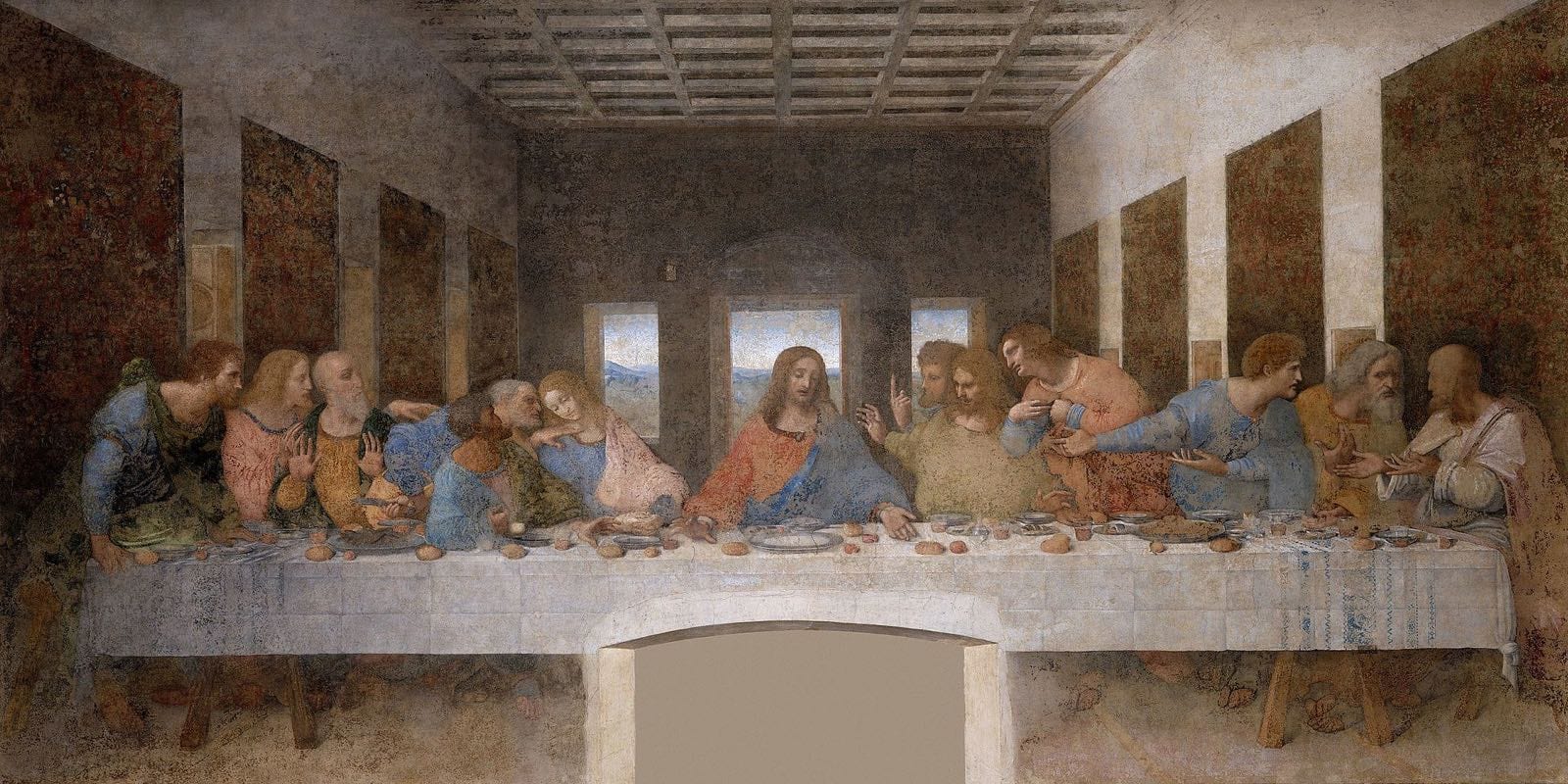 Leonardo da Vinci began painting The Last Supper in 1495, and over five hundred years later it has become one of the most prolific paintings in history. Tickets to see it are treated like gold-dust, and for good reason. Full of symbolism, secrets and speculation, The Last Supper is a painting with a violent, and rich past. But along with conspiracy theories surrounding Judas’ depiction, spilled salt and whether or not Mary Magdalene is present among the apostles, a more pressing concern takes centre stage: The efforts to restore the quickly disintegrating masterpiece.

Leonardo da Vinci was commissioned to paint The Last Supper at the Santa Maria delle Grazie monastery by Ludovico Sforza, Duke of Milan. The Duke intended for the church to become the Sforza family mausoleum. Da Vinci, however, had much bigger aspirations for this piece. Yet to paint the Mona Lisa, by 1495 da Vinci had showcased his skill with works such as Portrait of an Unknown Woman  and The Virgin of the Rocks. He had built up quite the reputation – but for all the wrong reasons. Da Vinci consistently failed to deliver commissions on time and often, failed to deliver them at all. The praise his artistic skill had earned him was quickly being replaced with sneers and jokes at his expense. His peers were even suggesting that he was no longer able to finish a painting. A grand biblical scene which depicted the final supper before Jesus was betrayed was just the opportunity he needed to showcase his skill. So with Sforza’s commission, Leonardo set out to save his name.

The disintegration of a masterpiece

Ever the innovator, it’s not surprising that Leonardo wasn’t content to play by the rules when he began painting The Last Supper. Unfortunately, this led to many of the problems we face in preserving the masterpiece. Traditional fresco methods used during the Renaissance focused on applying wet plaster to the wall. This required the painter to work fast, preferably with a pre-set plan of how the piece would turn out. With little experience painting on a surface this big or with traditional fresco techniques, Leonardo decided instead to experiment with a method that would allow him to work at his own pace. He used paint tempura, mixed with egg, oils and other binding agents and applied this to dry wall. This let him work on the painting for a longer period of time – a total of three years spanning from 1495 to 1498. It was a risky experiment and one that proved disastrous. By 1517, less than 20 years since the The Last Supper was completed, the paint began to flake away from the wall, while records from 1582 state that by then it was “in a state of total ruin”.

However, Leonardo’s experimental techniques weren’t the only thing to blame for the painting’s failure to stand the test of time. The location of the painting in the Santa Maria church wasn’t exactly an ideal spot for a masterpiece. Exposed to a naturally damp environment with constant flooding, the painting was also located in a room that was close to the kitchen and was constantly subjected to steam and smoke from the ovens for the earlier period of its existence.

Planning a visit to The Last Supper? Check out our detailed guide on tickets, times and other sights to see in Milan.

The historic neglect of the painting doesn’t stop there. Through the ages a number of incidents caused further damage to the already disintegrating mural. In 1652, a new door was cut into the North wall in the room housing The Last Supper which removed the section of the painting with Jesus’ feet, and caused much of the paint and plaster to become loose from the wall. Subsequently, when Napoleon’s army invaded Italy, the area was used as a stable for the troop’s horses and the soldiers passed the time by throwing bricks at the apostles’ heads. The painting underwent its most extreme challenge during World War II when a bomb from the Allied troops blew the roof off the church and broke down one of its walls. Sandbags were propped up against the painting and somehow it managed to survive the assault. However, it was left exposed to the elements for a number of months before the building could be rebuilt causing the painting to suffer a considerable amount of damage.

Want to see the masterpiece before it’s gone for good? Try the Best of Milan tour – which includes a visit to the iconic Last Supper at the Santa Maria Delle Grazie.

As it stands, some scholars estimate that less than half of the painting is Leonardo’s original work. While a small portion of it has been irrevocably lost, the remainder is the work of restoration efforts that have tried to recreate Leonardo’s work through the ages. Unfortunately these efforts weren’t always successful, and have caused many arguments over how much of the work is by da Vinci’s own hand.

As far back as the nineteenth century Charles Dickens voiced his criticism at restoration attempts when he viewed The Last Supper in 1845. He remarked that, “apart from the damage it has sustained from damp, decay or neglect, it has been so retouched upon, and repainted, and that, so clumsily, that many of the heads are, now, positive deformities”. The dramatist reacted, well, dramatically. However, much of the debate that exists today is based on later restoration attempts. In a dire state of neglect and disrepair, in 1978 Italian authorities decided to embark upon a major restoration of the painting. There were two main aims for this project: one was to protect the painting from further wear and tear, the other was to restore da Vinci’s original work and strip away years of built up grime, dirt as well as the historic efforts at reconstructing it. Art restorer Pinin Brambilla Barcilon accepted the epic task and embarked on a twenty year project to restore The Last Supper.

Pinin’s work consisted of a deep, yet careful clean of the painting’s surface using specialised strips dipped in solvents which removed layers of built up grime. Next, she and her team of specialists embarked on the task of filling in parts of the painting that had been lost. Using an easily reversible technique, they used faded water colours so that Leonardo’s original work would be easily distinguishable from that of the restoration. The result? More vivid colours, a cleaner picture and a clear disambiguation between what is left of the original and what has been added for a more complete representation of the painting.

But it’s impossible to please everyone and just like the work done on Michelangelo’s painting of the Sistine Chapel during the 1980s, restoring The Last Supper was bound to stir up some controversy. While many have praised Pinin’s work, others have argued that past historical restorations (which were removed as part of Pinin’s project) were a part of the painting’s history and have become an integral part of the story of The Last Supper. Viewed in this light, removing them is an erasure of the painting’s legacy. Art critics and historians have also taken issue with changes that have been made to elements of the painting during its restoration. One area of concern is the sleeve on Jesus’ right arm which is now draped over the table. In other versions of the painting completed by Leonardo’s own students, his sleeve is draped behind the table. Art historians have spoken out against such changes, claiming that it has altered Leonardo’s original intentions and affects the overall meaning of the painting.

Whether or not the work maintains all of the original brush-strokes of Leonardo’s hand, the fact that five hundred years later painting is as well preserved as it is – despite mould, flooding, and bombings – is nothing short of a miracle.