If you spend enough time in Italy you’ll inevitably hear someone asking: “Where is this Tuscia area we keep hearing about? Is it a village? A region? I’ve never heard of it before.”

Actually, Tuscia (also referred to as Etruria) is a historical landmass whose arm wraps around most of Tuscany, much of Umbria and parts of Lazio. It’s often called ‘the land of the Etruscans’ after the ancient civilization that roamed these parts from about 900 B.C. until their decline and absorption into the ascendant Roman Republic around 100 B.C.

Many inventions and technological advancements that we now associate with Romans actually originated with Etruscans, including winemaking, pottery wheels, certain types of metalworking, and the civil engineering ideas that went into building the famous Roman roads.

The Etruscans may be gone, but their mysterious spirit lives on in many of the enchanting sights in the area. The following are some hidden gems that capture something of the essence of this ancient civilization.

Bomarzo is a town in northern Lazio that’s home to one of the most stunning and unique Renaissance gardens in the world. As with many mannerist-style Italian gardens, the Parco dei Mostri eschews order and symmetry for whimsy and a certain stylized sense of fun. Designed by Architect Pirro Ligorio (who also built the Tivoli Gardens in Rome), it’s jammed-packed with creepy mythological creatures, mind-bending structures, and bizarre, haunting motifs. For some people, the Monster Park might feel dark and brooding, but to others it’s a breath of fresh air – lighthearted, whimsical and more than a little fun. 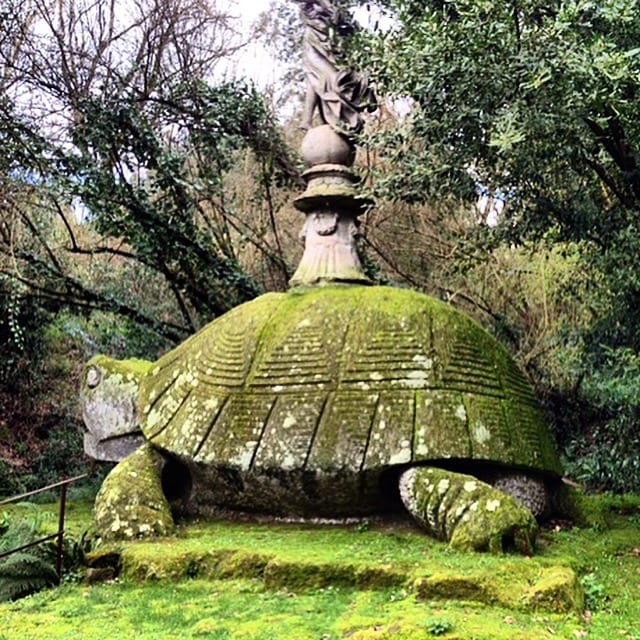 An enormous stone turtle in the Parco dei Mostri in Bomarzo

The story goes that Salvador Dali once visited Bomarzo and was so enthralled with the spot it inspired him to paint his surreal Temptation of Saint Anthony. We can’t confirm the story, but we can certainly see how you could make the connection.

Bathers lounge in the geothermic pools of the Terme di Saturnia.

According to an Etruscan/Roman legend, the hot springs of Saturnia were formed when Jupiter launched a lightning bolt at Saturn during a quarrel. Fortunately for Saturn (and for us) he missed and opened a great rift in the earth where hot watered poured forth. It’s more likely that the warm pools were formed by calcium carbonate deposits from the natural sulfurous hot springs accumulating over thousands of years, but who are we to say? 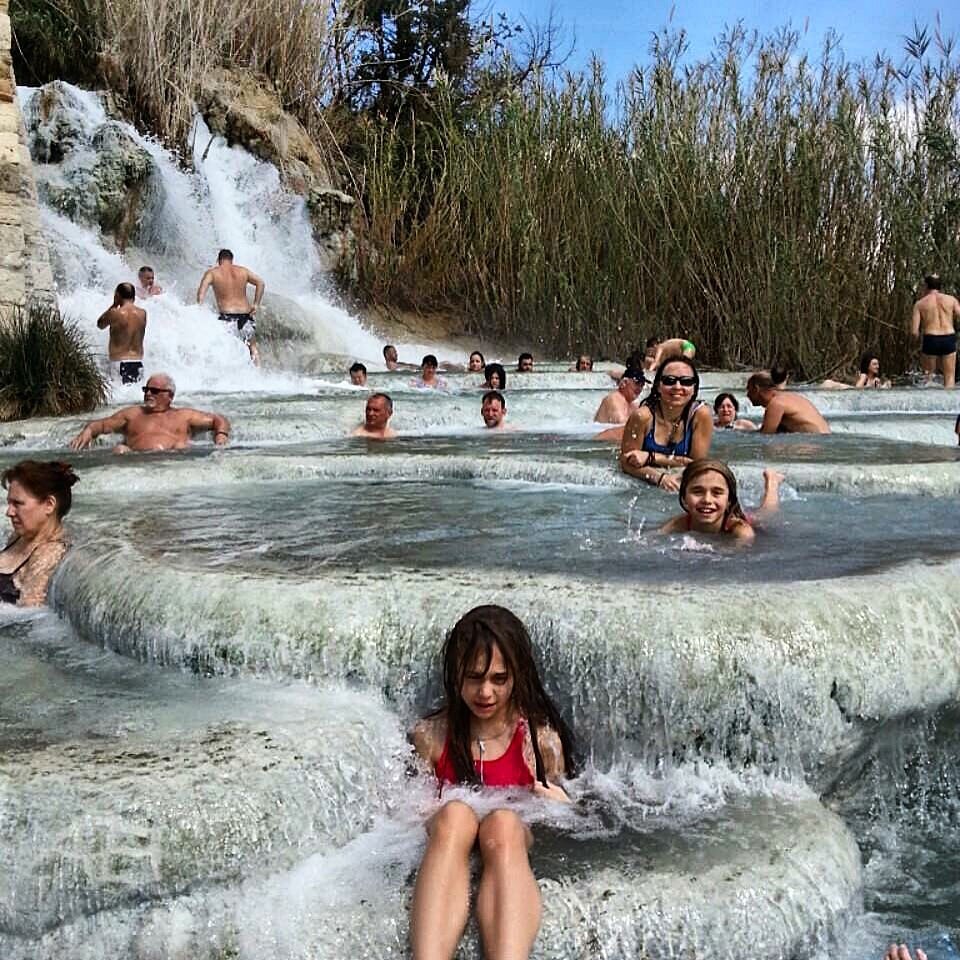 Adjacent to a luxury spa resort, Saturnia has two outdoor waterfalls, the most famous of which is the Cascate del Mulino, which features mineral-rich pools rising to temperatures of nearly 100° F/38° C. This, ahem, hot spot is absolutely free to the public and open all year round. 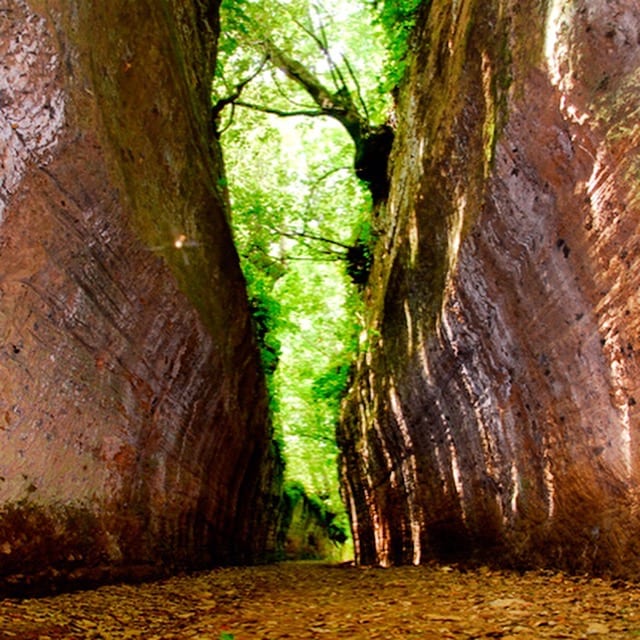 The Vie Cava are an ancient network of Etruscan roads surrounding Sovana, but their construction is like nothing you’ve ever seen. In English, ‘cava’ refers to an excavated road. This awesome artery was cut through 65-foot high tufa rock, presumably to create an easy path between settlements and the Etruscan tombs. Archeologists theorize that the chasm might also have been used as a system to direct rainwater or as an effective defense against enemies. If you go for a walk in the woods around Sovana you can tread a path that predates the birth of Christ.

La Scarzuola’s strange architecture stands out like a fantasy castle against the landscape of Central Italy.

This last destination is technically’outside the invisible border of Tuscia, but it’s nearby, and wonderful, so we’re including it…

Looking a bit like something out of an M.C. Escher drawing, La Scarzuola is a former Franciscan monastery originally constructed during the middle ages. In 1956, Italian architect Tomas Buzzi acquired it and transformed the property and grounds into a surrealist villa-cum-sculpture gallery with futuristic underpinnings.

In the way it juxtaposes symbolism, architecture, esoteric cultural references, and the beauty of the surrounding countryside, it’s similar to the Monster Park, but much more personal in nature. It’s often said that the work is Buzzi’s “autobiography in stone”. However you interpret it, most people find it bizarrely compelling.

How to Get There

Located smack dab in the middle of the country, Tuscia is about 75 miles / 120 km from the center of Rome and 125 miles / 200 km from Florence. Although there are some local train services to the area, we highly recommend touring by car to access these spectacular sites and all their surrounding towns and villages.

Orvieto, once a hotbed of Etruscan civilizations, is a great base for traveling around Tuscia. It has one of central Italy’s best locations (along the A-1 Autostrada and the main train line between Rome and Florence), but more importantly, it’s home to The Museo Etrusco Claudio Faina and ancient Etruscan tombs. Both are conveniently located in Orvieto’s historical center.

Pitigliano is smaller in population than Orvieto but packs a big punch with its sheer cliffs looking down into a dramatic ravine. A classic Italian experience is to watch the golden Tuscan sunset from the balcony of one of Pitigliano’s charming hotels or B&Bs.

Viterbo is the capital of the province, the home to the University of Tuscia and in close proximity to a wide area of thermal springs, which especially attracts visitors there. Surrounded by well-preserved medieval walls, the city can be entered through impressive ancient gates.

The dishes of Tuscia are famously earthy and rustic. Although the Etruscans didn’t leave cookbooks lying around (or any writings, for that matter), archeologists have been able to piece together their eating habits by studying relics and remains found in their necropoli. Their favorite foods seem to have been game, poultry and lots of pork.

Unsurprisingly, today, the traditional cuisine of central Italy includes porchetta (roasted pork), pigeon and dove, cinghiale (wild boar), as well as hearty soups (Tuscan bean and lentils are popular), in addition to rich sheep and goat cheeses. From a country trattoria to a fine restaurant, you’re sure to find one or more of these delicacies on the menu.