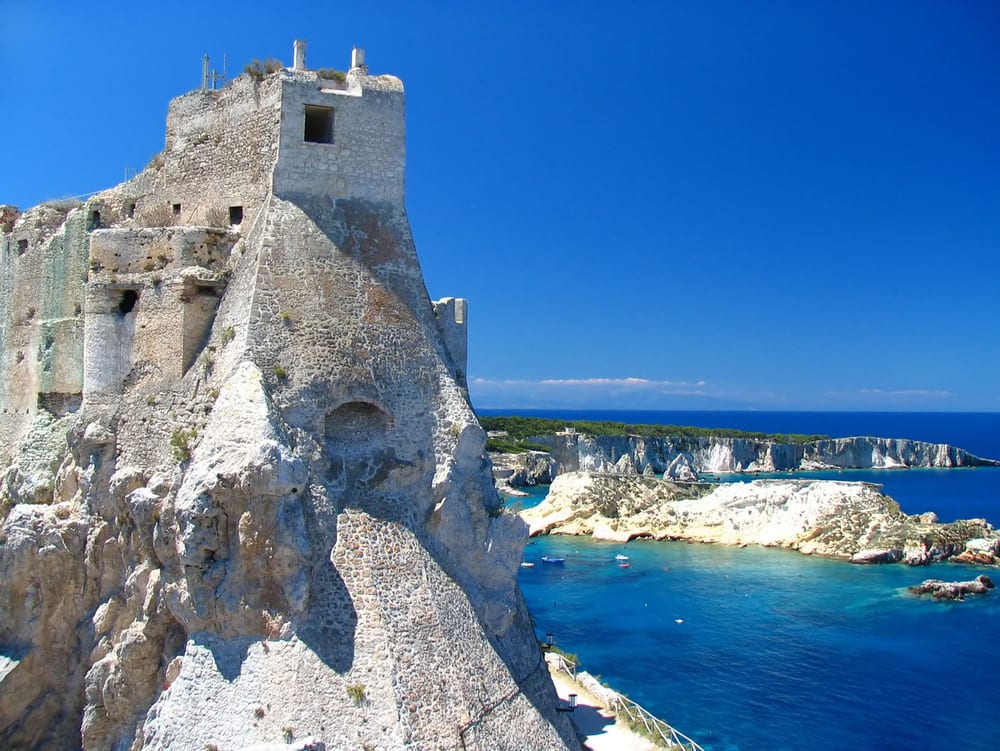 Not all ruins and churches, Italy has some of the most beautiful castles in Europe! Here’s our list, in photos, of the 10 prettiest castles in Italy. Castle on one of Puglia’s Tremiti islands

This sun-soaked clifftop castle is located on the island of San Nicola di Tremiti, in the Adriatic Sea. To get here, grab a boat can be taken from Puglia, Molise, Abruzzo or Le Marche. Located on a tiny volcanic island connected to the island of Ischia by a 720-foot bridge, the Castello Aragonese dates back to the 5th century B.C. To protect inhabitants from pirates, Alfonso V of Aragon fortified the castle in the 15th century. Today, visiting the castle is one of Ischia’s main attractions.

This 8th-century fortress isn’t just a castle, but a town—just as it would have been 1,000 years ago, when castle walls surrounded the hamlet to protect it from invaders. Walking around Castell’Arquato today, you feel as if you’ve wound up right back in the Middle Ages! 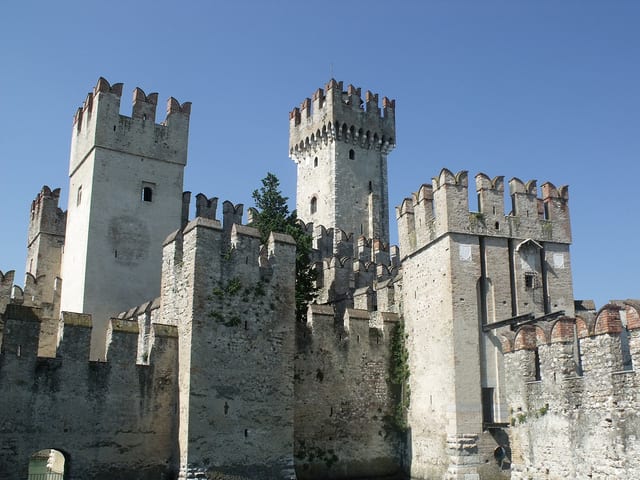 Located in the town of Sirmione on Lake Garda, the Castello Scaligero gets its name from the rulers of Verona, whose power extended all the way to here in the 13th and 14th centuries. It’s not just modern-day visitors who find the castle beautiful—in 1786, Goethe was arrested for making suspicious-seeming sketches of the castle! Castles are thick on the ground in the region around Trento, but Belfort Castle may be one of the most romantic. Built in the 14th century, and possibly earlier, today, all that’s left of the grand fortress is ruins.

Dating back to the 12th century (and rebuilt in the 14th and 15th centuries), the Rocca Maggiore towers from the hill of Assisi. It’s ruined today, but from up here, there’s a beautiful view of the city itself and the Umbrian valleys beyond. The Odescalchi castle of Bracciano

This 15th-century castle, an easy day trip from Rome, has been the residence of two different papal families (the Borgias and Orsini). More recently, it’s played host to some big-time weddings, including Petra Ecclestone’s $8 million wedding this summer! The name of this castle, “Egg Castle,” comes from a legend that Virgil put a magical egg into the castle’s foundations to support it. That’s not too likely, but what we do know is that the castle you see here was built by the Normans back in the 12th century, and later served as the seat of the Royal Chamber and of the State Treasury of Naples. It’s actually one of three different castles in Naples, so make sure you see them all! Castle of Fénis in the Valle d’Aosta

Located in a tiny village surrounded by the Alps, the castle of Fenis dates back to the 13th century, although it’s its 14th and 15th-century construction that you see today. Inside, you can see frescoes of St. George slaying the dragon and other decorations from the noble family that lived here. Along with beautiful ancient ruins, Sicily’s town of Taormina has a castle built by Muslim invaders in the 10th century; in later times, it was used as a monastery. You can’t enter the castle today, but you can get beautiful views of it—including from a second castle above this one, Castelmola Castle!

The 10 Top Towns of Tuscany

Ten Top Photo Ops: Where to Find the Best Views of Italy

25 responses to “10 of the Most Beautiful Castles in Italy”