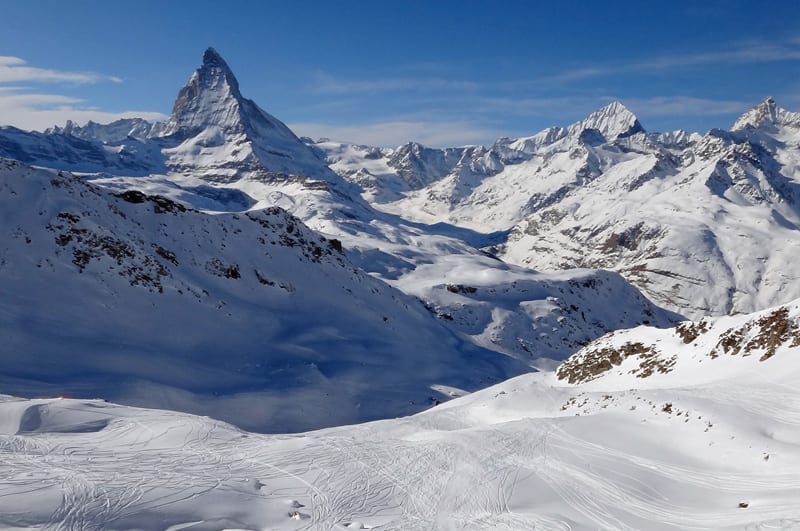 Where to Ski in Italy’s Alps

If you want to ski in Italy, you’re spoiled for choice! From the breathtaking Dolomites in the northeast to the staggering Monte Bianco (Mont Blanc), Europe’s largest mountain, in the northwest, dozens of top-notch resorts span the Italian Alps. Expect excellent piste (slopes) and lively après-ski scenes—all combined with the great food and laid-back attitude that’s the mark of bell’Italia.

Of course, deciding to go skiing in Italy is an easy choice. But choosing the right resort for your trip can be much more difficult. Each resort has something specific to offer its guests… so we’ve done the work for you. Here’s our list of Italy’s best ski resorts, depending on whether you’re looking for glamour or a family trip, are traveling with snowboarders or expert skiers, and more! (And don’t miss our post on deciding between the Italian Alps or the Dolomites!). Cortina d’Ampezzo is the James Bond of the Dolomites: glamorous, chic and always put together! In fact, its slopes were even used as the set for a stunt scene in For Your Eyes Only. Cortina feels like a classic Italian Alpine town, but draws a largely international crowd—many of whom come not necessarily (or even) to ski, but to shop in the fashionable boutiques on Corso Italia and soak up the winter sun.

Of course, the glamorous life comes with a glamorous price. But if you can swing it, with its 120km of slopes and the Dolomites as a backdrop, Cortina truly lets visitors embody la bella figura… and ski in style.

Getting there:
The nearest airports to Cortina d’Ampezzo are Venice Treviso and Venice Marco Polo. The Innsbruck airport in Austria can also be a convenient option. From the airport, a private shuttle or taxi can take you to Cortina; the train from Venice also can take you to Calalzo di Cadore with a transfer to Cortina by a connected bus service. Otherwise, there are bus services from Venice and Bologna straight to Cortina, though the journey is long. Courmayeur is a quintessential Alpine village that sits under the imposing ridges of Monte Bianco (Mont Blanc). Here you won’t find the soft landscapes of the Dolomites, but the wild, Alpine scenery of the Valle d’Aosta. Something else you won’t find? Crowds! Less international (or expensive) than Cortina, Courmayeur is also less, well, pretentious. Spend a relaxed weekend here to enjoy the slopes, Alpine food and inspiring views.

While Courmayeur has a lot to offer visitors, it has only 36km of predominately intermediate runs—so for more advanced skiers, it’s best for a short or weekend trip.

Getting there:
Take a shuttle transfer or a taxi from the Turin, Milan or Geneva airport to Courmayeur. Buses leave regularly from Turin and Milan to Courmayeur, but a train will take you only into the Aosta Valley, with a bus transfer necessary to finish the trip. Pila is great for little ones! Photo by SkiStar (Flickr)

Pila remains a relatively hidden gem among Italian ski resorts, and is not known much outside of Italy—but it offers quiet slopes and short lift lines, allowing beginners to get in a lot of practice! Pila has about 70km of slopes to offer all levels, but the little ones can try the Baby Pila, Baby Gorraz and Grimod slopes, or take lessons from one of the multiple ski schools open. The resort’s Miniclub caters to kids 12 and under, and children under seven get a free ski pass. Manageable, functional and relaxed, Pila is a fun, comfortable resort for both beginners and little ones!

Getting there:
The closest airport for Pila is the Turin airport, but as with Courmayeur, Geneva and Milan are reasonable options as well. All three offer private taxi or shuttle bus directly to Pila. Bus from the respective cities is more difficult and time-consuming, but still an option if traveling on a restricted budget. The bus company website provides quotes and a booking service online. Alagna is a part of Monterosa Ski, three valleys formed by several peaks—all 4,000 meters above sea level or more. Though the slopes are predominately intermediate, the real draw is off the trails: Alagna has quietly been attracting expert skiers with its powder, off-piste terrain and affordable heli-skiing (which is still allowed in Italy, unlike in neighboring countries). With Monte Bianco, the Matterhorn and Monte Rosa as your background, heli-skiing gives skiers access to nearly every inch of these spectacular mountains. Off-piste lovers will have no shortage of untouched powder fields, cliff drops and back-country routes, offering major challenges… and major fun!

Getting there:
Trains from Turin or Milan head to the nearest train station at Varallo Sesia. From there, you can take a bus or taxi into Alagna. Otherwise, Alagna Valsesia is well-connected to major cities in northern Italy, especially from Milano Lampugnano, Vercelli and of course Varallo Sesia and can be accessed by bus. Livigno’s slopes are great for snowboarders. Photo by Juozas Šalna

Livigno is often overlooked by non-Europeans in favor of fancy Cortina or traditional Courmeyeur, but the remote resort has a lot to offer—and for cheap: Duty-free Livigno is one of the most budget-friendly resorts in Italy, both on and off the slopes!

Livigno has 110km of slopes that range from beginner to black-diamond abilities. Its main attraction, though, is the Mottolino Snowpark, a terrain park with rails, half-pipes and professional-sized jumps. With a dedicated lift, Mottolino has areas for beginners to terrain park junkies. If the park isn’t your thing, Livigno’s wide slopes make great snowboarding runs for all levels. Boarders can feel lonely in some European resorts, but Livigno’s wide piste and terrain park ensure they won’t be alone in this laid-back town!

Getting there:
Unfortunately the transfer for Livigno from a nearby city is one of the longest in Italy, but the village’s remoteness means, of course, fewer crowds! The nearest airports are Milan and Bergamo, but Zurich in Switzerland is an option as well and all have easy shuttle transfers to the central train station. The nearest train station to Livigno is in Tirano, about 70km from Livigno, so a bus or taxi will have to complete the journey for you. During high season, local buses have direct service from Milan to Bormio with a follow-up connection from Bormio to Livigno.

On the slopes and off the slopes, there’s plenty of social life in Bormio. Photo by Jules Joseph

Bormio is a close companion to Livigno, both geographically and in terms of what it offers. Part of the Alta Valtellina Ski Area, Bormio has access to 112 individual pistes of all difficulty levels, so its slopes aren’t quite as many as Livigno—but its social scene more than makes up for it. Start your weekend early with “Stelvio sotto le stelle” (Stelvio under the stars): Every Thursday, Bormio lights up the Stelvio and Genziana slopes for after-hours skiing with entertainment and music. Then take the socializing from the slopes to the town for great après-ski drinks, parties and dancing. Looking for something a bit calmer? Take your pick of restaurants, relax in one of Bormio’s famous thermal baths or head to the cinema in the center of town. The thermal baths are life-savers after a day of skiing! Photoby Jules Joseph

Getting there:
There are easy, if long, private transfers from Bergamo and Milan airports to Bormio. You can take a train from Milan to Tirano with a short bus ride from Tirano to Bormio, or during ski season you can simply take the bus directly from the airport! With great skiing and great drinks it’s easy to have fun in Sauze! Photo by Alpes de Haute Provence (Flickr)

One of the biggest, most popular resorts of the Via Lattea (“Milky Way”) chain, Sauze has access to 400km of piste. The skiing in Sauze is sunny and laid-back, with primarily intermediate slopes… but the after-ski drinks are even better! Sauze has cleaned up  its wild party reputation of the past, but still offers an excellent après-ski with many choices of restaurants, bars or nightclubs.

Our recommendations: For dinner, head to the old town and try Del Falco. Choose a la carte or the skier’s menu three course meal, sure to help you recharge after a day on the slopes! And for drinks, go to Paddy McGinty’s, no matter what the time for a warm fire, good beer and lively atmosphere. Don’t want the night to end? Try Schuss or Banditos, two nightclubs open long after the bars close.

Getting there:
Turin is the nearest airport to Sauze d’Oulx, with an on-the-ground transfer of about an hour. From the airport the easiest, and often most cost-effective, way is simply by private transfer, but a bus can take you from the airport to the Turin train station to then take a train to the Oulx train station.

Best for… sure snow and budget travelers: Cervinia (Valle d’Aosta) One of the highest mountains in Italy, Cervinia is sure to have snow. Photo credit by Matteo Galli

Cervinia, at the base of the Matterhorn in the beautiful Aosta Valley, is one of the highest resorts in the Alps—ensuring that its slopes are nearly always covered in snow! At a maximum height of roughly 3,500 meters, and with its own glacier (the Matterhorn, which it shares with Switzerland), Cervinia is the first to get snow and the last to end the season. Plus, Cervinia was rated as one of the least expensive world-class resorts by The Post Office Resort Report for the second consecutive year in 2013, offering a top-of-the-line resort at a decent price. (In fact, just over the mountain from Cervinia is Zermatt; you can buy a ticket that gives you access to both resorts’ pistes, but Zermatt is extremely pricey—so staying on the Cervinia side will save you lots of money).

Getting there:
Transfers by private taxi or shuttle are available from Turin (the nearest airport), or from the airports at Milan or Geneva. Or, from each of those cities you can take a train to the nearest train station in Châtillon/Saint-Vincent, and from Châtillon, Turin and Milan buses run directly to Cervinia.

6 responses to “Where to Ski in Italy’s Alps”