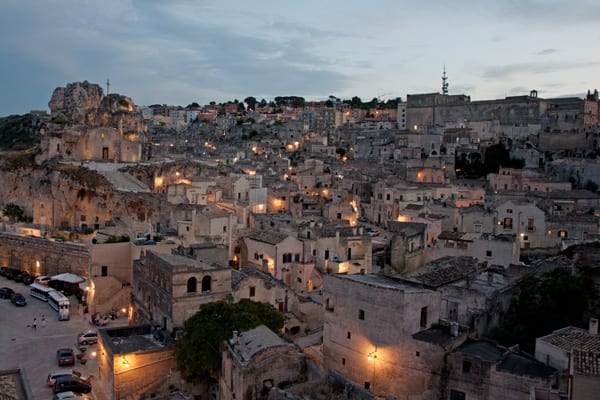 If you enjoy our travel guides, check out all the tours we offer to some of the most life-changing sights in Italy.

Famous for its sassi and stunning landscapes, Matera, located on the border of Basilicata and Puglia, is one of our favorite cities in Italy. It’s not only breathtaking, but fascinating: Its history goes back more than 30,000 years.

Did we mention that it’s much easier to than you think?

1. Matera’s famous sassi aren’t what you think they are The sassi of Matera

Many people think that Matera’s cave dwellings are called “sassi.” They’re not. The sassi (literally meaning “stones”) actually refer to the two neighborhoods of stone dwellings in the ancient town.

These dwellings, by the way, don’t always look like caves from the outside. (The caves you see in some pictures, like this one to the right, are Palaeolithic caves located across the ravine from Matera’s ancient center).

Instead, these dwellings, carved into the rock, look like homes piled one on top of the other. (Their interiors, though, often feel cave-like). It’s an ingenious, and space-saving, design: Step onto one of the narrow lanes between houses, and you’re actually standing on the roof of the house below. It’s also smart when it comes to sharing water, since water would be gathered on the plateau above the town and then come down so that the entire community could share it.

Two main quarters sprung up in Matera that were built this way… and these are the two sassi.

2. Aside from Petra, Jordan, Matera is the oldest continuously-inhabited settlement in history The Palaeolithic caves of Matera

We call the oldest period in human history the “Palaeolithic period,” a time when woolly mammoths roamed the earth and the last Ice Age was just winding down. And guess what? This is when people first settled in Matera. (We’re talking at around about 15,000 B.C.).

What makes Matera different from other Palaeolithic settlements, though, is that those inhabitants, and their ancestors, never left. Instead, they dug in—quite literally. In the Iron and Bronze Ages, newly-equipped with metal tools, settlers dug underground caverns, cisterns, and tombs in the landscape’s soft volcanic stone (called tufa). Famously, they also dug dwellings.

Those dwellings, and those people, remained throughout the later waves of rulers and empires, from Greeks to Romans to Byzantines. They (and their descendants) are still there today… even though some things are a little different.

3. Matera is where The Passion of the Christ was filmed

Because of Matera’s unearthly, ancient beauty, Mel Gibson chose it as the setting for his 2004 The Passion of the Christ. He’s not the first director to have set a Biblical film here: Pasolini’s The Gospel According to St. Matthew (1964), Beresford’s King David (1985), and Hardwicke’s The Nativity Story (2006) were all filmed here, as well. Today, Matera seems incredibly romantic. But it wasn’t always this way. Even now, you can imagine the difficulties of living in the town’s ancient sassi: Homes, stores and churches are connected via narrow paths or stairs, so forget driving from your house to the grocery store. For those used to modern conveniences, living in a stone dwelling in Matera would be challenging!

In the 19th and early 20th centuries, poverty also was rife in Matera, as for so much of southern Italy. People lived in one-room stone homes—or, yes, caves—without heat or plumbing, often with donkeys or other animals sharing the same space. (For the curious, the Casa Grotta di Vico Solitario shows what living in the 1950s would have been like). Malaria was rife. Conditions were so bad that, in 1952, the government of Italy passed a law forcing Matera’s dwellers out of their old quarters and into new, modern buildings. This “new Matera” still exists, up the hill from the ancient sassi, and it’s where the vast majority of Matera’s residents live today.

But in 1993, the area was declared a UNESCO World Heritage site. And as Matera has gotten more popular, people have started moving back into the sassi, restoring the stone homes and even opening them as luxury hotels. If Matera’s 19th- and early-20th century inhabitants could see their town now, they’d be astonished! The rupestrian church of Madonna di Idris in Matera

The churches of Matera, like the homes, are carved into stone. (These types of churches are called “rupestrian churches”). They date back to the Middle Ages; many have their interiors covered in vibrant frescoes. A damaged, but still vibrant, fresco in one of Matera’s rupestrian churches

Fascinating and eerie, these churches are also, unfortunately, in not-so-hot shape. While some restorations have taken place, the frescoes remain extremely delicate. And something that’s making them worse? Damage caused by tourists—particularly from touching them. (Frescoes are especially sensitive to moisture, so the natural oils from your skin damage the artwork). In one church after another, you can see where the frescoes have all but completely disappeared in the parts where people have grabbed onto them, such as around doorframes.

So please, go see the frescoes now, before they disappear. Contribute to their future restoration with your admission ticket price. And never, ever touch them. Coming to Matera? Expect to climb some stairs!

…or at least might not want to stay in its sassi. To get around, even just from your hotel to a church, you will be climbing stairs. Lots of them. And forget about handicap accessibility.

So bring your walking shoes, and prepare to work up a sweat… especially if you’re visiting in the summer. (Because this is Italy’s south, it can be relatively hot even through the end of September).

You have been warned!

7. Even though no train to Matera comes up on the Trenitalia website, you don’t need a car or bus to get there The train station in Bari with trains to Matera

This is something that even seasoned Italy travelers don’t realize: Matera is connected by train to Italy’s other towns!

Confusion comes in because if you go to the Trenitalia website and plug in, say, “Rome” to “Matera,” no solutions come up. But that’s not because there isn’t a train station here. (There is!). It’s because it’s not on the national rail system.

Instead, if you want to travel by train, the easiest way is to first get to Bari (which is connected to the national system, so you can look up times and prices on the Trenitalia site; it’s a 4-hour train ride from Rome to Bari). Then go to the regional train site, Ferrovie Appulo Lucane, putting in “Bari Centrale” as your starting point and “Matera Centrale” as your endpoint. A number of solutions pop up; the ride takes between 1 hour and 15 minutes and 1.5 hours, and the price is nominal (something like 2 euros). From the train station, it’s about a 15-minute walk to the sassi of Matera.

Note that the trains to Matera do not leave from the main part of the Bari Centrale station, but from a smaller station just outside the main one. When you walk outside onto the piazza outside the station, just look to your left, and you should see a building with the words “Ferrovie Appulo Lucane.” That’s where you want to go.

Because this is a smaller train service, on holidays and Sundays, it might not run. In that case, there’s a bus from Bari to Matera; just ask at the station.

There are also buses to Matera from Rome, Ancona, Florence, and Milan—but in general, we’ve found the train is the fastest, cheapest way to get there.