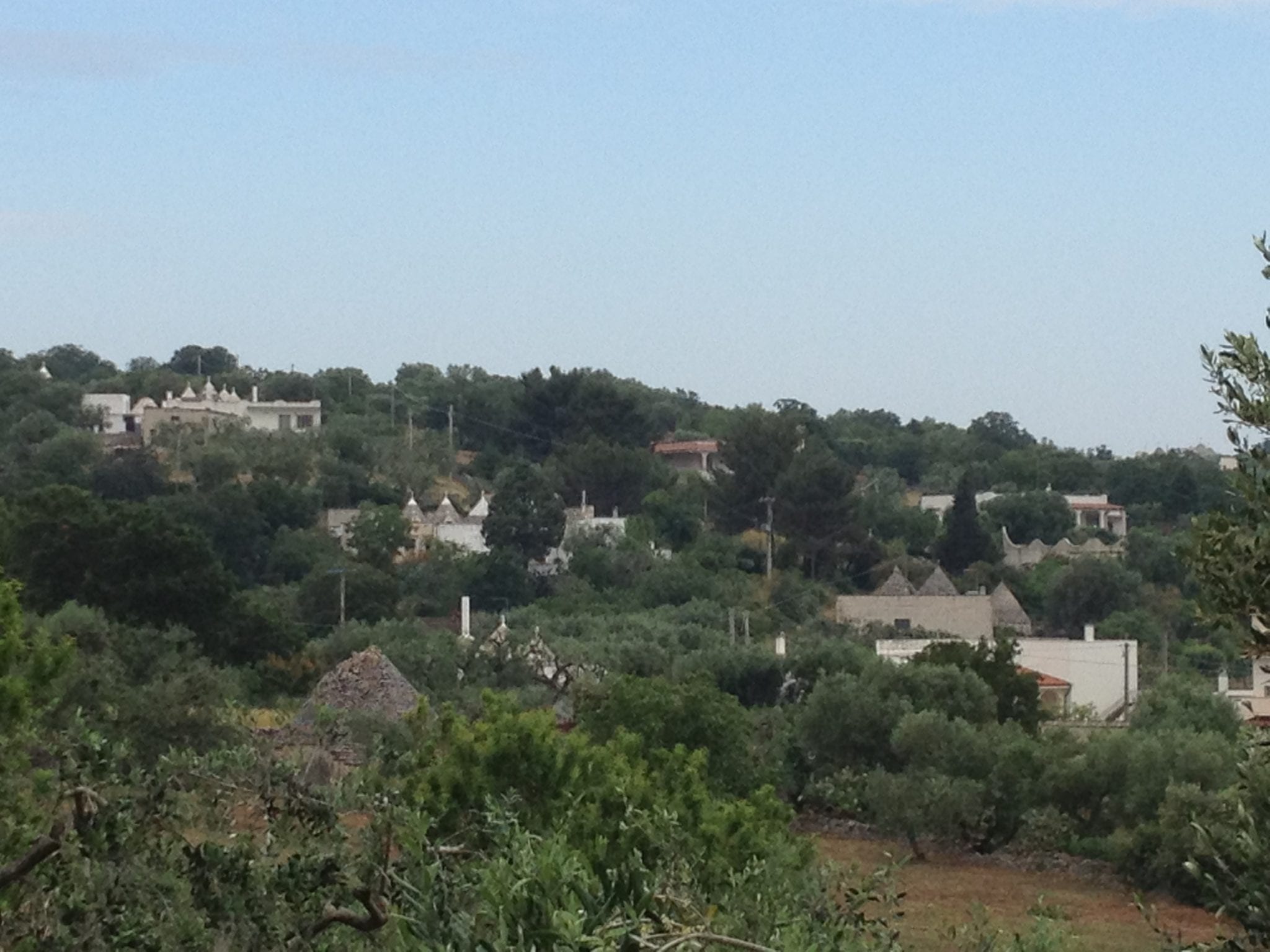 We have already shared photographs of some of our favorite things in Puglia. Here is another charming area in Puglia that we love – Itria Valley. Located in the heart of Puglia, this fertile valley, with trulli dotted all over the countryside, offers breath-taking views and is one of the most beautiful in Italy.

This expansive valley, though technically not resembling one as it is actually a karstic depression, stretches into three provinces in Puglia and is home to some remarkably charming towns.

Undoubtedly the most famous town in Itria Valley, Alberobello is famous for its trulli-lined streets. While trulli are scattered all over this valley, the largest concentration of trulli, over 1400, is found here. Since 1996, it has been designated as a UNESCO World Heritage Site and is extremely popular with tourists.

Divided into the Monti and Aja Piccola quarters, the Monti quarter with about 1000 trulli is the main attraction. It’s no surprise then that most of the trulli here are souvenir shops. Nonetheless, a walk through this picturesque quarter is an enchanting experience.

Siamese Trullo with a symbol on the roof

For instance, you will come across trulli with various symbols painted on the roof, the Trullo Sovrano a two-story trullo gives you an appreciation of the spaciousness of a trullo and the Siamese Trullo, with twin cones and two entrances, all make it surreal and fairy-tale like. 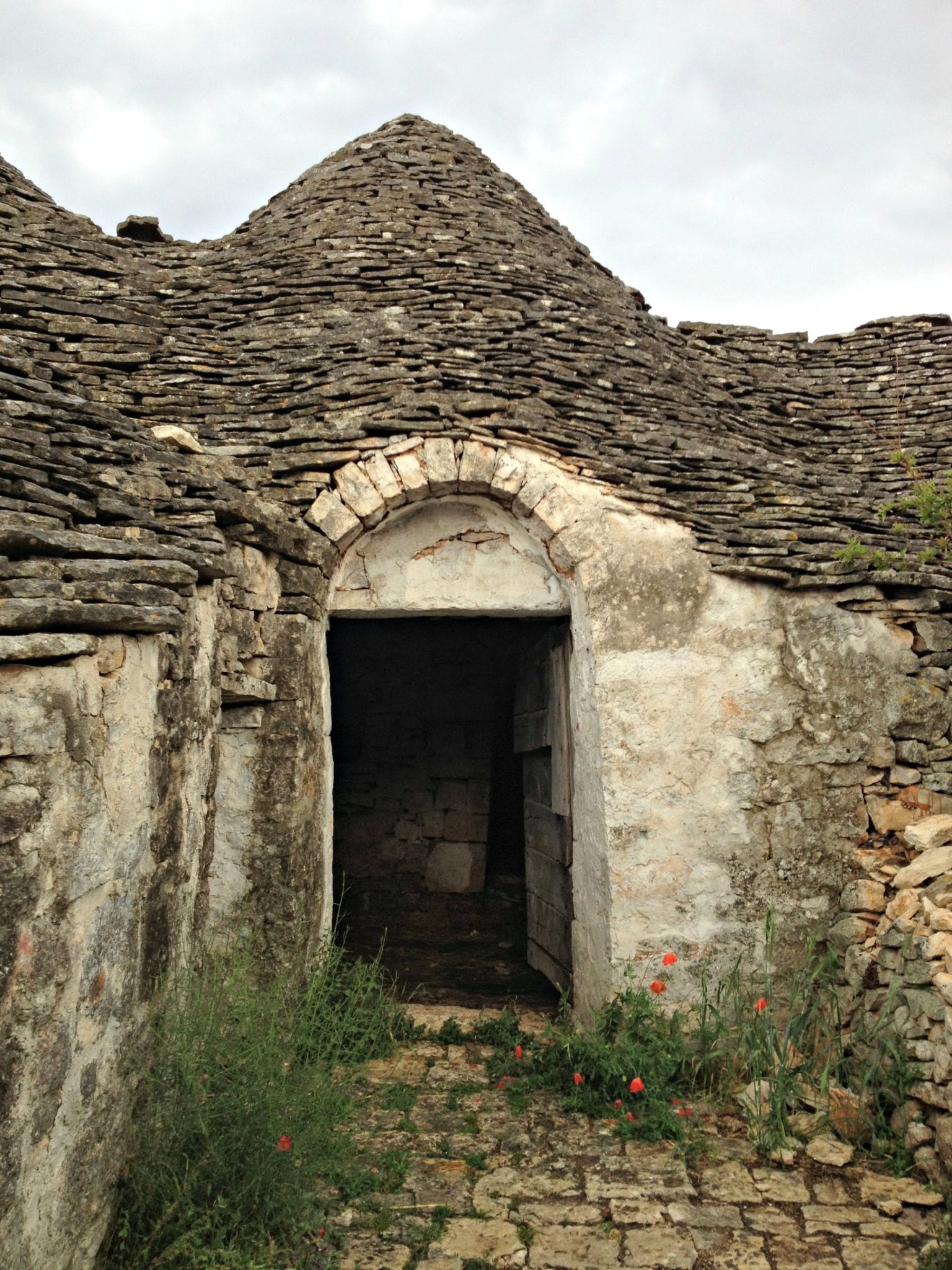 A trullo in its natural state

On the contrary, Aja Piccola with 400 trulli is off-the-beaten-path. Here you can still see trulli in their natural state, some even in disrepair, and residents going about with their life, offering a more authentic feel to this town.

Though only a stone’s throw away from its famous neighbor, Locorotondo is a humble town that is far from being considered touristy. Officially listed as one of the most beautiful towns in Italy (I Borghi piu Belli d’Italia), this quiet and tranquil town is also famous for its Locorotondo DOC white wines. 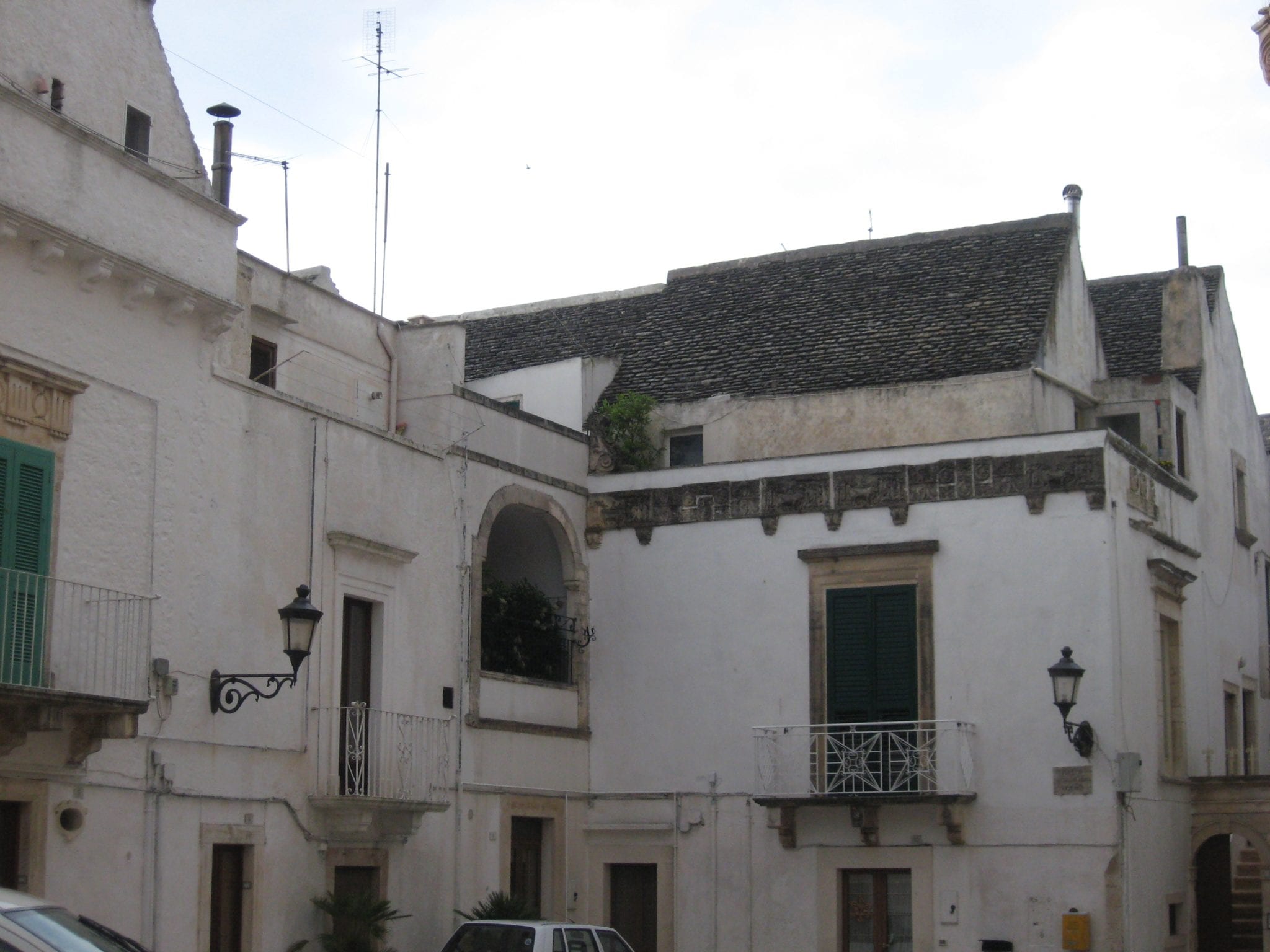 Situated on top of the hill, Locorotondo is circular in shape, thus getting its name from the combination of two Latin words “locus” (place) and “rotundus” (round). Though you won’t see trulli here, Locorotondo has its own unique building structure called the cummerse, with its unusual peaked gable roofs, more commonly found in Nordic architecture.

Heading further south from Locorotondo and only 12 kilometers (7.5 miles) from Alberobello is the town of Cisternino. Its origin dates back to the time of Greek settlers but the town was likely destroyed in 216 BC by Hannibal during his raids of Apulia. 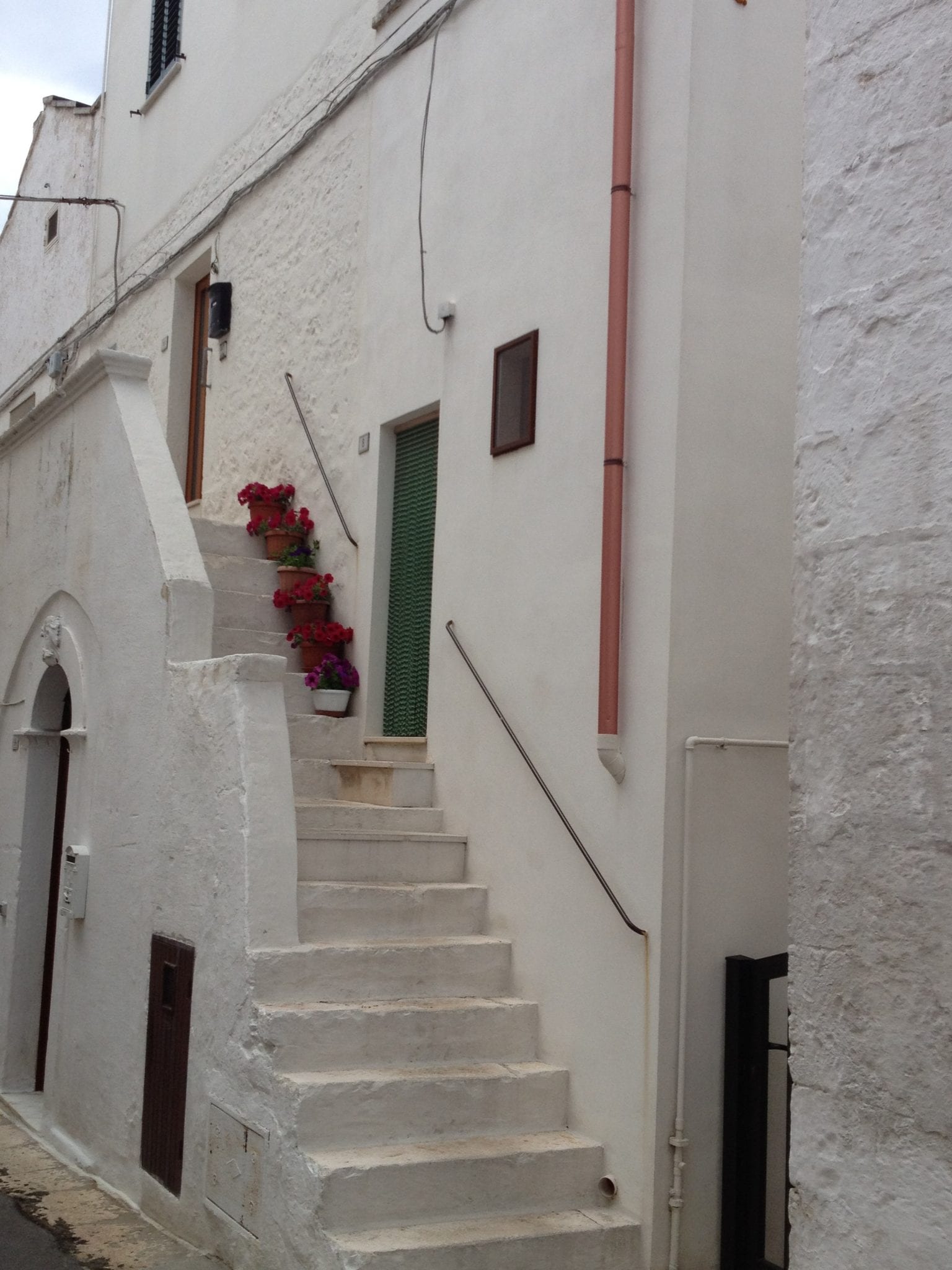 It was only in medieval times, when Basilian monks decided to build an Orthodox monastery here, that the town got a new lease of life.

Also listed as one of the most beautiful towns in Italy, visitors to Cisternino are greeted by its fascinating narrow alleys, whitewashed walls and unique external staircases decorated with colorful potted plants.

Most notable attractions here are the Piazza Vittorio Emanuele with the Clock Tower, the 12th century Romanesque Church of San Nicola of Patara and the Torre di Porta Grande, a Norman-Swabian tower that serves as a gateway to the town.

Lively and elegant, Martina Franca is one of the most representative towns of Baroque architecture in Puglia. The largest town in the Itria Valley, in terms of size and population, it was first settled by a group of refugees in the 10th century on San Martino mountain to escape the aggression of the Saracens.

Its name, Martina Franca, is derived in part from the word “franchegie” when in the 1300s Philip I of Anjou granted its citizens some exemptions. It is also in honor of St. Martin, its patron saint. 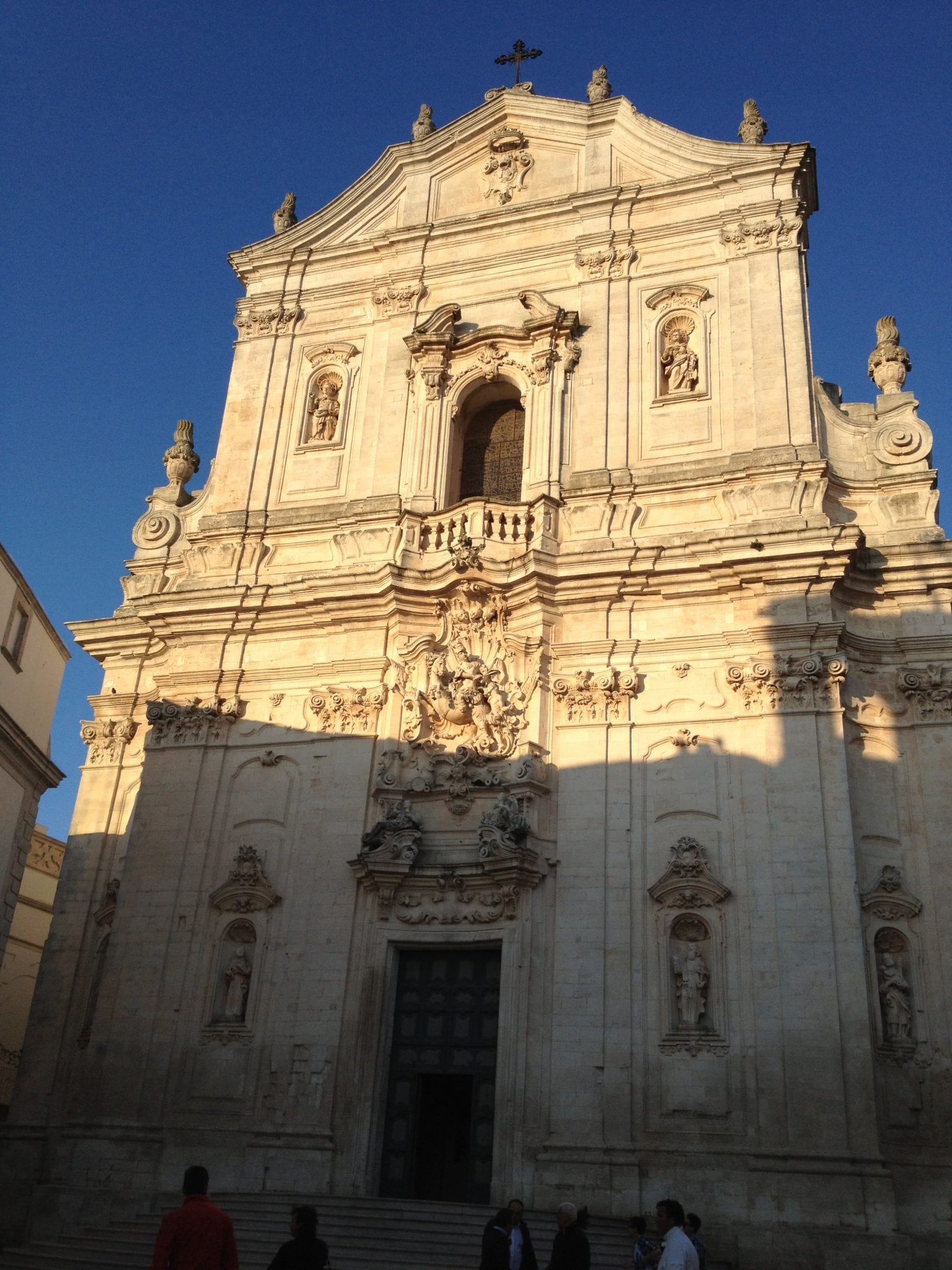 The charm of Martina Franca is surely its historic center. The town has its fair share of lovely piazze such as Piazza Roma where you find the remarkable Palazzo Ducale built in the 17th century and Piazza Plebiscito with the impressive Basilica di San Martino.

While in Martina Franca, don’t miss out on its famous culinary delight “Capocollo di Martina Franca”, a cured pork salami that is recognized by Slow Food Presidia. 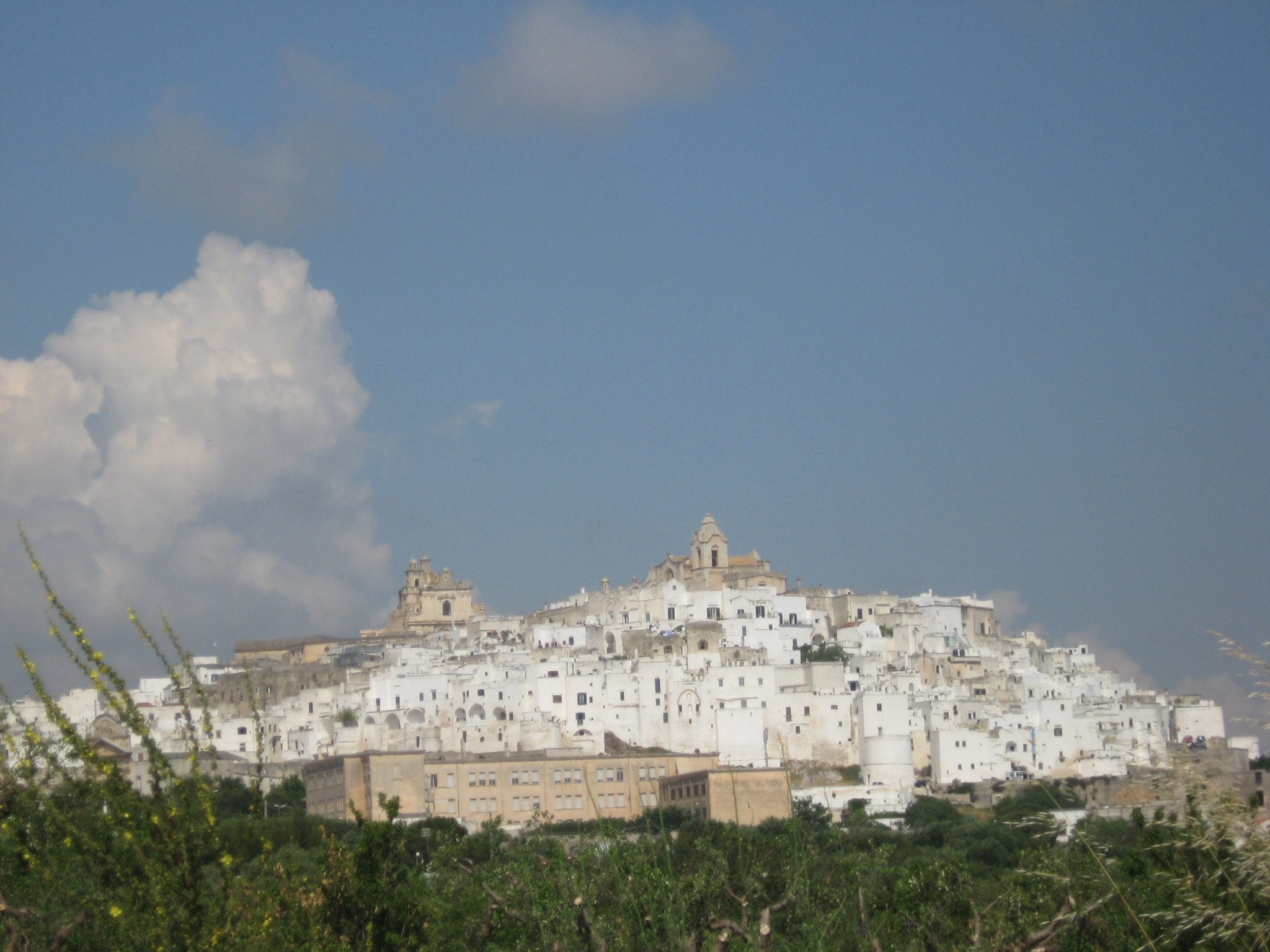 Famously known as the White City, the splendor of Ostuni is distinct even from the main highway. The stunning Gothic Cathedral sits majestically above the cluster of white houses surrounded by defensive walls. 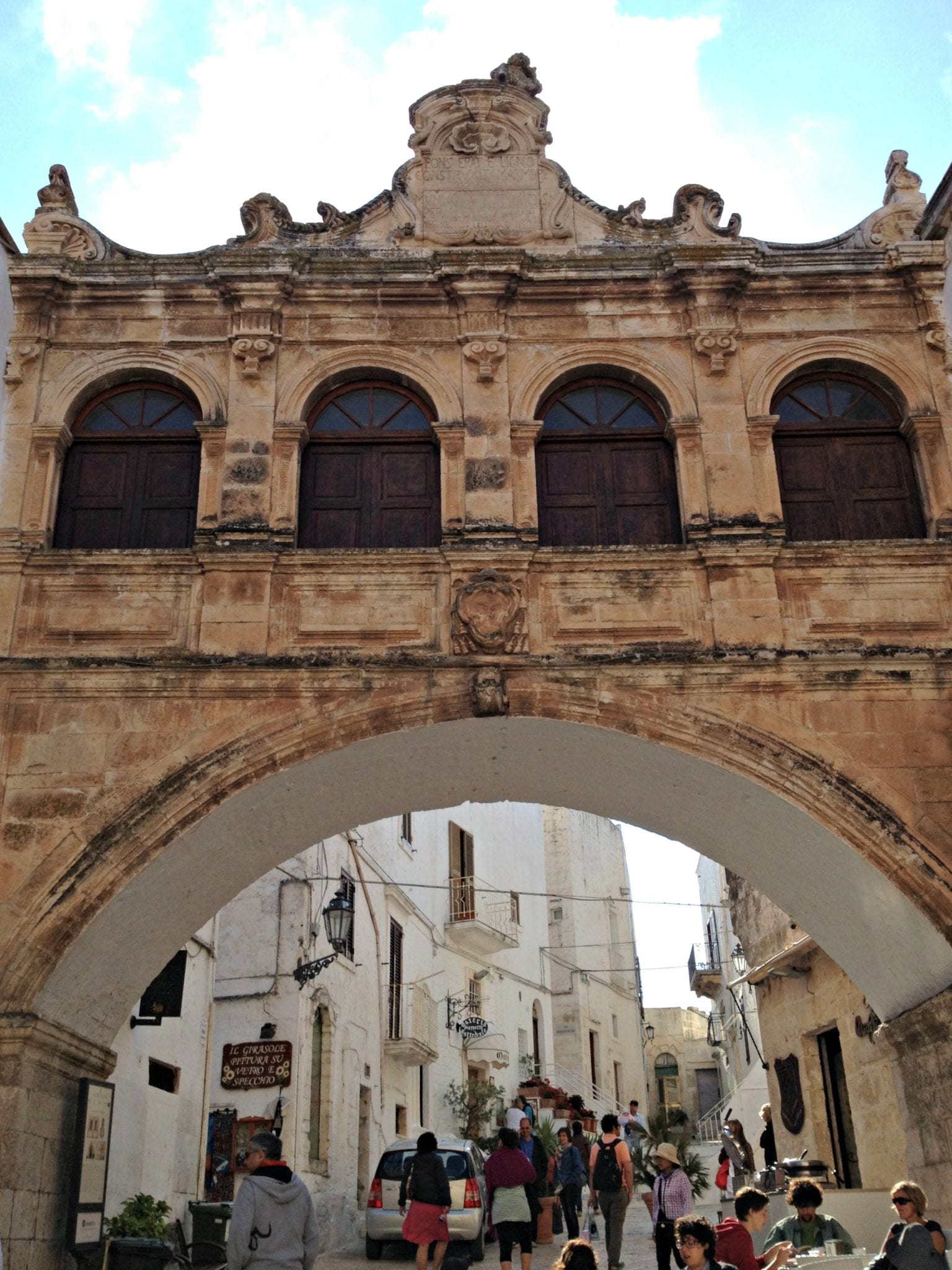 Bishop’s Palace with the onnecting bridge

Built in the 15th century, the Cathedral in Gothic style has an elegant façade with a splendid rose window and nearby is the Bishop’s Palace with the connecting bridge to the cloisters of the Cathedral.

Walking through its windy alleys, you can’t be blamed for thinking you are in Greece as you walk pass one white-washed house after another.

However, you would never imagine that in the 17th century, these white washed walls were for survival rather than aesthetic purposes. The lime wash, which was considered to have antiseptic properties, was used to keep the town safe from the plague and diseases.