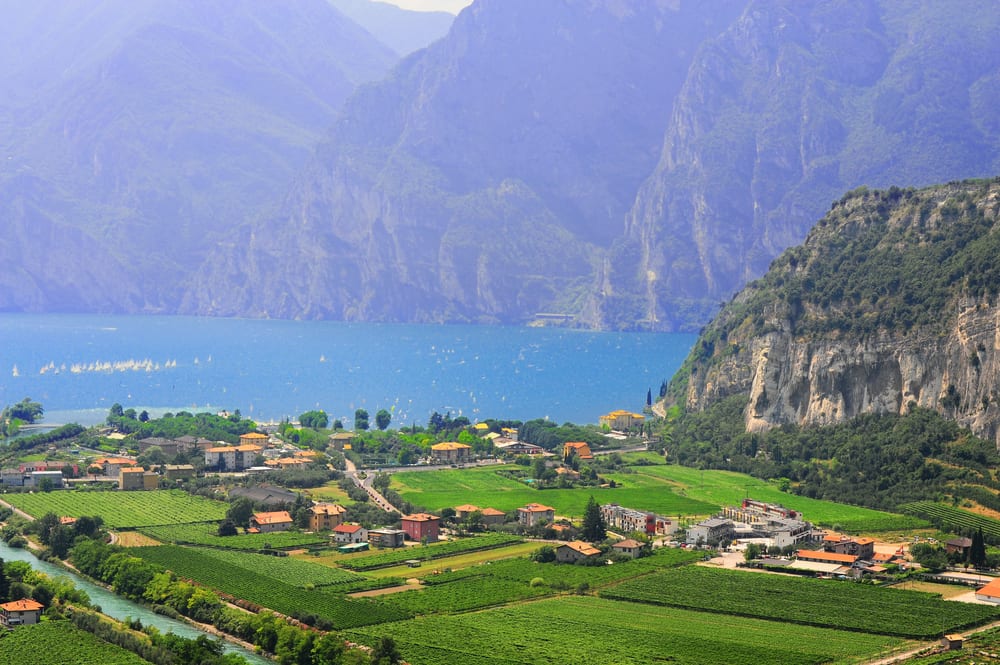 Lake Garda, Italy: Where to Stay, How to Get Around, and More

Lake Garda isn’t just one of the most beautiful lakes in Italy, boasting picturesque towns, a rich history, and striking beauty; it’s also Italy’s largest lake. Spread across three regions (Lombardy in the west, Veneto in the east and Trentino-Alto Adige in the north), Lake Garda’s sheer size means figuring out where to stay, and how to get around, can be a little confusing!We’re here to help. Read on for our insider’s tips and tricks to Lake Garda, including which towns to visit, how to use public transport to get around Lake Garda, and where to stay! While some towns such as Sirmione are especially renowned, Lake Garda also offers many off-the-beaten path gems, such as Torri del Benaco (Veneto region) and Nago-Torbole (Trentino-Alto Adige region).

Figuring out what to add to your itinerary? Here are a few of our favorite towns around Lake Garda.

One of the lake’s smaller towns, picturesque, medieval Torri del Benaco has a lovely harbor filled with colorful fishing boats, the imposing Castello Scaligero, and a lakeside promenade lined with restaurants.

Even in summer, this town remains relatively calm and makes for an idyllic place to relax. Boats in the harbor at Torri del Benaco. Photo by Amanda Ruggeri

Nago-Torbole actually includes two different towns—both strikingly different, yet fascinating. While Torbole lies along the lake, and is extremely popular with windsurfers and sailors, Nago, on the slopes of a mountain, boasts breathtaking views. Goethe was so impressed by Torbole that he described it as a “marvel of nature, an enchanting place.”

Nearby is the Monte Baldo park, known as the “Garden of Europe,” thanks to its variety of flora and fauna.

The mild climate makes Bardolino ideal for vineyards—so it’s no surprise that its hilly (and picturesque) landscape produces the famous Bardolino red wine. Wine aside, don’t miss the Romanesque church of San Severo, with its traces of original frescoes, and, nearby, the 9th-century church of San Zeno.

A popular destination that’s retained its small-town charm, Limone sul Garda, lying at the foot of the steep Dosso di Roveri mountain, is known for its lemon groves (although its name isn’t derived from lemons, but rather the Latin word limes, which means “border”). A must-visit is the 18th-century Castel lemon house; acquired by the city in 1995, it houses a museum and an educational center. Also worth a visit: The San Pietro church, with beautiful 13th- and 14th-century frescoes.

The harbor at Salo. Photo by Amanda Ruggeri

Salò, located on the foot of the San Bartolomeo mountain, is the largest city on the western part of the lake. And its lakeside promenade is the lake’s longest. Don’t miss the Palazzo of the Magnifica Patria, built in 1524 and  rebuilt after the 1901 earthquake, and the Cathedral, which was commissioned in the 15th century. With Monte Baldo as its backdrop, Malcesine is stunning – and impressive. Most visitors come here for the striking Castello Scaligero and Palazzo dei Capitani, but many visitors also come to take the cable car to Monte Baldo for breathtaking, 360-degree views of Lake Garda. Famous (and touristy) Sirmione sits on a peninsula stretching into the lake. It’s also home to the Grotte di Catullo (the ruins of a vast Roman villa), the imposing Scaligero Castle, and its thermal baths. Keep in mind that in summer, Sirmione swarms with visitors; to best enjoy this charming town, try to visit in the off-season.

Getting to (and around) Lake Garda

Lake Garda is situated near several major airports, making it easily accessible. Verona-Villafranca airport, the closest, is only 9 miles (15km) away, while Brescia-Montichiari is 18 miles (30km). Another option is flying into Milan (both Linate and Malpensa airports), about 60 miles (100km) away. From the airports, you can take a car, train, or bus to Lake Garda’s towns (read on for more information about public transport at Lake Garda!). Desenzano, is only 20 minutes by train from Veronoa. Photo by RicciSpeziari (Wikicommons)

Read More: How to Travel Italy by Train

If you’re traveling to the eastern side of Lake Garda, you can take buses from Verona to Riva del Garda, including stops in Lasize, Bardolino, Garda, and Torre del Benaco, among other towns. The full bus schedule is here.

If you are going to the western side, your best bet is to take the train from Verona to Desenzano; from there, buses connect Desenzano with towns all the way to Riva del Garda, in the north. From Desenzano’s train station, you can also take the bus to Sirmione, which takes about 30 minutes. Note: Buses tend to be more frequent in the summer, which is the region’s high season. By ferry
Another convenient mode of transport is the ferry. Lake Garda’s options range from standard to fast ferries; there are also ferry services for cars between Maderno and Torri del Benaco, and in summer, also between Limone and Malcesine. The timetables can be downloaded here for the various times of the year, and you can find the details for ferry prices here.

Where to stay in Lake Garda

While there are plenty of accommodation options around Lake Garda, we recommend staying in an agriturismo, where you can combine having an “authentic” experience of the area with enjoying the beautiful outdoors. (Here’s everything you need to know about staying in an agriturismo in Italy!). This website has a listing of farmhouses offering a wide range of facilities.

Another popular option is camping. These are not your average campsites!  Many boast excellent facilities, such as swimming pools, kids’ clubs and even an on-site restaurant. There are campsites all around the lake; at this website, you can search for them by town.

21 responses to “Lake Garda, Italy: Where to Stay, How to Get Around, and More”