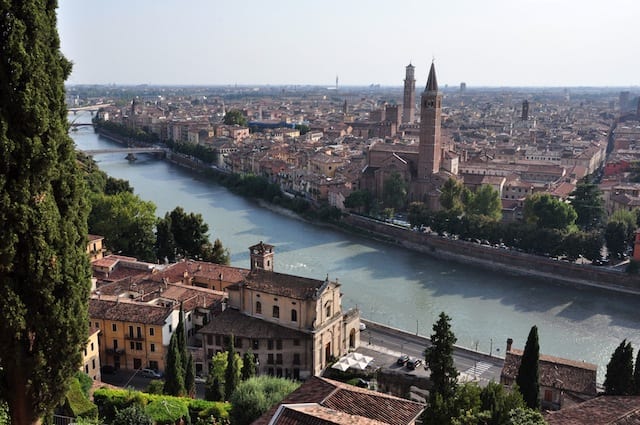 Although it’s most famous as the setting for Shakespeare’s Romeo and Juliet, Verona has much more to offer than its connections to the star-crossed lovers! In fact, there’s little evidence that anything like the Romeo and Juliet story actually took place here… but it is indisputable that you won’t be short of sights in this beautiful city, even if you ignore Juliet’s “balcony” and “tomb.” (The city’s rich culture and history, in fact, even have landed it on the World Heritage list!).

Northern Italy is full of beautiful towns and UNESCO World Heritage sites,  and Verona is definitely on the top of the list of places to visit in Northern Italy. Located just a half hour away from Venice by train, it makes an excellent day trip!

Still not convinced? Here are 7 of our favorite sights in Verona. By day, Piazza delle Erbe is home to a market (if one that sells mostly souvenirs and trinkets); in the evening, it fills with locals and tourists sipping Campari and enjoying aperitivi at the outdoor cafes. But no matter when you’re passing through the square, look around you! With its Renaissance-era palaces and lovely central fountain, this might just be the prettiest piazza in all of Italy. Built in the 1st century A.D., this amphitheater was Verona’s answer to Rome’s Colosseum (although actually, it predates the Colosseum by almost 50 years!). Still remarkably well preserved, today it’s home to Verona’s summer opera festival. (Check out our earlier post on attending opera in the arena of Verona!). The Basilica of San Zeno, a sight not to be missed in Verona

This beautiful church dates back to the 4th century, although most of the current building was constructed between the 10th and 12th centuries. Other churches in Verona drew much of their inspiration from its early Romanesque style. Don’t miss the bronze door, with 48 elaborately-carved panels of scenes from the Bible, dating back to the 11th century. The battlements of Castelvecchio, a medieval fortress and art museum in Verona

With seven towers, a castle keep, and four separate buildings, Verona’s 14th-century fortress, Castelvecchio, is the city’s most imposing building. Today, it’s also home to a museum of art, sculpture, coins, and other artifacts, with a collection of paintings that includes pieces by northern Italian masters Mantegna, Bellini and Pisanello. This ancient Roman gate, which once marked the southern entrance into Verona, is a great—and beautiful—example of the way in which ancient ruins are layered into the modern city of Verona. The Duomo of Verona

Verona’s main cathedral, or Duomo, is stunning. But don’t just see it from the outside: The interior of this 12th-century church is incredibly elaborate and filled with artistic gems, including a painting by the Italian master Titian. The tombs of the Scaligeri family in Verona

Tombs don’t get much more elaborate than these! Just around the corner from Piazza delle Erbe, these five Gothic funerary monuments, considered some of the best examples of Gothic art in Itay, are hard to miss. They belong to members of the Scaligeri, who ruled Verona in the 13th and 14th centuries. Make sure you duck into the tiny, lovely church of Santa Maria Antica behind them.

35 responses to “7 Top Attractions in Verona, Italy… Beyond Romeo and Juliet”