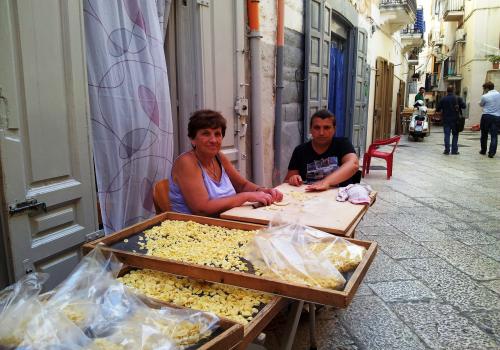 All About Bari, the Capital of Puglia, Italy

Bari, Italy is the capital of Puglia, the region in the heel of the Italian “boot.” It’s also a major transport hub not only for Puglia, but for ferries and cruise ships leaving the port for other destinations in the Mediterranean.

But Bari’s much more than a capital and transportation hub! It’s also an off-the-beaten-path destination boasting spectacular gems, from top-notch cuisine to historic castles.

And getting to Bari is easier than you might think. You can fly into Bari’s international airport, but if you’re already in Italy, you might want to take the high-speed train. From Rome, you can get to Bari Centrale in about four hours; since the train station in Bari is only a short walk to the historic center, it’s an especially convenient way to go. (Don’t miss out on our post on how to travel Italy by train!).

Headed to Bari? Here are seven things you won’t want to miss! This imposing structure, originally built by the Norman King Ruggero II in the 12th century, was rebuilt by Frederick II in 1233. He added two of the original Norman towers, still visible today. In the 16th century, during the height of Bari’s glory, Castello Svevo served as a Renaissance residence for Isabella of Aragon and her daughter Bona Sforza—and became a playground for the artists, writers and powerful dignitaries that the two would host. You can still wander through the castle’s enchanting inner courtyard, monumental staircase and small museum today. While less well-known than Basilica di San Nicola, the Cathedral of San Sabino is Bari’s main church. Originally built in the Byzantine style in the 11th century, it was destroyed in 1156 and rebuilt again in 1170; its Romanesque style makes it one of the best examples of the period’s architecture in all of Puglia.

The church was named in honor of Bishop San Sabino, whose relics are still preserved in the crypt  today. Make sure to take a close look at the facade: It features fascinating decorations with grotesque monsters and imaginary creatures, along with a gorgeous rose window. Commissioned in 1089 to house the stolen relics of St. Nicholas of Myra, this stunning, white-limestone church might just be the symbol of Bari. Its crypt today still contains the remains of St. Nicholas, the patron saint of sailors, travelers and children (yep, he’s the original Santa Claus), making it an important destination for pilgrims. And if you’re visiting Bari during the first week and a half of May, you’re in for a treat: Bari honors St. Nicholas with processions, fireworks, and other celebrations, many, of course, taking place around the basilica. In Bari Vecchia, you might come across residents making orecchiette right on the street!

The “old town” of Bari, home to some of the most important attractions such as Basilica San Nicola and the Cathedral, is a must-see in itself! With its narrow, winding alleyways, Bari Vecchia feels like a step back in time. In fact, don’t be surprised if you come across women expertly making orecchiette, like their mothers and grandmothers before them, right on the street. (Don’t believe us? Just check out the video below!).

Don’t miss Piazza del Ferrarese, which is lined with bars and cafes, and the nearby Piazza Mercantile, once the political center of the old town. It’s the perfect spot for a morning walk—or do as the Barese do, and go for an evening passeggiata here instead. While Bari Vecchia takes you back to the past, the urban design of Murattiano, with its wide, grid-like streets built in the 19th and early 20th centuries, is a taste of an altogether different era! Divided from Bari Vecchia by the elegant, tree-line Corso Vittorio Emanuele, this area—commissioned under the rule of Murat, the king of Naples—is an architectural delight. (Today, it’s also a bustling shopping area!).

Check out the Teatro Petruzzelli, which opened in 1903; it’s the fourth-largest theater in Italy. And don’t miss Fizzarotti Palace, a eclectic building in a neo-Gothic Venetian style, commissioned by banker Emmanuel Fizzarotti in the late 19th century. Burrata, the creamy, mouth-watering cousin to mozzarella, is just one Barese specialty

Puglia boasts some of the country’s best foods (just check out our list of our favorite foods in Puglia to make your mouth water!). And, of course, you can taste some of the best in Bari. At the top of our list? Burrata. This delicacy, filled with mozzarella curds and cream, is absolutely delicious! And as it’s best when eaten fresh, Puglia is the place to try it.

Also look out for orecchiete con cima di rape (orecchiete pasta with brocolli rabe), a local dish that’s simple, but bursts with flavor. And for those who prefer something heartier, you can’t go wrong with tiella, a baked dish made of rice, potatoes, and mussels. After all that food, there’s no better way to end an evening with some dancing! Pizzica is a traditional folk dance from Salento, meant to express a courtship’s love and passion.

3 responses to “All About Bari, the Capital of Puglia, Italy”