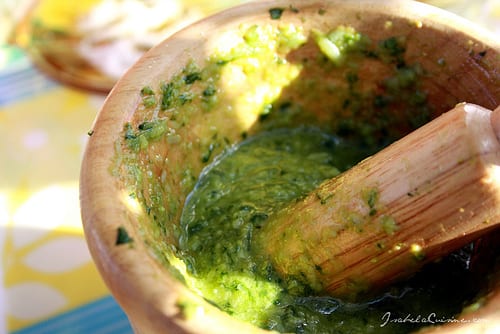 What to Know about Pesto Genovese & the Best Pesto Recipe Around How it should be: pesto alla genovese on trofie pasta (photo by lucadea on Flickr)

Pesto pasta is one of the most popular dishes in Liguria, Italy—and it’s one that’s found lots of popularity worldwide! But in many cases, what you find when you order a pesto dish abroad just isn’t the same as what you’d find in Liguria. Here’s what “pesto” really means, what pesto alla genovese should be… and how to make it at home!

First of all, in Italy, “pesto” doesn’t necessarily refer just to that green, basil-filled paste we’ve come to think of. Instead, it can refer to almost any mix of herbs that are pounded together and put over a pasta. In Sicily, for example, pesto rosso uses tomato and almonds.

No matter what herbs go into it, pesto has a long history. Ancient Romans pounded together garlic, cheese, and herbs, a paste they called moretum. In the Middle Ages, Italians mashed walnuts with garlic, a mix that was especially popular among Liguria’s seafaring culture: The paste was thought to help ward off sickness during long sea voyages.

Still, the most famous pesto—and the one we tend to think of when we hear the word—is pesto alla genovese. The first recipe for this kind of pesto turned up in 1863 in the first major book of Ligurian cuisine, so it’s relatively new. But it already has a very carefully-defended tradition!

Want to make pesto the Genovese way? Then you need basil from Genoa! (But any fresh basil will taste great, too).

In fact, pesto alla genovese is D.O.P.-protected, meaning that in Italy and Europe, only sauces made in this precise way, and with these ingredients, can even call themselves pesto genovese. The ingredients must include D.O.P. basil from Genoa, for example, because the soil and climate in that particular area gives the basil a flavor that’s impossible to replicate elsewhere.

Want to make it at home? Here’s the official recipe that won the Genoa Pesto World Championship (yes, that’s a real thing!) in 2012. Of course, depending on where you’re making your pesto, you might not be able to get all of the very-specific ingredients (like that fresh basil grown outside Genoa). But get as close as possible, and you’ll be in good shape! The ingredients you need for pesto alla genovese

First off, make sure you have a marble mortar and wooden pestle! Well, okay, you don’t have to. But if you’re doing it the “authentic” way, that’s how pesto is traditionally made.

Crushing the pesto with a mortar and pestle (photo by Isabela.C on Flickr)

Secondly, keep in mind that you want to do the following steps quickly. Why? Taking too long can oxidize the oil and the ingredients… so work fast to make everything taste as fresh as possible!

First, rinse the basil leaves with cold water and leave them to dry, without rubbing them. Crush the garlic clove and pine nuts in the mortar until smooth; add some of the salt and basil, then pound it some more. (According to the recipe, you should use “a light circular movement of the pestle against the sides). Keep going until the basil drips with a bright-green liquid.

Add the cheese and the oil to blend.

Just remember: If you’re doing it like the Ligurians, this pesto never goes over chicken. Instead, it’s mixed with pasta—most traditionally, Genoa’s mandilli de sæa, trofie,  trenette, although at home, easier-to-find penne or fusilli will also do the trick. (You want to use a small, ridged pasta rather than a long, flat, smooth one, so it “grabs on” to the pesto better). While you’re grinding the pesto, boil that pasta in salt water until it’s al dente; keep a little of the water and toss it with the pasta and pesto for a dish that’s the perfect consistency… and delicious!