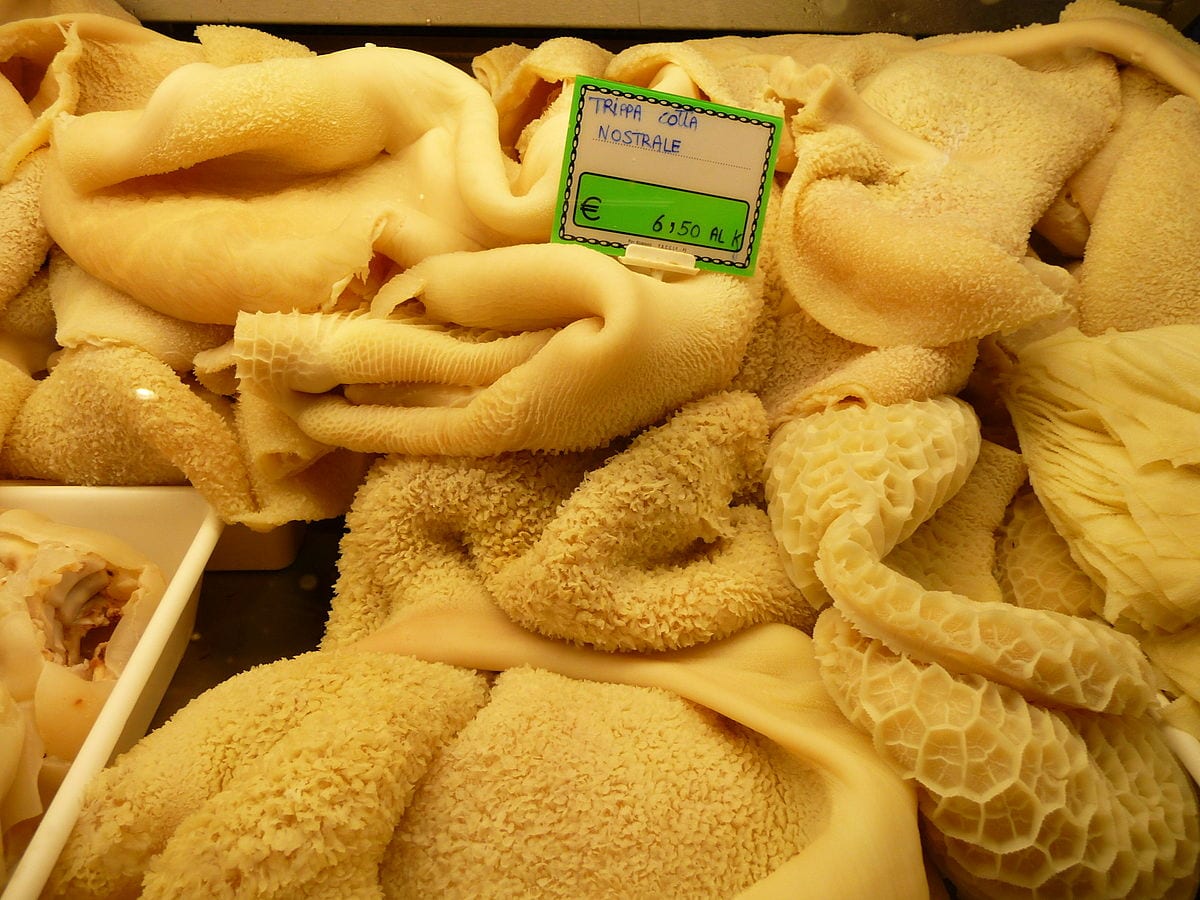 Italians Eat What? A Guide to Some of Italy’s Most Esoteric Cuisine

Everybody knows Italian food: mozzarella cheese, pastas, world-class wine…right? Sort of. Italian cuisine actually goes far beyond those staples. Not only is it highly regional, as discussed we discussed in this post, the Italians also have a much wider palate than many American and Europeans. In fact, some of Italy’s most esoteric cuisine might seem downright strange to you.

Most of the “stranger” Italian dishes were created out of necessity. By using the entire animal or buying the off-cuts, Italians throughout the centuries could save money and still eat a nutritious meal. They still refer to this type of cooking as cucina povera, or “poor cooking”. The recipes are local and come from what was readily available throughout the country’s history. Check out some of the Italy’s most esoteric cuisine below. Which dishes would you be willing to try?

(If you’re interested in learning more about cucina povera check out our Florence food tour. )

Italy’s consumption of equine meat comes from its agricultural past, when the animals were used to work the fields and food was scarce. Horses and donkeys were seen as protein like anything else, and the people ate them out of necessity. The trend really grew in the 1800s when doctors prescribed equine meat to combat anemia, as the meat is high in iron and low in fat and cholesterol. Today, the popularity of horse and donkey meat is on the decline as Italians are beginning to think of horses more as domesticated animals. That said, Italy still has the highest consumption of equine meat in all of Europe and there are still plenty of delicious dishes to be found throughout Italy. Try the donkey ragù in Verona or the stracotto d’asino, a dish made with donkey meat slow cooked for hours and hours. Horse can be tried in a similar dish, usually served with polenta, or sliced as a cured meat.

Pork in all – and we mean all – of its forms 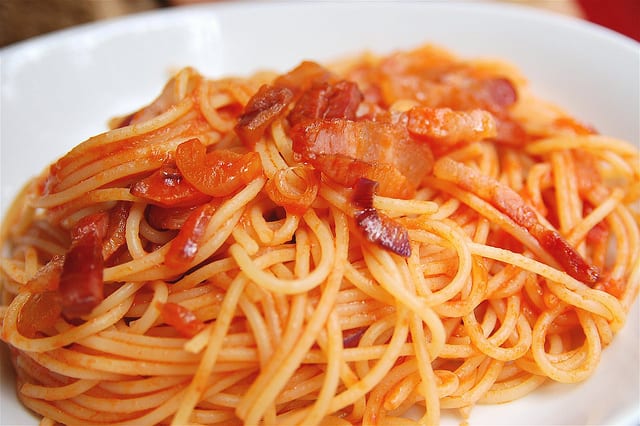 Amatriciana Romana, with sprinklings of guanciale, or pork cheek, on top. Photo by Judy Witts

It’s no secret that Italians are big pork eaters, but pork actually goes into a lot of Italy’s most esoteric cuisine. In fact, some of the most famous regional dishes use some of the strangest cuts of pork. For example, Roman amatriciana pasta with guanciale, or pork cheek, the cassouela from Lombardy which uses pork snout, ears and feet. The famous (and famously difficult to pronounce) ‘ndocca ‘ndocca from Abruzzo – a region with cold winter temperatures and a history of rural life – simply seasons the feet, ears, tail, snout, and pork rinds with bay leaves, garlic, rosemary and chili peppers. If this is making you a bit squeamish, remember that you’ve probably eaten a lot of these things before in the form of salumi, or cured pork. Popular salumi’s include coppa di testa or soppressata, both made of pork head.

Tripe and other cow organs

Tripe can be pretty rubbery when it’s fresh – nothing that a good long stewing won’t help.

Of Italy’s most esoteric cuisine, perhaps the most foreign to some are tripe and organs. We’re not talking about your grandmother’s famous liver dish – the Italians go much farther than that. Regional dishes exist throughout all of Italy featuring different cow organs. Try a classic veal tongue, boiled, sliced and seasoned in Liguria or Piemonte. Or try the ever-popular panino con la milza (pani câ meusa in the local dialect) from Palermo, Sicily. This is a sandwich filled with veal spleen and lung that’s been boiled and fried. You can ask for cheese added if you’d like.

Tripe is the white, rubbery lining of the cow’s stomach. It’s cooked in various ways, but most often put together as a hearty soup. Called trippa in Italian, this dish is typical of many Italian regions, but especially in Lombardy, Lazio and Tuscany. One particular Tuscan tripe dish is called Lampredotto, with Florentine tripe eaten in sandwiches with green sauce or hot sauce (if you like the sound of that, check out our post about some of the best panino shops in Florence). 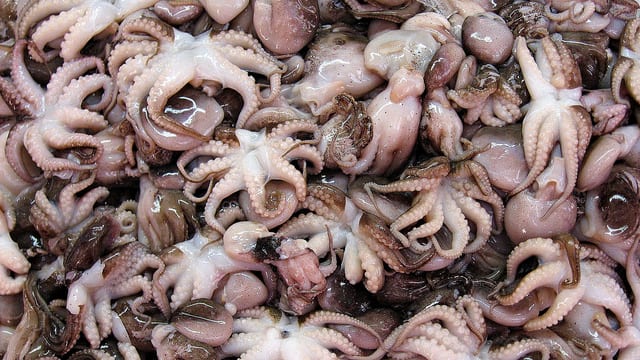 The more curled the tentacles are, the more tender the octopus meat! Photo by 16:9clue (flickr)

Anyone who has had sushi is used to eating raw seafood, but Japan isn’t the only country with a culture of raw fish in its cuisine. Down south in Puglia the consumption of local seafood is so widespread, that the government enforces no-fishing periods to help repopulate the waters. For the Pugliese, the best way to eat all that fresh seafood is to eat it right away!

The most popular raw seafood dish, and easily one of Italy’s most esoteric foods, is the sea urchin. Inside that hard, spiny exterior is a delicious orange organ that is actually…wait for it…the sea urchin’s gonads. Second only to the sea urchin is raw octopus. Considered a specialty, the fishermen follow a precise procedure to clean the octopus. They remove its internal organs, pound it against a rock to tenderize it and stir it for an hour to cause the tentacles to curl, relaxing the nerves and making the octopus meat extra tender. This specific dish is called pulpe rizz, or octopus curl.

Despite what the list implies, Italians eat many, many vegetables and they’re quite fanciful in their preparation. Some of the odder vegetable choices include cicoria, or dandelion leaves. A weed in most countries, Italians cook it in any which way to make a unique side dish. Another favorite is pumpkin flowers, or fiori di zucca. Italians use these pumpkin or zucchini flowers to make a flavorful risotto or fry them up with anchovies and mozzarella cheese.

Have you had a memorable or memorably esoteric meal in Italy? Tell us about it in the comments!

2 responses to “Italians Eat What? A Guide to Some of Italy’s Most Esoteric Cuisine”