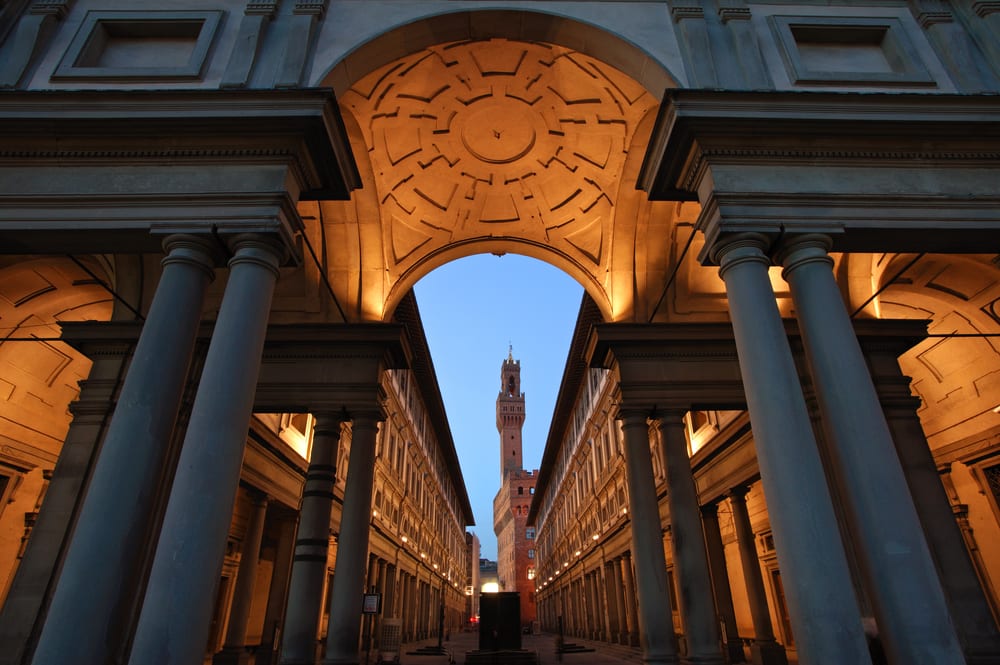 The Uffizi Gallery (Galleria degli Uffizi) is the best single museum in the world to see Renaissance paintings. Housed in a cavernous building designed by Giorgio Vassari, it houses a collection that covers some 400 years and innumerable artists including many of Italy’s most famous masters like Giotto, Cimabue, Duccio, Domenico Veneziano, Filippo Lippi, Caravaggio, Paolo Ucello, Sandro Boticelli, and of course, Leonardo, Donatello, Michelangelo, and Raphael.

It would take days to see the entire collection (which also includes sculptures and, believe it or not, over 100,000 drawings and prints) but most visitors just come for the big names, and to the soak up the beautiful interiors in which their works are displayed. 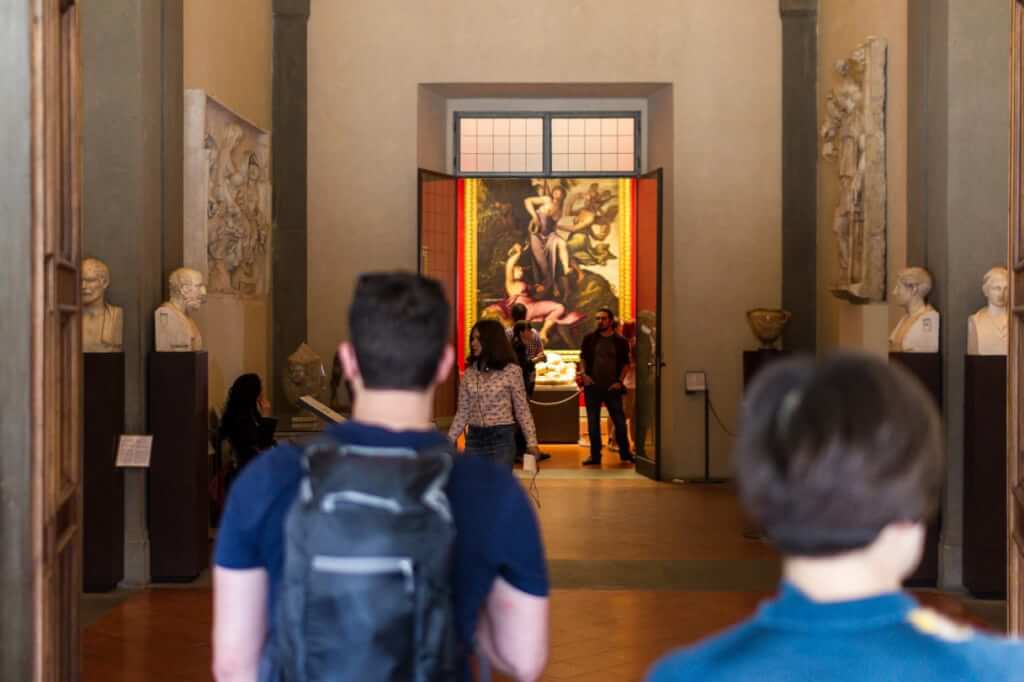 What to See at the Uffizi Gallery

In 1599 the great architect, painter, and sometimes-art-historian Giorgio Vasari was commissioned by the Medici family (who basically made the rules in Florence for the better part of 400 years) to design an office building for the Florence judiciary. What he came up with is probably one of the grandest and most beautiful buildings ever constructed for government bureaucrats.

It wasn’t until Cosimo I de Medici died in 1574 that the top floor became a display area for some of the family’s sizable art collection. Over the years, the art slowly replaced the bureaucrats until the 18th century when the Medici dynasty died out, and only a visionary piece of political manuevering by the last Medici heiress, Anna Maria Luisa, ensured that the entire collection stayed in the museum.

Her famous Patto di famiglia basically stated that when she died her inherited fortune – i.e. the entire accumulated estate of the Medici family – would not go to her children, but instead be bequeathed to the Tuscan state on the condition that it would never leave Florence. Thus the Uffizi became one of the world’s first art museums officially opening to the public in 1765.

Ever wondered what painting was like before the Renaissance? In word: flat. The expressions are flat, the poses are flat, and even the backgrounds are flat. After all, artists hadn’t figured out perspective yet. If you take a look at the works of Cimabue and Duccio, this flatness is still present but on the way out. Then contrast them with Giotto’s “Majesty” and you’ll instantly experience a frisson of innovation.

At the end of the 13th century and beginning of the 14th artists started adding depth and life to their paintings, making the figures and themes more human instead of strictly divine. Giotto’s “Majesty” brings out the body of the Madonna in ways that were unthinkable 100 years before.

In the early Renaissance, humans were brought even more to the fore and paintings became more and more realistic as the works of ancient thinkers were rediscovered and used to power the arts in new and exciting directions.

Paolo Ucello’s early masterclass in the use of mathematical perspective (newly discovered at the time) is called the Battle of San Romano. Meanwhile Domenico Veneziano abandoned the flat, divine light that was a staple of Medival paintings in favor of nuanced natural light which illuminates the subjects of Santa Lucia de’ Magnoli Altarpiece in new and beautiful ways. Finally, human love and other emotions jump off the canvases of Filippo Lippi in his touchingly intimate representations of the Virgin Mary.

Chances are your other main art stop in Florence is the Accademia to see Michelangelo’s David, but don’t make the mistake of thinking that after that you have “done” Michelangelo. He only has one painting in the Uffizi but it’s extraordinary. 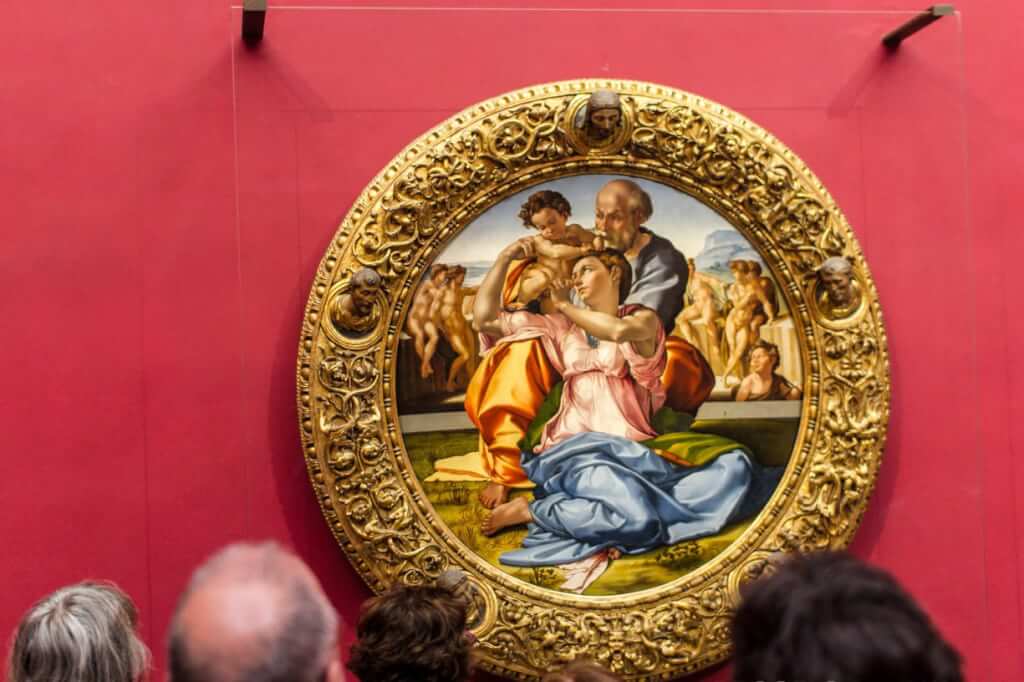 The Doni Tondo is a tempera painting of the holy family which is not only one of the masterworks from the 16th century, it helped lay the foundations for the entire mannerist painting movement which featured explosive colors and contorted poses that showed off the human figure. Looking at it today, the colors are so vivid and the expressions so natural it’s hard to believe that it was painted over 500 years ago.

The Medici’s collection of Raphael’s work is the largest in the world and its spread across the Uffizi galleries and the Piti Palace. The crowning achievement from the time in his life that Raphael actually spent in Florence is Madonna of the Goldfinch, which underwent an extensive restoration in 2008 and is now back and better than ever.

The great artist, inventor and polymath was a Florentine through and through. In fact, he had a big influence on the young Raphael when that paint came to Florence to study and paint. Both of Leonardo’s works in the Uffizi were painted when he was still a young man.

The first is actually a painting by his master, Verrocchio, which Leonardo simply added an angel to. But what an angel it is. All the other poor angels in the painting pale in comparison. The second painting, The Annunciation, showcases Leonardo’s now canonical painting technique called sfumato which avoids sharp lines in favor of smoky, blurred edges that adds softness and realness to his images once thought impossible.

Sandro Botticellis is a bit of an outlier in the Uffizi pantheon because his work is generally considered to have regressed in his later years due to an association with the fanatical friar Girolamo Savonarola, who famously hosted a big art burning bonfire in Florence in 1497. 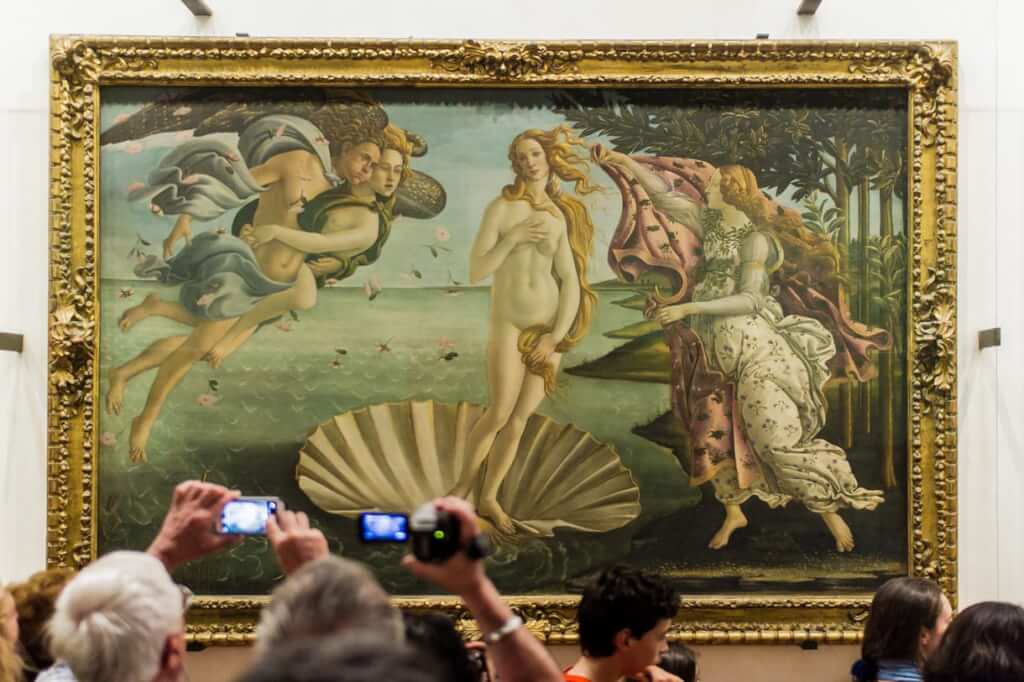 The Birth of Venus by Botticelli.

Boticelli produced two of the most beautiful and enigmatic paintings of the entire Renaissance – The Birth of Venus, and Primavera. Boticelli’s Venus may have been modeled after a married noblewoman with whom he had an unrequieted love interest. If so, we can hardly think of a more fitting tribute.

Though there are many theories, Primavera has thus far resisted all attempts to pin down even basic meanings and symbolisms. What we can discern is the defining confluence of Christianity and ancient pagan philosophy (ie: neoplatonism) that defined much of the artistic currents of the Renaissance.

No one stands out from the late Renaissance period quite like the quintessential bad boy of art – Caravaggio. As troubled in his personal life as he was talented with a brush, Caravaggio brought a level of realism to painting that was thus far unheard of.

Often using poor people and prostitutes for models, he recreated the bible in the image of the poor and downtrodden while reveling in the dichotomies of light and darkness that he seemed to effortlessly evoked with chiaroscuro. Most of the Caravaggio’s in the Uffizi are earlier works from before he had fully developed as a painter, but they have as much impact on the viewer today as they did when they were first painted

Tips for Visiting the Uffizi Gallery

The Uffizi Gallery is open Tuesday through Sunday from 8:15am to 6:50pm. The ticket offices close at 5:30pm and the museum itself starts closing down at 6:30pm.

The museum is closed every Monday, January 1, and December 25.

Full(price) tickets are €20 for any non-EU citizen 18 and over and any EU citizens 25 and over. There is no senior citizen discount.

Reduced tickets are €2 available for EU citizens between 18 and 25 with a valid ID.

You can buy tickets on their website. There is an entrance reservation fee of €4 to book your visit and buy tickets to enter at a specific time.

Groups of school-aged children MUST book their visit ahead of time by contacting the following address: [email protected]

Free entrance is given to anyone under 18 years old regardless of nationality with proper identification, people with certifiable physical disabilities who are accompanied by a family member, ICOM (International Council of Museum) Members, and Journalists with a valid ID showing professional status.

To comply with all national and regional COVID-19 measures (full details here):

There are a few things you are not allowed to bring into the Uffizi.

The Uffizi Gallery is completely wheelchair compatible but there are two things that you need to remember: 1. The wheelchair entrance ramp on the vie della Ninna has a 3cm step in it. 2. If your wheelchair does not fit into the elevator you can exchange it for a wheelchair of the correct size at the entrance.

Unlike the Accademia, you ARE allowed to take photos at the Uffizi galleries. You cannot, however, use flash photography, take photographs or videos using selfie sticks, lightstands, tripods or any kind of professional equipment.

For full details of the rules, please check their website.

The Best Time to Visit the Uffizi Gallery

Along with the Florence Cathedral and the Accademia, the Uffizi is one of the most popular attractions in Florence. Although you can reserve tickets in advance you might still end up waiting to get in because only 900 people are allowed in the building at any one time and the

Door policy is strictly one out one in. The only way to avoid the entrance lines completely is by going with a guided tour.

Florence’s high season usually runs from April straight through to the end of September/middle of October. Because it is something of a Mecca for serious art buffs, arriving early to beat the lines does not always work. The museum itself suggests coming around lunchtime when both entrance lines and crowds in the galleries can be smaller due to people taking a break to eat.