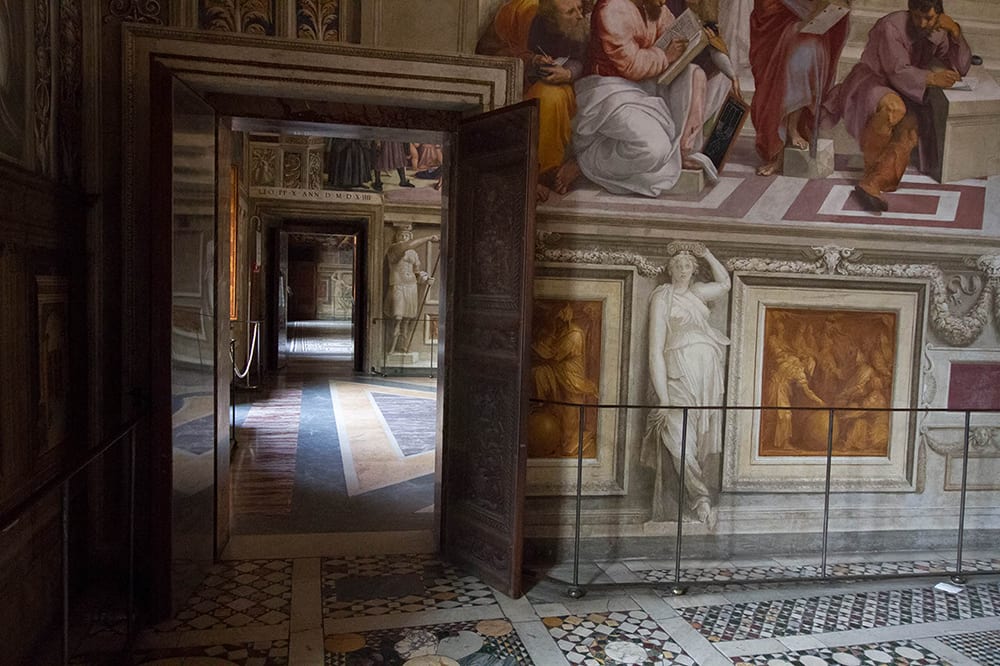 In 1508 Pope Julius II summoned to Rome a prodigious, but untested young artist from the town of Urbino to fresco the inside of what was intended to be his library. His name was Raffaelo Santi or Raffaelo Sanzio, but we know him as Raphael.

Over the better part of the next ten years he (and his workshop) dedicated himself to a series of frescoes in Julius’ apartments that would eventually lend his name to the very rooms he decorated – the Raphael Rooms. Spanning four separate spaces – the Sala di Constantino, the Stanza di Eliodoro, the Stanza della Segnatura, and the Stanza dell’incendio del Borgo – Raphael’s frescoes are considered the artistic pinnacle of the Italian Renaissance alongside Michelangelo’s ceiling in the Sistine Chapel, which was painted at roughly the same time.

Although some of the frescoes are valued more highly than others due to having more or less involvement by Raphael in the actual painting, they are all among the most important paintings in Italy, and indeed the world.

This is the first room Raphael painted and also considered his greatest masterpiece. It includes 3 frescoes – the School of Athens, the Parnassus, and Disputa, all of which combine to form one of the most jaw-dropping rooms in the Vatican Museums – especially if you can decode all the symbolism packed into each work.

The most famous of the three is the Scuola di Ateni or School of Athens, an incredible fresco that places all of the greatest minds of antiquity into a single, perfectly balanced scene to celebrate the union of science, philosophy, ration, and spirituality. You won’t find a better representation of the perfection of Renaissance form and ideals anywhere in the world. 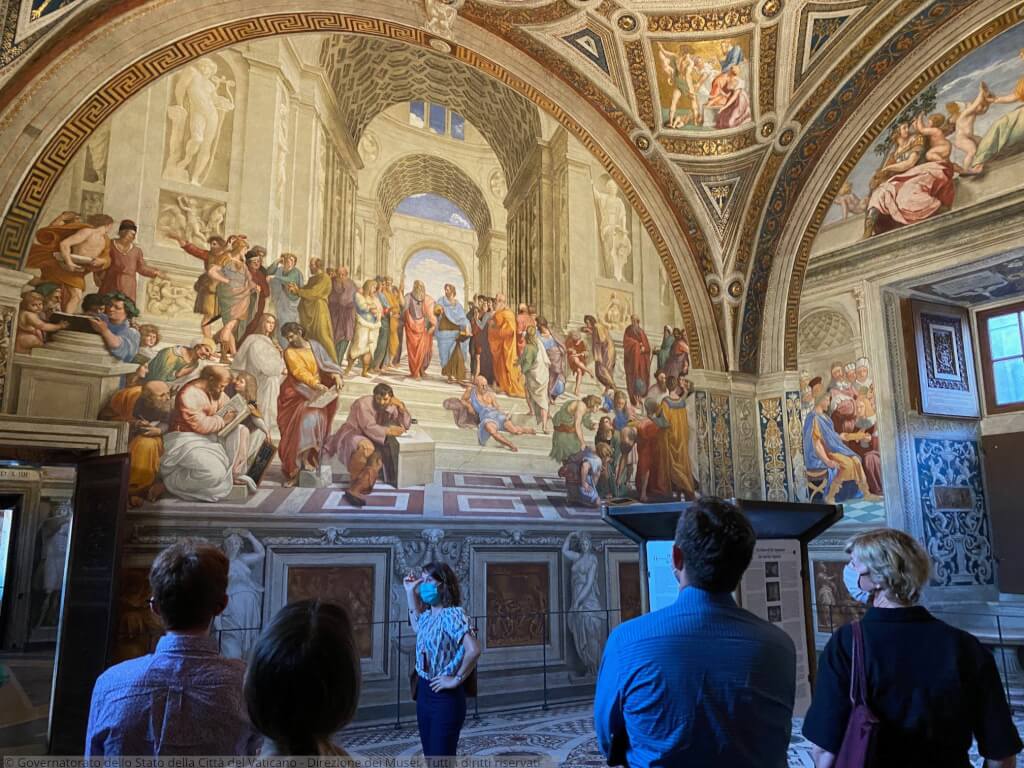 Keep an eye out for familiar faces in this painting – Raphael painted himself in the far right, Leonardo Da Vinci as Plato in the center of the picture, and and Michelangelo as Heraclitus in the bottom. The beauty of the room was immediately recognized in its own time – as soon as it was finished it became the official place for the Pope to sign important documents, hence the name Stanza della Segnatura or “Signature Room.”

In the Room of Heliodorus, Raphael dropped the larger historical perspective and focused on the glorification of the church. Raphael painted four of the scenes from the Old Testament on the ceiling himself, but at this point he was beginning to rely more heavily on his pupils who would use detailed drawings that he made in order to paint “his” work themselves.

This was a widely-used technique among many of the most prolific Renaissance artists. The obvious exception is Michelangelo who maintained no studio and as a consequence, produced much less than artists like Raphael. Keep a look out for Pope Julius. He was nearing the end of his life as Raphael and his team were working on this room but that didn’t stop Raphael from including him in all of the frescoes.

There is a lot more church glofirication in this room but you’ll notice that the figure of the Pope changes. By the time Raphael and his team – to whom he was now entrusting the majority of the work – got started on this third room, Julius II had died and been replaced by the Medici Pope, Leo X. This is why all the Popes represented in these frescoes are named Leo. 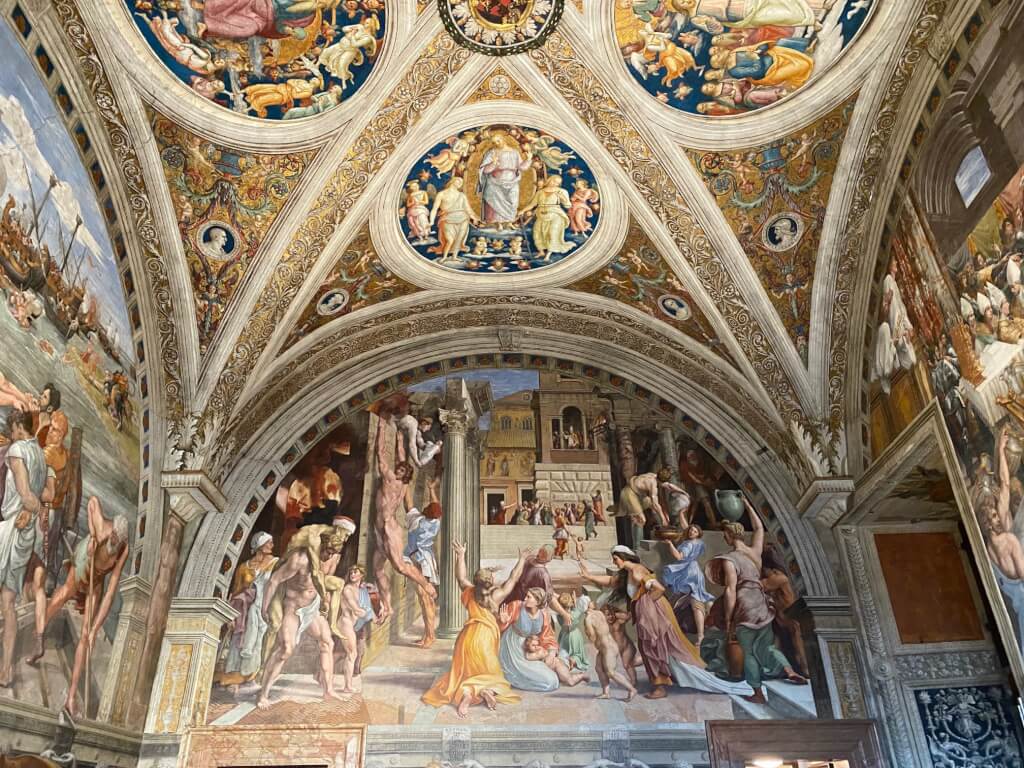 That’s Leo the IV extinguishing the titular fire at the Borgo with little but a stout prayer and again conquering the Saracens in 849. That’s Leo III crowning Charlemagne. One of the (unfortunately) notable points about this room is the inconsistency of the work. Some of the frescoes can stand alongside Raphael’s best but others are clearly of inferior quality.

Speaking of inferior quality, the Constantine Room is probably most famous for being the ugly step sibling of the first three rooms. Raphael died somewhat mysteriously midway through its painting (from a fever) and his work was finished by his students. Although they were working from his drawings, as in earlier rooms, it seems that, without him to look after the details, they were unable to uphold his divine style. The room has come to represent not only the tragically early death of Raphael, but the demise of the High Renaissance that would crumble as an epoch a few years later when Rome was sacked by foreigners.

Tips For Visiting the Raphael’s Rooms

Entry to the Vatican Museums is by obligatory online booking. From November 2nd, 2021:

A small number of tour groups, like our Pristine Sistine tour, are allowed inside before the Vatican opens to the public each day. For the most exclusive Vatican imaginable, join our VIP Vatican Key Master’s Tour: Unlock the Sistine Chapel, where you enter before dawn and travel with the Key Master as he unlocks silent rooms and galleries.

The rules of the Vatican are strict and pretty uncompromising – please familiarise yourself with them before yourvisit. To ensure that visits can take place in the best and safest conditions, please read “Coronavirus” Emergency Modalities, procedures and rules for visits to the Vatican Museums

Note: Beginning Friday 6 August 2021 and until further notice, access to the Vatican Museums and all related areas are permitted only to those in possession of a Green Pass COVID-19 Certificate or equivalent certificate for non-EU countries.

– You aren’t allowed to bring food or drink into the Vatican Museums. If they’re incredibly tasty you can leave them in the cloakroom and collect them at the end of your visit. Any food or drink that goes uncollected will be disposed of at the end of each day.

– You cannot bring any bag, backpack suitcase or container larger that cm 40 x 35 x15 into the Vatican Museums. Similarly, you can’t enter with medium to large umbrellas, any umbrellas with spiked tips, camera tripods, signage (apart from signs used by certified guides) or walking sticks – except those required by disabled visitors. All of these items can be left in the cloakroom.

– Firearms are strictly prohibited for visitors within the Vatican and cannot be checked in the Cloakroom. Knives, scissors and other cutting tools are permitted but must be deposited in the cloakroom as as a precaution against harming the artwork inside. There is solid precedent for this: a deranged man once attacked Michalengelo’s Pietá in St. Peter’s Basílica with a hammer.

– The Vatican Museums are under constant video surveillance and any touching or tampering with artwork is strictly prohibited. Also, no laser pointers.

– All tour groups are required to wear headsets for groups of 11 or more people. The use of microphones or any type of voice amplifiers is prohibited. If it wasn’t, you would literally no be able to hear yourself think inside the Vatican.

– The Vatican has a dress code. Both men and women should wear clothes that cover their shoulders and knees. Occasionally visitors get away with wearing a bit less but it’s best not to risk it. Hats are also not allowed.

– Selfie Sticks are strictly forbidden along with flash photography. However, visitors are allowed to take non-flash photographs anywhere in the Vatican Museums besides the Sistine Chapel.

– If you want to draw anything in the Raphael Rooms you have to get prior permission.

The Best Time to Visit

May through September are usually considered the high season in Rome, with a mini high season around Easter. If you visit the Vatican Museums during these months expect crowds. Regardless of the time of year, the very best time to visit the Vatican Museums is before they open to the general public, although the only way to do this is through select tour groups. Mercifully, the Raphael rooms tend to attract slightly less attention than the Sistine Chapel so, especially if you go early, you will have a chance to see them in relative peace.

If traveling by taxi, make sure to specify to the driver that you are going to the entrance of the the Vatican Museums, (Musei Vaticani) NOT the Basilica of St. Peter (Basilica Papale di San Pietro in Vaticano) which is a 15-minute walk away.

If traveling by metro, take the Metro A line to the Ottaviano stop. As you exit the stop turn left down Via Candia and turn left at Via Tunisi. At the end of the street you’ll reach a set of steps. Climb them and at the top you’ll find yourself at the entrance to the Vatican Museums.

Remember: Unless you are traveling with a guided tour that includes St. Peter’s Basilica, the church isn’t accessible from the Museums. If you want to visit it you will have to exit the Museums, turn right, and follow the wall around to the entrance of St. Peter’s. It’s about a 15-minute walk.