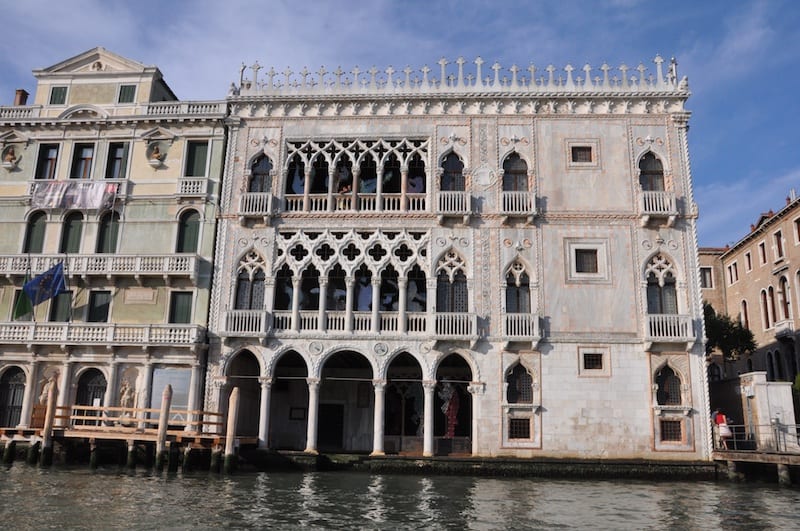 When cruising down the Grand Canal, it’s hard not to notice the many beautiful facades of the Venetian palaces! But the architecture you’re looking at isn’t just lovely — it tells a story unique to Venice.

From their beautiful windows to their tall, elegant facades, every piece of a Venetian palazzo has a reason behind it. Here’s how to “read” the gorgeous architecture of Venice’s finest palaces… and, in the process, understand what Venice is really all about!

One thing to notice when you’re looking at Venice’s architecture in general, with its elegant, pointed arches and lacy details, is just how different it looks from the architecture you see in, say, Rome or Florence. 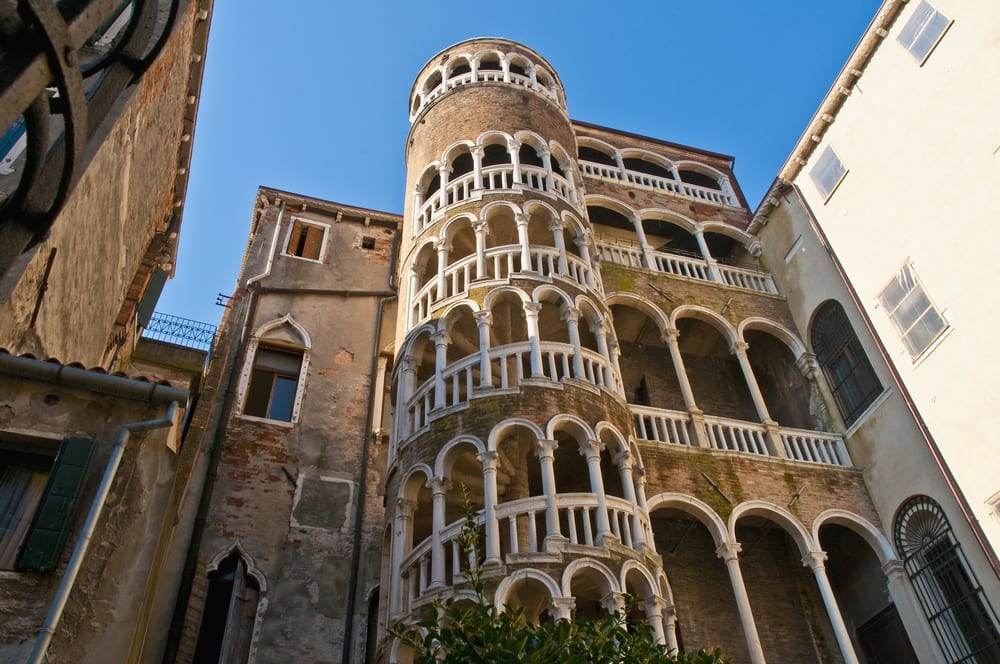 Built at the end of the 15th century, Palazzo Contarini del Bovolo mixes both Gothic and Renaissance styles

Unlike those cities, Venice was at its most prosperous during the Middle Ages. By the 12th century, it was already a powerful and monied republic. And at that time, Gothic-style architecture was the trend. Unsurprisingly, therefore, Venetian architecture became largely Gothic architecture, with its asymmetricality and emphasis on light. After the Renaissance hit, with its focus on rationalism and balance, architects started to incorporate some of its hallmarks (like rounded, rather than pointed, arches). Even so, they’d continue to blend Renaissance innovations with that same Gothic style.

Plus, unlike other Italian cities, Venice had close ties to the East thanks to its vast trade networks. A lot of Venetian architecture, therefore, was taken from Byzantine and Moorish styles. Just check out this photo of the Ca’ d’Oro, one of Venice’s loveliest palaces, built in the early 15th century: You can see the inflected arch above, which likely originally came from the Moors. And on the bottom, you can see the pointed arch, always a hint that what you’re looking at is Gothic.

Meanwhile, the crenellations that you see, topping many of Venice’s palaces like a row of lace, were often seen topping ancient Greek temples—but the ones on the Ca d’Oro have a Moorish style.

When you’re building on water: brick, stucco, wood, and all that glass

Venice’s setting on the water may have made a lot of sense for the mercantile city—but it was also dangerous when it came to building! The area’s land was extremely soft, as well as subject to the tides, meaning that heavy or inflexible materials were very risky. Plus, all that moisture was hard on building materials. 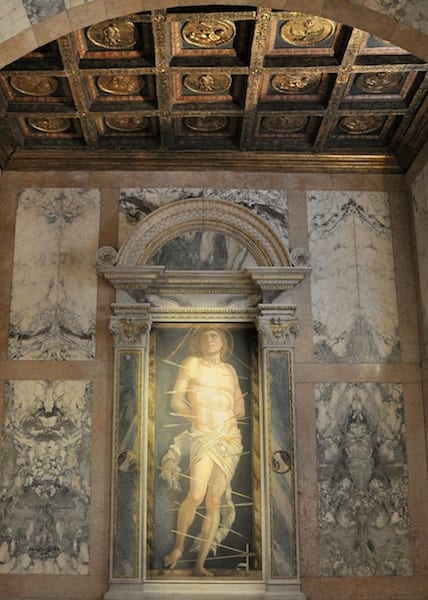 The painted, wooden ceiling of the chapel in the Ca’ d’Oro

One solution was to build in brick. Much lighter than stone, bricks also had the benefit of being smaller and placed side-by-side—so if the earth moved beneath the structure, the building could (to some extent!) shift with it. Plus, bricks don’t retain moisture, always a help in a water-logged city. That brick would then usually be faced with stucco, protecting them even more from the weather.

The problem with having to keep buildings light also led to using a lot of wood. While buildings elsewhere might use stone for their foundations and vaults, for example, Venetians would use the lighter wood. That also explains the painted, wooden-beamed ceilings that you often see in the palaces.

Finally, other Italian cities shied away from using too much glass in their palaces, given its expense and how vulnerable it was to those who might wish the wealthy residents harm. Thanks to Venice’s setting on the lagoon, though, it was very safe from enemies. Meanwhile, the nearby island of Murano had an extensive glass-making industry, meaning that the material was much cheaper than elsewhere. The result? Lots of windows!

One odd characteristic of Venice’s palaces is that they don’t face the streets… the palaces face canals! Of course, since Venice’s canals were its streets, this makes sense. (And keep in mind that many of the streets that you walk on in modern-day Venice didn’t exist for most of Venetian history. When the main train station was built in the 19th century, the city filled in many canals and created piazzas to help out all of the new visitors who didn’t have their own boats!).

(Don’t miss our video on what it’s really like on the water in Venice, below!).

Keeping up with the Joneses 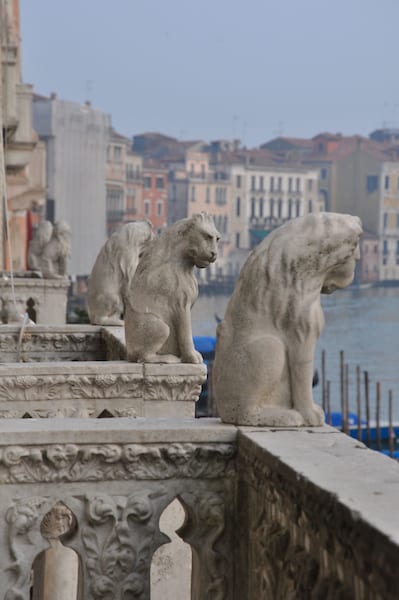 You can’t get much more intricate — or Venetian — than this balcony with its watchful lions!

Because of how many people would see your canal-facing facade, you’d make sure that your facade showed not just style, but wealth. Showing how rich you were was especially important in Venice — since it was a merchant city, money and power were closely intertwined.

At the same time, a noble family’s hands were somewhat tied. To have some architectural cohesion (and to keep people from parading their wealth around too much!), laws restricted ornamental statuary and other over-the-top touches.

But, of course, families got around this. Ornate carvings showed off an (expensive!) artisan’s skill. And, although you had to be careful of using too much of a heavy material like stone or marble, it might be used as an accent and a further display of your wealth. Expensive red porphyry roundels, for example, might stud the facade of your home, and even though it was probably small, your courtyard might use tiles of precious stones. 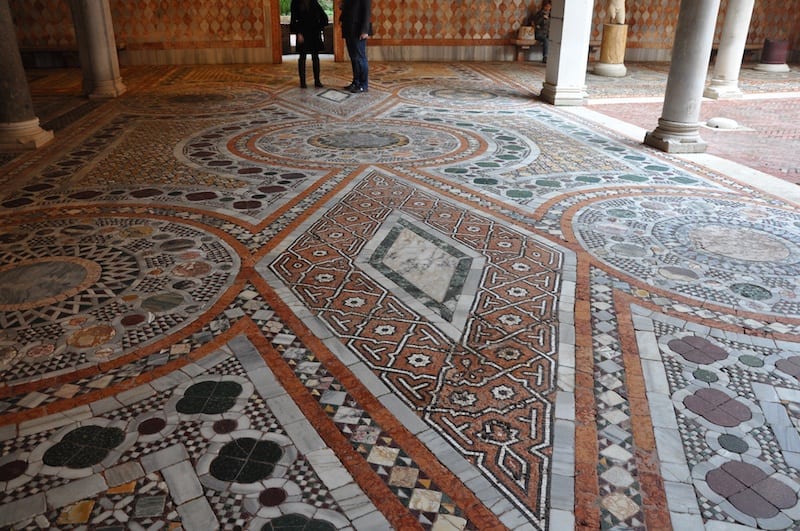 The Ca d’Oro courtyard might not be huge, but it is filled with precious stones

Making use of space

Other architectural features of Venetian palaces often come about for practical reasons — like lack of space. While noble families could build sprawling palaces in cities like Rome and Florence, that Venice was an island meant that land simply… ran out! With space at a premium, even wealthy families had to compensate by building up, not out. Venetian palaces, therefore, usually look tall and elegant, not broad and formidable.

With every inch counting, an expansive courtyard or garden, features of so many palaces elsewhere, was out. Instead, Venetian palaces boasted balconies to allow their residents to get a bit of air. The lack of open space inside could also make the buildings very dark and dreary — so builders opened up the palaces’ facades with big windows, loggias and arcades, letting light into the interior of the house. 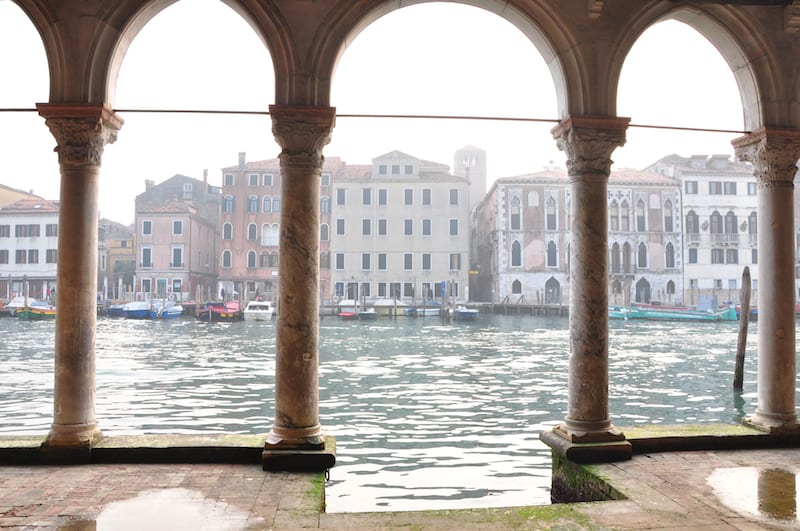 Palaces like the Ca d’Oro were often opened up in the front, letting in light and air

Another way around the lack of land was by building “double palaces.” Instead of every family building their own house, two parts of a noble clan might live in one palazzo, splitting it by each having its own water gate — the reason why you sometimes see two doors onto the water in the same building. 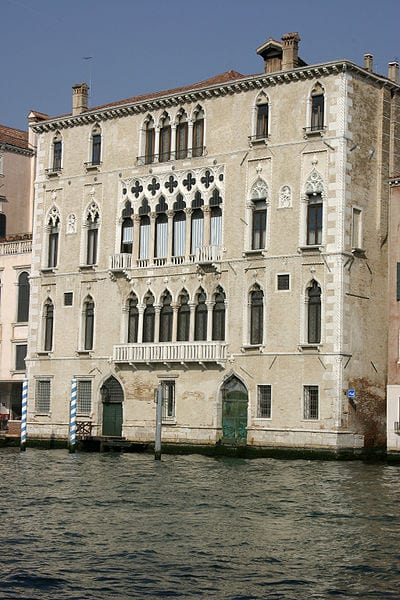 Twin water entrances lead into the Palazzo Bernardo, a way to save space

To top it off: the reason for those big chimneys

One other oddity of Venice’s palaces is that they have big, funny-shaped chimneys, usually in the form of an upside-down cone or pyramid. The reason is simple: Fire was a constant threat in any city, but for a city built on water, it was all the more frightening. Plus, with all of those wooden ceilings and beams, it would spread quickly!

As a result, the chimneys were designed to keep embers from escaping… and lighting that pretty palazzo you’d put so much effort into on fire.

10 responses to “How to “Read” Venice’s Palaces”