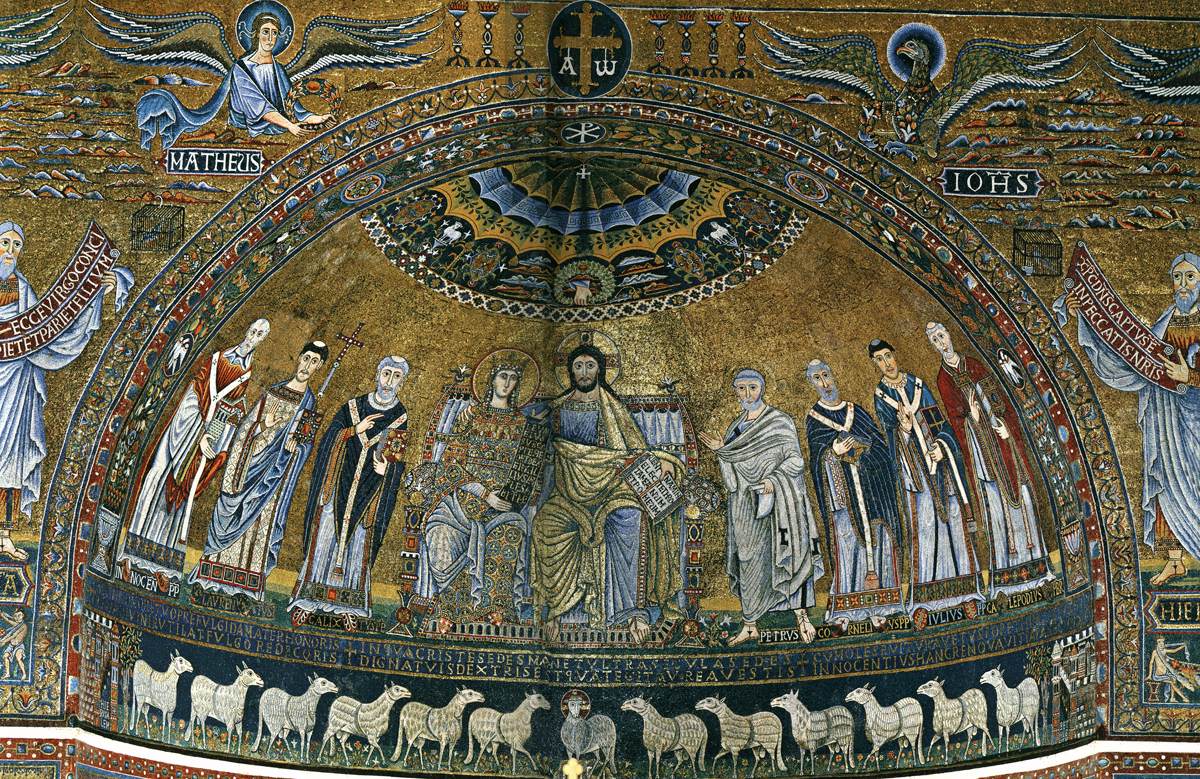 Decoding Early Christian Symbols: How to Read Mosaics in Italy

If you’re visiting Ravenna or Venice, Palermo or Rome, you’ll come across many spectacular Byzantine and early Christian mosaics. Glittering in the light, these mosaics are as beautiful as ever. They’re also filled with early Christian symbols and imagery. That way, even the illiterate—most of the population back in the 6th or 10th centuries!—still would have been able to “read” these mosaics and understand their meanings.

Not equipped with that same knowledge? Since many symbols occur repeatedly in early Christian art, here’s a cheat sheet to help you “decode” Italy’s early Christian and Byzantine mosaics. Bonus: If you’re visiting any early Christian catacombs, you’ll see a lot of these same symbols there, too. (Note that we won’t go into all the Biblical scenes here… that’s for another day!).

Also, remember that the Byzantine artists liked to make it easy for us by labeling the scenes and people. Even if you don’t read Greek, it’s pretty easy to assume that “Matthus” is “Matthew” and “Iordanes” the River Jordan!

Some of the most popular symbols of the time include: The 5th-century “Good Shepherd” mosaic at the Mausoleum of Galla Placidia, Ravenna

Shepherd: The idea of the shepherd as a protector and caregiver was around in pagan Rome. Early Christians adopted the idea as a way to depict Christ, whom they saw as the ultimate caregiver over his Christian “flock.” See it at: the Mausoleum of Galla Placidia in Ravenna, above (5th c.); the Basilica di Sant’Apollinare Nuovo in Ravenna (6th c.).

Lambs and sheep: Christ is often referred to as the “lamb of God,” and his death is often interpreted as a sacrifice for mankind. So it’s common to see him depicted not just as a shepherd, but as a lamb. It’s often with a halo or on a throne and surrounded by 12 sheep—the apostles. See it at: both the apse and triumphal arch mosaics of Santi Cosma e Damiano in Rome (6th c.); the apse mosaic of Santa Cecilia in Trastevere in Rome (9th c.); the apse mosaic of San Clemente in Rome (12th c.).

Lion, ox, eagle and winged man: These are the symbols of the four Evangelists, who wrote the four Gospels of the New Testament. The lion stands for St. Mark, the ox St. Luke, the eagle St. John, and the winged man St. Matthew. See them at: the triumphal arch mosaic of Santa Maria in Trastevere in Rome (12th c.); the interior of St. Mark’s Basilica in Venice (11th-12th c.).

Phoenix: Since the phoenix is a mythological bird that rises from its own ashes, it’s a fitting symbol of the Resurrection, when all the dead rise from their graves, bound for Heaven or hell. Early Christian artists thought so, too! See it at: the apse mosaic of Santi Cosma e Damiano in Rome (6th c.); apse mosaic of Santa Prassede in Rome (9th c.).

Grapes and grapevines in the mosaics at the Mausoleum of Santa Costanza, right when pagan art was transitioning into Christian

Grapes and grapevines: Vines were often used in pagan Roman art, representing the harvest of life. Early Christians added other meanings. For them, the vineyard also meant Israel—and therefore Christians, as well as Jews—or referred to the wine of the Eucharist and Christ’s blood. The idea of the baptized being the harvest was helped by Christ’s quote, “I am the true Vine, you are the branches.” See them at: ambulatory mosaics at Santa Costanza in Rome (4th century).

Peacock: Everyone from Aristotle to St. Augustine claimed that a peacock’s flesh didn’t decay after death. So early Christians used the peacock as a symbol of eternal life. See it at: the ambulatory mosaics at Santa Costanza in Rome (4th century).

Palm branch or tree: Palm fronds were a pagan symbol dating back to ancient Greece; the Romans usually used them to symbolize victory. The palm also was associated with life. So, in early Christian iconography, the palm tree represented either paradise, or a “fruit-bearing” Christian life. See it at: apse mosaic of Santa Prassede in Rome (9th c.); apse mosaic of Santa Cecilia in Rome (9th c.); ceiling mosaic of Arian Baptistery in Ravenna (5th c.); the Basilica di Sant’Apollinare Nuovo in Ravenna (6th c.)

Seven candlesticks: These stood for the seven spirits of God. See them at: the triumphal arch mosaics of Santi Cosma e Damiano in Rome (6th c.); apse mosaic of Santa Maria in Trastevere in Rome (12th c.).

Square versus round “halos”: Round halos, which have pagan origins (ancient Romans often showed their gods or heroes with them), characterize saints. A square halo (more properly called a “nimbus”) was used for “eminent” religious people who were still alive when the mosaic was being done—often the patron of the mosaic. See it at: the apse mosaic of Santa Prassede in Rome (9th c.).

See the figure all the way to the left, holding a church? That’s Pope Innocent II (his name appears beneath his feet), and he was the patron who rebuilt the church—and had this mosaic added—in the 12th century!

11 responses to “Decoding Early Christian Symbols: How to Read Mosaics in Italy”