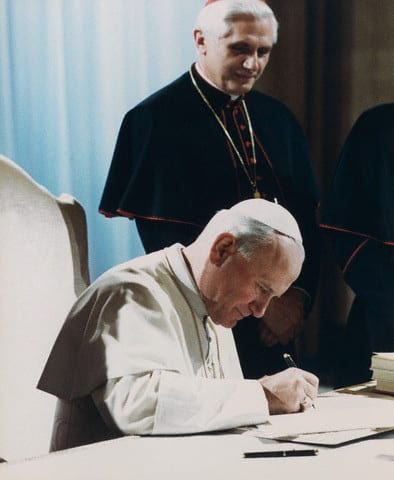 “Beatification” is the step right before sainthood. By beatifying someone, the Church proclaims that the person in question is a) definitely in Heaven, and b) definitely able to plead to God on your behalf if you pray to him. (This is theoretically true for any other Christians in Heaven, too. But beatification is meant to be a rigorous process in order to prove this is the case).

Before you can be beatified, the Church has to investigate and make sure that all of your writings show “purity of doctrine” (i.e., nothing against the faith!) and that all of your actions were motivated by virtue. For Pope John Paul II, that meant that the Church examined the pope’s thousands of pages of writing — from his bestselling books to his encyclical writings. (It’s thought that he was the most prolific pope in all of Church history).

If you pass that test — as Pope John Paul II did — then you can be called “Venerable.” But you’re not beatified yet!

For that level, the Church has to prove also either that you were martyred or that you caused a miracle after your death. After beatification, you’re then called “Blessed.”

Pope John Paul II’s miracle was approved by the Vatican in January. The Church says that, two months after the pope died, a French nun suffering from Parkinson’s and her sisters prayed to him. She was cured. At first, there were some questions about whether the nun’s diagnosis of Parkinson’s had been accurate to begin with.

But after “scrupulous” research, the Vatican wrote, Church-appointed doctors determined that it was and that there was no scientific basis for her sudden cure. On Jan. 11, a session of the cardinals and bishops of the Congregation for the Causes of Saints voted unanimously that the nun’s cure was miraculous. 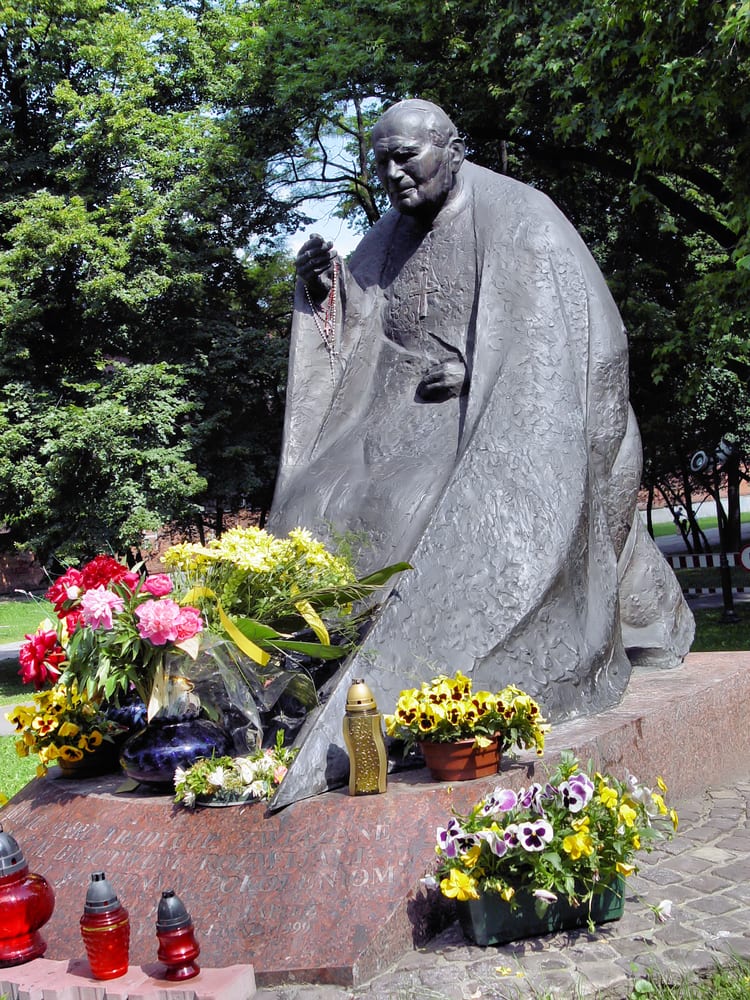 Pope John Paul II: one of the most-loved popes in history.

If one more miracle is attributed to the pope, then he can be made a saint. Interestingly, though, you used to need two miracles for beatification and four for canonization — twice as many! Who made the change? John Paul II.

In debate over whether someone should be made a saint, meanwhile, there’s also a “devil’s advocate” who argues against the case and who has his own special office. But like the requirement for two miracles, John Paul II changed this, too. In 1983, he abolished the 300-year-old office. Instead, someone might be informally asked to serve as “devil’s advocate” during the proceedings. For Mother Teresa, this was Christopher Hitchens.

For the pope himself, this position was taken on by Rev. Giuseppe D’Alonzo, promoter of justice for the Diocese of Rome. But reporters commented early on that even though D’Alonzo said he was neither for nor against beatification, he seemed to hint that he thought the pope deserved it.

Needing more miracles and a devil’s advocate office weren’t the only ways that beatification and canonization used to be more rigorous processes. Before John Paul II, the Church also had to wait for fifty years until after someone died to start considering them for sainthood. That was seen as the necessary amount of time to let grief and excitement over the death cool. 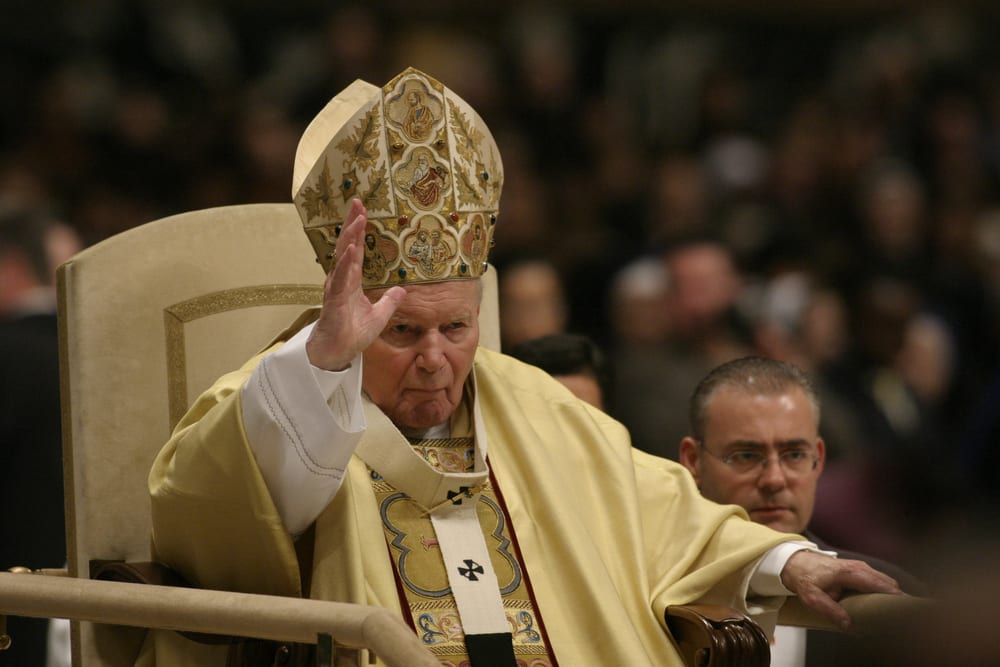 John Paul II himself shortened that 50-year wait time to just five years. And yet John Paul II died on April 2, 2005. Pope Benedict opened the case for his sainthood in… June. Of the same year.

In other words, even the new process was turned topsy-turvy for the Polish pope.

The precedent for not even waiting five years was set by, again, John Paul II himself, who totally waived the requirement to fast-track the canonization of Mother Teresa — the Nobel Peace Prize-winner who ministered to the poor and sick for nearly 50 years. After she died in 1997, the Church launched their investigation. The Vatican recognized a miracle five years later. That miracle was particularly controversial: An Indian woman said that a locket with Mother Teresa’s picture had healed her tumor, but even the woman’s own husband said that the cure came from medicine and doctors, not faith. Still, Mother Teresa was beatified in 2003. If a second miracle is found, then she, too, can be named a saint.

Finally, some people have criticized Pope John Paul II’s beatification for reasons beyond the haste and seeming laxness. It was under John Paul II’s watch, in 2002, that the sex abuse scandals broke. The Church initially gave prosecutors a list of 80 priests who had been accused of abuse. (That was seen as paltry, since it was estimated that at least 250 church workers had probably abused children in the Boston Archdiocese alone).

But when some cardinals wanted to remove any priest from the Church who had ever abused a minor, and said that the police should be told of all sex abuse claims, the Vatican — under the pope’s leadership — balked. Nine years later, that ambiguity continues to haunt the church. And many of its believers.

7 responses to “What Does Being “Beatified” Really Mean?”