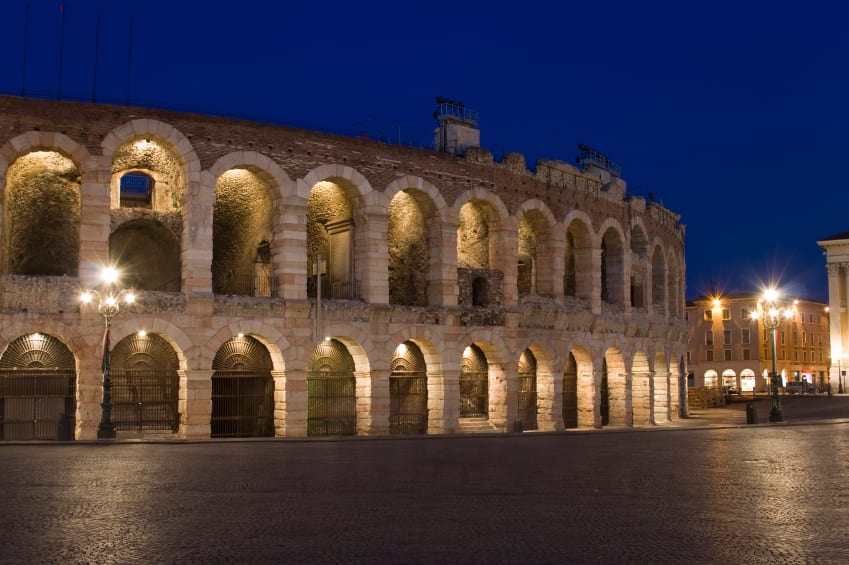 Attending Opera in the Arena of Verona

The setting of the arena is what makes the opera festival so special. Built in 30 A.D., Verona’s arena originally served as a kind of Colosseum. Here was where gladiators fought to the death before the eyes of 30,000 spectators. After the Empire fell, the arena became the scene of jousts, tournaments, and trials. And, like Rome’s Colosseum, Verona’s arena became a quarry. Between the pesky habit of locals to remove materials, and Italy’s predisposition to earthquakes, the arena today isn’t exactly what it would have been in ancient times. But it’s not too far off — and while it’s seen better days, it’s definitely not a ruin. Ever since 1913, the arena has served a new purpose: as the stage for opera performances.

Today, the arena’s lauded as one of the best places to see outdoor opera in the world. That’s not just because it’s atmospheric. It’s also because of the acoustics. One of the toughest things with outdoor performances is the lack of a theater’s usual sound system, but because the arena’s acoustics are so excellent, it works. (That said, of course, the better your seat, the better the sound. And some who have seen the opera from the “cheap seats” have complained they could hear hardly anything).

This year, the opera season kicks off on June 17 with La Traviata. Along with La Traviata, Aida, The Barber of Sevilla, Nabucco, and La Boheme will be performed throughout the summer (the last performance is September 2). The cheapest tickets are just €21 for the unnumbered stone seats at the very top (bring your binoculars… and come early!); for the best seats in the house, expect to pay up to €198. To book tickets, go to www.arena.it.

One more thing: You’re not supposed to take flash photos in the arena, but, of course, everyone does. This can make the show seem like it’s lit by strobe lights… something that, at best, can take a few minutes to get used to. So do your companions a favor: If you have to take a picture, turn off the flash.

4 responses to “Attending Opera in the Arena of Verona”